The combined budget for Town Services, Board of Education, fixed charges and Capital Improvement Projects totals $419,732,246.

Monday night represented the first public hearing on the budget. Jim Lash said there would be ten full days of public hearings in February. 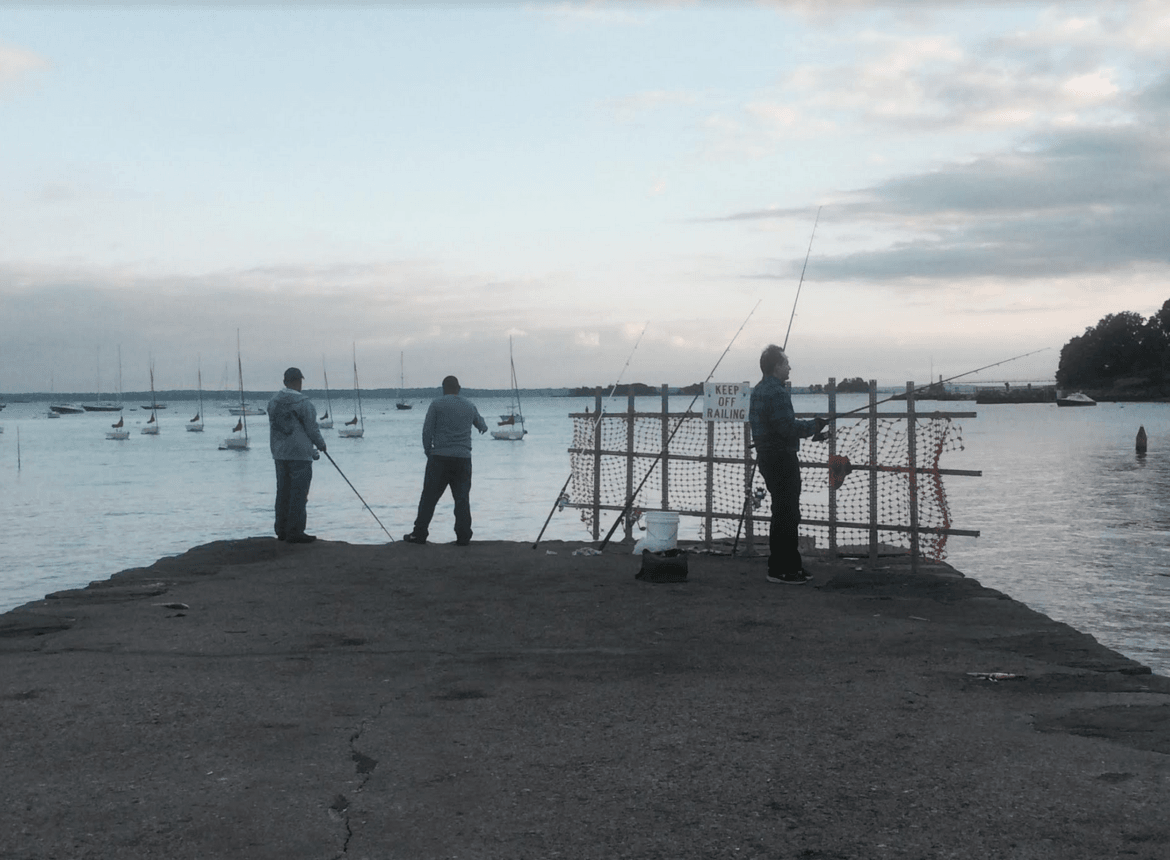 Fishermen at the end of the Steamboat Road pier, where the corner has broken off and a railing has been erected. Photo: Leslie Yager

Steamboat Road Pier
Janet Lockton asked that the BET defer or reject the Dept of Public Works request for $600,000 to repair the pier at the foot of Steamboat Rd.

Lockton said the project had yet to be reviewed by P&Z, and questioned whether the specifications called for handicapped accessibility, which is required for a fishing pier.

“It is a visitor’s delight given the breathtaking panoramic view of the Sound,” she said. But, Lockton added, “The pier is also regularly used by numerous fishermen. Many visitors go unwelcome at the pier, given the number of fishermen with their foreboding long poles and gear, as well as the foul fish smell from the bait and cleaning of fish.”

She said that at 80 ft x 20 ft, the pier is not large enough to accommodate active fishing  and people who simply seek a walk on the pier to behold the views.

She concluded that according to the town municipal code, fishing from the pier is illegal anyway. “No person shall fish except at times and in areas designated by the area dockmaster,” she said, quoting municipal code.

“Will the future use of the pier be a scenic resource adding to openness and community character as described in the POCD, or comply to all the standards for handicapped accessibility as required by federal law for public access fishing piers?” Lockton asked.

Lucia Jansen, Chair of the Budget Overview committee
“Given continued weak revenue, sluggish growth and federal and state funding cuts, it is appreciated that proposed budget has both operating and capital spending decreases,” said Lucia Jansen, who applauded that it included 11 full time equivalent fewer employees. “Unfortunately that kind of productivity improvement is not included in the Board of Education budget,” she said.

“The Board of Education is requesting an increase in 3.9 full time equivalent personnel,” Jansen said. She also questioned whether the school lunch fund requires an increase in the town’s contribution to a new high of $600,000.

Campaign to Combat “Stagnant Real Estate Market”
Jim Aiello, head of first selectman’s economic advisory committee, said, Greenwich hasn’t been proactive with marketing itself. “There was a big statement made last fall by Barry Sternlicht, a Greenwich resident who said to the CNBC, ‘You can’t give away a house in Greenwich.'”

“When this went out, it was the shot heard round the world,” Aiello said. “There was all kinds of social media and because we don’t have a proactive marketing and PR person to respond to it, it lingered without a response.”

He said Greenwich commercial real estate is also lackluster, with nearly an overall 20% vacancy rate, while in the past, the rate has fluctuated between a 5 percent and 7 percent.

“A big part of our employment base is the hedge fund and private equity industry, which is going through a transformation,” he said. “We’re also seeing a lot of interest in this industry going down south, particularly Florida.”

Aiello said that $30,000 would make possible a proactive campaign to lure people in that industry back to Greenwich.

“People talk about how the big mansions are losing value in the back country. But the truth is, it’s in every part of Greenwich. It is in Riverside. It is in middle priced homes. It is in homes below $1 million,” Schoenberg said. “The price dynamic is working across all areas and price ranges.”

Schoenberg said the media environment has changed. “On the internet, when you Google ‘Greenwich, CT, News,’ it is a sea of negative press and there is nobody there to address it in a timely manner, to respond with an alternative point of view.”

Schoenberg said the PR/media effort would be a public-private collaboration, with between $75,000 and $100,000 raised privately, in addition to the $30,000 sought from the town. 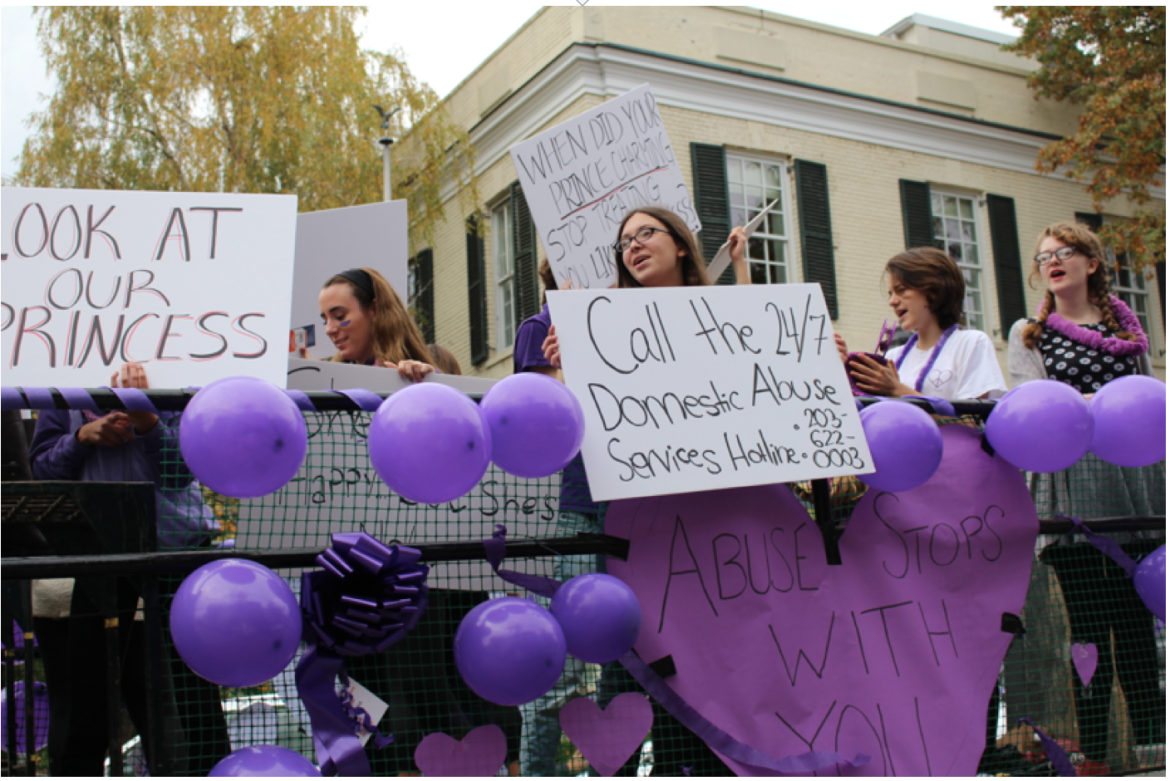 YWCA Greenwich
Mary Lee Kiernan, president and CEO of YWCA of Greenwich noted that domestic abuse and relationship violence is a chronic and widespread problem in Greenwich. Kiernan’s agency has provided age appropriate violence prevention education in Greenwich Public Schools for free for 20 years, starting with YNET at GHS and growing to other other grades and schools.

Violence prevention education is currently provided to 6th and 8th graders at all three middle schools through the Girls Circle  program. There is YNet and there is programming at and the Alternative High School and the BANC program, which is connected to New Lebanon School.

“The YWCA is the only organization in town that provides services to victims of domestic and relationship violence,” Kiernan said. “These  services range from a 24 hour hotline and emergency response counseling to women, girls and children from crisis to recovery. We shelter victims of domestic violence offsite and we provide court advocacy and testimony to our victims at the Stamford Superior Court.”

“I’m continually shocked by how prevalent domestic violence and relationship abuse is in our community. The way to stop the cycle is to get to the students so they learn what a healthy relationship looks like before they become adults,” said Wendy DiChristina, whose daughters have participated in the YNET program.

“I am aware of the funding concerns the town faces, and am aware of the perception in  terms of the town head count,” Marzullo said. But, he said without the Youth Services Coordinator, the town would stand to lose a $21,000 grant.

Marzullo said cost for police to arrest and prosecute misdemeanors would be impacted. “The Juvenile Justice System and Youth Services Bureau are interconnected,” he said. “A child who is mentored and engaged – and given a second chance, sometimes a third chance…they go onto higher education, they are drug free, and it’s because of the youth commission, and services offered.”

Tesei’s Proposed Budget
In making his annual budget presentation to the BET Budget Committee, Mr. Tesei said that the fiscal plan represents an overall 2.55 % decrease in spending from the current 2016-2017 budget of $430,69,944.

“Following the Representative Town Meeting (RTM) vote on the FY16-17 budget last May, Town departments worked to adjust their budgets to account for the approximately $600,000 in reductions,” Tesei said. “Each Department looked carefully at their approved funding and thoughtfully readjusted their budgets to absorb the reductions. In certain instances, there was a corresponding impact on service delivery. This became the new baseline for building the FY17-18 budgets.”

Mr. Tesei referred to the 2016 resident satisfaction survey, conducted in October, which  provided feedback in building the FY17-18 budget. A new survey question asked residents to indicate how they would recommend that the Town reduce spending, if necessary. Mr. Tesesi said that the majority of respondents suggested reducing specific services (48 percent) or making across-the-board cuts to all Town departments (31 percent); 11 percent recommended raising taxes.”

“That in the wake of the RTM budget reductions, the resident satisfaction survey results, and the recent RTM rejection of a negotiated contract settlement, Town Departments and the Town Administration took a critical look at operations and made a concerted effort to reduce the rate of growth in Town spending,” Tesei said. “The result is an operating budget increase of just 1.31%, including contractual salary increases. Town and Board of Education operating budgets are recommended to increase by 0.36% and 2.04%, respectively.”

The 2017-2018 budget reflects a reduction of 12.71 full-time equivalent Town positions and an increase of 3.90 positions for the Board of Education for a total reduction of 8.81 positions over the current fiscal year. These reductions reflect Department Managers and the Town Administration looking carefully at reducing ongoing costs.

New initiatives in Tesei’s budget include:

• Support of the additional transportation costs related to the change in school start times at Greenwich High School for the 2017-2018 school year.

• A request of $18,000 for the Safe Rides program will ensure that the Transportation Association of Greenwich (TAG) will be able to continue to provide this critical program which ensures life safety for our young people.

• A $60,000 request for the YWCA Domestic Abuse Program will support the YWCA’s violence prevention education programs in the Greenwich public school system.

• A $30,000 request for Economic Development Marketing will support a public- private partnership intended to proactively strengthen awareness of Greenwich and the advantages of doing business here.

The recommended Capital Improvement Program includes $40 million in proposals to continue to reinvest in the Town’s infrastructure to improve the quality of life for residents, while advancing critical public safety projects and supporting the Town’s school system.

This $40 million Capital Budget also reflects the stated desires of the Board of Estimate and Taxation and the Representative Town Meeting Budget Overview Committee that Capital spending meet their guidelines. This plan represents a more than 40% decrease in spending.

Among the new projects, are:

• A request for $70,000 for a Town-wide Fire Study which will evaluate staffing and deployment of personnel, response times and facilities.

• A $60,000 request for a feasibility study of Cardinal Stadium that will help create a private/public partnership to provide a modern, handicapped accessible stadium for all sports participants and supporters.

• A request for $3.5 million for the dredging of Binney Park pond. This project has received tentative approval – with final approval expected shortly – from the Connecticut Department of Energy and Environmental Protection and will include the dredging of sediment, the creation of sediment basins and restoration of the pond bank.

Attached, please find First Selectman Tesei’s full letter of transmittal to the BET Budget Committee as well a summary of the departmental budgets.

The BET Budget Committee will begin its review of the budget plan at 9:00 am on Wednesday, February 1, 2017 in the Town Hall Meeting Room. In a letter dated Monday, Jan 30 to the BET Budget committee, Tesei wrote, “Admittedly, there is great anticipation globally as the Nation adjusts to the change in administration. And the State’s growing fiscal crisis continues to put increasing pressure on municipal budgets.”

Tesei went on to say that Connecticut is projecting a $1.5 billion deficit for FY17-18, and has cut funding to municipalities through programs such as Education Cost Sharing (ECS) and Local Capital Improvement Program (LOCIP).

He said State Aid to Greenwich is being reduced by 85.4% from the current year.

“State budget issues also impact local non-profits, which creates additional pressure on municipalities,” Tesei wrote. “For example, stagnant funding from the State to Norwalk Transit District has a direct impact on the reimbursement rates paid to the Transportation Association of Greenwich (TAG); as a result, TAG’s requested funding from the Town for FY17-18 is up 5.3% from the current year.”

“The State is currently discussing efforts to regionalize and consolidate services across municipalities, with some proposals, such as regional health districts, imposing levies on wealthier municipalities. The unfavorable economic environment State-wide is leading to a relocation of businesses and wealthier residents, resulting in a reduction of tax base. Growth in Greenwich’s Grand List has not returned to the rate prior to the recession of 2008-2009. According to a recent Sotheby’s Real Estate Market Summary, ‘The average price for a home in Greenwich is $2,156,344, down from $2,415,442 in 2015. A decade ago in 2006, the average price was $2,663,647.’ We already see nominal growth in our Grand List. As a result of these indicators, members of my Economic Advisory Committee believe we need to more aggressively and actively market Greenwich and all of its positive attributes. I am including a request in this budget for $30,000 to support a public-private partnership to proactively market Greenwich and to grow our revenue base.”

More budget documents, including the draft Capital Improvement Program proposal and Operations Plans for Fiscal 2017-2018, can found at online.