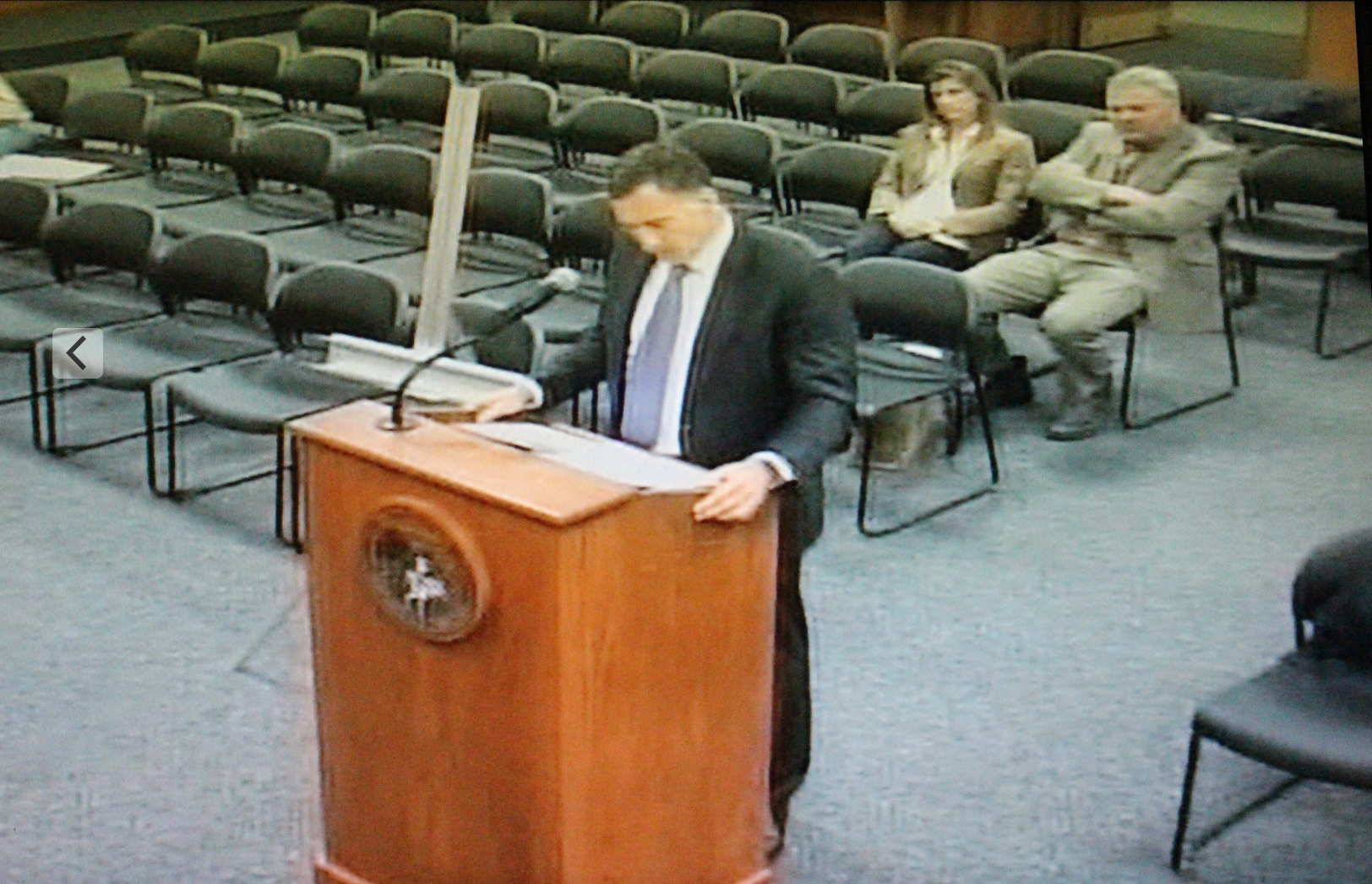 Michael McLaughlin, a neighbor of Sam Bridge Nursery ad Greenhouse, addressed the Planning Zoning commission and spoke out against the Reindeer Festival.

At the Tuesday Nov 28 Planning & Zoning meeting, Tammi Ketler of TMK Sports & Entertainment appealed to the commissioners for a two-week extension of the event permit for the 8th annual Reindeer Festival and Santa’s Village, which this year has moved from McArdle’s to a new location, Sam Bridge Nursery & Greenhouses.

She said the event had previously taken place for 7 years at McArdles on Arch Street, kicking off at Thanksgiving, and running through Christmas eve, on Dec. 24. She said the reindeer will depart for the North Pole on Dec. 23. The carousel and train will be removed after Christmas.

“The goal is to provide a magical holiday experience for the community,” Ketler said.

Katie DeLuca said what was at issue was not an extension, but rather than a change of use from the original site plan and special permit, which is needed in order to continue beyond the 14 days.

Mike McLaughlin, who moved from 124 Birch Lane to 93 Birch Lane 10 years ago, said he opposed the application for a festival on the grounds that it violates at least 8 zoning regulations. His property abuts Sam Bridge.

Additionally, he said, Sam Bridge operates in the RA1 zone under a special exception that limits their activities to commercial, agricultural growing and sales.

McLaughlin said not only did he not want to become a “reindeer hater,” but that there were several violations of zoning regulations.

“It was a comfort to me that the property would simply be used as a commercial grower and greenhouse,” he said of his decision to invest in property at 93 Birch Lane, adding that for good measure he installed a 6 ft high fence and planted 40 mature evergreens along his property line with Sam Bridge.

McLaughlin said he wanted to avoid becoming “a reindeer hater,” but that he objected to the festival because he felt it violated at least 8 zoning regulations.

McLaughin said in 1956 Sam Bridge appealed to the Zoning Board of Appeals (ZBA) for a special exception to use the property in RA1 zone for commercial agricultural uses including commercial nurseries and greenhouses.

He said the neighborhood was zoned RA1 prior Sam Bridge, and that in 1956, there were petitions from neighbors and letters to town hall objecting to the Sam Bridge application to ZBA.

He read aloud one letter from 1956 that he said was representative of neighbors’ concerns at the time:

“So far Greenwich is noted for being well zoned. There are sections of the town for business. They should not be allowed to creep into residential areas, if for one simple reason, the value of all homes in the vicinity will immediately depreciate…. because once one business is permitted, who then can face the argument, ‘If you let that in, why not this?'”

McLaughlin said that back in  Jan 11, 1956,  there was a contentious ZBA public hearing about  the Sam Bridge application for special exception, and that he’d read all 59 pages of the meeting transcript.

“The neighbors voiced their concerns about business creep in the RA1 zone, and saying that if ZBA permitted this business use, how could they be protected from the expansion of business uses in future.

McLaughlin said neighbors had  worried that the business might become a trucking business. The ZBA chair assured neighbors there would be no other business on the property except the commercial agricultural growing and sales, as requested in the application for special exception.

Mr. McLalughin read aloud the remarks of the  ZBA chair, Kenneth Kaufman, back in 1956:  “In order that there is no understanding, this application is granted, but restrictions are applied and will continue as long as the use is the same as was granted. There can be no other use whatsoever.  There will be no chance of a dance hall or a trucking business…”

The special exception came with three conditions: no roadside stand for display or sale of products, no sales on Sundays, and establishing a 100 ft a buffer zone on all sides of adjoining properties.

McLaughlin said predictions of “business creep” have come true since 1956. He said Sam Bridge now sells concrete and ceramic pottery, statuary and fountains, which he said are not permitted. He said they’ve expanded into landscape services, and runs a landscaping supply operation.

P&Z chair Richard Maitland said Mr. McLaughlin’s concerns were independent of the application they were entertaining that night.

He asked Mr. McLaughlin if he had brought his concerns about violations of the special exception to the ZBA, and he replied that he had done so on Nov. 9, when Sam Bridge went to ZBA to ask for removal of condition number 2, operating on Sundays.

The ZBA denied the request for operating on Sundays.

MacLaughlin said that today, the Sam Bridge landscaping business requires a fleet of large trucks, and a massive increase of equipment. “It’s an entirely new business, and, in my opinion, is at least a material intensification of the permitted use by special exception.”

“Times have changed, but Birch Lane residents have received no extra protection,” McLalughlin said.  He said he’d asked Sam Bridge, through his attorney, to relocate his heavy equipment and landscape supply materials to the cemetery side of the property, but was told that would impact their favorable property tax status as a 19 acre farm and forestland.

McLaughlin said coming back to the request to hold 4+ week long commercial festival in RA1 zone. “We can see the commercial expansion  at Sam Bridge Nursery continue. Now it’s in the form of a business arrangement with TMK Sports and Entertainment.”

McLaughlin was in possession of a letter P&Z received on November 14 from TMK, which he said was a week after “a full blown marketing campaign that began all over town without permission.”

He said parts of the letter looked like a copy/paste, because it mentioned McArdle’s rather than Sam Bridge and that TMK in the letter said they expect about 1,800 people over the four week festival.  The letter also said they will also be selling tickets for amusement rides and operating a generator six days a week. In the application, they requested permission to operate seven days a week but were denied by ZBA.

“This event is an overwhelmingly a commercial event. Photo packages start at $29.99 and amusement rides cost $4.00 each or $40 for a packet,” McLaughlin said. “And, from what I can tell, only a small amount if proceeds is going to charity – $5.00 for every wreath sold over $50, and only on Saturday Dec 3 go to charity. And $5.00 for every photo packet sold, but only on Saturday, Dec. 3.”

McLaughlin said TMK runs the reindeer festival in conjunction with the Holiday Stroll, with sponsorship from Pepsi and Mercedes. He said the event was moved from a business zone to the RA1 zone because there was more room and more property, which he said was precisely possible because Sam Bridge has a very low property tax as farm land and forest land.

He said the Greenwich town planner approved the festival on Nov 18, and sent a memo to the zoning enforcement officer and building official, stating that no comments had been received from the public. “That’s not accurate. I have complained on several occasions,” McLaughin said, adding that he’d directed complaints to ZBA on Nov 9,  and by email to zoning enforcement officer on November 14, and to senior planner on November 17.

He said he had received a call from a senior planner explaining that permission had been granted for the festival, on the grounds that it would be similar to others receiving permission – specifically, the St. Roch’s festival in Chickahominy and a Peter Brandt Foundation event.

But McLaughlin pointed out that both are substantially for the benefit of charities and run only for a short period of time.

He said  that when Greenwich Hyatt got approval for a special event tent for several months, that didn’t compare to the reindeer festival. “That was in the GB zone, not RA1 zone.”

He said the Reindeer festival is 4+ weeks long, operated on a property with a special exception and is overwhelmingly a for-profit, commercial event, and his opinion represents at least 8 violations.

McLaughlin said he was worried about traffic, and that the Sam Bridge entrance, on a 40 mph stretch, is busy and awkward. Further, he said that although TMK estimated 1,800 visitors, that  TMK was giving incentives to shoppers at Sam Bridge that they could redeem back in central Greenwich.

As for the generator that powers the two amusement rides, McLaughlin said he could hear the generator noise from his property. “I’m sure you all remember the sound of a generator after the last power outage and it’s not pleasant,” he said.

McLaughlin said he worried that anyone trying to sell a home on Birch Lane would have a problem being adjacent to “a month long carnival.”

Mr. Maitland said it was the ZBA that put the restrictions on the property, not P&Z.

Mrs. Alban agreed the term “festival” was awkward, but that she viewed the event as a promotional event for Sam Bridge, similar to  their hayrides in the fall, as well as other activities for kids.

“I saw this saw this as part of the promotional activity that reaches out to the community. A lot of nurseries do these kinds of things,” she said.

Mrs. DeLuca and Mr. Maitland said Mr. McLaughlin should take his complaints to the ZBA, though he said he already had.

“If it’s an ongoing issue with you, that is who would address that. It’s not us,” Mrs. Alban said. “That part, what they’re doing with the original use, and if it has been changed from the special exception, that’s where you should return (to Zoning Board of Appeals).”

Mr. Bridge approached the planning and zoning commission. He said they do hayrides and a pumpkin patch in the fall, which are all free and open to the public.

“Yes,” Mr. Bridge said, adding that the land at Sam Bridge Nursery has been in the family for over 300 years.

He said the generator is over 200 ft from Mr McLaughlin’s property.

Mr. Maitland said the applicant, Ms. Ketler, would have the last word.

“The purpose of this event is to promote Greenwich, and provide a holiday experience for the families, for the children, and it’s been well received,” Ms. Ketler said. “I often use the words community and commerce. We want to be very respectful to the neighbors and every application permit has been filed and done correctly, with the carousel and train rides.”

Mrs. Alban moved to find the application is neither an intensification nor a change of use, and moved to extend the permit for the additional 14 days. She did note that the ZBA denied the request for Sunday sales. She asked the applicant provide information about noise ordinance compliance.

“If the traffic gets excessive and impacts North Street that the applicant consider getting a flagman or police to manage traffic,” Mrs. Alban said, adding that she had heard from residents that the traffic has been bad.

Greenwich’s Holiday Stroll Has Arrived, Here’s the Schedule of Events