The COVID-19 pandemic has turned the routine of daily life in Greenwich on its head. With schools and non-essential businesses closed, and families self-isolating at home, the financial impacts to the town are only beginning to take shape.

Given the new economic reality, as the BET gets ready to vote on Monday on their proposed $459 million municipal budget for 2020-21, board members say cuts will be necessary.

And so it was in this context that on Sunday at 1:00pm the virtually empty streets of downtown Greenwich suddenly became gridlocked.

Cars streamed onto Field Point Rd in the area of Town Hall, all blaring their horns to protest possible cuts to the schools budget.

Among the drive-by protesters were BOE members Kathleen Stowe and Karen Hirsh, as well as several Greenwich Schools teachers.

Afterward Stowe said, “What an awesome turnout from parents today at Town Hall.  I understand we all need to be financially prudent, and we are good at that since we’ve been doing that for the past few years. The administration is looking hard for cost savings, but cuts of this magnitude directly impact our students.”

Hirsh said, “The strength of our excellent education system contributes directly to the Town’s preeminent reputation. The Board of Education’s operational budget is not built on ‘wants.’ It is truly based on needs of our children.” 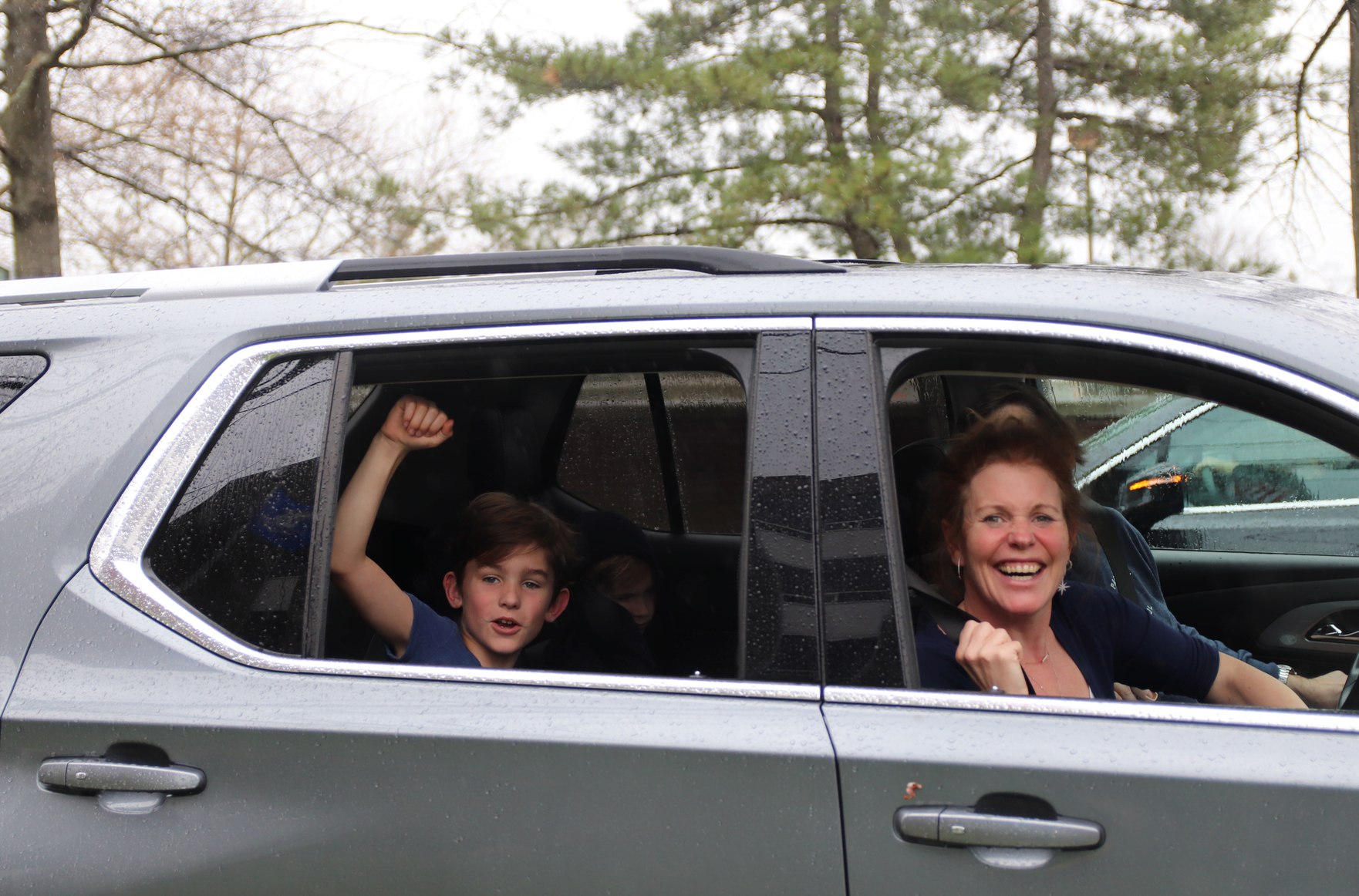 “We are opposed to the $3-5 million the BET has proposed to cut from the public schools. Load up the family on this rainy day and honk in support of a strong public school system in Greenwich,” organizers wrote. “The Superintendent equated it to losing at least 30 teachers. This will have detrimental effects on all children.”

As the rain turned from drizzle to pouring, families looped their cars around the route, holding up signs with messages including, “Quality schools, not granite curbs,” and “Don’t cut educational funding – Our kids cannot afford it.”

Mary Ellen Markowitz’s car had a saying, “Raise my taxes, not my class size.” 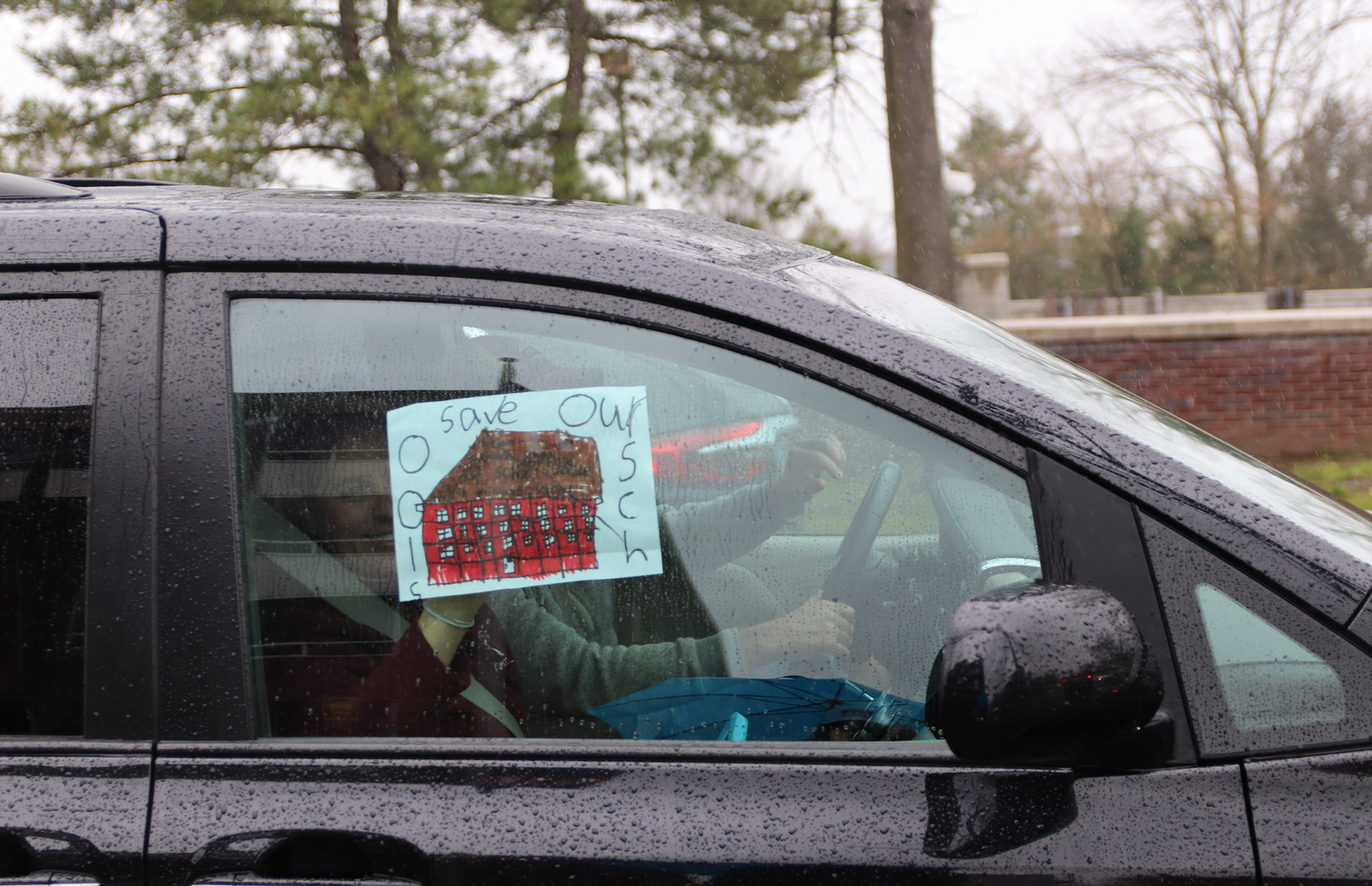 Afterward Kostin explained, “Our children have suffered enormous disruption as a result of this pandemic. When they return to school, it’s my hope that they will be able to resume their studies in a school environment they recognize. I don’t believe that it is possible with cuts totaling $3m proposed by the GOP delegation to our BOE budget. Cuts that deep will ultimately impact the classroom. As a parent that is unacceptable to me.”

Directing cars was organizer Audra O’Donovan, accompanied by her daughter Niamh, a 5th grader at North Mianus School who said she was looking forward to attending Western Middle School in the fall.

Niamh, who said Sunday’s event was her first protest, said she was worried budget cuts would take away extracurricular activities and teacher support.

“They may take away 30 teachers from all the schools – that means 32 students in a class, and then you won’t get any one-on-one time with teachers,” she said.

O’Donovan noted that none of the BET members have children in Greenwich Public Schools.

In an open letter to the BET, parent Katie Yu described the proposed cuts as “outrageous and unconscionable.” She said it was suspicious that last week BET members’ comments on possible cuts came after public comments. And, “at a time when families throughout Greenwich are already overtaxed with trying to keep their families together from a financial, physical, academic and emotional standpoint.”

“At the recent BET meeting, a member commented that these cuts will not have a direct impact on children. Nothing could be further from the truth,” Yu added. ” It is reckless and callous to not consider the human side of these cuts.”

Yu said history has suggest that economic downturns are often followed by an upsurge in public school placements as families choose to move children from private schools to public schools due to financial constraints.

Christine Paris Dodaj sent a message via Facebook saying, “We can economically recover from this. But our children’s education, or lack of, with these suggested cuts will NOT recover.”

Janet Lee McMahon emailed a comment, saying, “As per usual, the Republican caucus on the BET is playing politics with our children’s future. The BOE budget was already underfunded by $1.5M, and an additional $3M cut proposed by the BET Chair Michael Mason would make it downright impossible to maintain the high quality and standards of our schools, as a cut this large would most likely mean cuts to programs, teachers or both.”

“Rather than utilizing our town’s rainy day fund in an appropriate manner, the BET is prioritizing a low mill rate to the detriment of our children and their education. This is not acceptable and a pandemic should not be used as a catch-all scapegoat for it.” – Janet Lee McMahon

The drive-by protest soon appeared on the radar of Greenwich Police.

Officers on scene said the Police Dept had been unaware of plans for a car protest. They said the traffic jam was unsafe because emergency vehicles could not get through.

Eventually police detoured cars from Field Point Rd and the protest broke up.

Monday’s BET meeting, which begins at 9:00am, will not include public input, but residents will be able to watch or call in to the Zoom meeting. 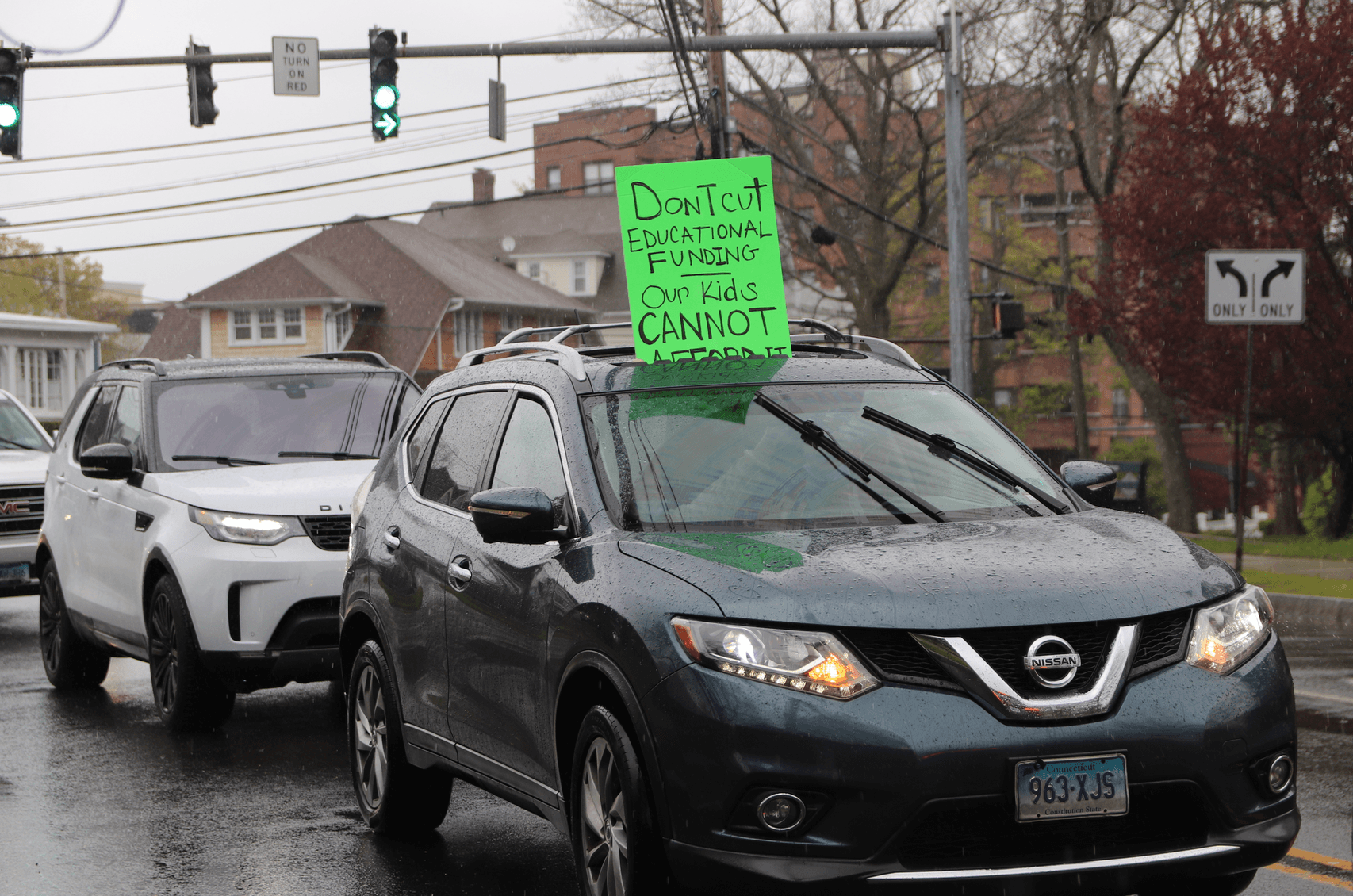 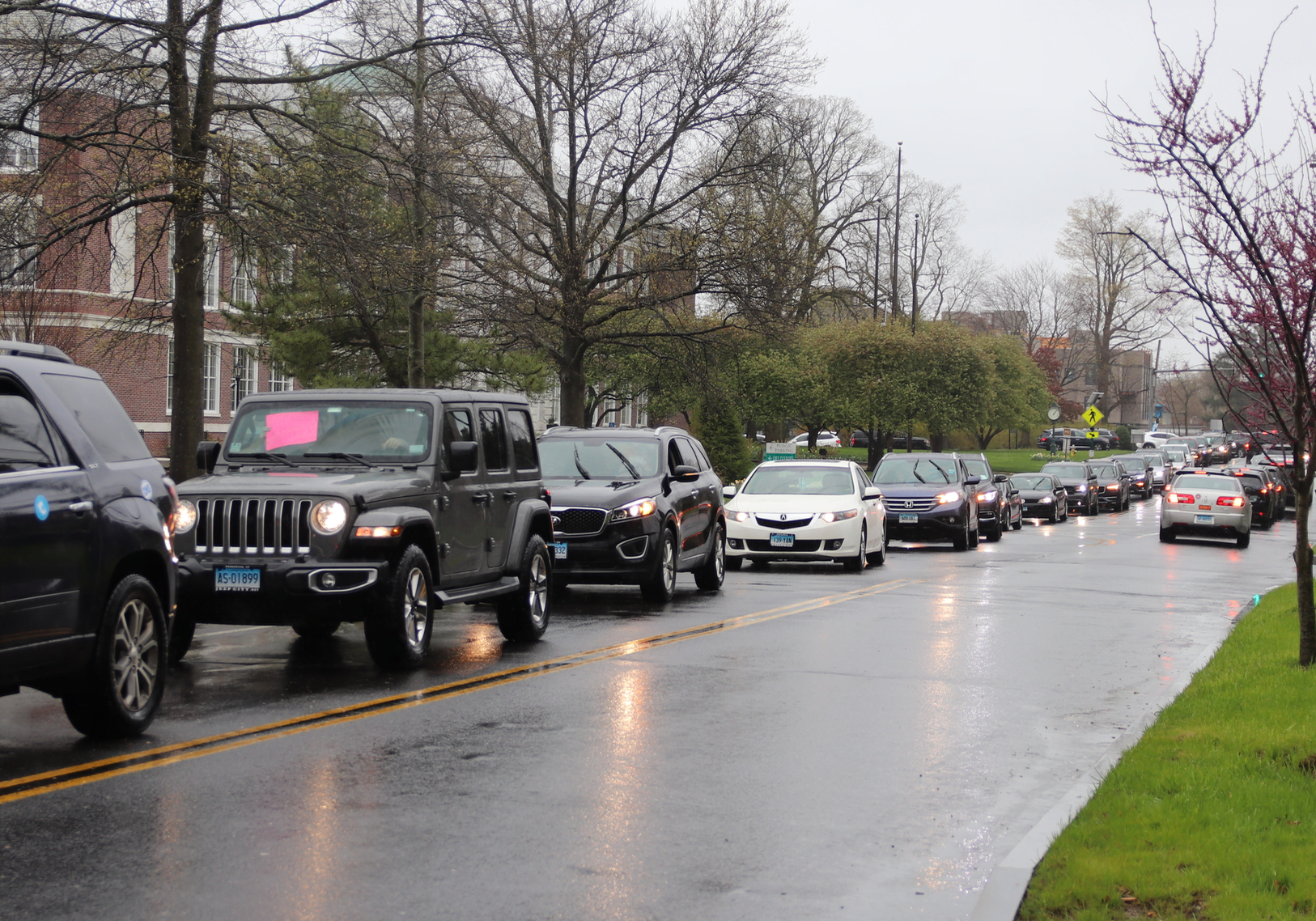 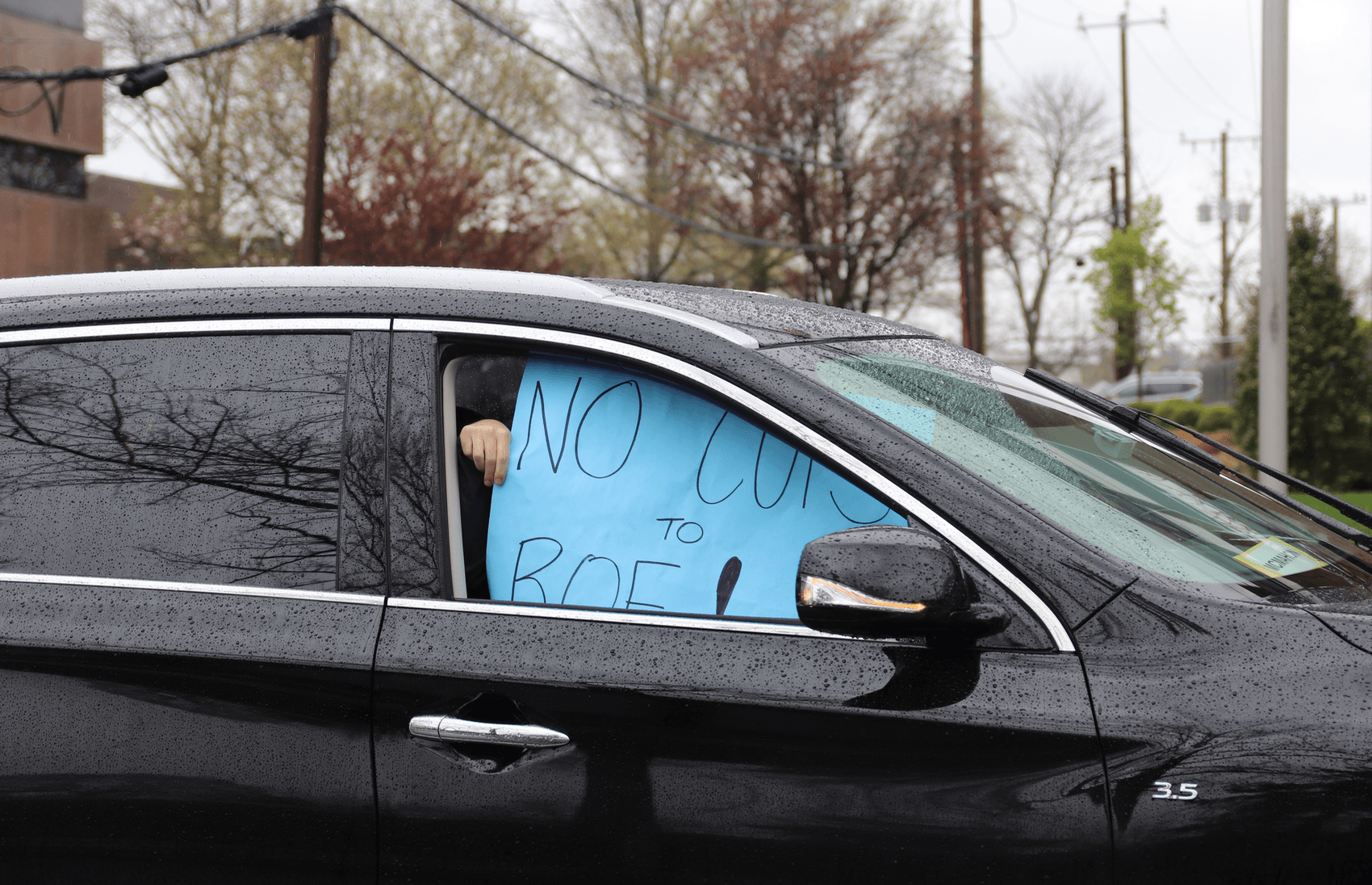 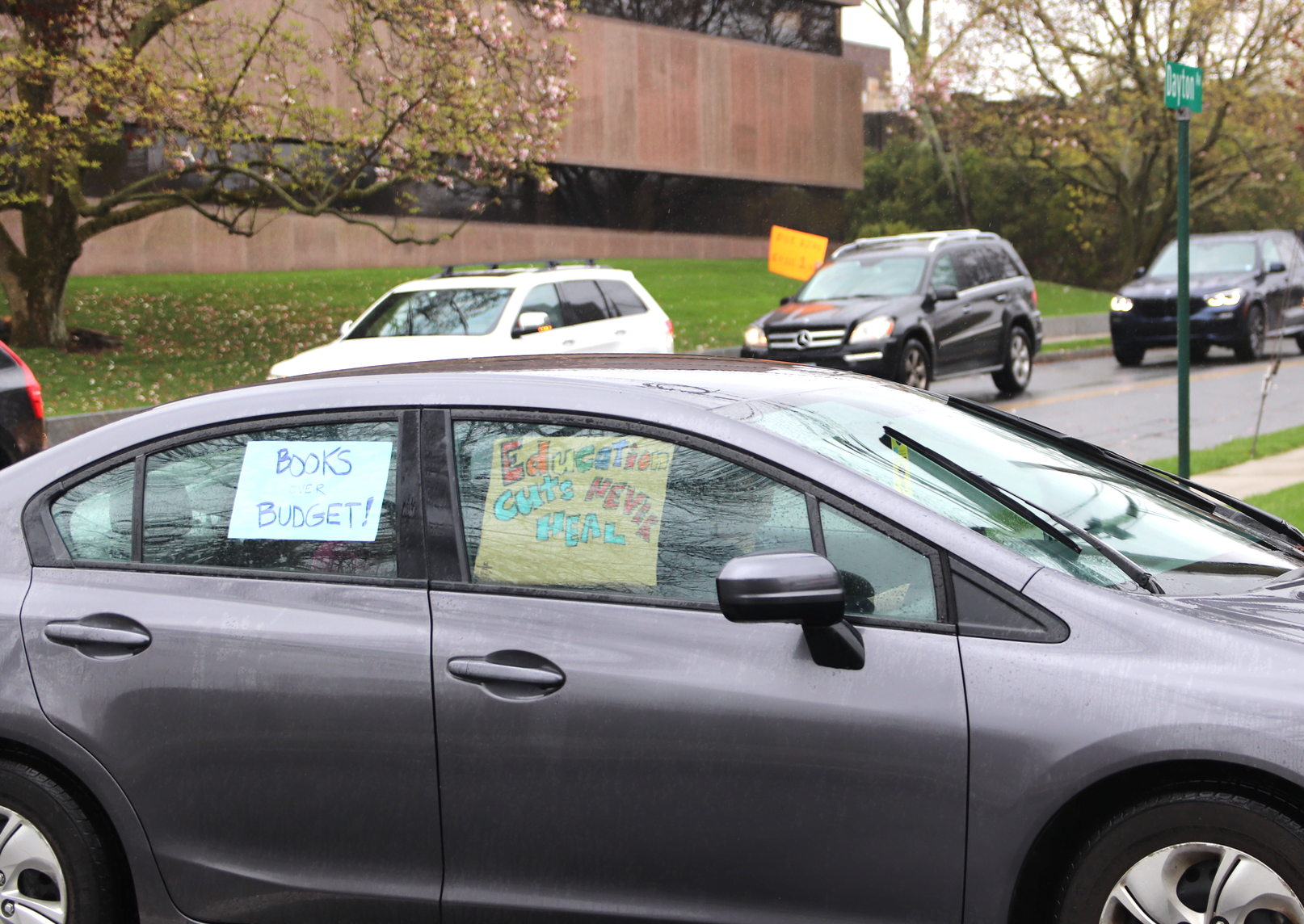 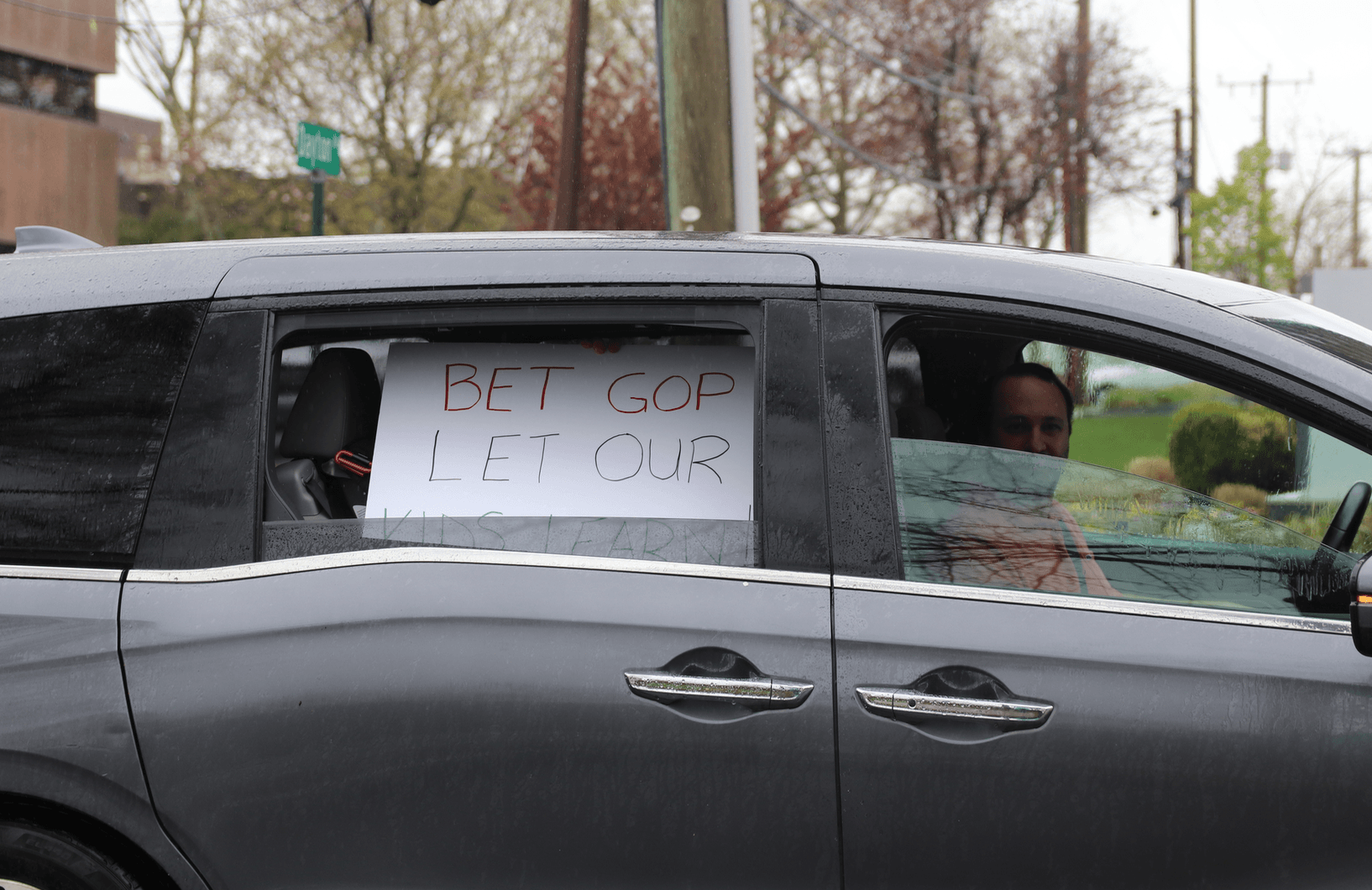 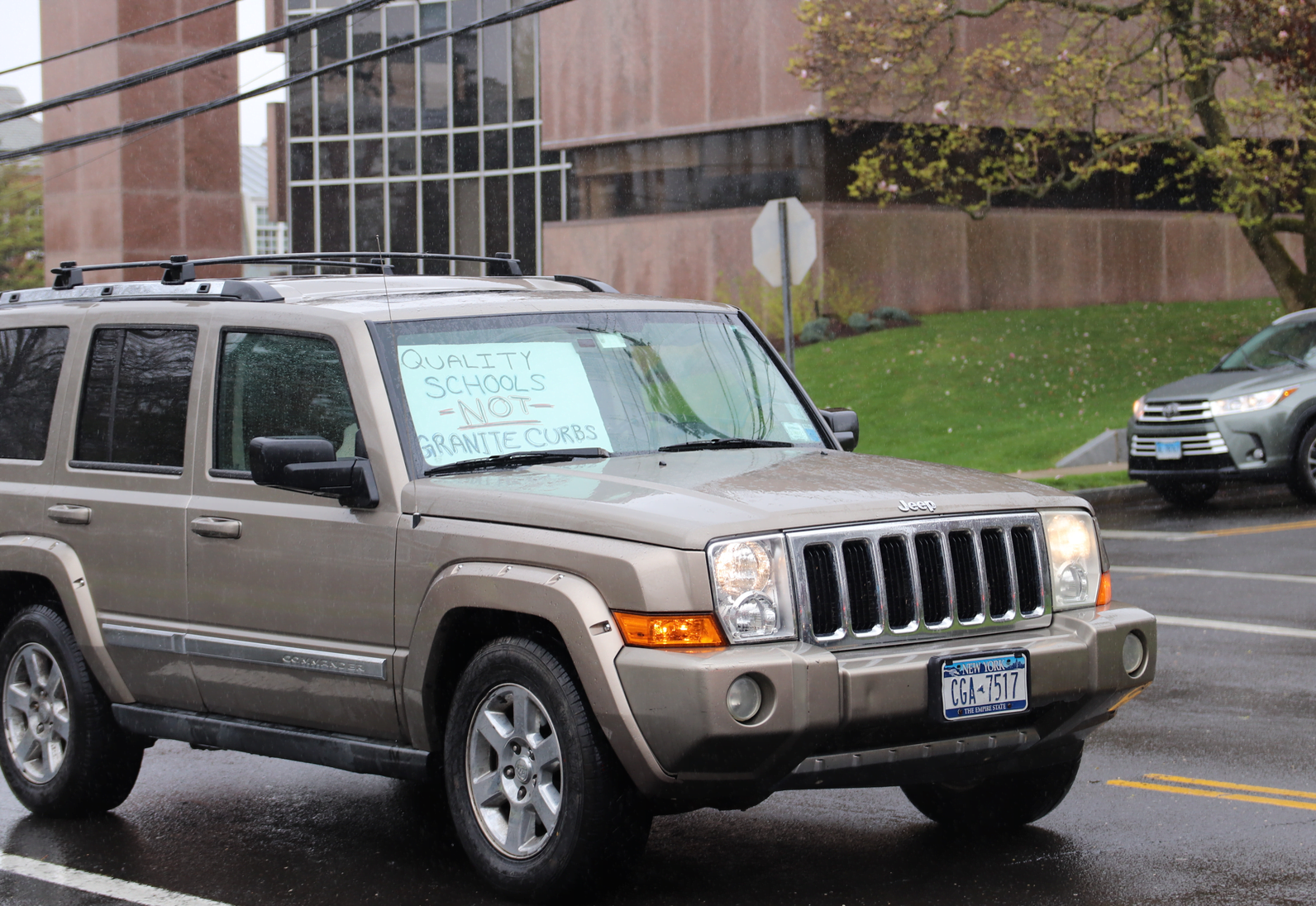 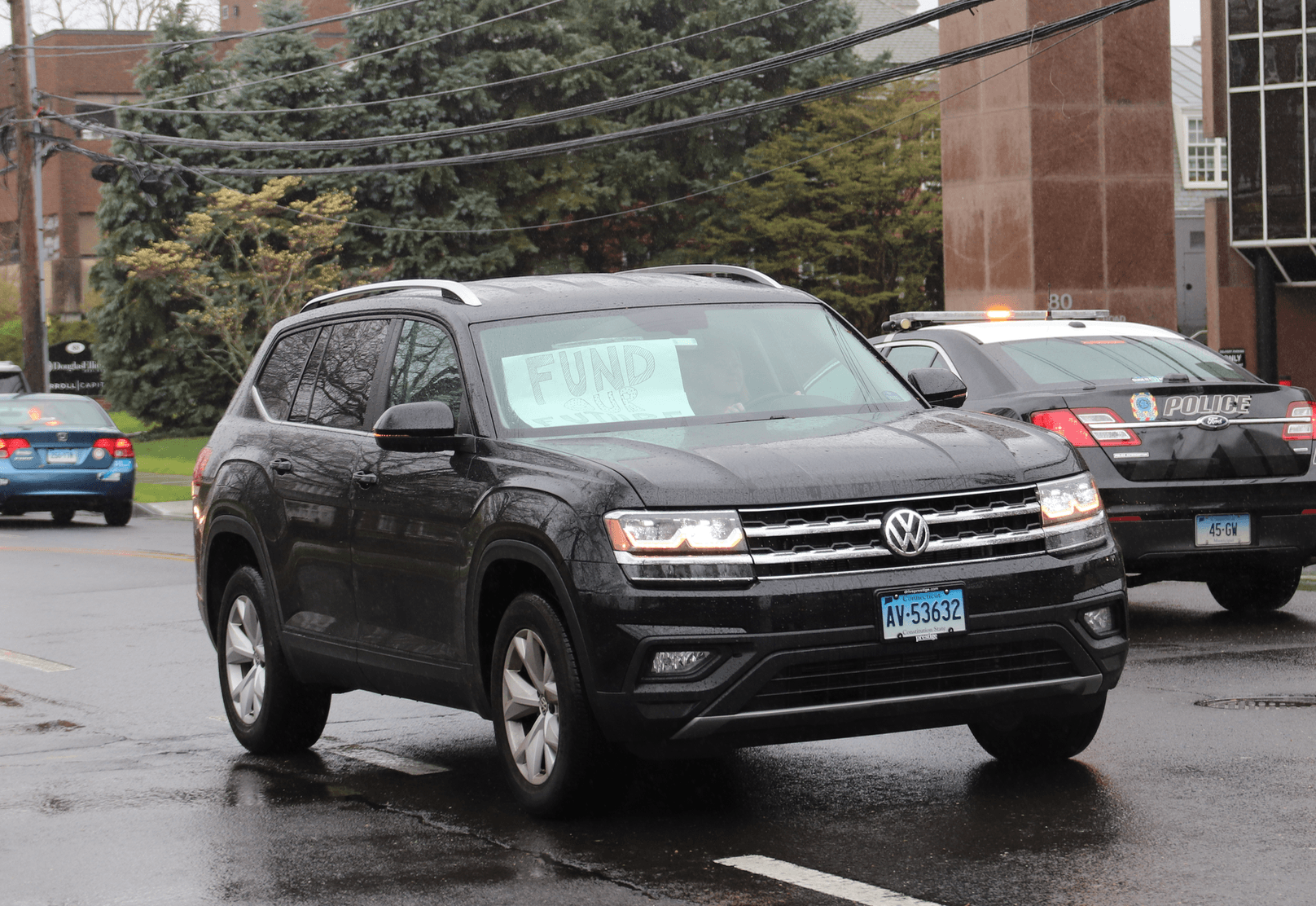 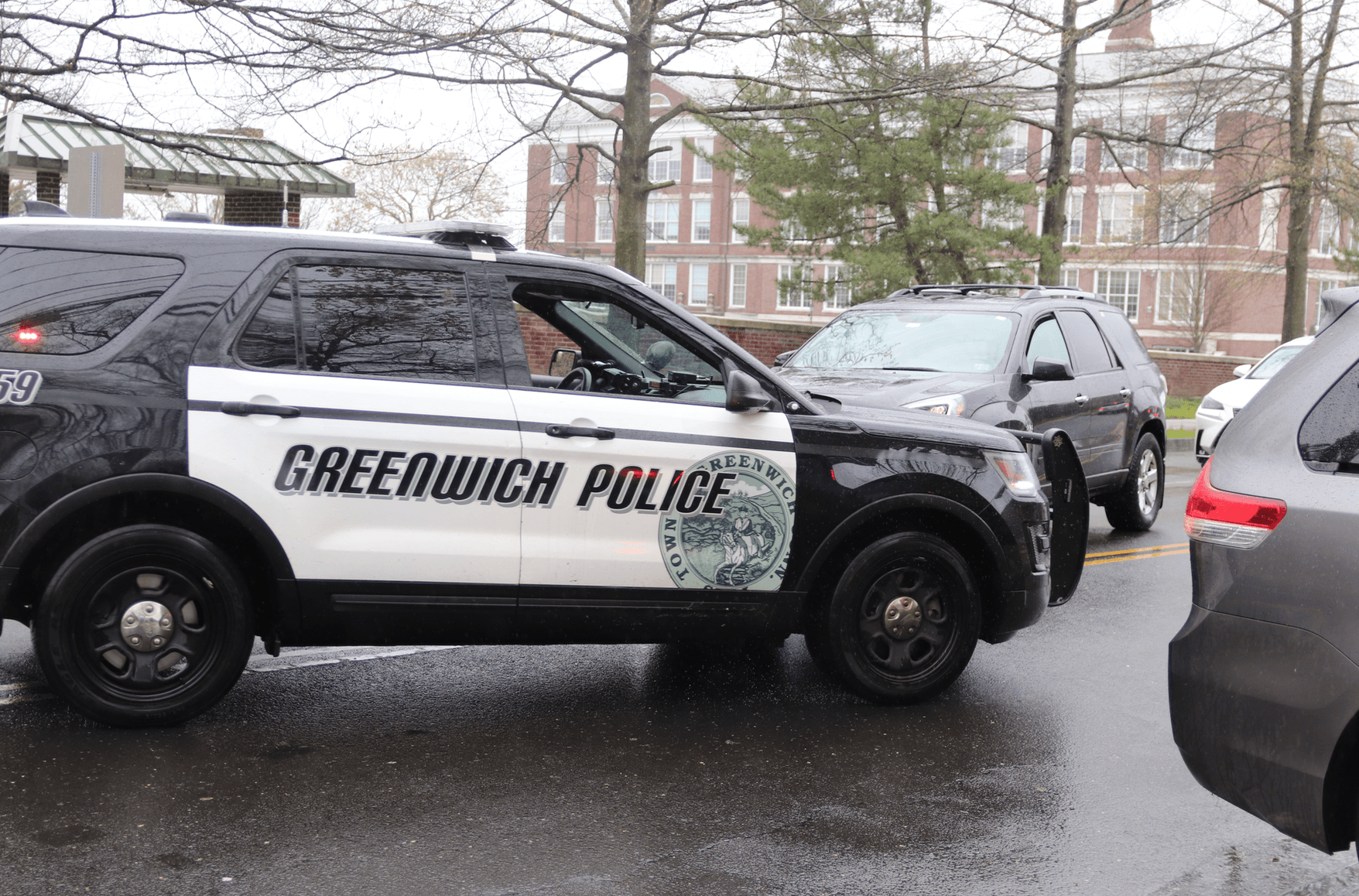 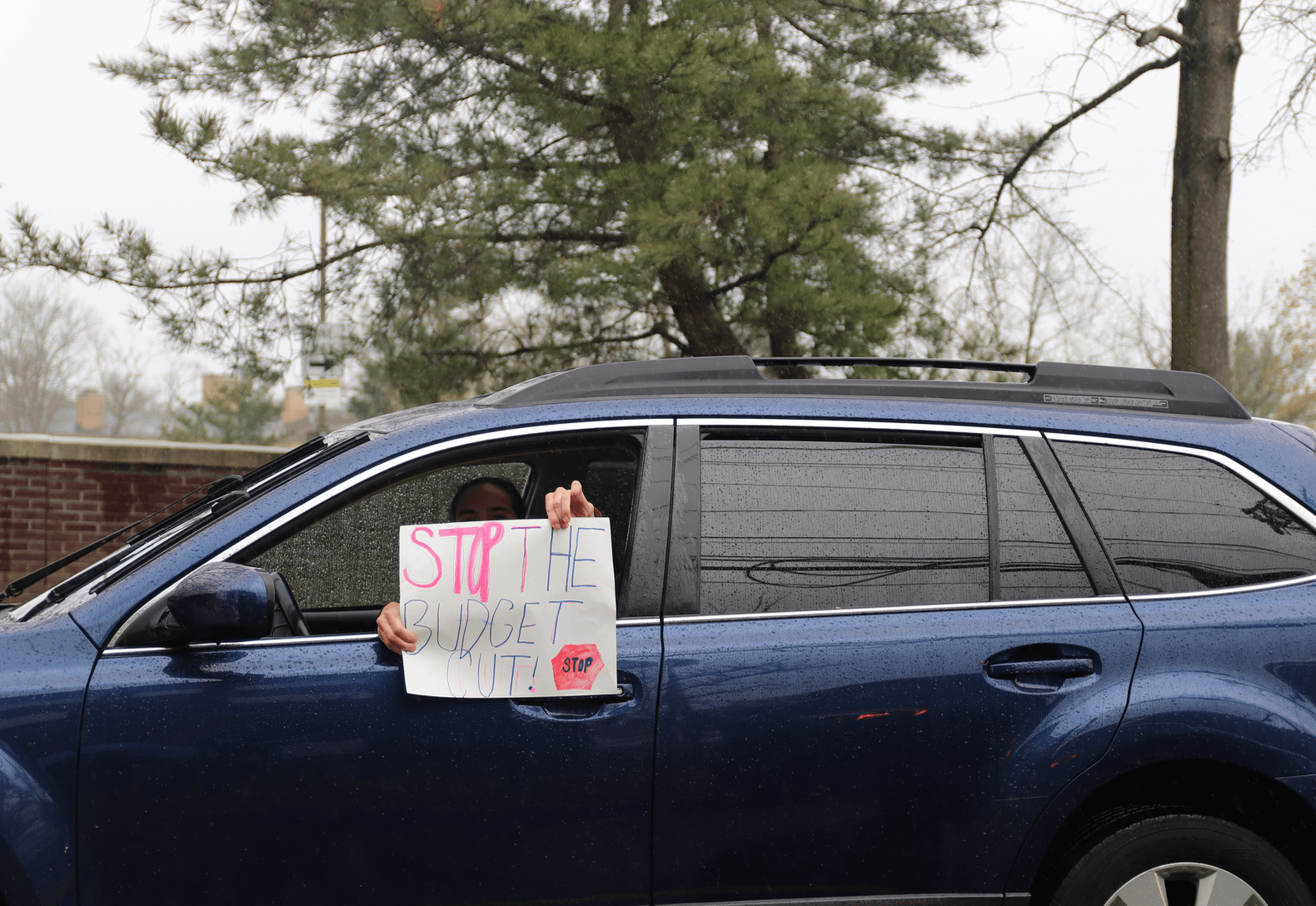 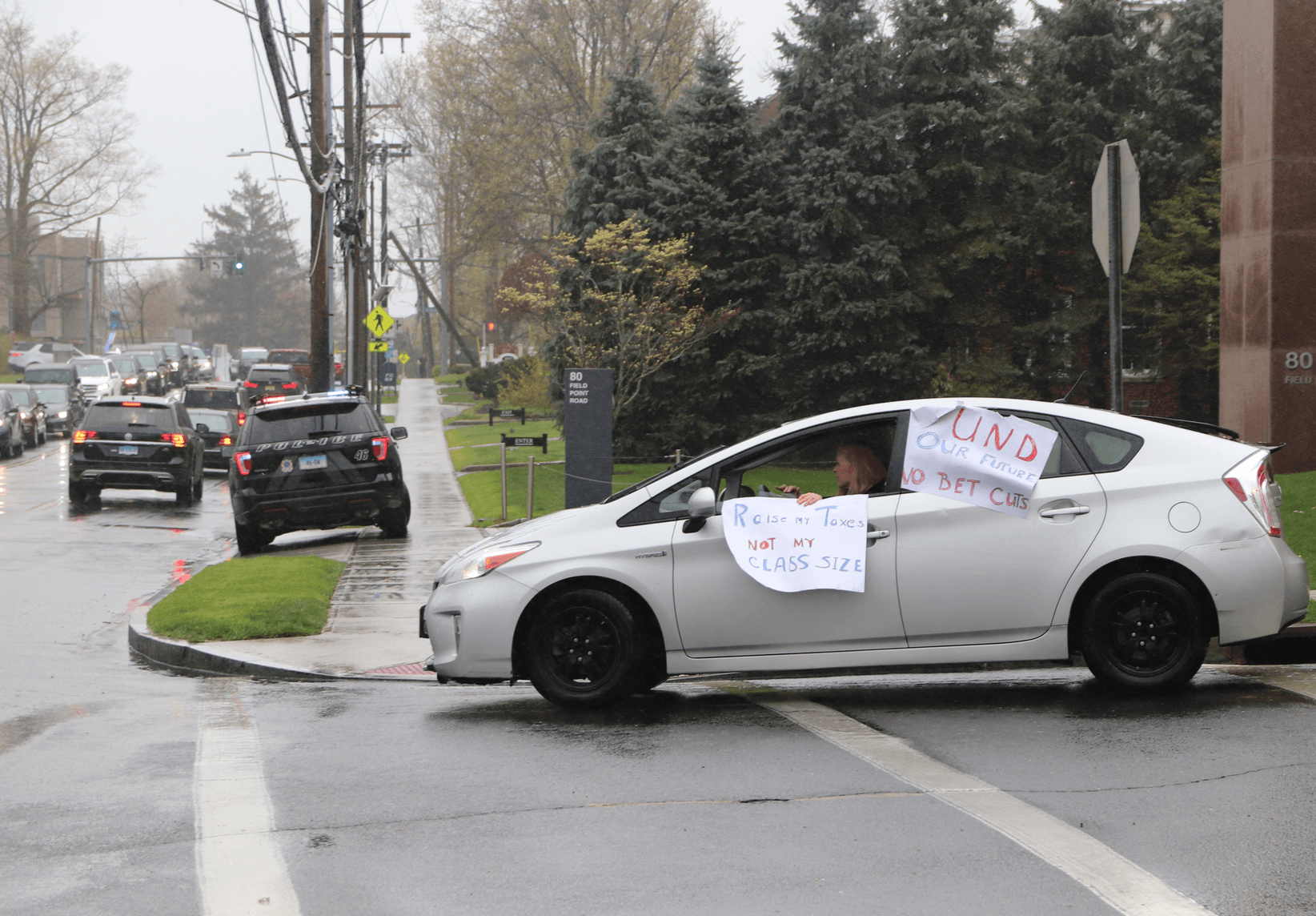