This week Greenwich Parks & Rec chained and padlocked the entrance to the tennis courts at Loughlin Avenue in Cos Cob.

It seems that the mild winter weather has attracted young residents to the courts, but not to play tennis.

The smooth surface of the courts attracts kids who like play catch, skateboard, play hockey or skateboard on the courts after school and on weekends.

RTM member Carl Higbie in District 8 said that although his district is just beyond Loughlin Ave, at least two dozen of his constituents had complained that they’d been reprimanded for recreating on the tennis courts.

“It’s just the regular stuff kids do,” Higbie said on Thursday. “One constituent brought his kid there to ride a tricycle and was told not to. Some kids were hitting tennis balls with hockey sticks. Sometimes people throw a ball to their dog there.”

Higbie said he had written a letter to Parks & Rec director Joe Siciliano saying parks are for youths.

“I received a reply from Susan Snyder (Superintendent of Recreation at Greenwich Parks & Rec) who told me those uses degrade the courts,” Higbie said. “But I’m advising my constituents to use the courts.”

“To hear that an adult, especially one elected to serve on Town government, would encourage the public to break the Town’s rules, is simply sad.” – Sue Snyder, Superintendent of Recreation at Greenwich Parks & Rec

Higbie said he was surprised that this week the Parks & Rec Dept put a chain lock across the entrance to the courts. 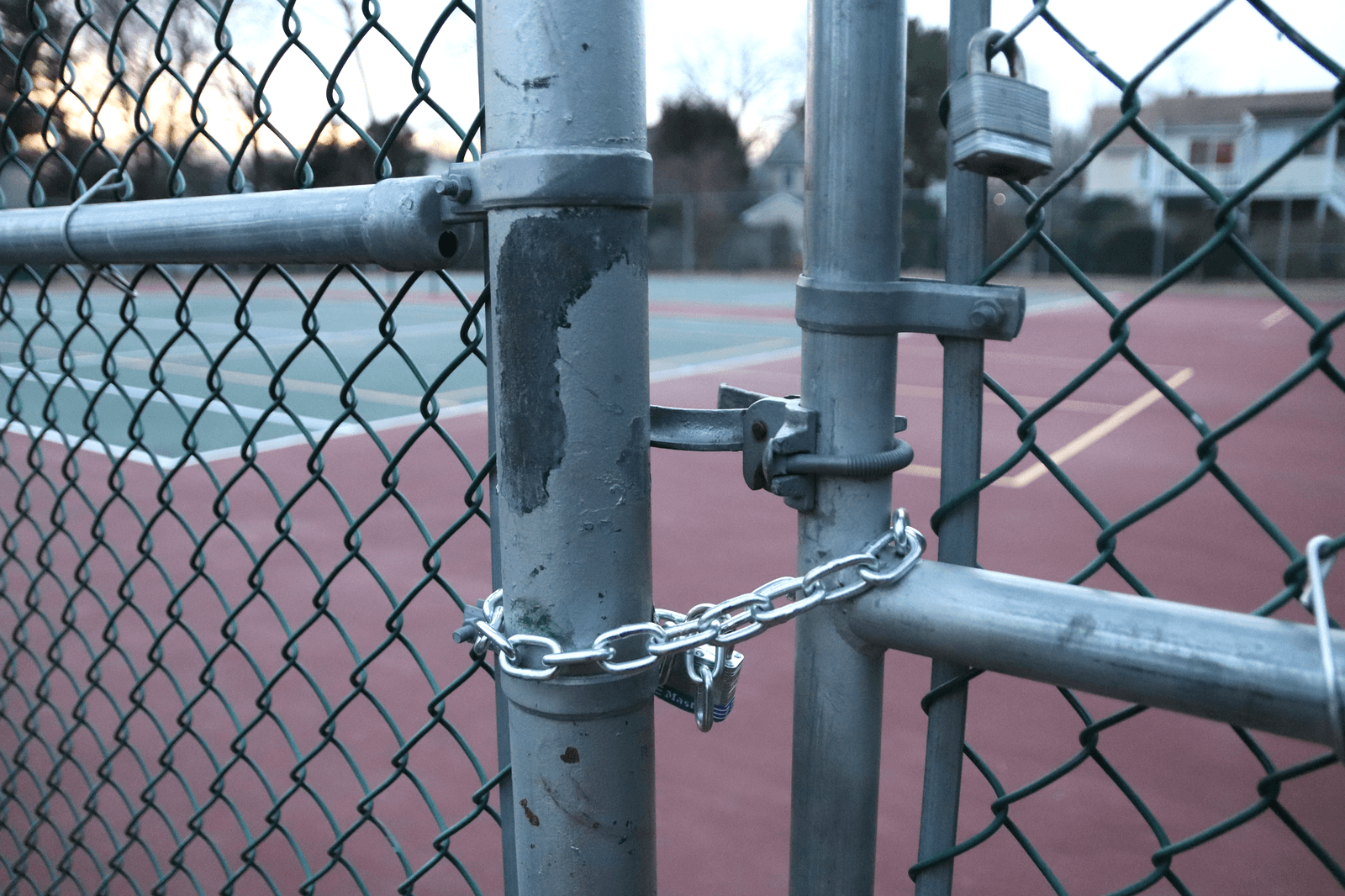 “We own these courts. They work for us,” Higbie said. “And these people have no interest at all in doing what’s right for the community. Our kids are doing things rather than playing Xbox. That’s great.”

Higbie said that since he was elected to the RTM, he’s made it a point to do something for at least one constituent each week.

“I’m helping constituents – whether with parking, turf fields, or Loughlin Ave,” he said. “Their (Parks & Rec) response was to tell the kids to go to Bible Street. You want them to walk a mile with their kids when there is a park right next to their house?”

“Government works us. These are our courts. They don’t even have the rules on the website. A man walking his dog in the park recently took it upon himself to yell at a bunch of kids who were playing on the courts.” – Carl Higbie

Mr. Higbie said recently five kids were throwing a tennis ball around the court when a dog walker yelled at them.

“They said they were scared and came home,” he said.

Snyder emailed Higbie to say, the Parks & Rec Director suggested using the basketball courts at Cos Cob Park or the parking lot at Loughlin Avenue Park for roller blading and other activities.

“It’s less regulated, but it’s the most used. They don’t lock those courts. They don’t say no Frisbee or roller hockey. They also don’t maintain it,” he said to GFP. 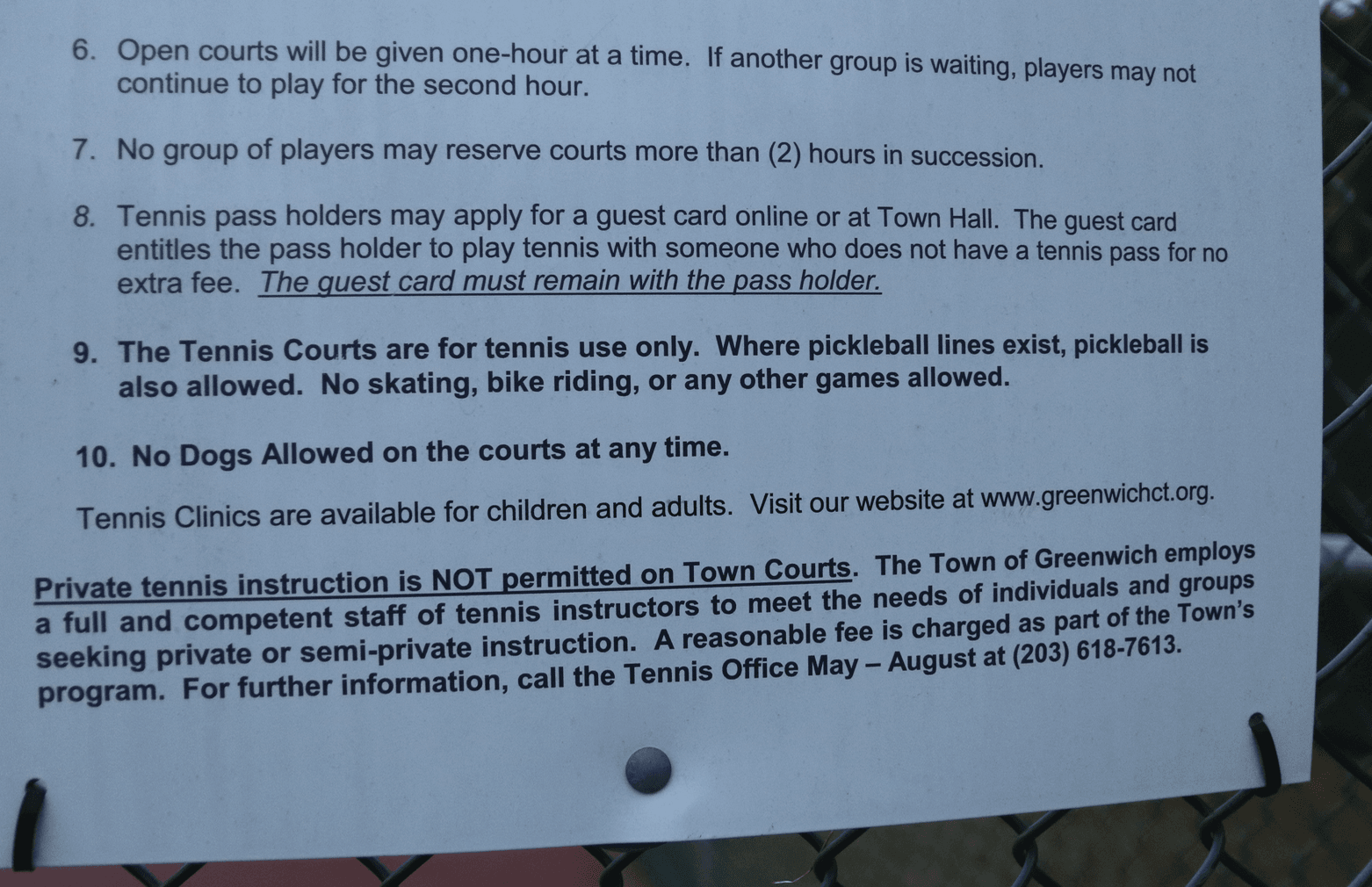 Signage on the entrance to the tennis courts at Loughlin Ave in Cos Cob, which is locked with a chain.

On Friday Sue Snyder replied to a request for comment. Snyder said that the complete rules are clearly posted on the gate at the tennis courts on Loughlin Ave and have been for years.

“The courts at Loughlin Avenue are to be used only for tennis and pickleball,” Snyder added.

She noted that in the past year, the Town of Greenwich spent over $18,000 to resurface and repaint the Loughlin Ave tennis courts.

Snyder said recently Parks & Rec became aware that the courts were being used for activities other than tennis or pickleball and said, “Since the tennis season is over and the nets have been removed, the Department’s Turf Operations Manager decided to lock the courts to protect the Town’s investment.”

“I am responding to you email concerning Loughlin Ave tennis courts. I talked with our tennis court contractor, Hinding Tennis LLC about using the courts for other activities such as rollerblading, roller hockey or skateboarding. They said that those activities could damage the acrylic coatings and would be unadvisable. Each court should have a sign listing the restrictions. We leave Binney Park with two nets and Bruce Park with one over the winter in case the weather allows people to play tennis. We have decided to lock the non- active tennis courts for the winter. We maintain the courts on a consistent basis and following the recommended guidelines for use with allow us to do that.”

Greenwich’s Town Code 7-24 (d) states that no person shall climb, walk, stand or sit upon any tree, monument, fountain, railing, fence or any other equipment, furnishings or structure in a park not designed or customarily used for such purposes.

“It is unfortunate that some refuse to obey the rules,” Snyder said. “However, to hear that an adult, especially one elected to serve on Town government, would encourage the public to break the Town’s rules, is simply sad.”

“The Parks & Recreation Department is hopeful that others will not model this behavior but will respect the rules of the Department and Town, in general,” Snyder added.

Higbie said although the rules are posted on the entrance to the courts, they had not previously been available on the town’s website.

As of this week, the rules have been added to the website.

“The town employees are public servants and if the residents want to use the parks, let them use the parks,” Higbie said. “If the parks need maintenance because of the volume of use, that is a good thing.”