Interviewed Monday in his Greenwich AlphaStrat offices, Republican candidate in the Jan 21 special election for State Rep District 151, Harry Arora shared some of his background and rebutted some of the criticisms directed at him by local media. 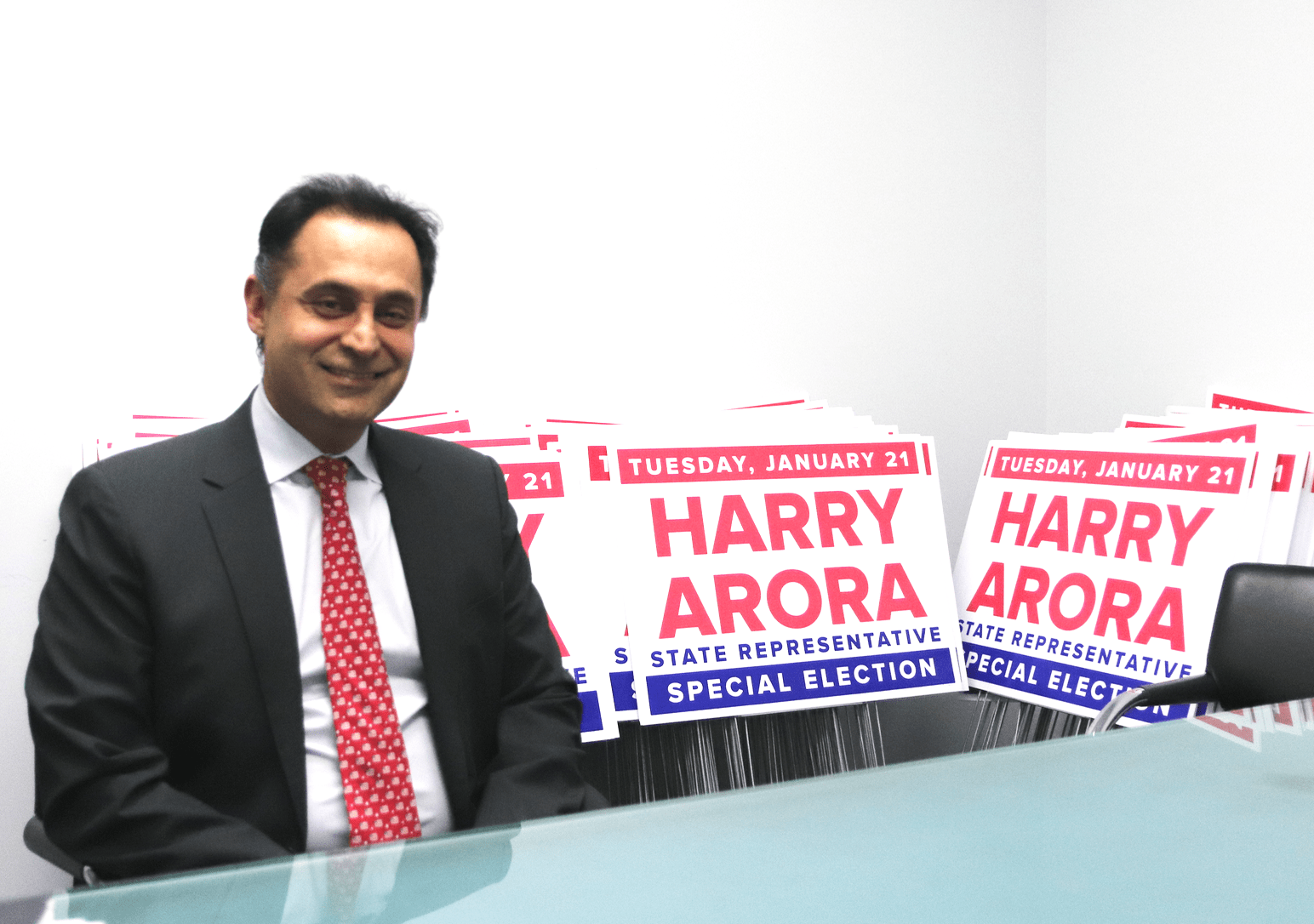 The winner next Tuesday will fill the remainder of Fred Camillo’s term. Camillo resigned after he was elected Greenwich First Selectman on Nov 5, 2019.

Arora hails from India where he said he grew up in a loving family who had very little.

“I came to America with nothing. I came here at 23 for graduate school,” he said, adding that his family encouraged him to focus on education. “From the opportunity I got in this country, and through hard work I have made something of my life.”

Arora said his wife Nisha, who is working on his campaign, is also from India, but grew up in Delaware and New Jersey since the age of 2.

The couple’s children, age 13, 12 and 10, were born in town and attended GCDS before heading to other private schools.

“Greenwich is the only place we’ve called home and we love our community,” he said.

Arora said Connecticut is suffering as a result of bad policy choices over a long time. “I call them self inflicted wounds,” he said.

“I’m a private sector person who has run his business since 2006,” he said, referring to AlphaStrat, a diversified commodities hedge fund he founded in 2006.

“My business has been about policy and how that impacts economies as well as markets,” he said. “What I’ve done in the past five years is to pivot to policy advocacy, understanding policies and how they work for the benefit of the public.”

“When elected I’ll work with leadership to launch a vision for Connecticut, which will bring us back to growth.” – Harry Arora, Republican candidate for State Rep District 151

Arora talked about the concept of growth.

“Communities, states, economies and countries that don’t grow are destined for stagnation and failure,” he said.

He said Connecticut’s path to growth will come from good public policy which, in turn will result in retention of residents and attract both new residents and businesses.

Arora said the new state taxes on, for example, dry cleaning, and excessive “meddlesome” business regulations, come at the expense of growth.

“My opponent and the Democrats in Connecticut have repeatedly said they stand for growth, but most of the polices they’ve pursued over the past decade are antithetical to growth,” he said, using as examples tolls and the now dropped proposal for regionalization of public schools.

That said, during a forum on Channel 12 with Mr. Arora, Ms. Moss indicated she would vote no in a trucks-only tolls vote.

“Truck tolling is going to end up in courts, and the other option, taking money out of the rainy day fund is not a good option. And borrowing more money is definitely not a good option,” she said. “If we do tolling as a way of raising money, we have to do something for our constituents, perhaps lowering sales tax. That way our local residents don’t take the burden of the tolls.”

Arora, in that forum, said, “No to truck only tolls, and no to the wider variety.”

“We spend over $3 billion on transportation every year,” he said, adding that there are many spending items that can be curtailed or taken over by the private sector.

Arora had asked for an opportunity to rebut some letters to the editor and articles in local media, including his declining to participate in a Greenwich League of Women Voters debate unless the moderator, Kay Maxwell acknowledged publicly that she was a registered Democrat.

The LWV balked at the request.

This week Arora said he is overall a strong supporter of the League of Women Voters.

“We need strong institutions that encourage voter participation,” he said. “I encourage my supporters to join the League.”

But he said, “I think it’s unfortunate the current leadership of the League was unable to agree to a simple request of ours and took an adversarial stance. I wish it hadn’t been adversarial.”

“I am open to debate,” he continued. “Our request was just about transparency.”

Arora said Moss declined an offer from radio talk show host Lisa Wexler to debate. Wexler lives in Westport and is a Republican.

“Any discussion I avoided debate is just a lies,” he said.

Arora said he’d also been unfairly chastised for having worked at Enron.

“Enron had tens of thousand of people working for it. It was a firm that went bankrupt. I was as much of a victim as anyone else,” he said. “I lost a part of my savings, but I picked up my career, left Houston and found opportunity in Connecticut.”

Lastly, Arora said his past affiliation with the Democratic party boiled down to error.

The Registrars of Voters in both Greenwich and Stamford shared records of Arora’s changes in party affiliation.

The Stamford Registrar provided a list of general elections and primaries Arora voted in, including the primary election on April 26, 2016.

Records indicate he registered as a Democrat in Greenwich on Sept 17, 2010. On May 4, 2016, records show he switched to Unaffiliated.

On Oct 11, 2017 the Registrar recorded a switched from Unaffiliated to Republican.

“That was an error,” he explained when shown a copy of his registration card obtained from the Registrar’s office with Democrat circled. 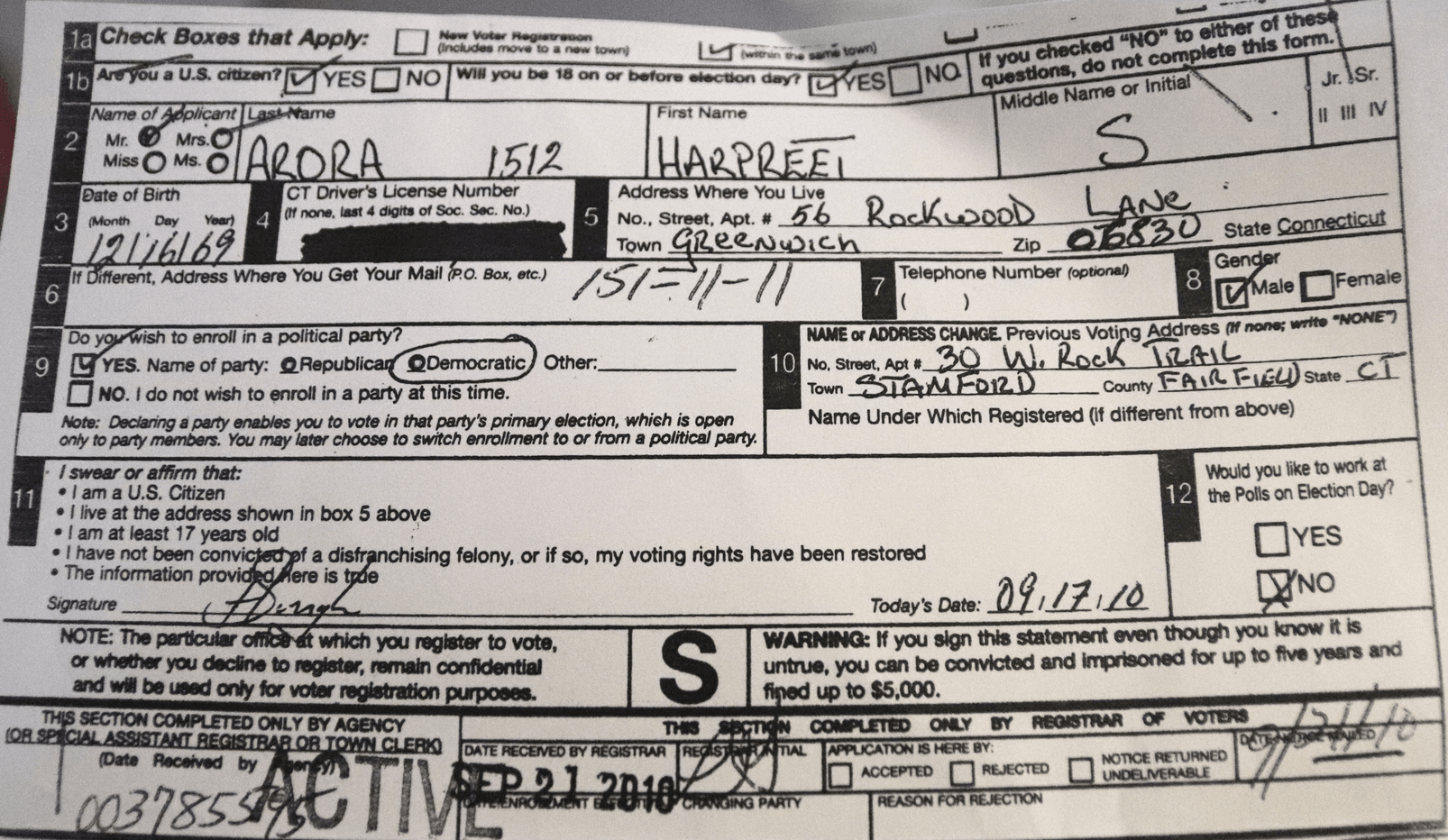 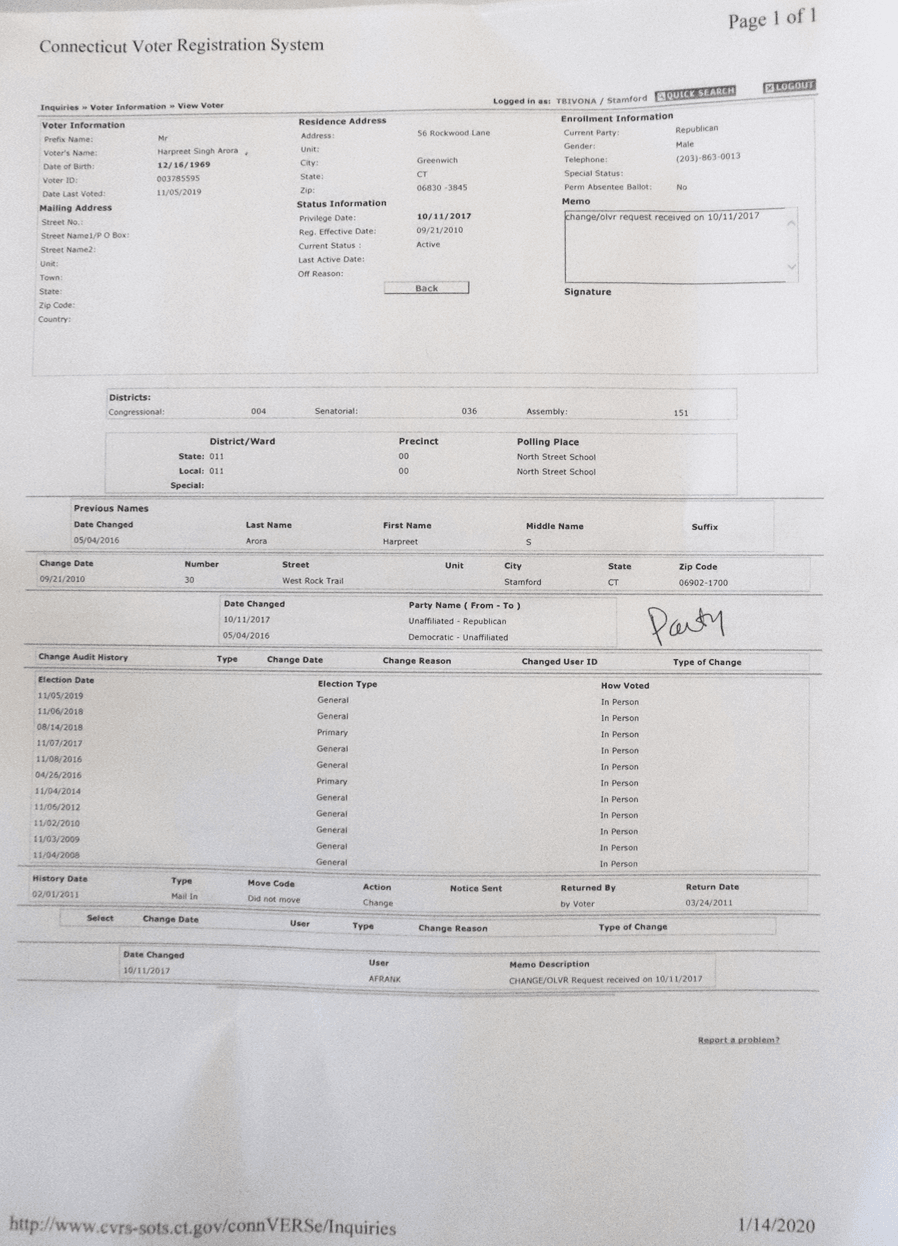 “It was an error for which I do not have an explanation,” he said. “It’s my signature and I take responsibility.”

Arora said he has been a lifelong Republican.

In Greenwich he said he canvassed for Republican Peter Tesei, and in Stamford supported Jerry Bosak, a Republican candidate for Board of Education. He said he invited 100 friends to an event he hosted in support of Dan Debicella in his run for US Congress, and also wrote policy articles for Debicella in a second race for Congress.

“Since then I have supported Chris Shays and spent several years, plus personal resources to support the Republican agenda,” he added.

“I have been advocating and fighting for local Republicans the last 20 years. In 2018, I spent a full year and a half running for US Congress, mobilizing close to a million dollars in donations.” – Harry Arora

“I’m a lifelong Republican in my beliefs and advocacy, as well as my policy and actions,” he said.