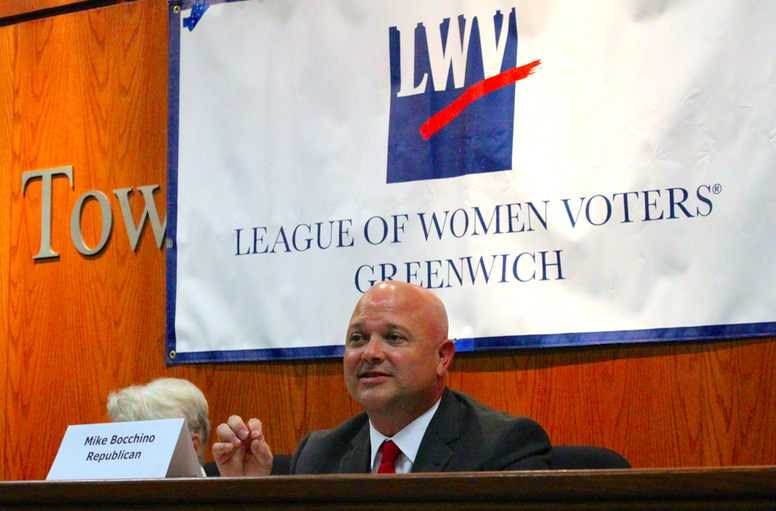 Monday night’s candidate debates hosted by the League of Women Voters of Greenwich was a full house.

Part two of the double-header was the debate between Michael Bocchino (R) and Jill Oberlander (D), both running for State Rep District 150, the position being vacated by Steve Walko. The debate kicked-off with a question about deficits.

Deficits: Rosey or Grim
Asked about budget deficits, Bocchino and Oberlander saw the glass half empty and half full respectively.

“We continue to slide more and more fiscally down the path of ruin,” Bocchino said off the bat. “Our deficit is growing out of control exponentially…The debt is staggering. The spending continues,” he said. “The spending has to stop,” he said adding that government should be held accountable. 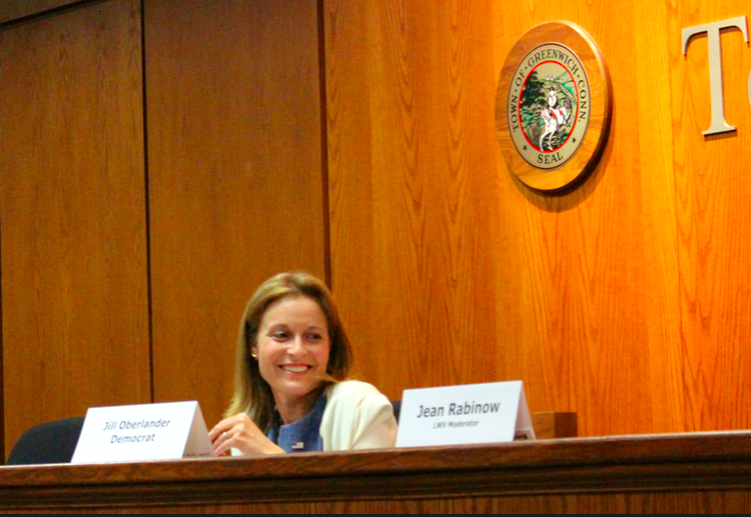 Mrs. Oberlander’s point of view was less grim. “We have a balanced budget. We’ve come a long way in the last four years. Four years ago we faced almost a $4 billion deficit and we are in much better shape,” she said adding that more is being spent on transportation and education had not been cut.

Oberlander said if elected she would challenge the status quo and she would use her experience on the RTM and the Finance committee to evaluate programs.

Attracting Businesses to Connecticut, Creating Jobs
The candidates’ points of view also contrasted when it came to whether the state is attractive to businesses.

“We have developed programs that are working,” Oberlander said. “Our jobs are high paying and high skilled,” she continued, adding that unemployment was down and that in advanced manufacturing there are more jobs than applicants.

Mr. Bocchino said Connecticut’s economy is not attractive to outside businesses. “Jobs are important, but not any jobs. We need career jobs. We need jobs that when kids coming out of college they are excited about.”

Metro-North and Public Transportation
“We deserve better,” said Oberlander on the topic of public transportation. Oberlander, who worked for many years for the MTA, suggested her transportation background would come in handy. She said Connecticut had under-invested in its transportation system, and that there had been both a lack of accountability and the transportation fund had been raided.

“I will use my transportation background and experience in the transportation industry to make sure we get the service we need and deserve.” – Jill Oberlander

Education and Common Core Standards
Oberlander, whose children attend private schools, pledged to be a tireless advocate for education in Connecticut. “Having government experience and a law degree might make me a better candidate,” she said to Mr. Bocchino during the conversation about education.

As for Common Core she referred to it as “the floor” rather than a goal.

Mr. Bocchino pointed out that the US is ranked #17 in the world in education. As a three-term PTA president at New Lebanon School, which is a Title I school in western Greenwich grappling with race imbalance and an achievement gap, Mr. Bocchino said he was in a better position to understand and fight for education.

“We have a lot of work to do on education,” he said. “We need to reach higher than Common Core,” he said, adding that a more vexing problem is the achievement gap and teachers who are forced to spend an in ordinate amount of time on assessments.

Toll Booths? Traffic Congestion on I95
Mr. Bocchino described himself as a townie who recalls tolls on I-95.

“They created nothing but chaos on the local streets,” he said before describing tolls as a new tax, which he would oppose.

“We agree!” Mrs. Oberlander said. “I am 100% opposed to tolls, particularly border tolls that increase congestion.” Still, she pointed out that there needs to be a source of funding transportation improvements.

On the topic of traffic congestion on I-95, Mrs. Oberlander had a laundry list of ideas, but said it was important to encourage more use of public transportation. “If it is fast, safe, frequent and  efficient, people will take it,” she said.

Her suggested remedies ranged from HOV lanes and van pools to enforcement of truck weight limits and penalties. She suggested accidents be cleared more quickly.

Mr. Bocchino spoke of choke points including on and off ramps, but said, “In this day and age, congestion is going to continue.” He agreed that it’s important to limit the amount of truck traffic on roadways and, with an eye to safety, make sure the roadways are able to withstand the volume of traffic.

And while Mrs. Oberlander said that she had been both a Metro-North commuter and six-year MTA employee, and would relish the opportunity to work on transportation challenges, Mr. Bocchino said he would prefer to see someone knowledgeable about transportation assigned to the task, rather than someone who worked for the MTA.

Guns, Mental Health
“We created one of the strictest gun laws in Connecticut, but we didn’t reach far enough into mental health,” Mr. Bocchino said. He pointed out that some families may not be able to afford mental health care for their children or may not be aware of help available.

Mrs. Oberlander said the Town has programs that provide mental health services for families who may not be able to afford them and that those programs should continue to be financed. She also suggested the concept of mentors in local schools.

Asked how they might respond if Mr. Foley were to become the state’s next Governor and attempt to weaken existing gun laws, Mrs. Oberlander said she would vote against any weakening of the gun safety laws, citing a decline in gun related deaths in Connecticut. “This law has made a difference,” she said. “I will fight against any rollback.”

Mr. Bocchino agreed that the new gun law had made a difference, and described background checks as good common sense reform.

“I understand there are a lot of people who want me to say ‘Not from my cold, dead hands,'” Mr. Bocchino said, referencing five-term NRA president’s Charlton Heston’s warning of threats to the Second Amendment.

“Others want me to say ‘Guns are horrible and we need to get rid of all of them.'” Describing himself as a consensus-builder, Mr. Bocchino said he would stand behind the laws that were enacted.

Voting Laws
Mrs. Oberlander said her goal would be to make it as easy as possible to vote, that absentee ballots are time consuming and might be replaced by internet voting. “The younger generation are using the internet  much more,” she said, adding that seniors who are housebound or bed ridden might also benefit from increases in technology.

“I’d hate to see the same technology used for voting that they use at home Depot,” Mr. Bocchino said, adding that if online voting was introduced, it should be “in a manner that makes sure there is no voter fraud…. and make sure they are citizens of the USA. I don’t feel we should give that right to anyone just because they come to the poll and say they are who they are.” Mr. Bocchino suggested absentee ballots be marketed better.

Merritt Parkway Multi-Use Trail
Neither candidate was in favor of the proposed trail. “I am pro bicycle, and pro alternate transportation, pro sidewalks, pro walking, pro physical activity and fitness, but I am not in support of the Merritt Parkway trail,” she said, adding that she’d rather see the money improvements to infrastructure and transportation.

Landline Service from Phone Company
Mr. Bocchino, who mentioned had a father who worked for the company for many years, said he supports maintaining landlines, but that he would like the phone company bury landlines under ground, especially considering there are many spots where cell phones don’t work.

Mrs. Oberlander said the home-bound use landlines to reach out to family or caregivers, and noted that landlines are vital when there is a power outage or when cell service is blocked.

Closing Remarks
“‘Fiscal responsibility.’ That phrase should be broadcast at the state capital over the loudspeaker every hour on the hour to remind the legislators what’s important,” Mr. Bocchino said. “When I’m elected I’ll never let them forget what’s important.”

Mrs. Oberlander said voters need not choose between change or experience. “I represent both,” she said.