Aaron Hull’s “We the People” students fired off more than a dozen questions, many quite pointed, at Wednesday morning’s Board of Education forum at Greenwich High School.

Dolores Eslava, Liz Murray and Joe Magliocco all juniors at Greenwich High School, were professional and composed, asking candidates in turn, to respond in 60 seconds or less to each question. In the front row, students kept time and held up time warnings to keep the event on schedule.

And while it’s one thing to discuss race imbalance and achievement gap during scantly attended Board of Education meetings, on Wednesday, candidates delivered their responses to a full array of students.

Several teachers brought their students to the performing arts center on Wednesday to attend the student-led forum for Board of Education candidates. Credit: Leslie Yager 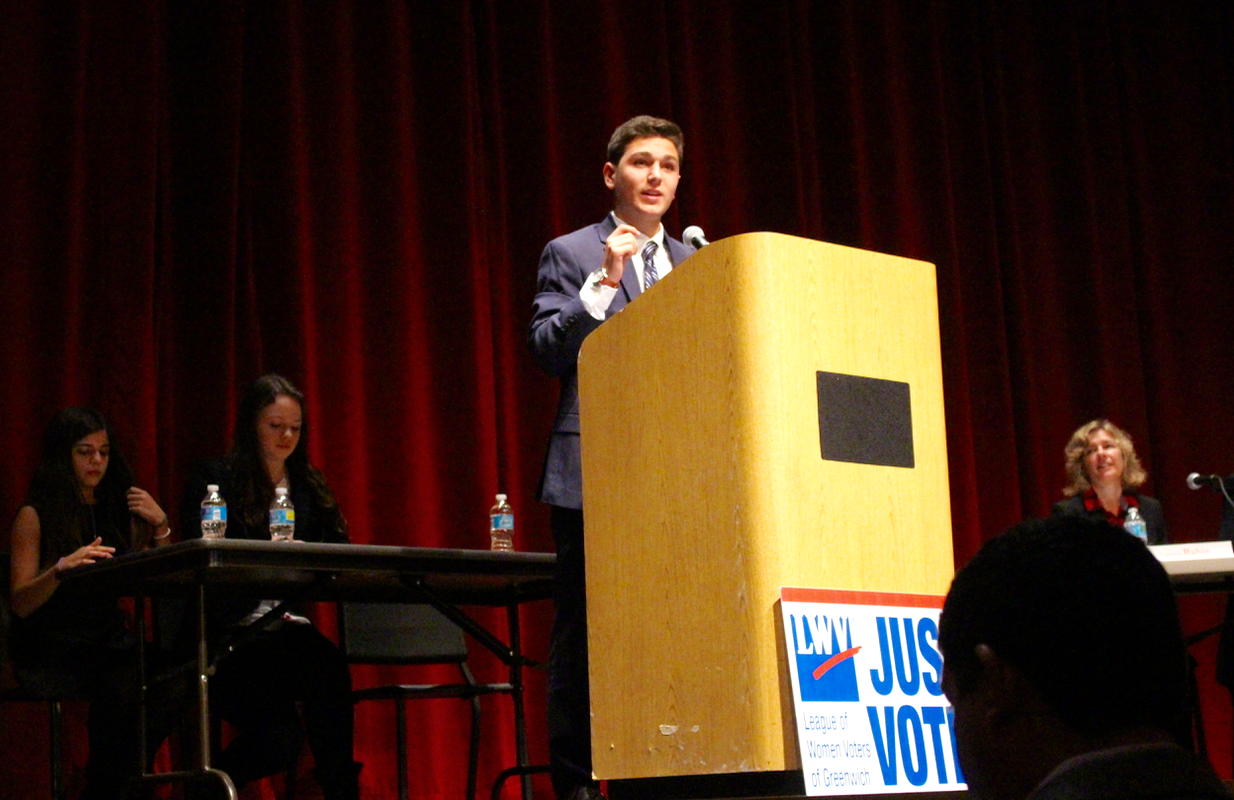 GHS junior Joe Magliocco addresses the audience during the Board of Education debate on Wednesday, Oct. 28, 2015. Credit: Leslie Yager

Candidates were asked for their responses to Superintendent McKersie’s comments in a 2013 interview with New York Times about segregation and racial imbalance in Greenwich, in which he said, “In 2013, that is a very different conversation than in the civil rights era. We are getting high-quality outcomes. The challenge with the State is, ‘Are you applying an old understanding of how to get educational opportunity that could undermine what we are trying to do here?’ ”

“Sitting next to someone with a different ethnicity doesn’t improve education, Peter von Braun said, adding that he was the one who fought a Board of Education plan to bus 900 students across town.

Mrs. O’Neill disagreed with Mr. von Braun’s claim, saying that there was never a plan to bus 900 students across town.

Mrs. Rabin said she didn’t support moving kids across the district to have the experience of diversity. “There’s a lot we can do without putting race into play.”

O’Neill said the law had merit, but Greenwich was different from other places where the law has been enacted. She said only three grade schools of 11 were deemed imbalanced.

“The middle schools and high school are balanced. It’s not like we have a population that is segregated through their whole 12 years education,” she said.

Mrs. Dayton, Democrat hoping to be re-elected, said the race imbalance and achievement gap reflect housing patterns, and the answer is not redistricting or busing, but providing equitable education.

Mr. Lopez, an African-American and the lone minority candidate, said magnet schools, while a good idea, won’t draw people from other parts of town. “I agree with the spirit of the law,” he said. “In Greenwich the achievement gap is exacerbated and has to do with predominantly Hispanic and poor communities. It has been shown that to mix those students in with higher achieving students has benefits. We need to do more than just magnet schools.” 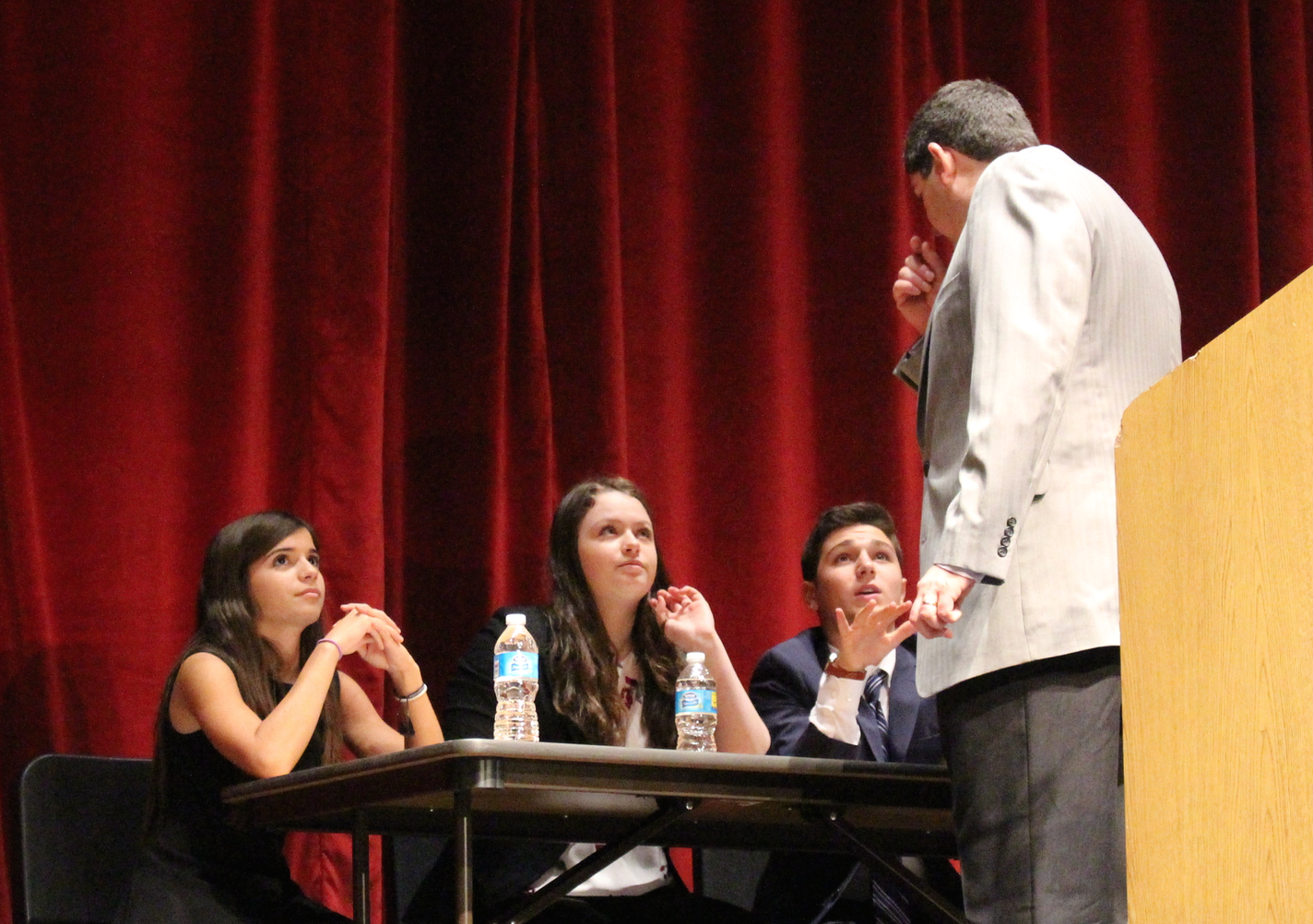 Dolores Eslava, Liz Murray and Joe Magliocco — all We the People students — consult their teacher Mr. Hull just before the beginning of the forum at GHS, Oct. 28, 2015. Credit: Leslie Yager

The touchy subject of how should the District handle accusations of staff impropriety hinted at the subject of the longtime Band Director’s termination, which he has appealed and is yet to be resolved after nine full days of six-hour hearings that spanned both summer and fall.

“Aggressively,” said Mr. Lopez, adding that when he was a dean at a charter school in Bridgeport these situations were best dealt with immediately and that fact-finding was key.

“We can’t allow a situation like this to cause so much pain and disruption to school,” Mrs. Dayton said.

Mr. von Braun, who recently said on a WGCH 1490 interview said, “Mr. Yoon has been prosecuted, some say persecuted by the administration,” took a different tone on Wednesday. Pointing out that the Yoon situation is yet to be resolved, he said, “The board has been directed not to read about or discuss the hearings. We’re the final means of adjudicating, so I can’t comment.” 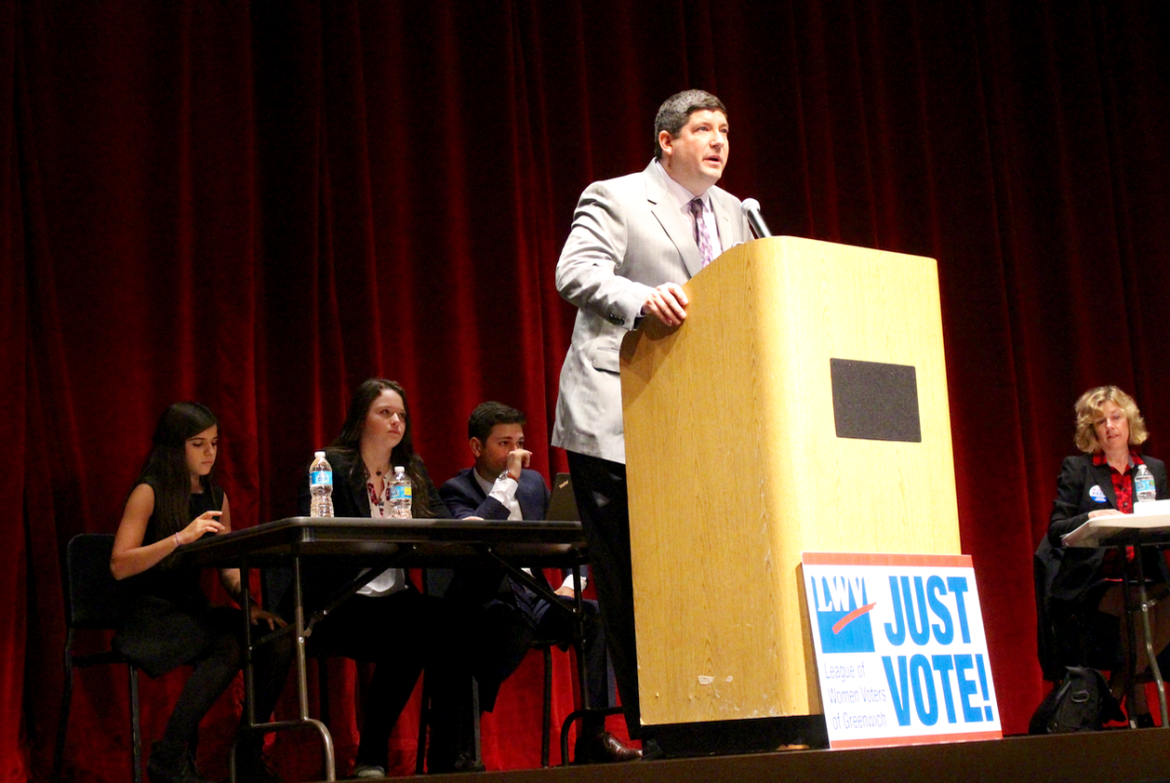 We the People teacher Aaron Hull welcomes people to GHS on Oct. 28, 2015 for the Board of Education forum. Credit: Leslie Yager

Candidates were asked if they supported dispersing New Lebanon students during their construction, but the question was was loaded.

“This dispersal process successfully occurred with in 2008 with Glenville elementary students. What lessons did you learn from the dispersing of those students and why can’t a similar plan be implemented with New Lebanon students? Will it help address racial balance now and in the future?”

Mrs. Dayton said that with Glenville, dispersal was never the first option. “That fell through because of mold in the temporary classrooms,” she said. “Dispersal made it impossible to support students as they are supported within their buildings. She pointed out that in New Lebanon there is a high level of poverty, a lot of ESL Students, and twice the number of special needs students as in other schools.

First Selectman Peter Tesei has spoken publicly more than once in support of dispersing New Leb students, holding up Glenville as a model of its successful use. However, the candidates, other than von Braun who said dispersal could be avoided entirely through offsite construction, all agreed that dispersal is a particularly bad idea at New Lebanon, though each had a unique perspective. 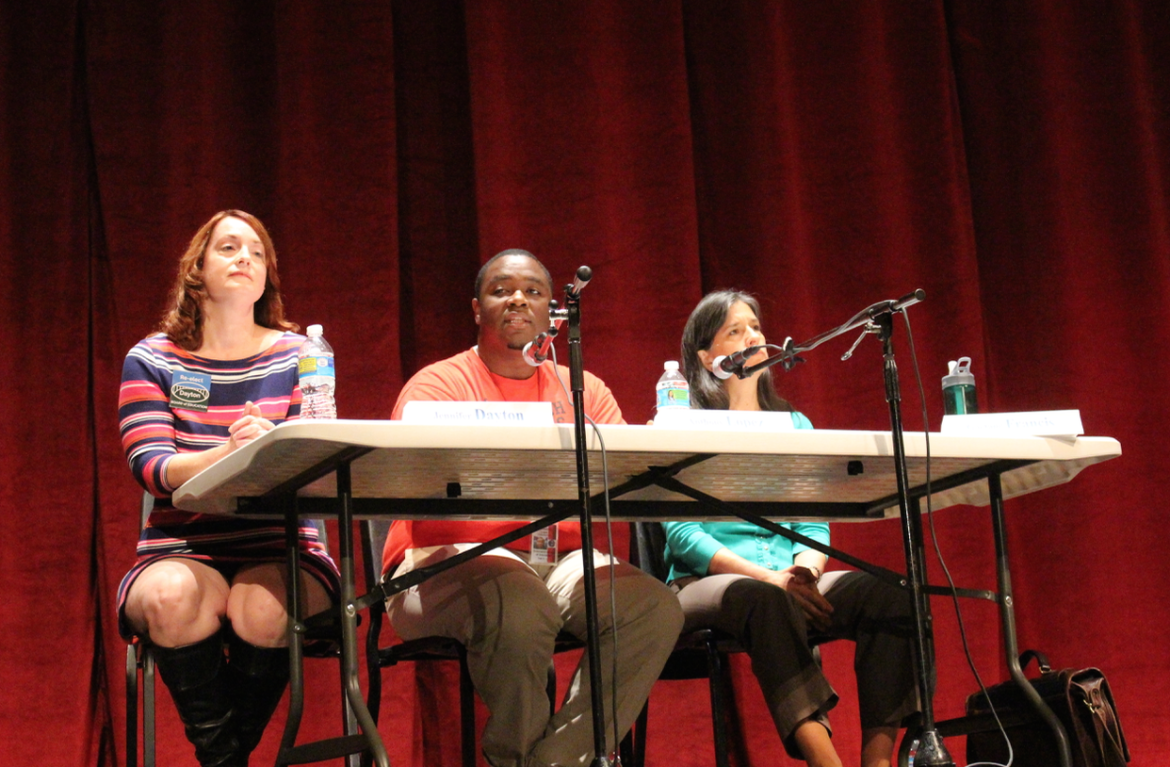 Mr. Lopez, whose children went to or go to Julian Curtiss, another Title 1 school  that became a magnet after being cited for race imbalance said, “We have to consider that we’re breaking up ‘the unit’ and exacerbating the problem we already have.”

Dr. Francis said her older son was at Glenville when the students were dispersed during construction. “We managed, but we lost a lot of students,” she said.  “And it was a stress to students, parents, teachers and others providing services.” She said that while she prizes diversity, dispersal does not work toward that end. “You have one class from New Lebanon in a classroom in another school,” she said.

Mrs. Rabin agreed that dispersal doesn’t provide benefits of a truly diverse school. “Students aren’t integrated. It’s like a school within a school,” she said, adding that New Lebanon families mostly walk to school, and that kindergartners are already being taught across the street at BANC where they get extra services. She said busing kids to other schools would ultimately wind up separating families, if, for example, a family with a kindergartner is bused to one school and a 5th grader to another.

Mrs. O’Neill recalled that after fire ravaged Cos Cob School in 1990, students were sent to Parkway School, which was reopened at great expense, providing a third bad example of dispersal. “The research shows that disruption of students being placed in a new school results in decreased scores. This is a not a population where we want to see that happen,” she said of New Lebanon. “This is a population where we spent extra time and money to bring their scores up.” 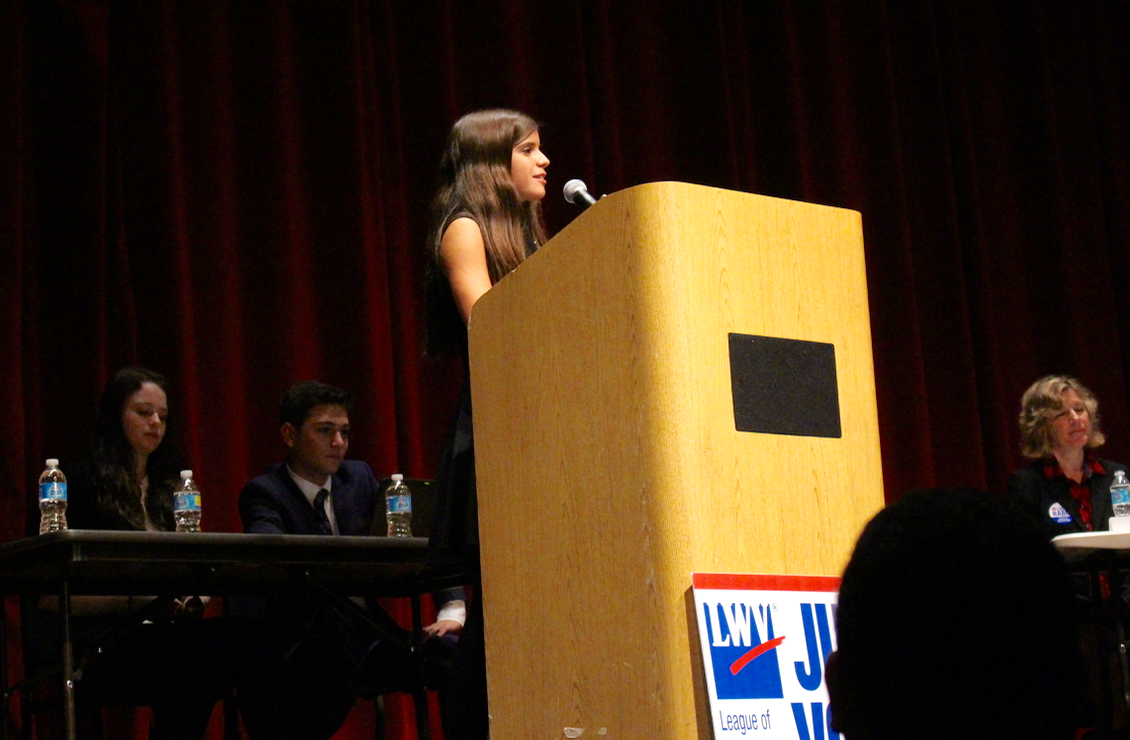 GHS junior Dolores Eslava was one of three We The People students who questioned Board of Education candidates on Oct. 28, 2105. Credit: Leslie Yager

Candidates were asked whether it is important to take student opinion into account for teacher evaluations. Peter von Braun said teachers differ in approaches and rather than tracking opinions, results should be the focus.

Barbara O’Neill, who was a longtime teacher before joining the Board of Education, said taking into account student opinion in formal evaluations leads to grade inflation.

Mrs. Rabin said students should at least have some impact, especially where there are patterns of positive or negative comments.

Mr. Lopez said student evaluations are important, just like in college where students are given a chance to give positive feedback and praise. “The kids are mature enough to evaluate fairly,” he said. “Feedback helped me become a better educator.”

Dr. Francis felt strongly that student feedback should be included in evaluations. “It’s very important for high school students’ opinions to be included. There should be a good structured way to give anonymous feedback, which has value.” 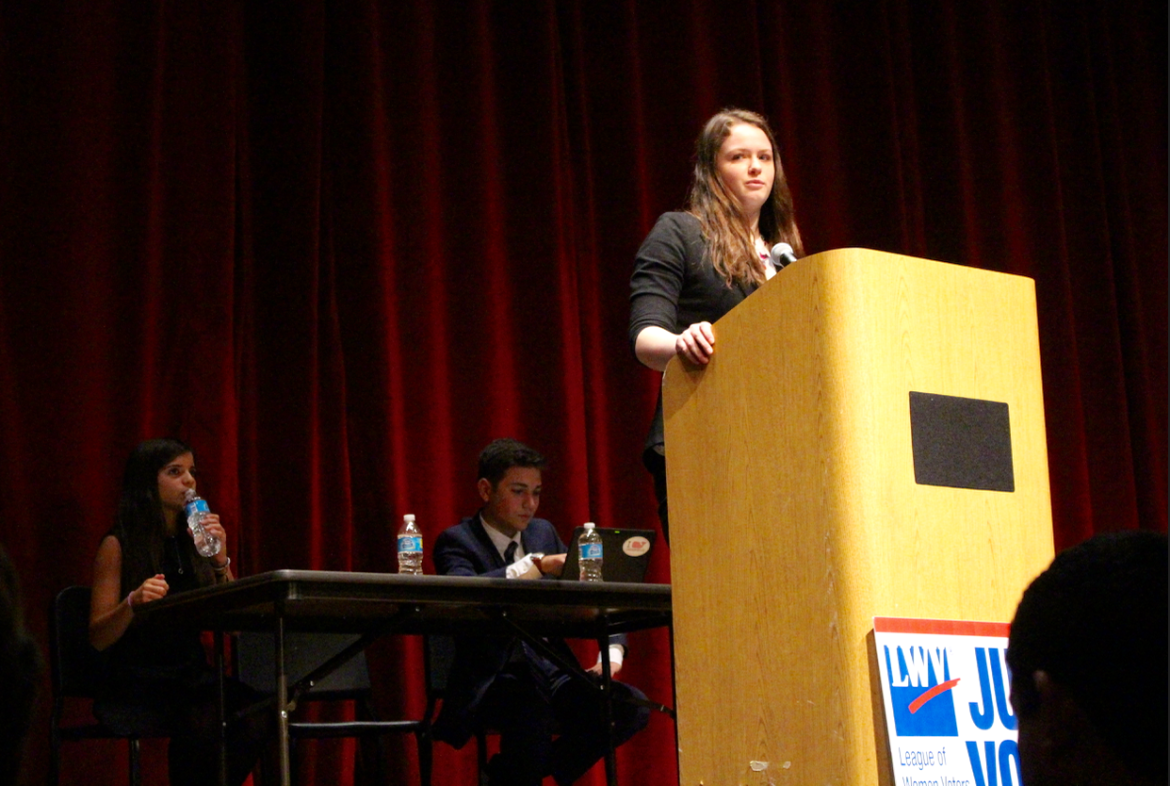 Liz Murray of We the People, directed questions to the Board of Education candidates on Oct. 28, 2015. Credit: Leslie Yager 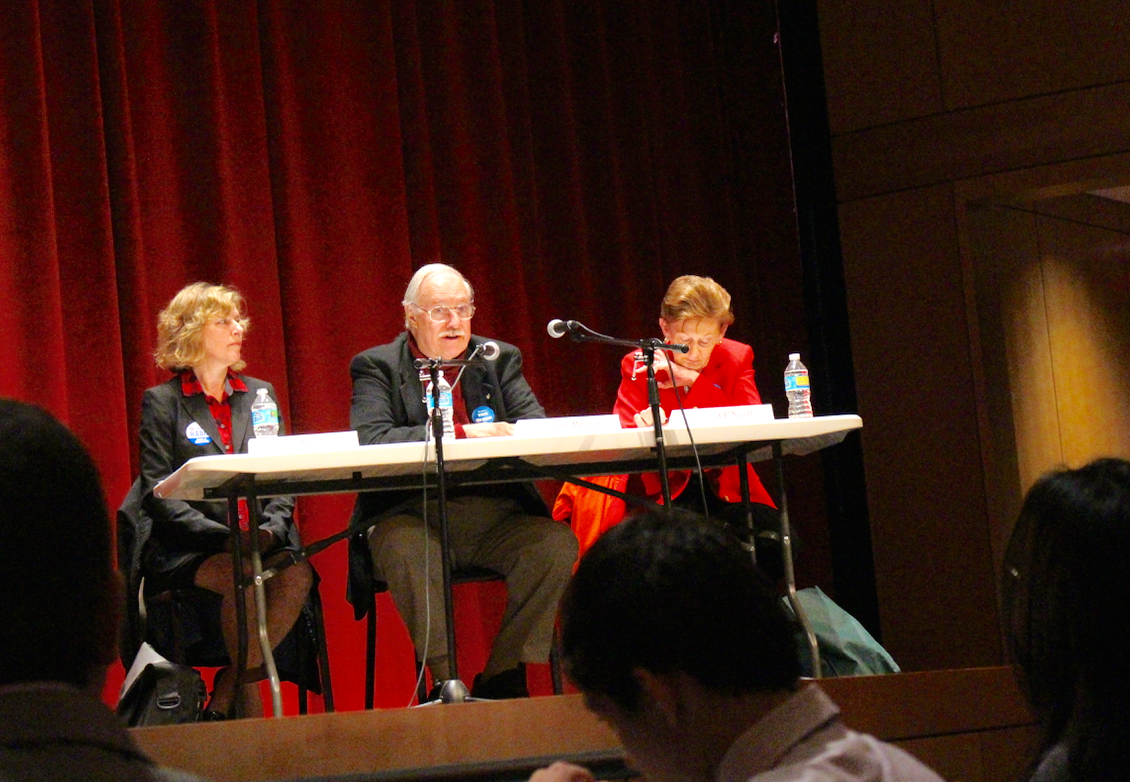 On the issue of school start time, Mr. von Braun said, “I was the one who revived the campaign for a change to Greenwich school start times. After the first Ice Age, when I was in Greenwich High School, all classes ended at 3:00pm and started at 9:00am,” he said, to some mutters of surprise among the students.

“Cost is not a legitimate issue, if you do it right,” he added. “Let’s cut to the chase. A lot of options being proposed are silly. I proposed that we hire a transportation consultant and the administration accepted the proposal to recruit an expert.”

Mrs. Rabin who supports a change in school start time said when she attended GHS in the late 1970s, school started at 7:50am. She also recalled the challenges of getting her two boys up and to GHS by 7:30am.

On the topic of school start time, Mrs. O’Neill said, “I think we’re asking the wrong question here. We should be asking how to reduce student stress.”

Mr. Lopez, who is a paraprofessional at GHS said delayed school start time will impact him and other aids who he said work a second job after school to make ends meet. He was also concerned that athletes not miss additional instruction time to participate in sports. “And I don’t want to see athletes coming in at 6:00am to make up class. The value of being here at GHS is that I get to hear from you guys,” he said.

Lopez said he wants option 6 – the option of retaining the status quo – off the list of school start time choices. “Simplify the options and get feedback from the community,” he said.

Dr. Francis said if the day starts later that athletes would have to leave earlier for games, but was passionate about the need to do something about sleep deprivation. “As a physician and a mother, I have felt strongly about this for a long time.”

O’Neill who as a teacher for 35 years and the leader of ALP for the district, said students are impacted by the volume of homework assigned and the number of AP courses they take. That said, she didn’t favor a hard cap to AP courses a student can take.