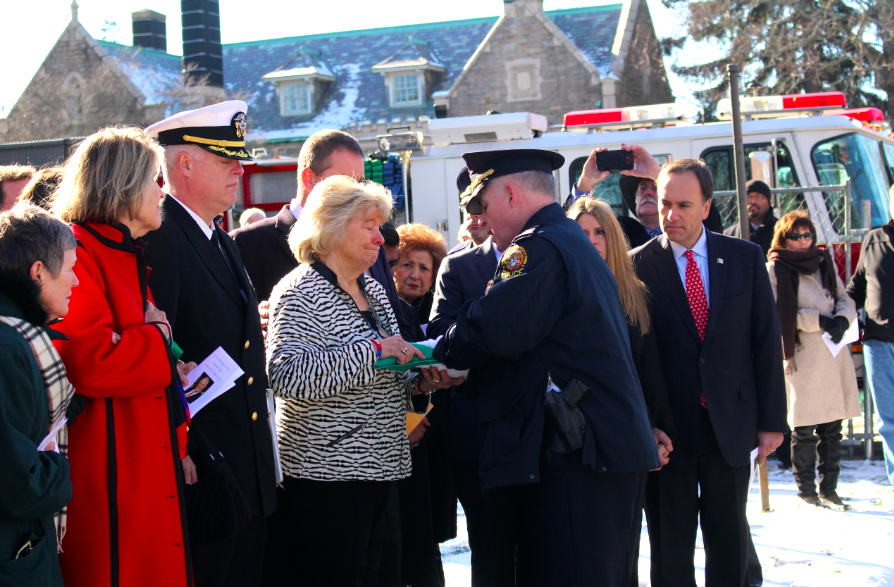 A public service at Christ Church Greenwich on Saturday was dedicated to the memory of Greenwich Selectman David Theis, who died unexpectedly on Dec. 23.

Over 800 turned out to celebrate the life of a man known for his patriotism, his love of Greenwich and his ability to make everyone feel special.

Ken Borsuk, who edited Greenwich Post for many years, said he strove to be the best reporter in Town, rising to the expectations of Theis. “You wanted to earn it,” Borsuk said. “You wanted to be the person he saw.” 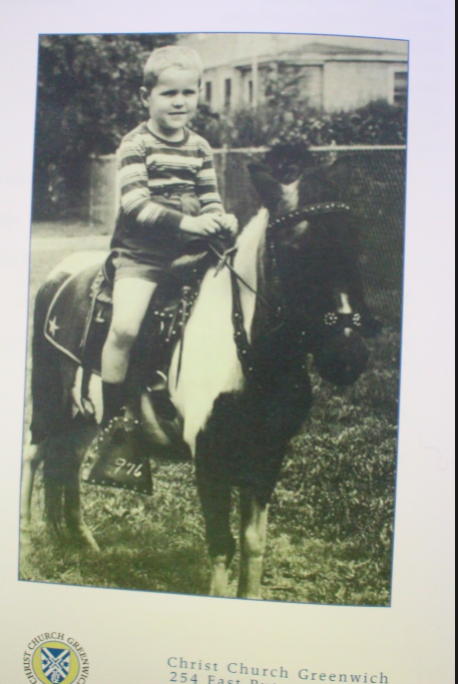 Back cover of the program for the special service for Dave Theis at Christ Church on Jan. 10, 2015.

“He was always there on behalf of someone else… It was never about what you could do for Dave Theis, but what he could do in his position to help other people in Town,” Borsuk said.

Borsuk said that during the ten years he knew Mr. Theis, there were always invitations for a beer at local spots like the St. Lawrence Club and how he regretted declining.

This past October, Borsuk recalled, after a debate in Old Greenwich, Theis again suggested a beer, and how he’d finally agreed, joining a group that included Republicans Ed Dadakis, Fred Camillo and Theis. 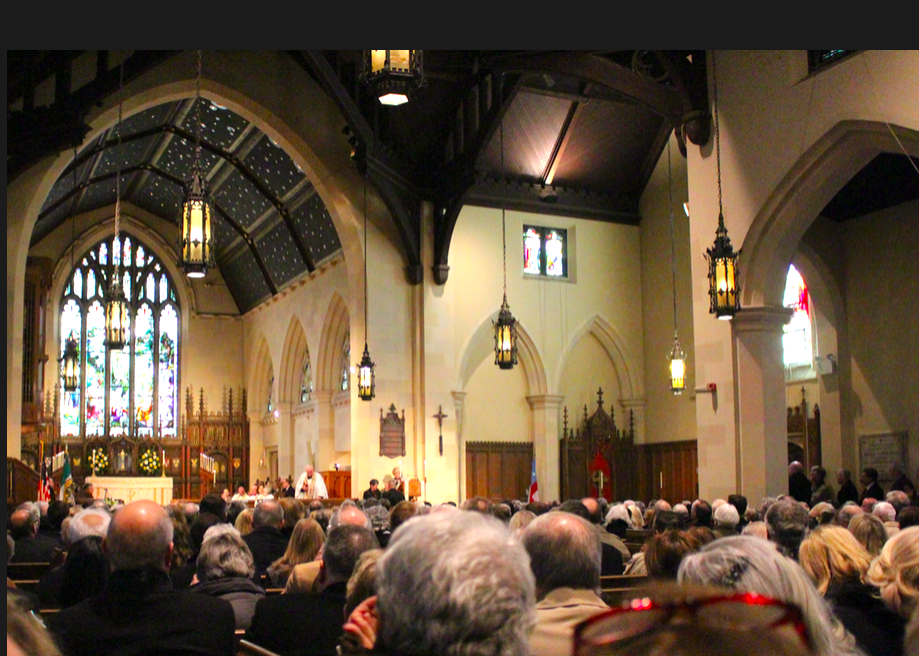 “It was like the old Sesame Street song, ‘One of these things is not like the other,'” Borsuk said to a chorus of laughter in the church. “But I wish I had taken him up a lot earlier because Dave was just a great guy.”

“Dave was a genuinely good, decent man who cared deeply about the welfare of others,” said First Selectman Peter Tesei, going on to tell how his own small children had gravitated toward Theis. He described driving around Town with his children during campaign season, he would ask them who they would vote for. “They’d say, ‘Dave Theis. Dave Theis,’” he recalled them chanting from the back seat.

US Senator Richard Blumenthal shared his memories of Mr. Theis. “He loved people regardless of race, or social condition, or political persuasion. He cared so deeply,” the Senator said. “He epitomized the old saying, ‘There is no limit to the amount of good you can do as long as you don’t care who gets the credit.'”

State Rep. Fred Camillo said his memories of the late selectman began as a little boy when Theis was a family friend.

“Big or small, black or white, it didn’t matter. Dave was your friend,” Camillo said, adding that Theis parlayed his love of athletics into a job as Athletic Director at GCDS and later found work in the financial services industry. He recalled that  his own late father, who lived through the Great Depression, purchased stock for the first time in the early 1990s, buying them from Dave Theis.  “It was because he loved Dave Theis. You didn’t have to worry about the trust factor with Dave.”

Camillo recalled how Theis volunteered as dinner chair on the board of the Old Timers Athletic Association, a job he described as an intense one that most people undertake for one or two years.

“Dave did it twelve years. He didn’t care. He didn’t complain. He actually loved it,” Camillo said.  On a lighter note, Camillo recalled how his friend occasionally stirred up mischief, and enjoyed many local establishments that featured Budweiser on the menu, including the old Horseneck Tavern, Bruce Park Grill and Cos Cobber.

US Navy Capt. Mark Turner urged the crowd in the packed church not to be sad. “Let us not leave here with empty hearts, or focus on how much we will miss him,” Turner said. “Let’s all honor his memory by living a life of gratitude, a life of greater service to others.” 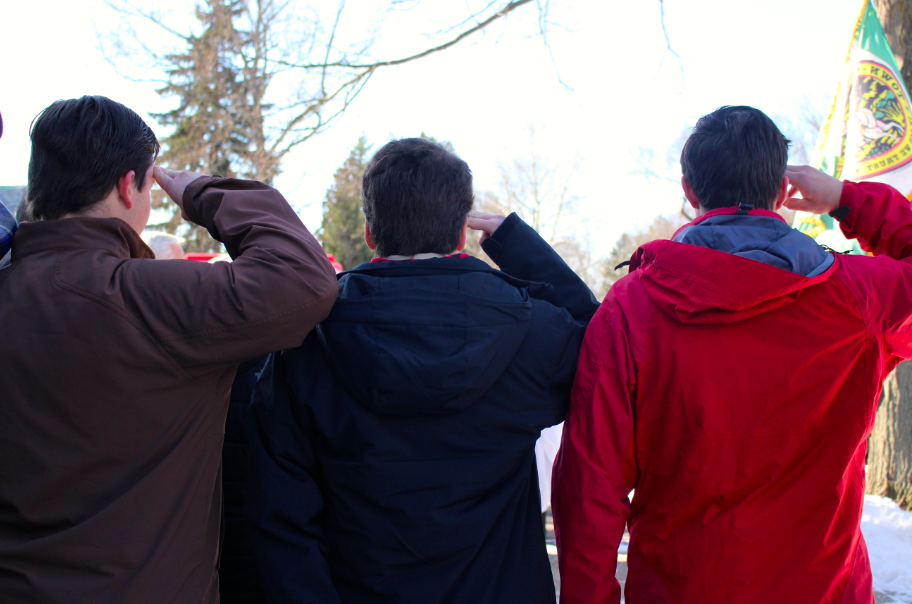 Greenwich Police Chief Heavey described how Theis was not only a supporter of scouting, but an especially strong supporter of those in the armed services, describing him as always “front and center” during ceremonies. Heavey said Theis made sure that welcome-home processions traversed the bridge over the Mianus River where rows of American flags are displayed annually from Memorial Day to Labor Day.

“The perhaps soon to be named the David Theis Bridge,” Heavey suggested, to a resounding applause.

Heavey said he and Theis previously had the same summer job as aquatic director at Camp Seton and pointed out how Mr. Theis had opened up the selectmen’s office to the Boy Scouts to complete their citizenship and community merit badges. 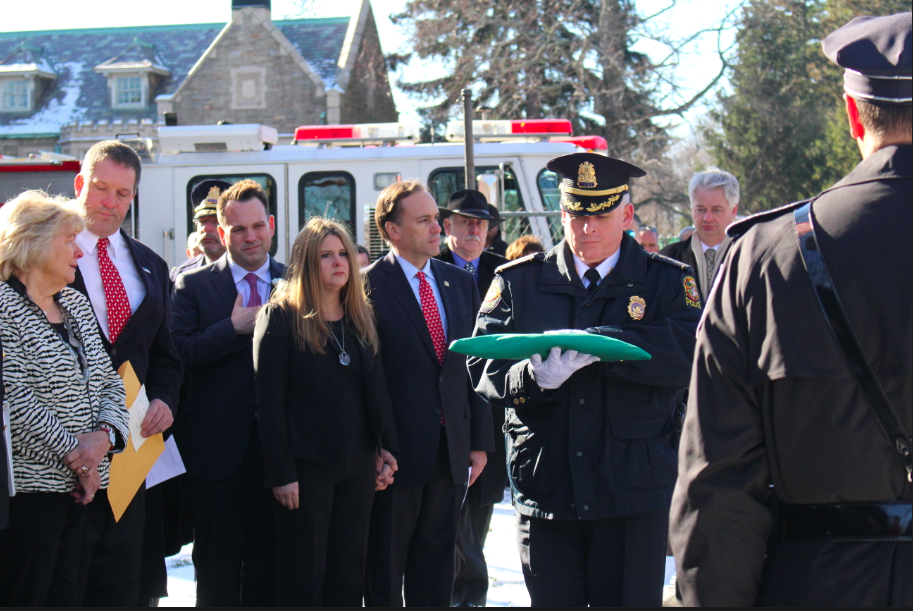 Theis’ childhood friend, Louis Hipp III, “Louie,” recalled being the new kid when his family moved to Cos Cob from North Carolina. He described how Theis invited him to join his table in the cafeteria and being mystified by the Cos Cob boys’ lunches. He said Theis enjoyed telling the lunchroom story.

“As Dave tells the story, Tommy Schinto says ‘I’ve got a meatball wedge.’ I had no idea what a wedge was and how a meatball would end up between two slices. And he’d say ‘Hey Tony, what you got?’ ‘Proscuitto with cheese on a hero.’ Then, ‘John Franco, What you got?’ ‘An Italian Sub.’ … By the time he got to this point in this story, the giggling had already started,” Hipp recalled.

“‘Hey Louie what you got?’ he said, mimicking Theis’ impression. “And in this most powerful voice he’d look at me and say, ‘Peanut butter and banana…. And if he wasn’t laughing too hard, he’d add, ‘And date nut bread and cream cheese, with the crusts cut off.’ But he usually didn’t get that far. And he had a full-bodied laugh.”

Hipp recalled Theis’ mischievous side, the jokes and occasional ‘illustrious pranks’ at Central Jr. High and GHS. Theis’ boyhood friend noted the irony or how the selectman’s office at Greenwich Town Hall was located in the former GHS principal’s office.

“We are all travelers in the wilderness in this world. The best we can find in our travels is an honest friend. I hope he knows just how much he meant to each of us.” – Louis Hipp III

Theis’ longtime partner Kerrin Coyle read aloud a heartfelt letter she had received from Melissa Bruno, who said she hoped to remember Theis in the future by paying forward ‘that feeling of mattering and respect.’ 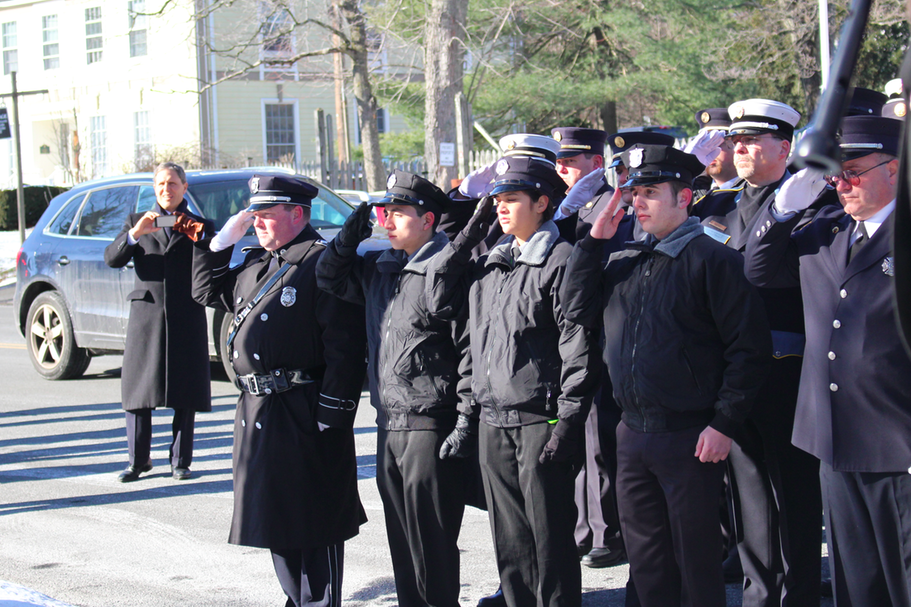 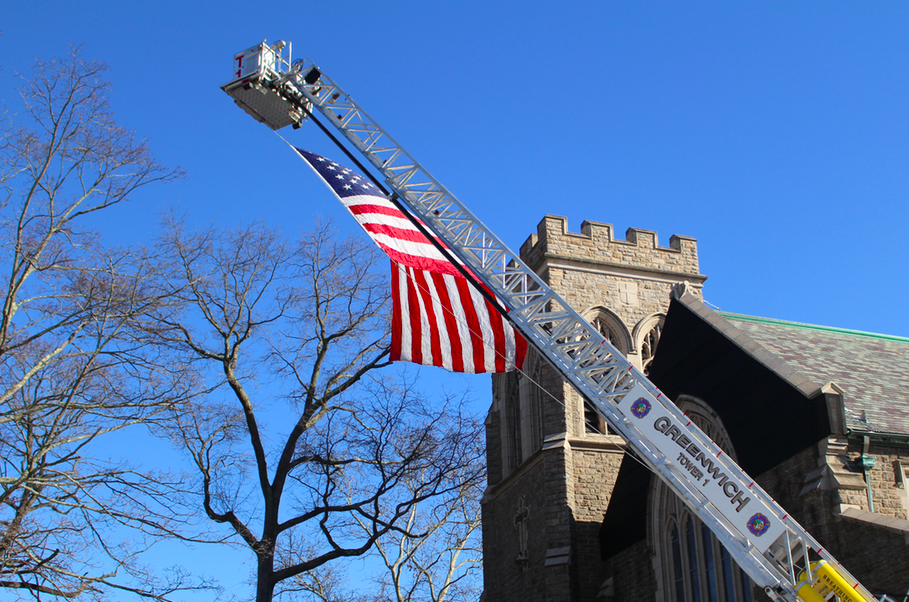 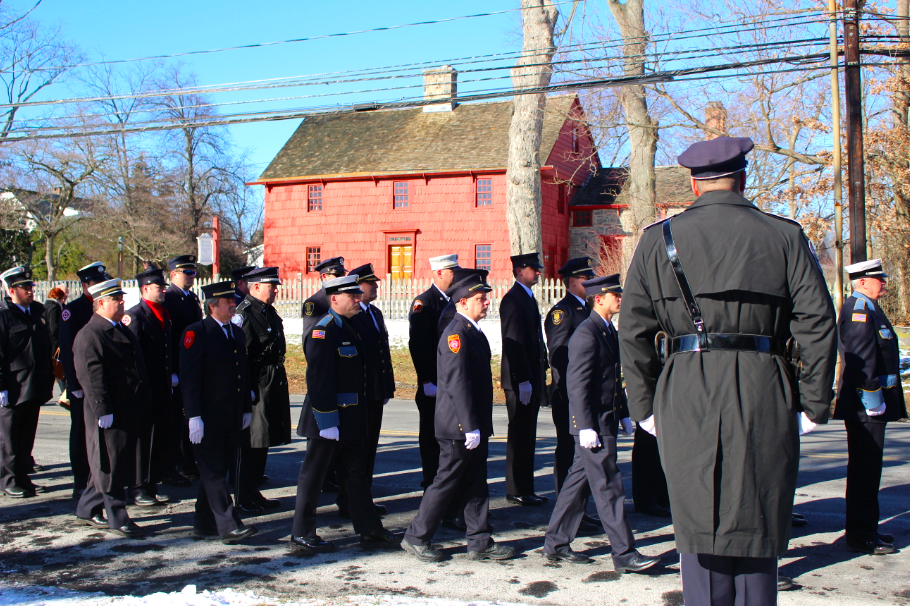 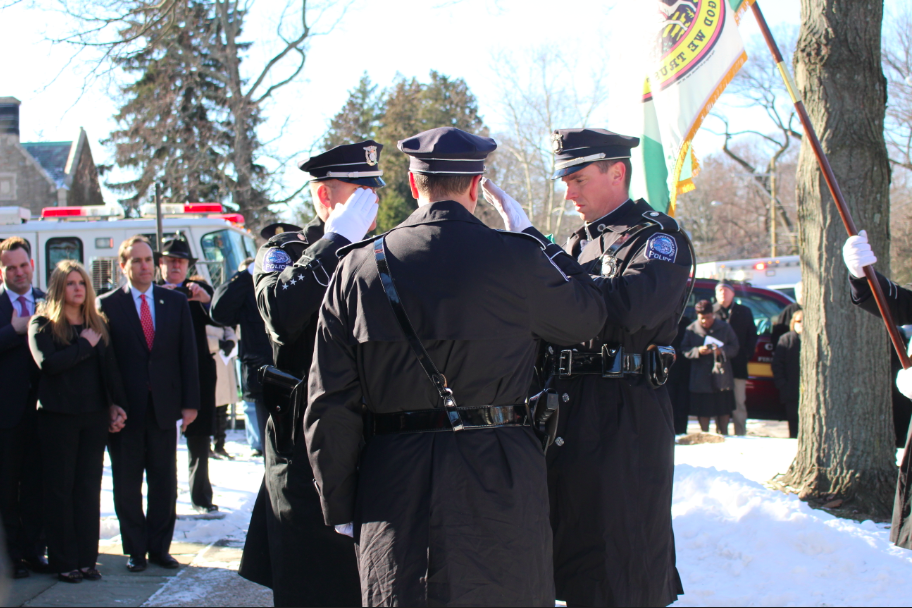 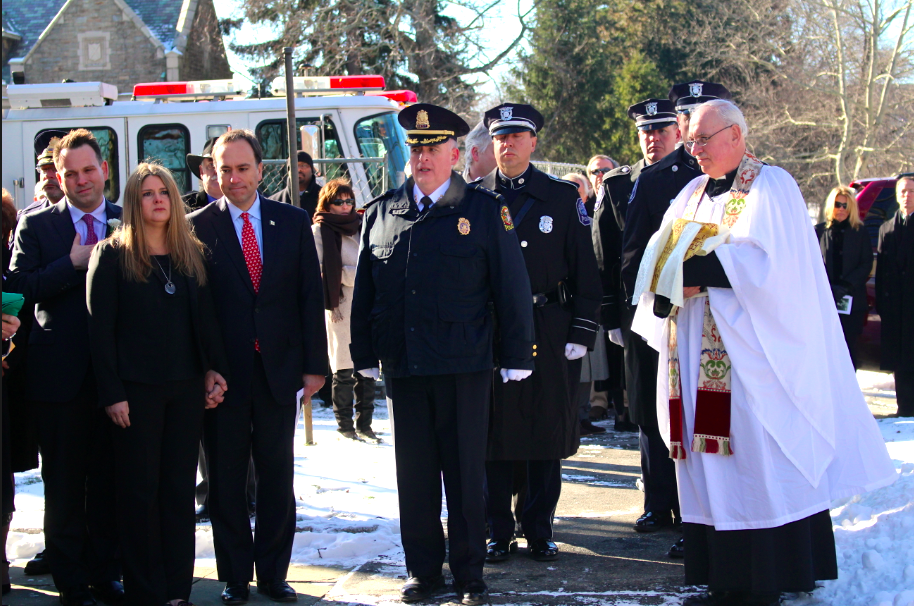 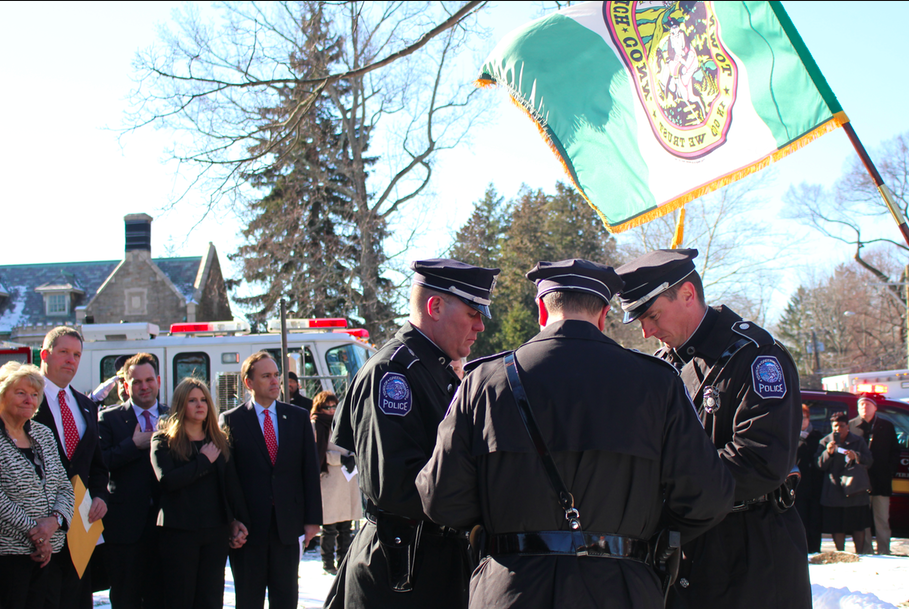 Laughter and Tears at Selectmen Tribute to Dave Theis