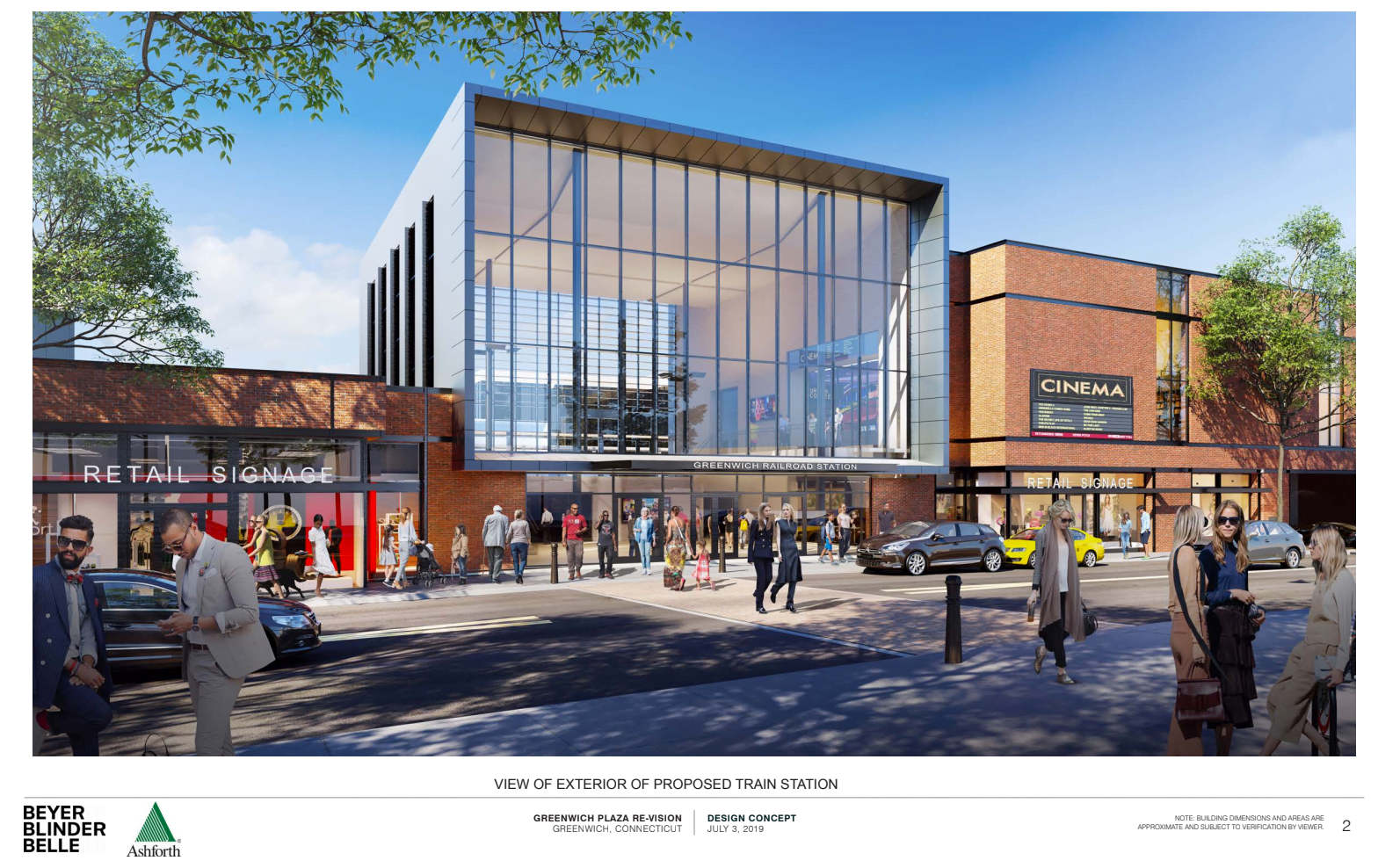 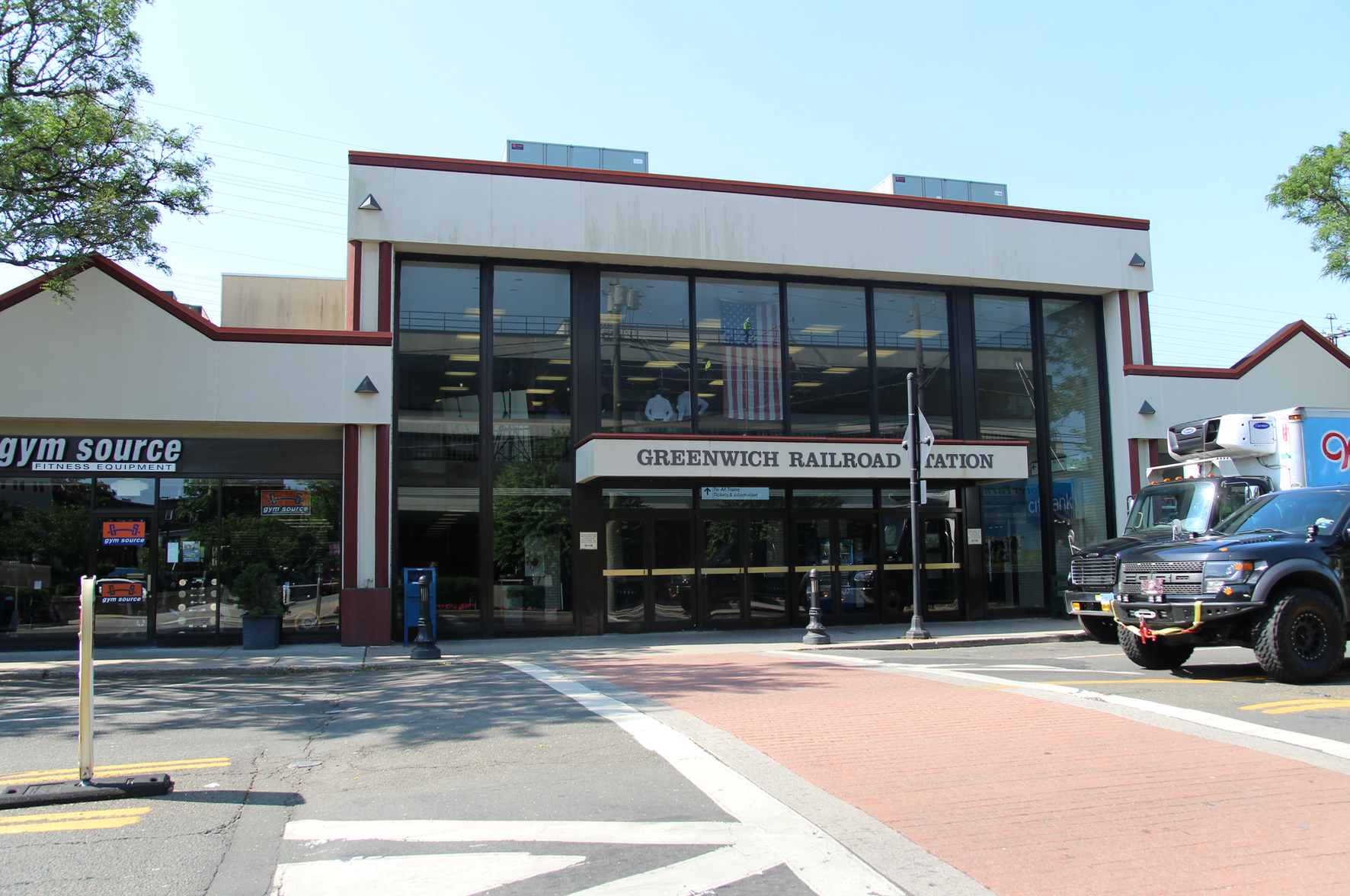 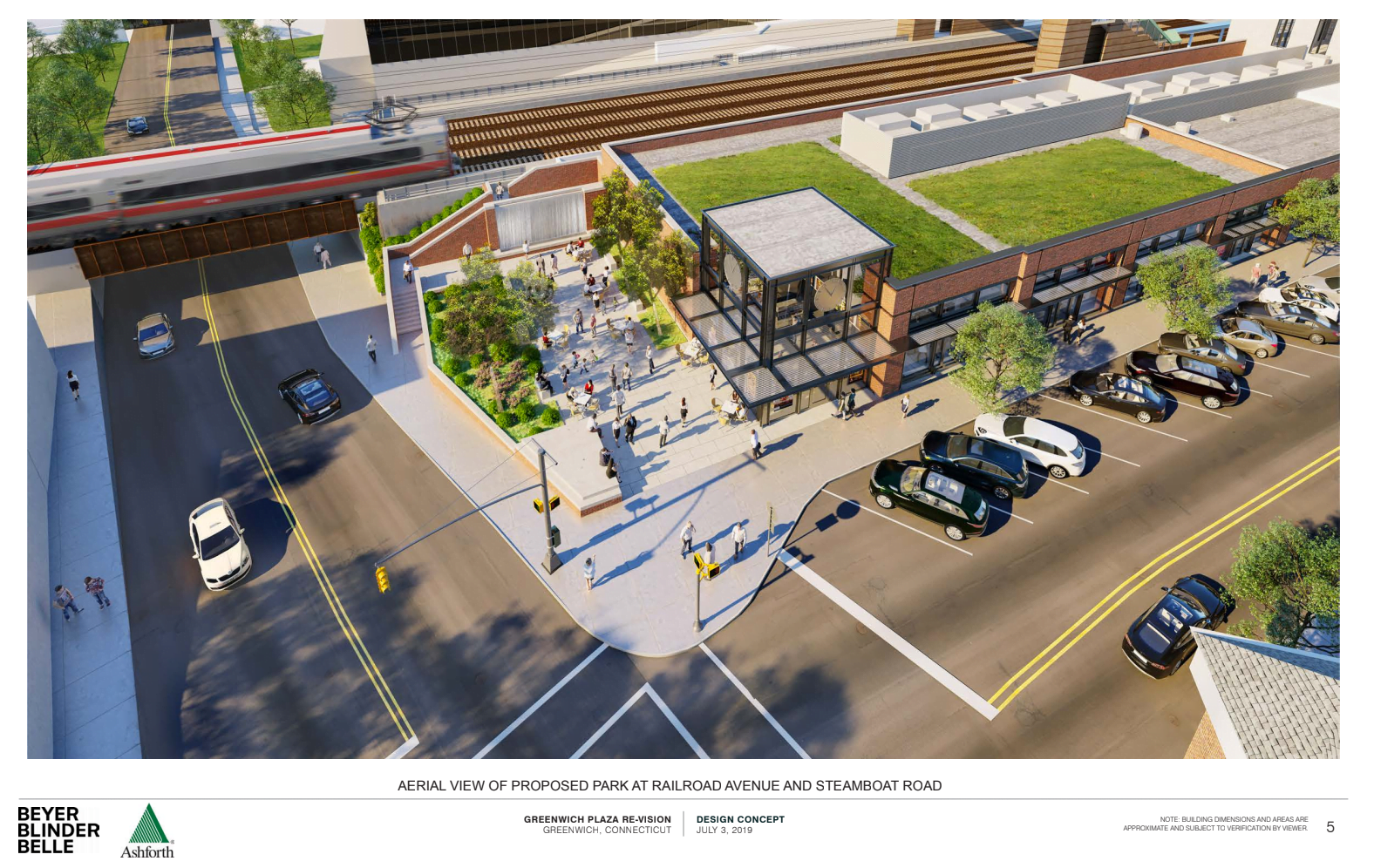 Aerial view of proposed park at corner of Steamboat Road and Railroad Ave.

A project to redevelop Greenwich Plaza and the Greenwich train station was announced at a joint press conference hosted by First Selectman Peter Tesei and the Ashforth Company on Tuesday morning in the train station lobby.

News of the public-private project between the Town of Greenwich and Greenwich Plaza, owned by the Ashforth Company, was kept under wraps until late Monday when an invitation to the media was emailed.

Tuesday’s press conference was the first word of the $45 million proposal that will go through a very public process.

That said, a hint of Ashforth’s thinking came in March 2018 when attorney Bruce Cohen, representing Greenwich Plaza before the Planning & Zoning Commission,  said his client felt the retail strip along Railroad Ave needed upgrading and proposed for Bow Tie to to move the theater to the second floor, obtain a café permit, and serve both meals and liquor.

“My clients have been working on an upgrading plan for some time,” Mr. Cohen said at the time. “A key component is upgrading the theater.”

On Tuesday morning Co-CEO of The Ashforth Company Darrell Harvey said over the last 50 years since Greenwich Plaza was developed, much has changed including how the train station is used.

“The transportation center will appeal to future generations, including millennials,” he added.

Also, he said, completion of the Greenwich Plaza will dovetail with the new east side access to Grand Central Station, where a new level beneath the station will be constructed.

Mr. Harvey said there is a significant coordination between the Greenwich Plaza project, rail in Connecticut and changes in New York City. 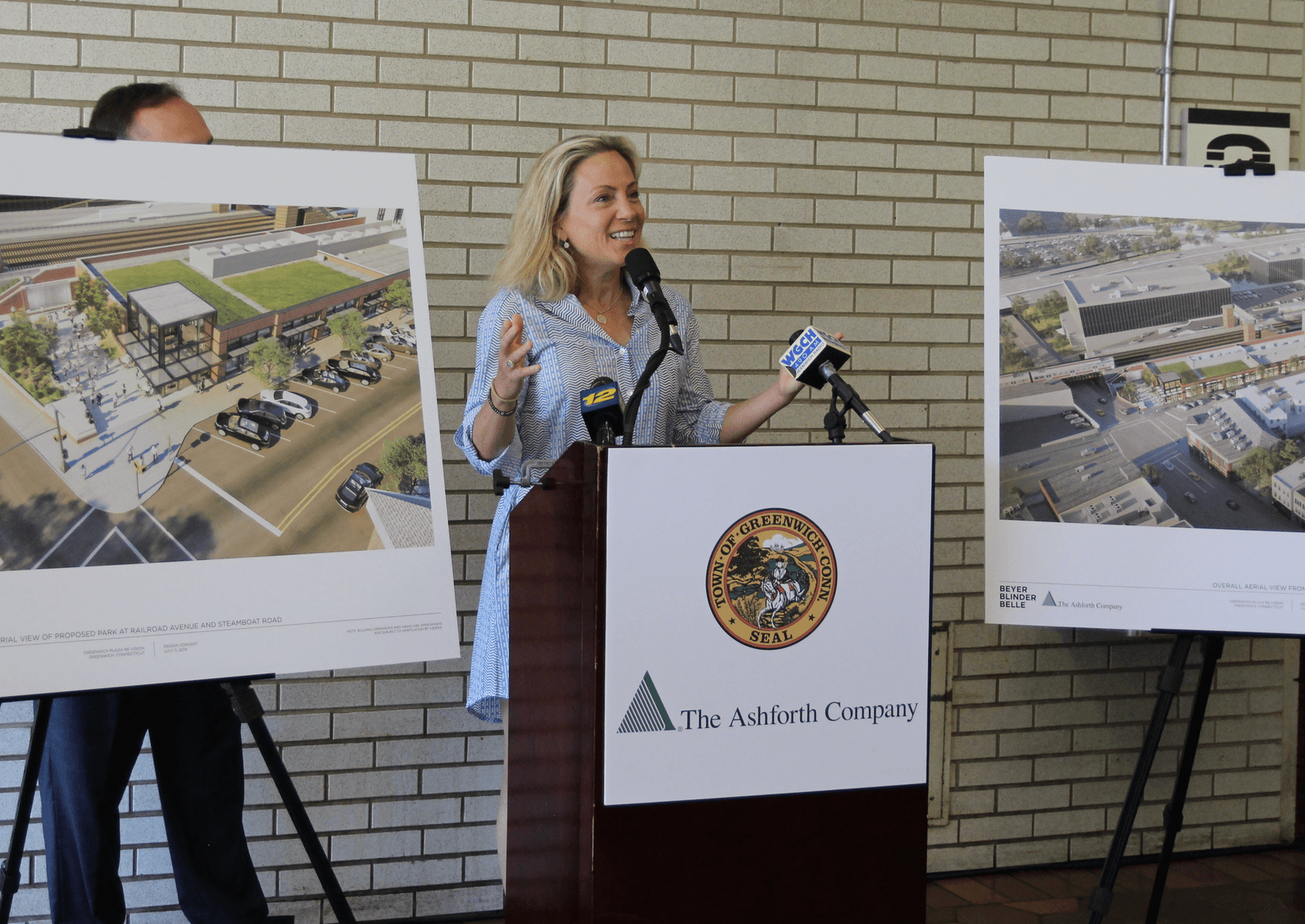 “The opening up of Penn Station, because the LIRR where it comes in to Grand Central frees up slots and the New Haven Rail line will be able to go directly to Penn Station from here,” he said. “That will again change commuting patterns and make New York City more directly accessible and make it easier for people in New York to get out here from a broader part of New York City.”

Harvey said changes in transportation include more people coming and going from the train station via Uber or Lyft.

Harvey said there had been numerous iterations of the project leading up to the display of renderings on easels on Tuesday morning.

He said there was also consultation with and support from Metro-North, as well as the State, including the new CT Transportation Commissioner Joe Giletti, who was appointed by Governor Lamont.

“He understands rail travel more than anyone because he used to be president of Metro-North,” Mr. Harvey said. 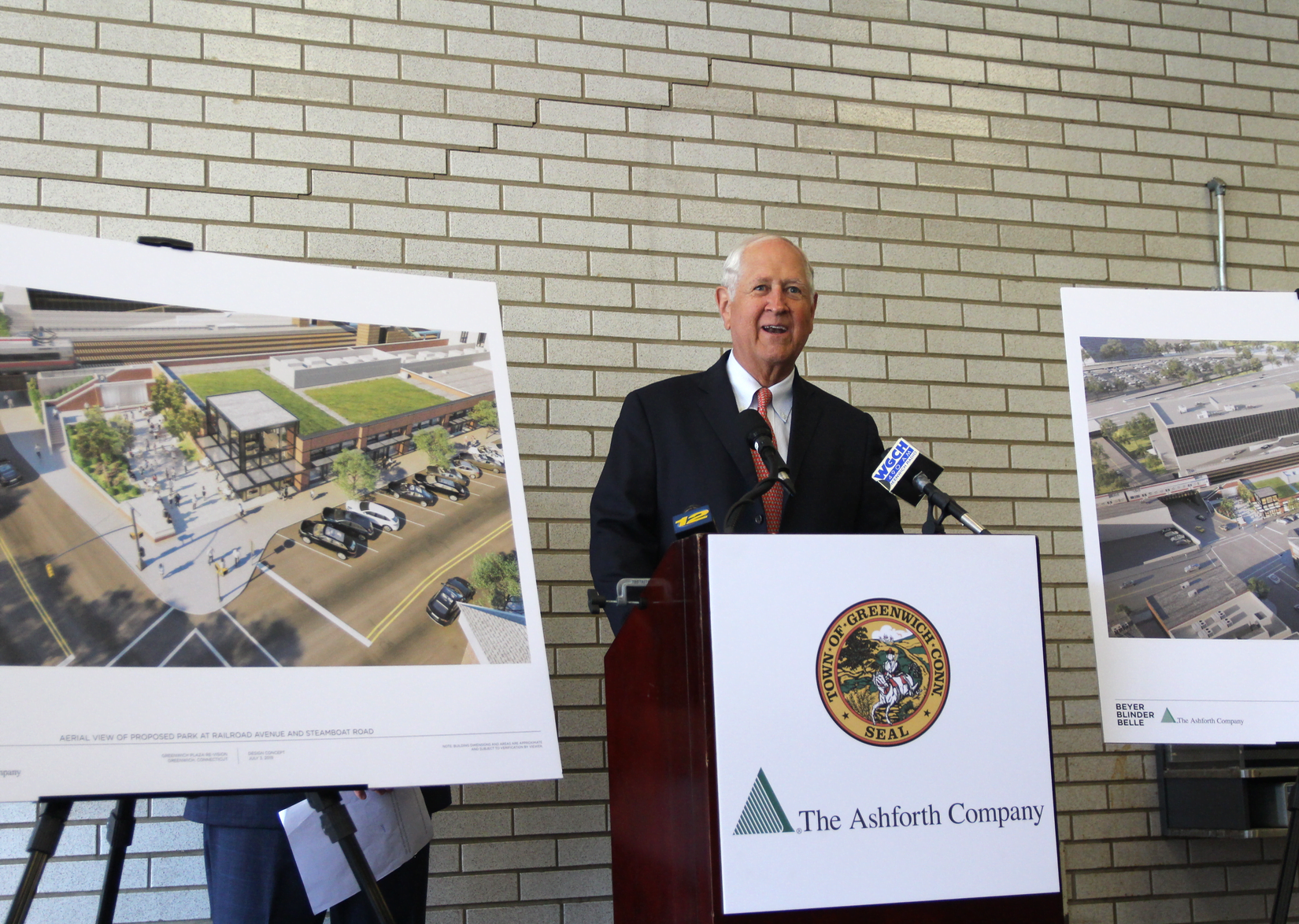 Co-CEO of The Ashforth Company Darrell Harvey said 50 years ago when Greenwich Plaza was first developed in partnership with the Town of Greenwich, “It was viewed as a tremendous improvement over the previous station, and it was, but it has outlasted its time.” The Town of Greenwich first partnered with Ashforth in 1967 when Greenwich Plaza was developed.  Mr. Harvey said his organization has been in direct consultation with the Town over the past five years and thanked First Selectman Peter Tesei, Town Administrator Ben Branyan and Town Planner Katie DeLuca. July 9, 2019 Photo: Leslie Yager 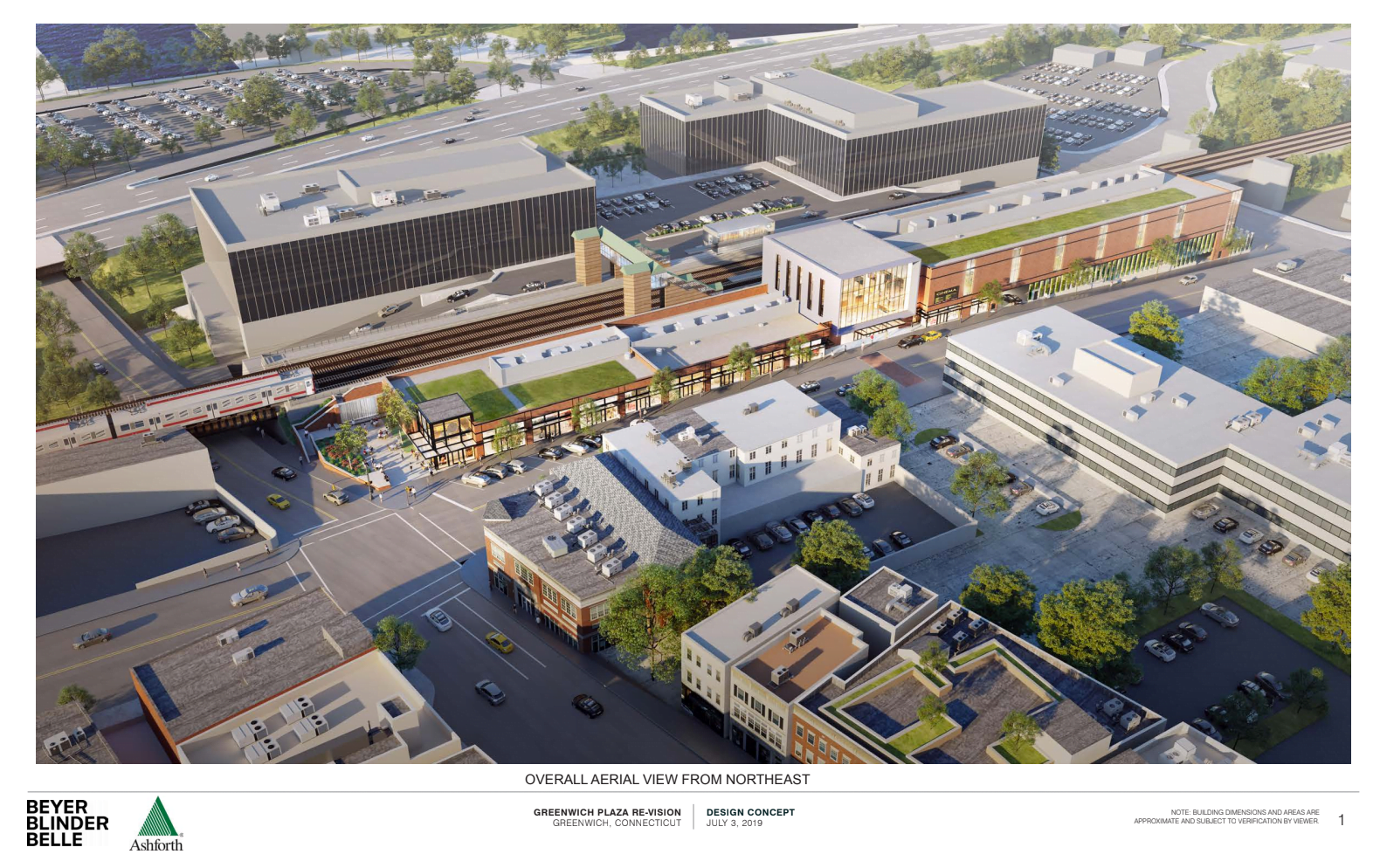 The property owned by Ashforth Company runs the full block along Railroad Ave from Steamboat Road to Arch Street.

The Town’s participation stems from it owning the air rights to the property.

The proposal will of course have to work its way through an extensive public process and go before Board of Selectmen and the Planning & Zoning Commission. The project will need to have a Municipal Improvement approved.

The Town’s relationship with the Ashforth Company started about 50 years ago, and Greenwich Plaza was an improvement over the existing station at the time, but today needs updating and modernization.

The project includes an entirely new train station to replace the existing one on the north side of the tracks, a new train station on the south side of the tracks, expanded and improved drop-off and pick-up areas for both stations, new pedestrian and commuter pathways, a new privately-owned public park on the corner of Greenwich Avenue and Railroad Avenue, new luxury movie theaters above the existing parking lot on Railroad Avenue, and modernized retail space along Railroad Avenue. 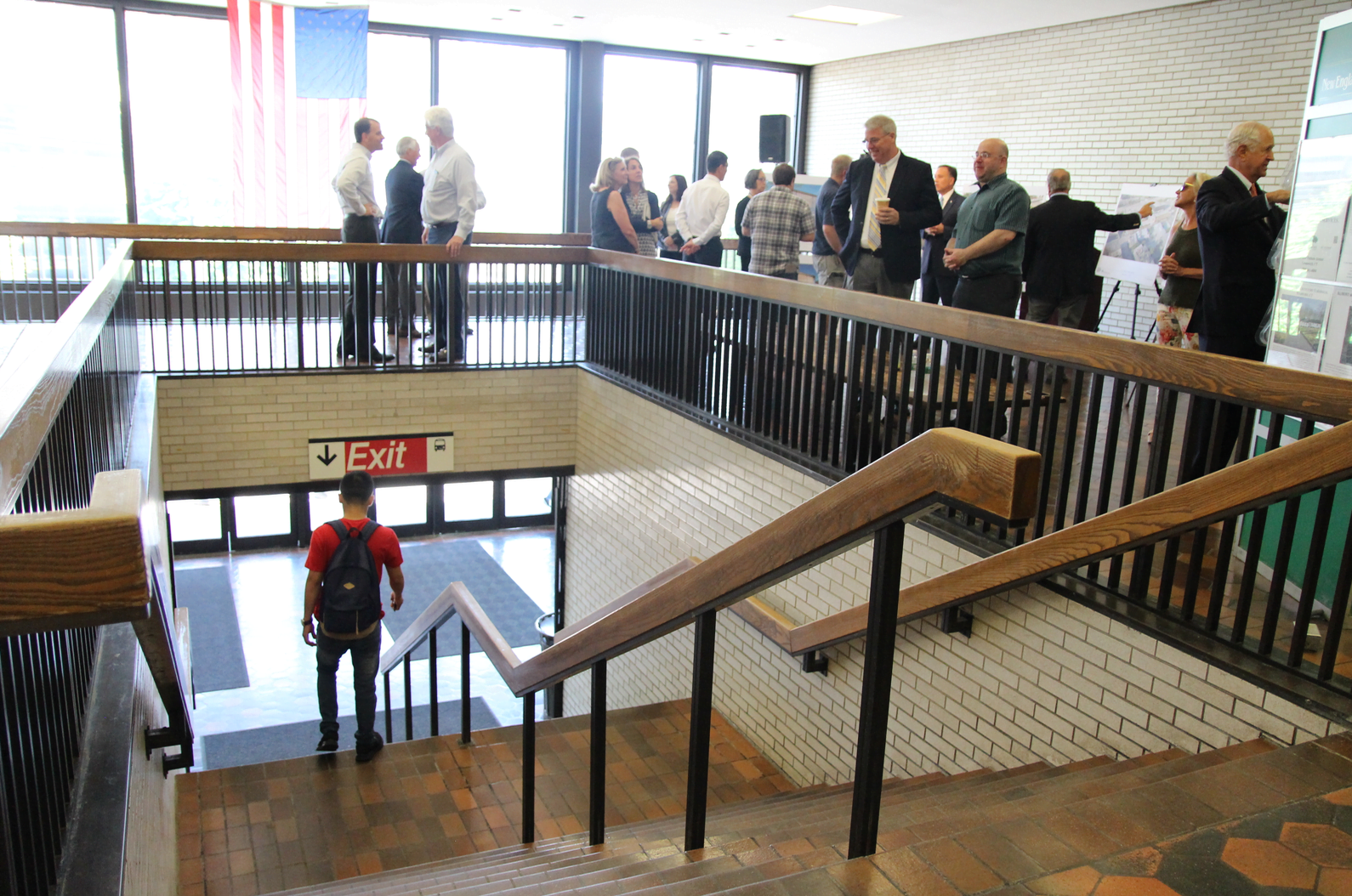 Currently the stairs are in the middle of the train station.July 9, 2019 Photo: Leslie Yager 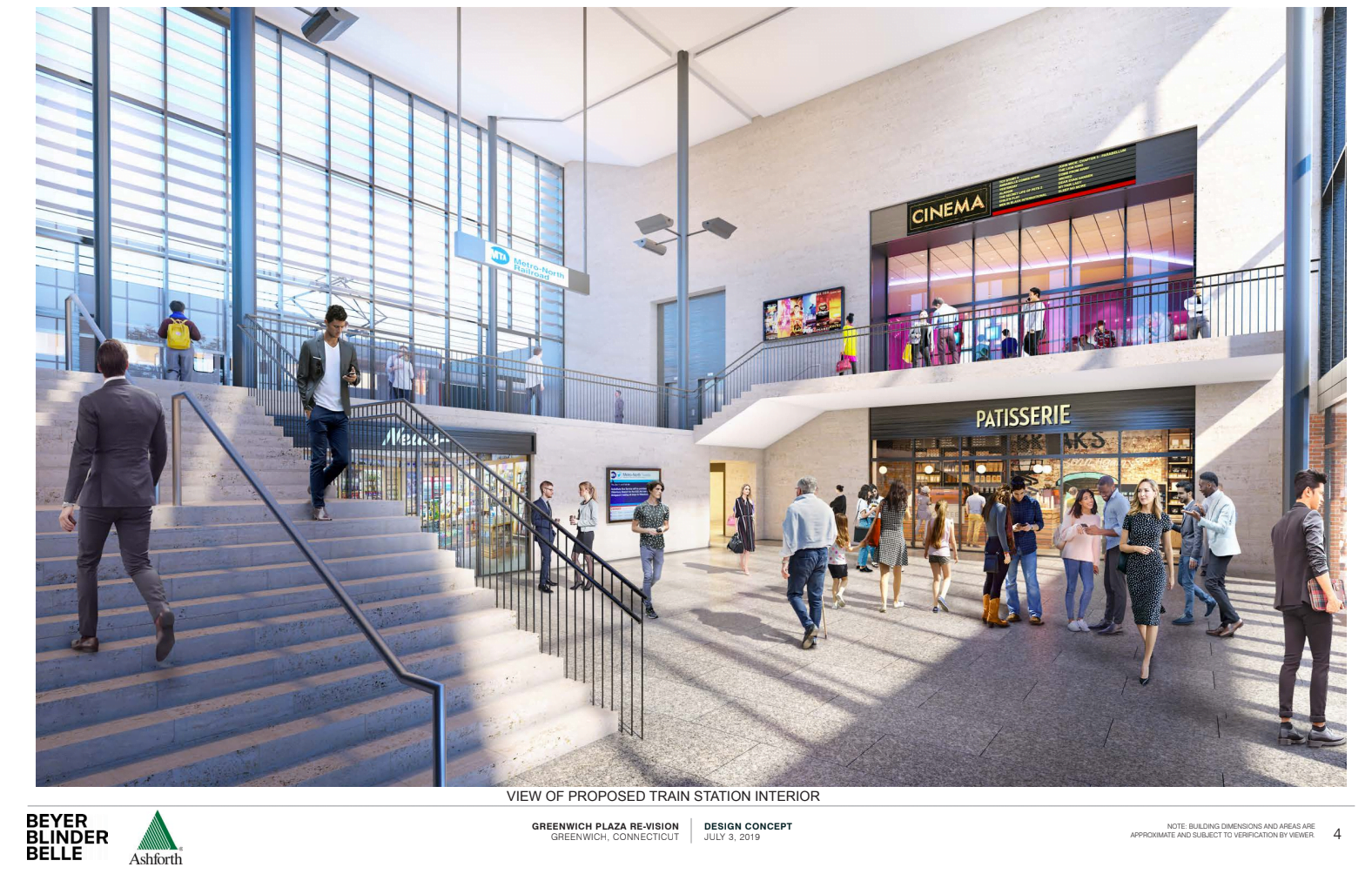 Whereas currently the stairs tot he lobby and platform at the train station come from the middle, in the new station, the stairway will be pushed to the side and lead to the platform and the movie theater entrance.

The architectural firm of Beyer Blinder Belle is designing the project. Architect Frank Prial, who led the restoration of Grand Central Terminal project for the Metropolitan Transportation Authority, described the project, which was just filed with P&Z on Monday.

Prial, who mentioned he was also involved in the Restoration Hardware project at the historic US Post Office on Greenwich Ave, said the new train station will incorporate lessons learned from Grand Central Station.

“It’s a place to gather, a place to celebrate Greenwich,” he said. “We see it as a portal.”

“It will be a generous space. It will be tall. It will be a place of honor and civic grandeur but also a very functional place where people can easily access trains. It will also be the lobby to a lovely and extensive multiplex theater. There will also be a new public park on the corner of Steamboat Rd and Railroad Ave, and a new station on the south side as well to accommodate people commuting in the opposite direction.” – Architect Frank Prial of Beyer Blinder Belle 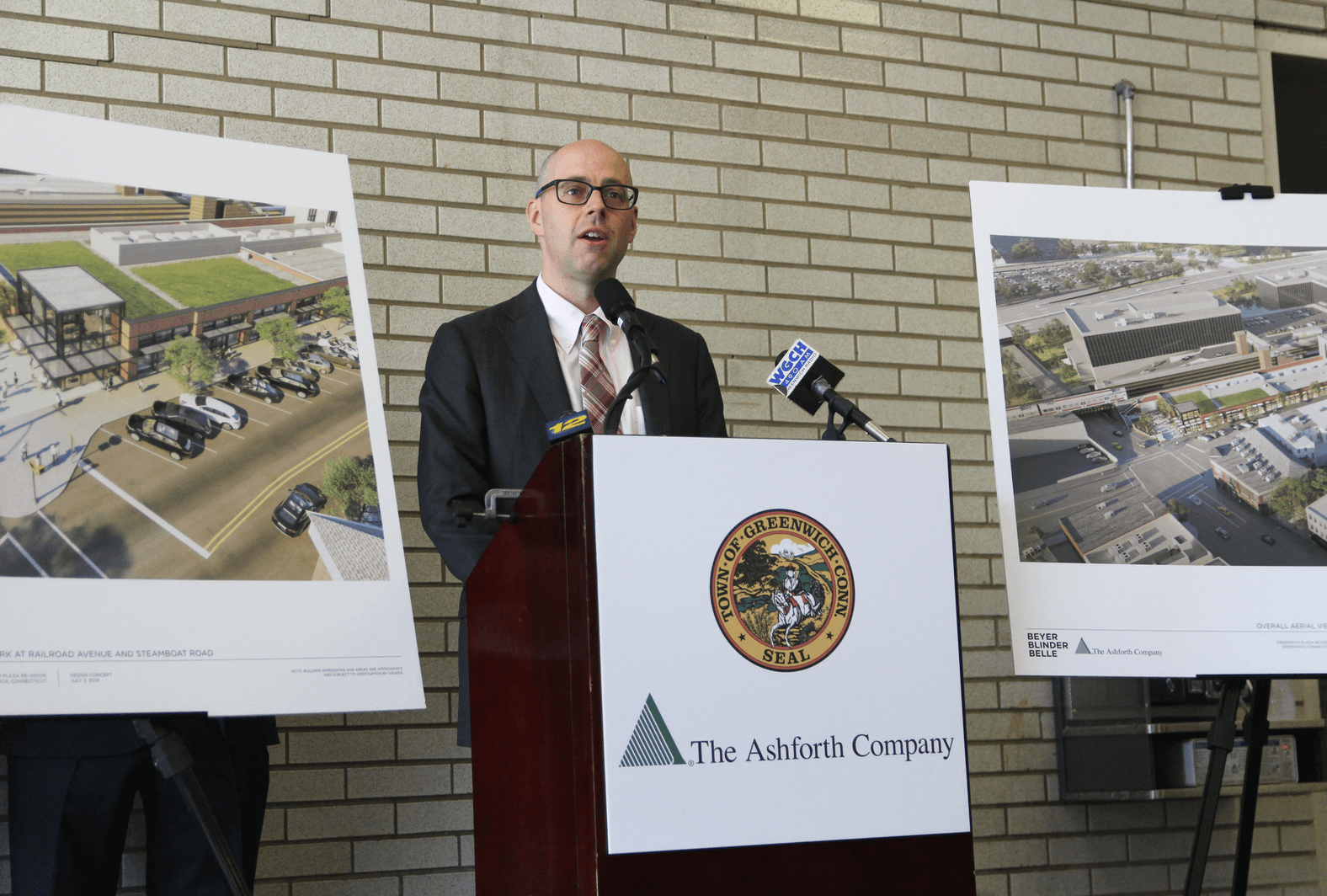 “Rail service is no longer for commuters. We’re seeing increasing interest in rail. This station serves 4,000 people a day,” Andreski said. “This is the busiest rail line in the US. Over 130,000 people a day travel on this rail line, which is the backbone of the state’s economy.”

As part of this transfer, the Town also will receive a perpetual easement for the use of all of the A-level commuter lot, including the portion owned by Greenwich Plaza, replacing the license currently held by the Town which expires at the end of the air rights lease. 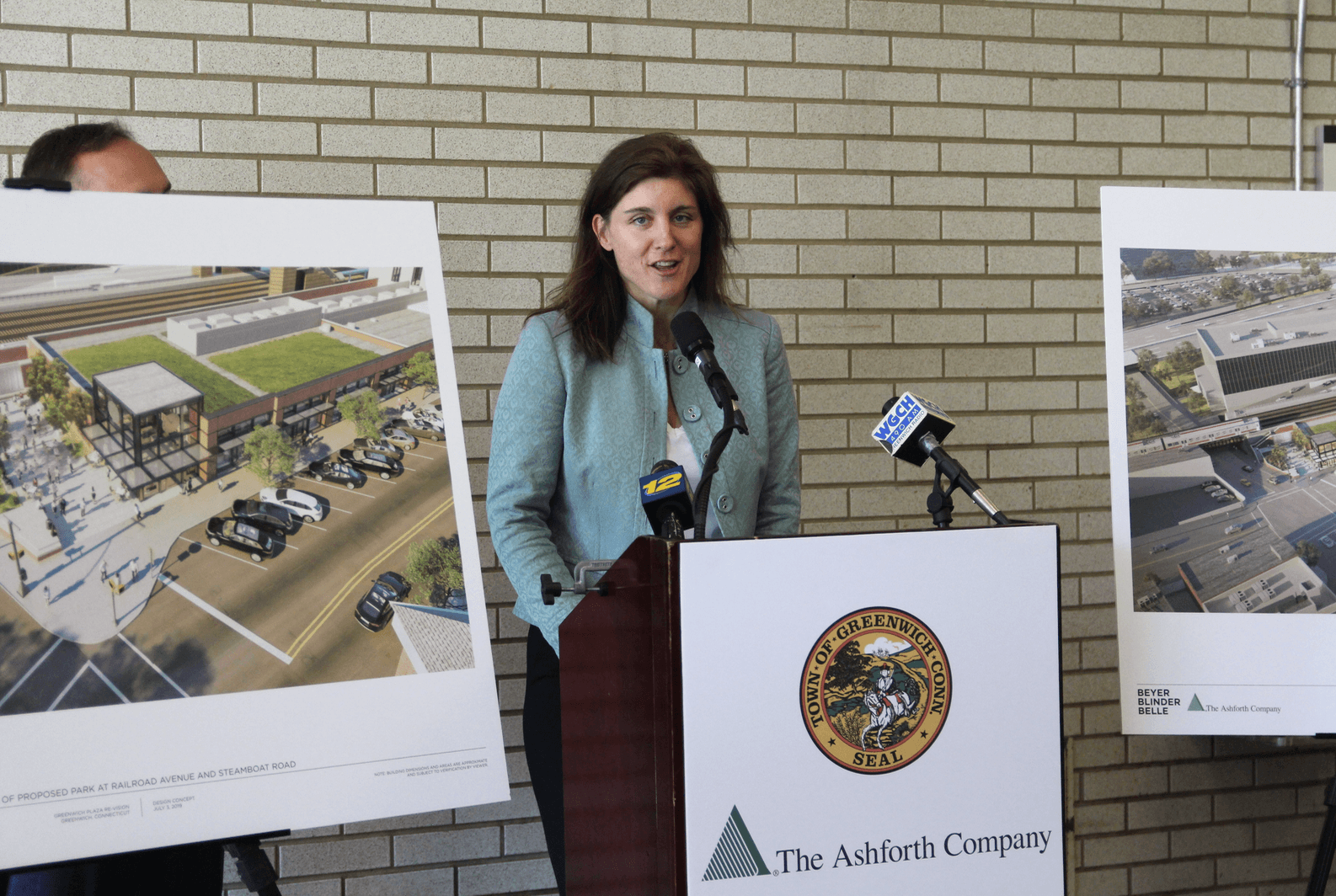 Town Planner Katie DeLuca said the first public hearing on the proposal will be on July 30 at the P&Z meeting. Photo: Leslie Yager

“Incorporated into the plan is the creation of a public park space on the corner where the movie theater presently sits,” Tesei said. “That will be funded with the valuation for the air rights, and what their worth is. That figure is professionally arrived at through town sanctioned appraisers.”

Senator Bergstein said she was thrilled to see the architectural renderings for the first time.

“I wanted to point out there is a green roof, which I love! It shows we’re not just a destination for businesses. It shows we’re a very forward-looking state with advanced environmental policies,” she said.

Mr. Tesei said the project is one of several improvements taking place in downtown Greenwich, including the new Bruce Museum facility, efforts to maximize and improve the waterfront at Roger Sherman Baldwin Park and the new Steamboat Road pier, which is being unveiled later this week. 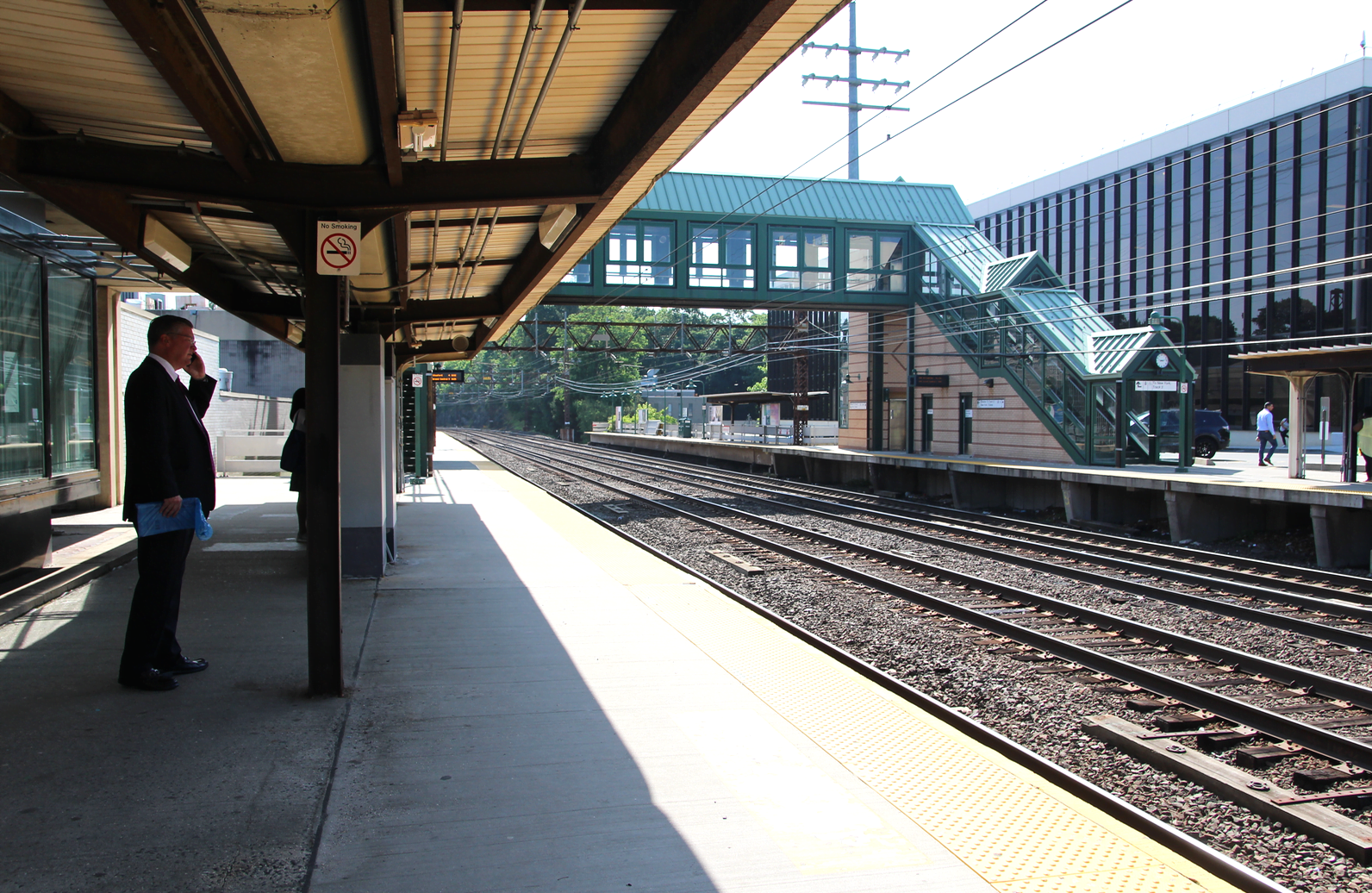 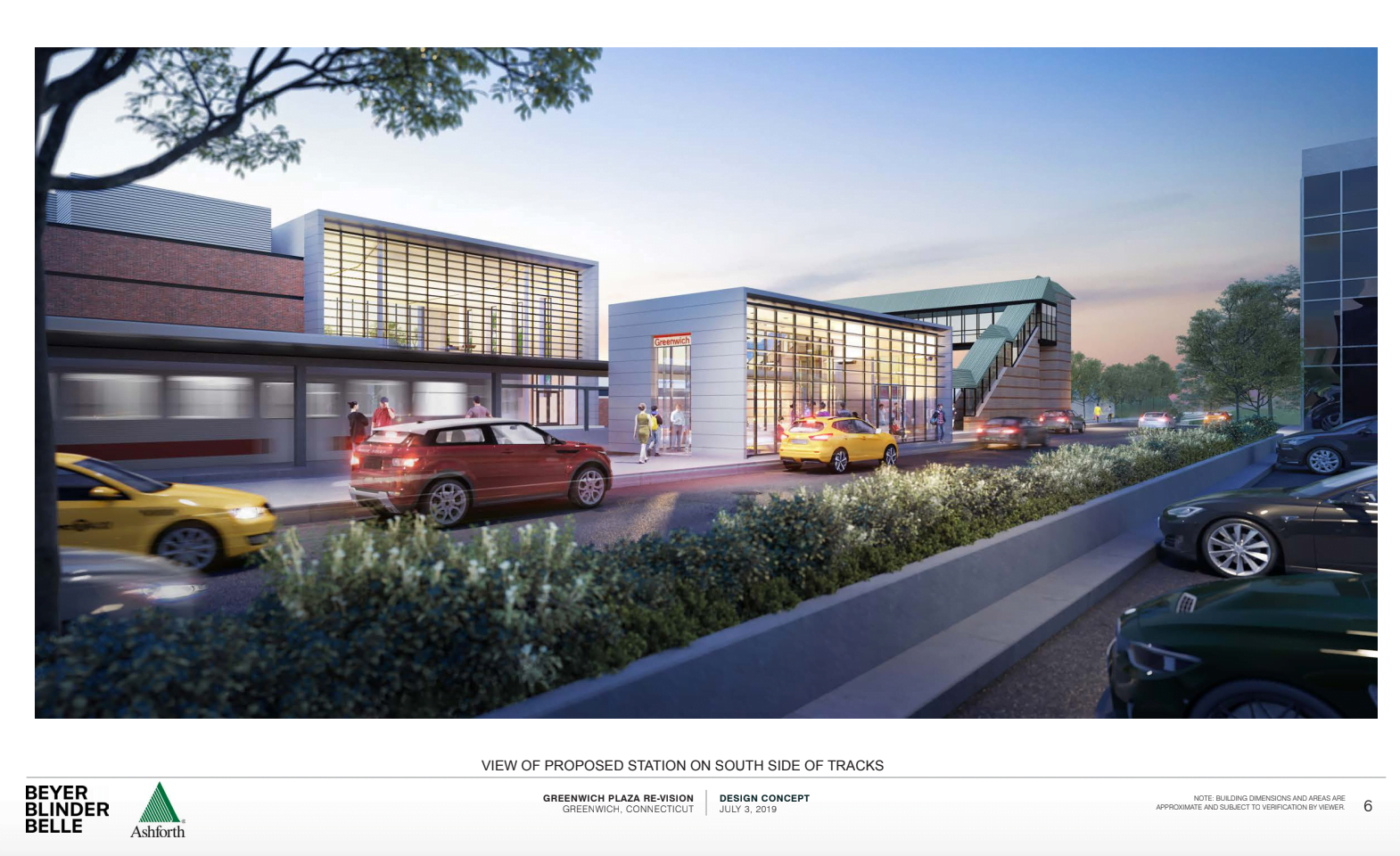 View of proposed station on the south side of the railroad tracks. Beyer Blinder Belle rendering