On Monday night Board of Education voted unanimously to override the administration’s decision to deny transportation to Eagle Hill Students in Greenwich. For now. The issue is not black and white and there are the issues of setting precedent and treating all private schools equally.

At the beginning of the meeting the district’s director of operations, Lori Ann O’Donnell said the administration’s recommendation was to adhere to the transportation policy, which is to not transport students once the private school has an enrollment of 50% or more from outside the state. That put Eagle Hill School in the district’s cross-hairs.

At the last BOE meeting of the year, about 30 Eagle Hill School parents and many children testified that the decision was unfair and had caught them off guard as it would to go into effect in the fall.

One parent made the point that her daughter felt part of the school community by riding the bus and had formed friendships on the ride.

“We recommend not reinstating the busing,” O’Donnell said at the beginning of the Monday night meeting.

The policy Governance Committee (PGC) consensus was that the district should not provide busing for Eagle Hill School during the 2019-2020 school year based on the fact that the school does not meet eligibility per CT statute Section 10-281, which stipulates that in order to be eligible a “majority of children are residents of Connecticut. ”

Private schools are each obligated to report to the State the number of students from Connecticut. That report is due in October.

During the meeting Carmel Academy and the Japanese School, who share an address at 270 Lake Ave  were mentioned specifically.

Ms O’Donnell had pointed out that another private school has 56% students from CT, but if that number diminishes, they could lose transportation service.

Another challenge is that it is difficult to determine the cost of transporting the 44 student from Eagle Hill without completed routes for the upcoming school year.

But based on data from the district’s transportation department, it costs the district $3,738 per student.

Dr. Gaetane Francis, a member of the Policy Governance Committee (PGC) said her committee had met to discuss the issue but not taken a vote. She said they looked at state statute and policies of nearby districts including Stamford.

“They put it right in there that it’s required (to provide transportation) for any school with 50% or more for Connecticut residents, and obviously both public and private schools.”

“There is a cap of how much you’re required to pay per pupil, though there is room for negotiations,” she added.

“The core policy is one from CT Association of Boards of Education (CABE) that serves all 140 CT school boards that belong,” Ms Dayton pointed out.

“We took the CABE policy, and language from the state statute about the 50%, which is not in CABE policy, but it is in the statute. The one sentence we added is asking for the data that is required to go to the state,” Dr. Francis said, referring to the data that comes from each private school. “The requirement from the state is you have to supply (transportation) above a percentage unless there is a cost that is excessive. Then you can negotiate with them.”

Meghan Olsson was the first to push back. “I know we have to be careful about setting precedent, but this pulled the rug out from parents. Is it possible to have a grace period?” she asked.

O’Donnell said the district spends $9.6 million on busing of which roughly 20% is for private schools.

BOE member Kathleen Stowe pointed out that Greenwich is unique because it has a high number of private school students and is close to the New York state border.

She said what the board decides to do about Eagle Hill is significant because it could set a precedent and a new private school might be established.

“That scares me given how tight the the budget is,” she said.

“Stamford caps how much it’s required to pay, and under state law, if the cost is twice what you’d pay for a public school student, you’re not required to pay,” BOE member Jennifer Dayton said, adding that the board does not yet have the data on bus tiers and bus routes for the fall. “PGC should continue its work. Our policy has room for more specific guard rails.”

“I don’t think it’s fair to to have this decision come so quickly,” said BOE member Meghan Olsson who is not running for another term as her family is planning a move away from Greenwich. “There is discretion under the 50%. I think it makes sense to have a grace period so parents aren’t suddenly aware of something that changes their entire family’s needs and their work schedules.”

Mr. Sherr said the only students Greenwich does not provide transportation for are the the ones at Carmel Academy and the Japanese School.

Ms. Donnell said as of last October there are there are 11 Greenwich residents attending the Japanese and 24 attending Carmel.

“I’d leave this alone and not take the administration’ recommendation. It’s too divisive,” Mr. Sherr said. “PGC needs input. I think we should be talking about changes in the future and not doing this on the fly. There is no urgency to do this. It’s already fully funded in the budget. It’s too disruptive and puts an irritant between public schools and private schools.”

“We shouldn’t treat different private schools differently,” Ms. Dayton said. “My quandary is we didn’t get the data in time to craft it in time to do our budgeting. I’m annoyed we had to seek it out.”

Ms. O’Donnell confirmed she had had to reach out to each private school for their data because they do not do it proactively.

“I can’t see a way to base our decision on solid data,” Ms. Dayton said. “I don’t have a cost number. I don’t know how many students will come forward. This is a terrible sequence of events. That did not have us properly budget. And we don’t want to carry that forward to the future.”

“Ralph (former superintendent Ralph Mayo) told us therefore your choice is take it away from Eagle Hill School or potentially add the few students from Carmel Academy and the Japanese School into the existing network,” Mr. Sherr said, making a motion to provide  transportation for all public, private and parochial school students within the Town of Greenwich for the 2019 to 2020 school year.

Mr. Bernstein said, “I’m uncomfortable with grandfathering Eagle Hill while we doctor our policy. Saying, ‘for all private school students who reside in Greenwich’ – that would extend transportation regardless of what their student ratio is.”

“Does your motion recommend deficit spending if necessary to cover all schools to exceed what is under the budget under the transportation category?” Ms Dayton asked. “Are you willing to overspend the budget to accommodate any changes in enrollment and any request from all types of private schools?”

Ms. Stowe again said there are unknowns. “We could have a (new) private school tomorrow and 100 kids being sent to back country on a bus,” she said.

“If we made any exceptions we’d be changing our policy,” Ms O’Neill said. “It’s not a simple decision. I don’t like pitting one school against another. It’s not economics, it’s about policy.”

“It’s an important policy. It’s too important to change for a situation,” she continued. “It requires more study. Our policy says ‘to the extent required by law.'”

“I mention a suspension or grace period because I don’t think it’s fair to parents,” Ms Olsson said, adding that Eagle Hill parents just learned in June their children would be losing their bus service in September.

The bus network is designed to accommodate 5,500 students.

“Our policy is not clear,” Mr. Sherr said. “There is doughnut hole in our policy. State law doesn’t say what you have to do (when the enrollment is) below 50%.”

The PGC will continue to study the issue for the future. 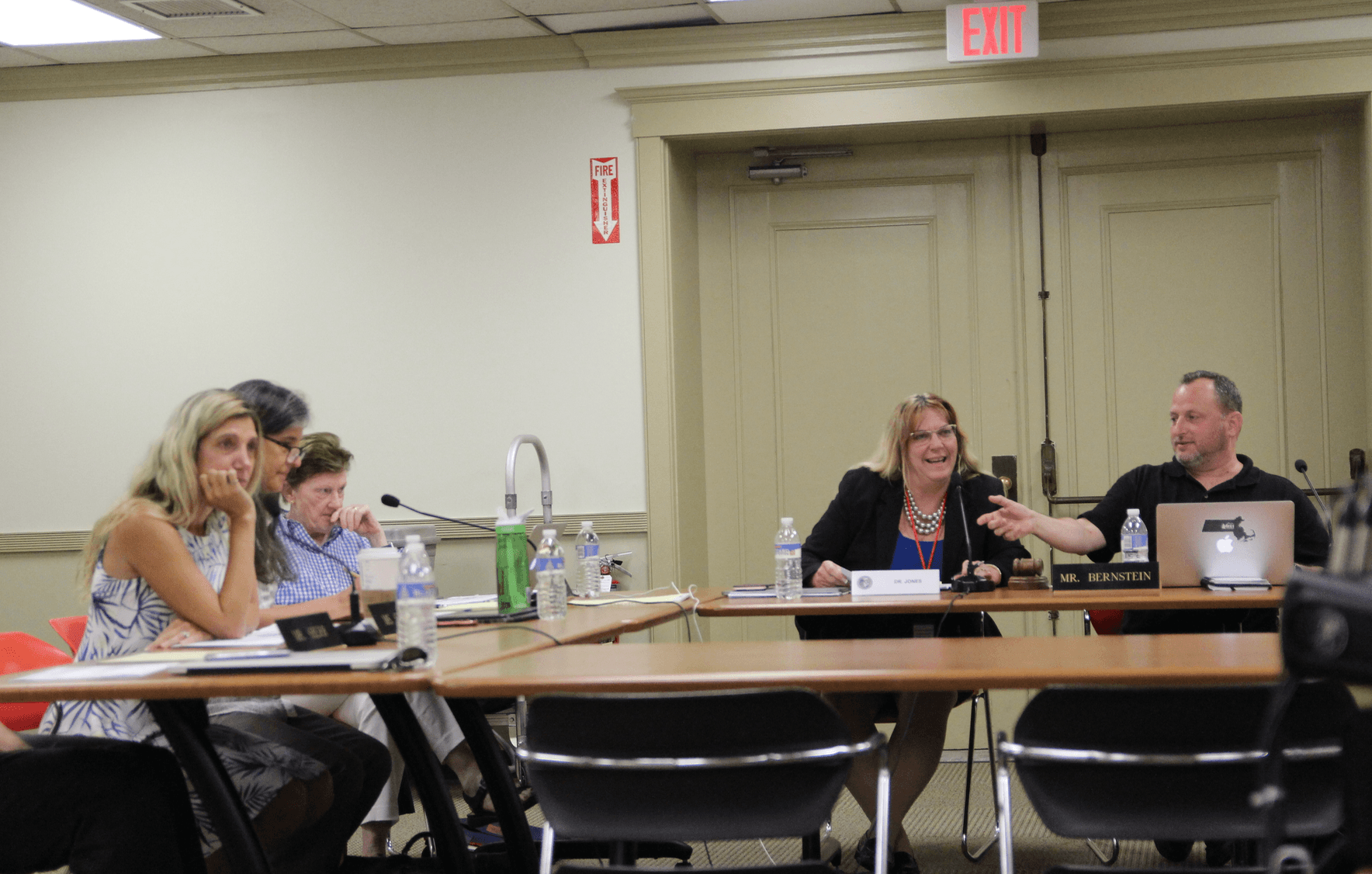 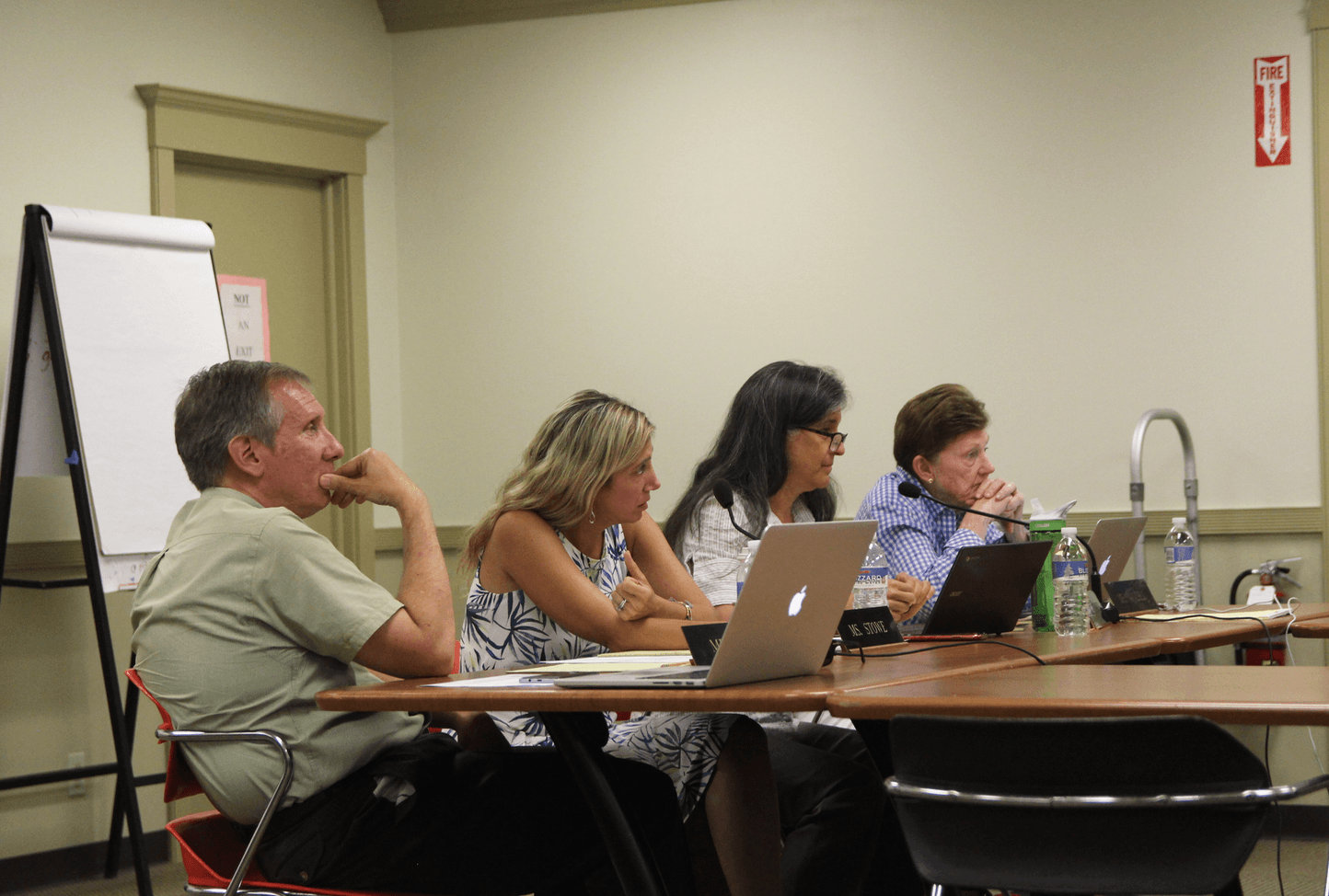 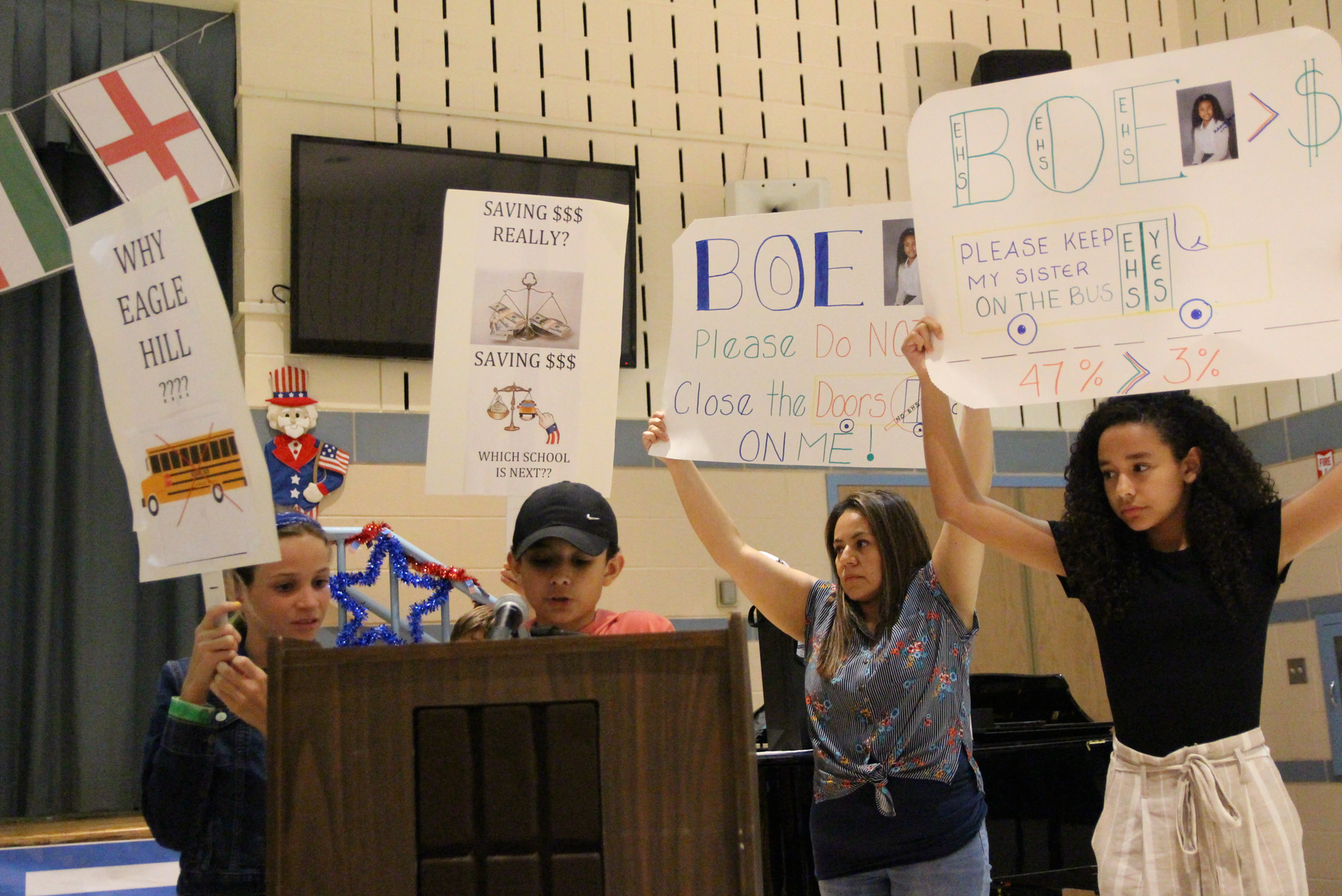 Families took the opportunity to voice their objection to loss of transportation to Eagle Hill School during the public hearing portion of the June, 2019 BOE meeting at Cos Cob School. June 13, 2019. Photo: Leslie Yager