At the newly opened Spot on Veterinary Hospital and Hotel just over the Greenwich town line in Stamford, the spanking new facility had dual doors – one for the a veterinary hospital, and one for the pet day care, grooming and boarding facility.

But there is a third aspect of Spot On that is truly unique: a dedicated pet adoption center.

Not only are there separate areas for dogs and cats, but the space is set up with a homelike feel.

About 10 days ago the facility received its first two dogs. Dr. Philip Putter, who started the business in a building that formerly housed a sail rigging company, was loath to call the dogs homeless.

“They’re not homeless when they’re here. They are a pet.” – Dr. Philip Putter, owner and founder of Spot On

And therein lies the difference between a typical shelter and the adoption center at Spot On.

“We’re more likely to see what they’d be like in a home environment because here they’re not in a cage,” said Putter who has multiple rescue dogs, including one he found in a garbage can and one he found on the side of the road.

“It’s hard to get to get a sense of how a dog will behave in your home when you meet him in a typical shelter,” Putter said.

“Coming out of a conventional shelter environment, a dog’s behavior inevitably changes after two weeks in a home. You can have a placid dog in the shelter who become wild and crazy in a home, and vice versa.” 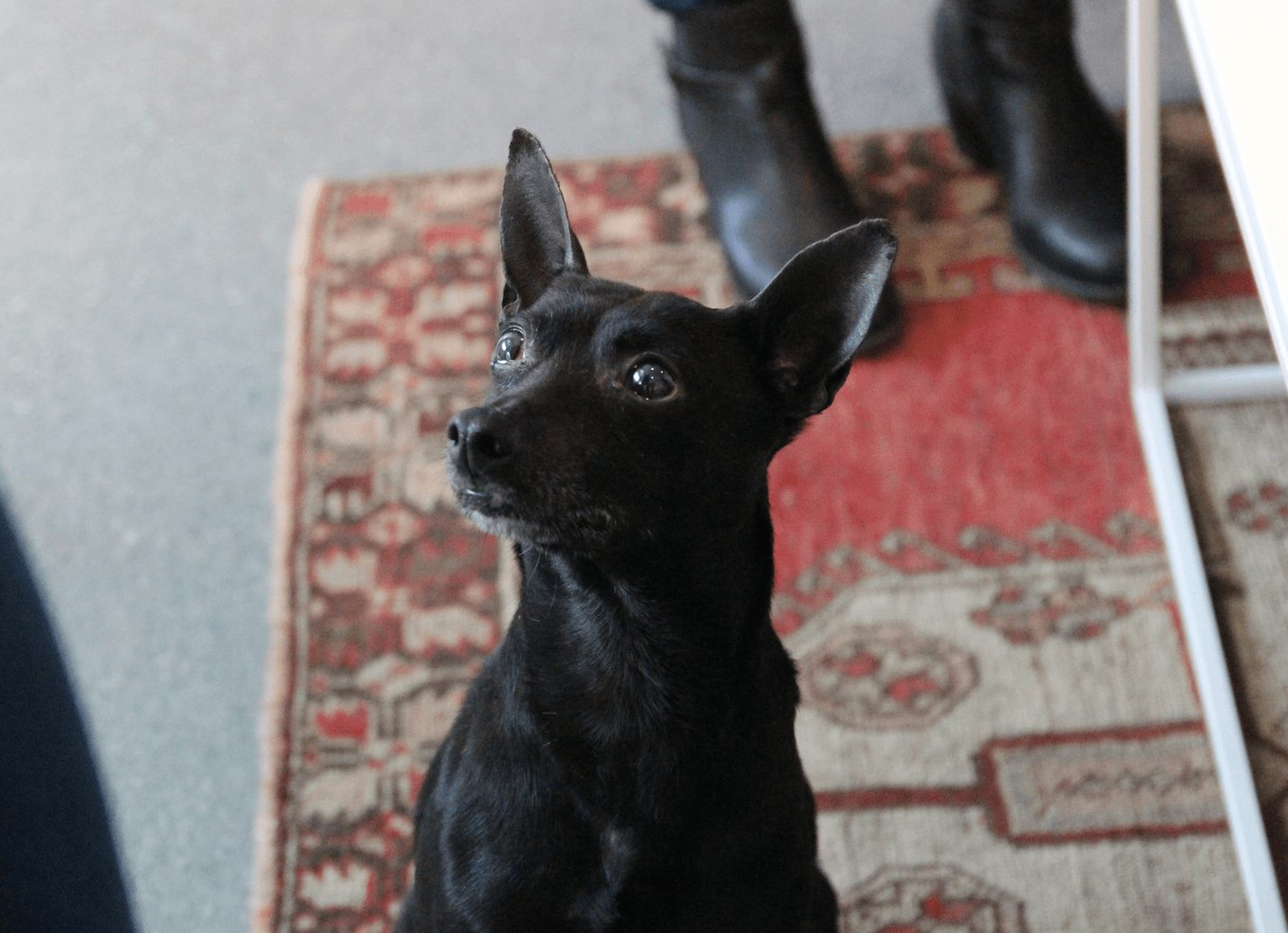 In Spot On’s homelike environment, the idea is to allow dogs to feel at home and ease their transition to permanent homes.

“Their care is individualized and they have access to all the same facilities as dogs who are in day care,” Putter said.

“It’s a shelter palace!” said Katie Hollinden who works in the adoption center. “They get play time. And walks. This guy loves long walks,” she said, referring to Sammie who was warmly ensconced in her lap.

Sammie and Stevie, a pair of 9-1/2 year Miniature Pinscher mixes, have settled in nicely at Spot On, after initially being disoriented.

Their first owner had passed away and a relative who was caring for them became ill and could no longer care for them. A third relative demurred. Having tried unsuccessfully to relinquish  to animal hospitals and municipal shelters, Spot On agreed to take them.

Throughout the day, dogs are tended to by adoption coordinators in a homelike setting that includes a sofa, TV and coffee table. Better yet, each dog has their own glass fronted space that is a far cry from a typical shelter cage, and more like a bedroom. Eight individual rooms have access to the communal living room for socialization and training from a dedicated caregiver.

Despite having shown signs of neglect, having likely had to vie for food and attention, Sammie and Stevie’s personalities have emerged.

On Monday Sammie was nestled in Hollinden’s lap, but got up to greet Dr. Putter when he arrived. Later, he cautiously introduced himself to visitors on the sofa. 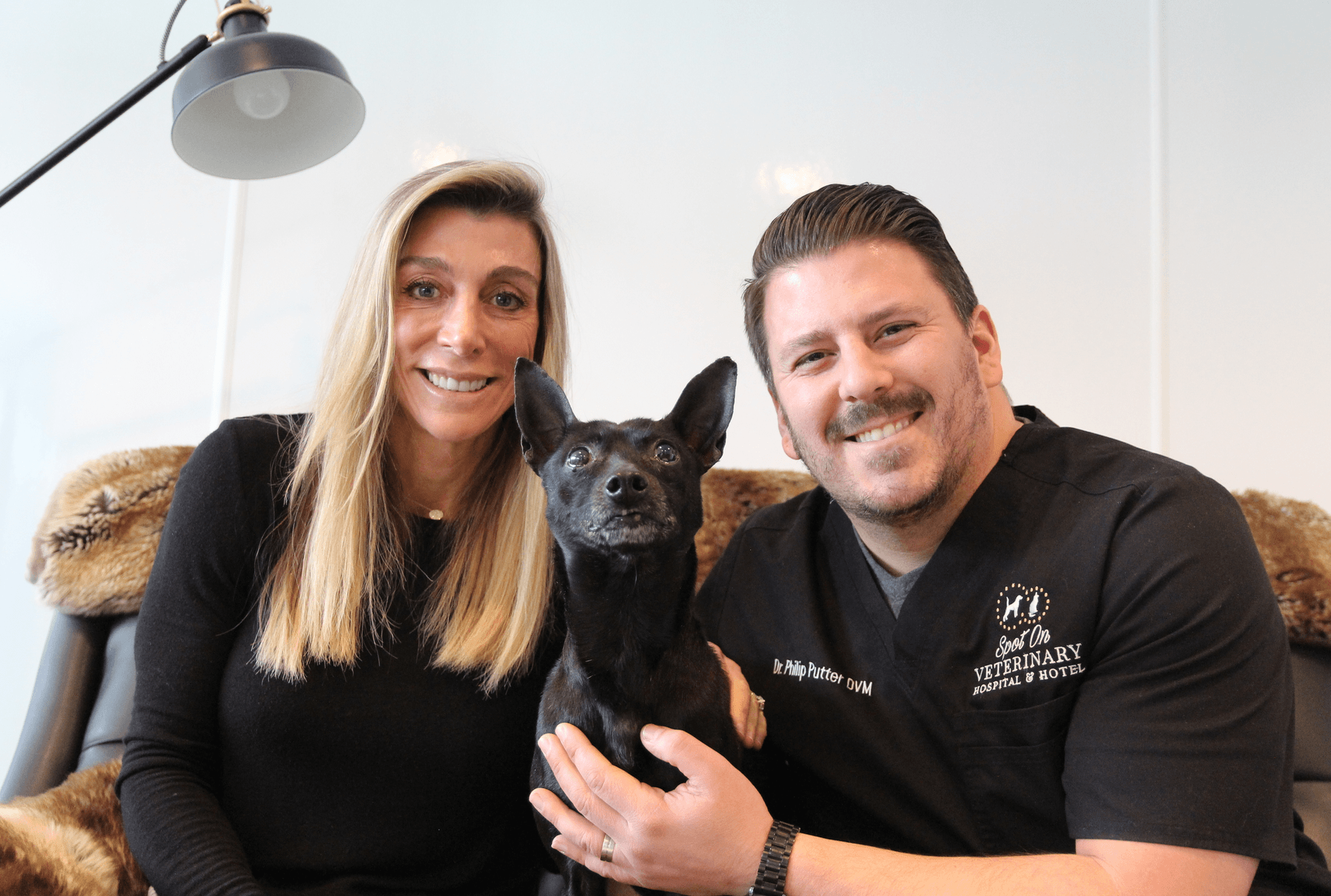 The adoption center was made possible through the generosity of Brooke Garden, a resident of Greenwich whose dogs have been cared for by Dr. Putter.

“I get upset when I go into shelters because the dogs look like they’re in prison in their cages all day,” she said. “I thought, there has to be a happier solution.”

After reading countless compelling stories dogs on Facebook, and randomly donating to support their rescue or medical care, Ms. Garden was happy to subsidize the adoption center, in the hopes of a less piecemeal effort.

On Monday Ms. Garden she was eager to finish hiring staff for the adoption center (previous shelter medicine experience encouraged) and put the finishing touches on the adoption application.

“It makes me happy to see a dog so happy in a shelter,” she said. “This is an experiment. This is new – to offer this level of care.”

“Would you more likely adopt – this dog or the one jumping on the cage barking and screaming?” Dr. Putter asked as Sammie’s eyes began to droop in sleepiness following all attention.

Sammie and Stevie, who will both be neutered shortly, also benefit from the attention of a behaviorist who visits Spot On.

Certainly Sammie is an affectionate lap dog, and, according to Hollinden, he loves long walks. On Monday, his sibling Stevie was downstairs at his appointment in the animal hospital.

“In the typical shelter situation, it’s harder to get veterinary care,” Putter said, adding that Spot On had diagnosed diabetes and cataracts in Stevie. “Because we’re capable of going further, we can prepare them to be ready medically to go home and have a pre- established relationship with a vet, as well as people familiar with the dog’s behavior and medical issues.” 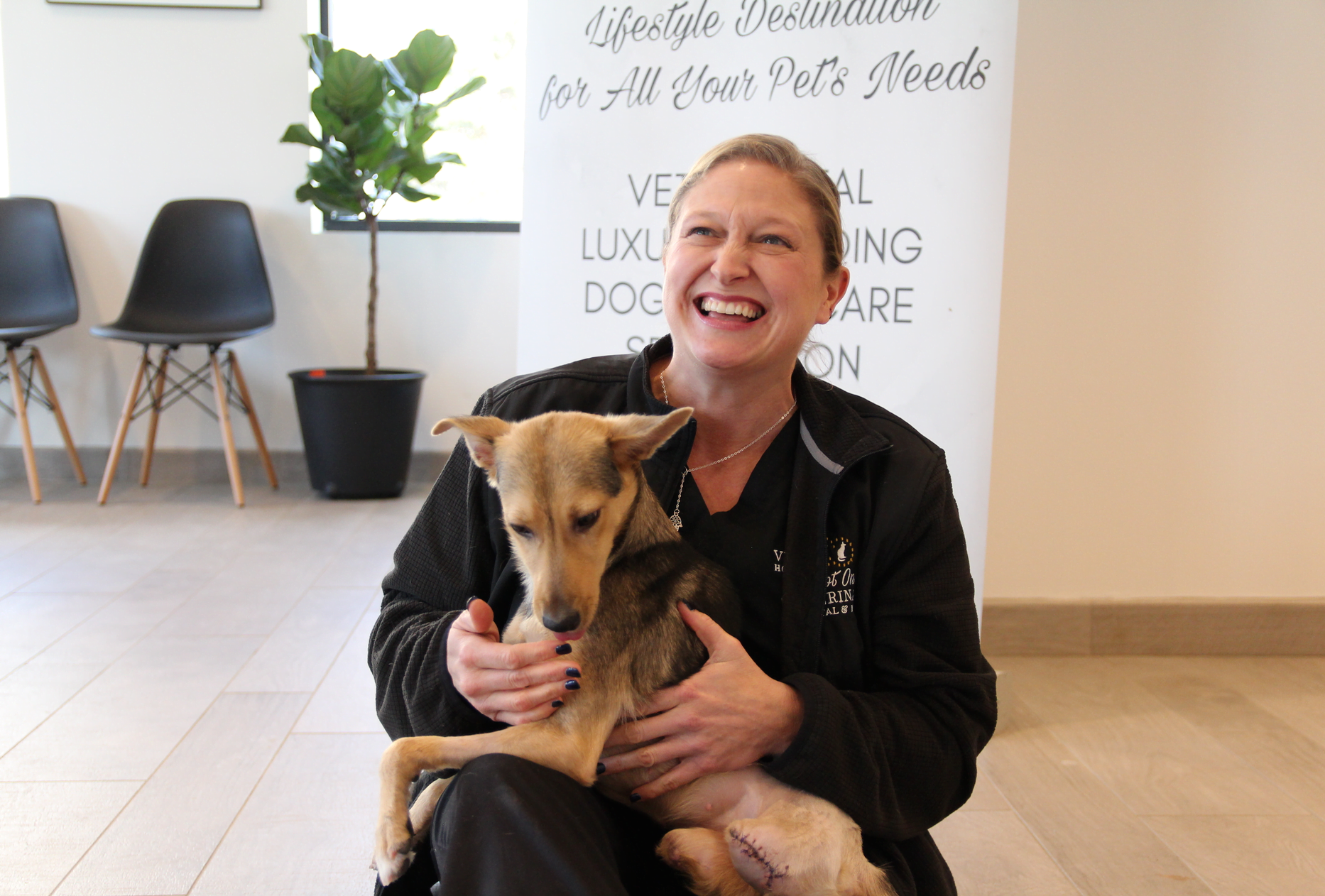 Kaeley Blum the director at Spot On, with her rescue dog Bubbles who was hit by a car in Jamaica and lost his rear two legs. Jan 9, 2018 Photo: Leslie Yager

“They have access to our high level of service at the vet hospital, including state of the art technology – CO2 laser and digital radiograph. We also do dentals on them. They aren’t shelter dogs, they’re our dogs.”

“These dogs get exactly what they need,” said Kaeley Blum the director at Spot On, who has extensive shelter and adoption experience. “The program is tailored to each pet. Some will go into day care. Others won’t. Not every shelter dog wants to be in a big group of dogs.”

“They get walked several times and they’re with people 13 hours a day,” Blum added.

The dogs also have access to a Disney-like play area right outside the adoption center. That is in addition to a 2,000 sq outdoor play yard that features a seasonal bone shaped swimming pool and lifeguards. The pool is raised up to look like an endless pool.

“We’re being very purposeful with this space. It is part of our intention to help the community. It’s not just a hospital,” Putter said. “The point is to really be a one-spot for everything you need, including rescuing an animal.”

Indeed the love of dogs is palpable at Spot On. The office dog is Bubbles, Ms. Blum’s two legged dog who was rescued from Jamaica after having been run over by a car. 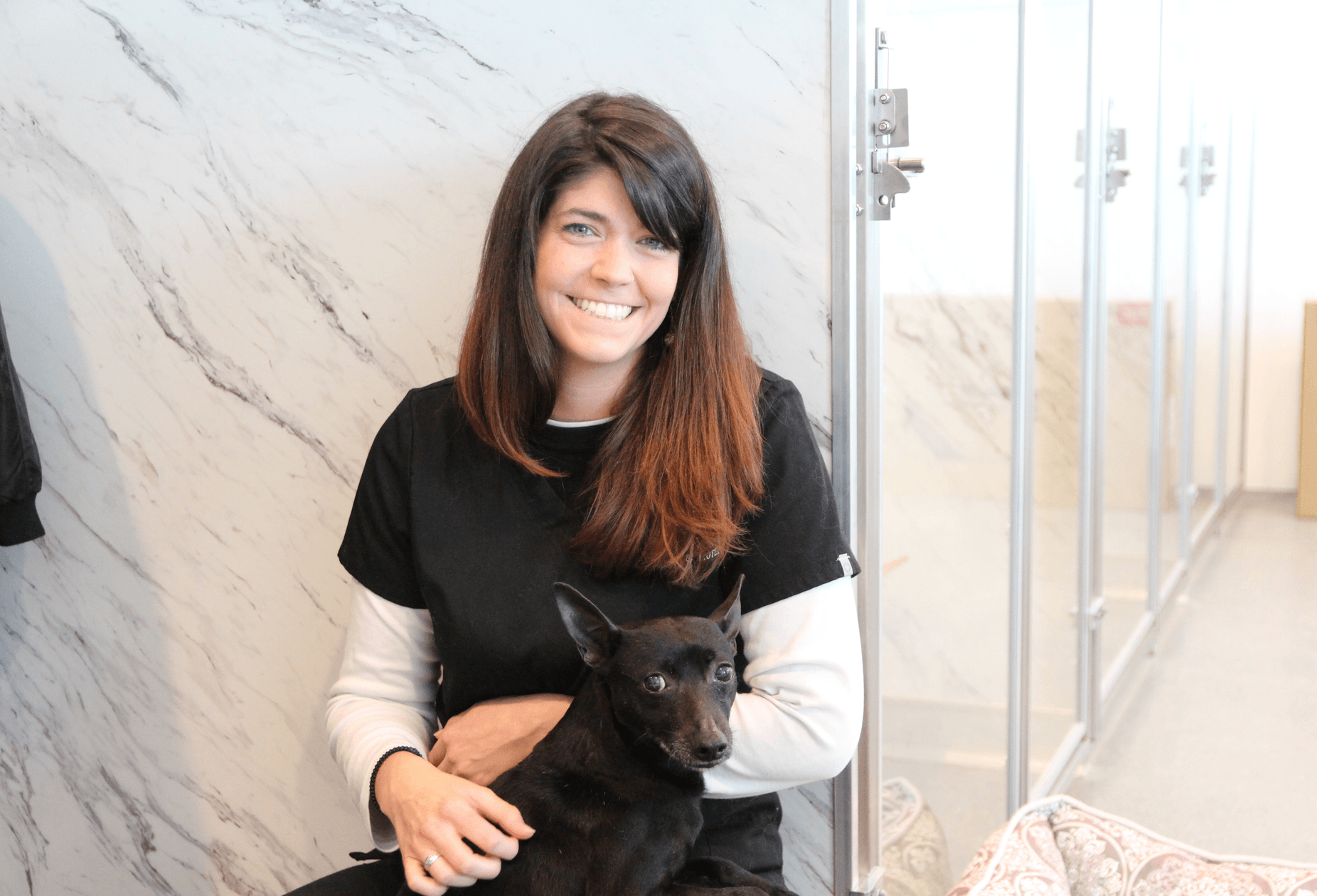 To apply to work in the Spot On adoption center, or to inquire about adopting a cat or dog, email [email protected]

Spot On Veterinary Hospital and Hotel is located at 184 Selleck Street in Stamford. Tel 203-973-SPOT.