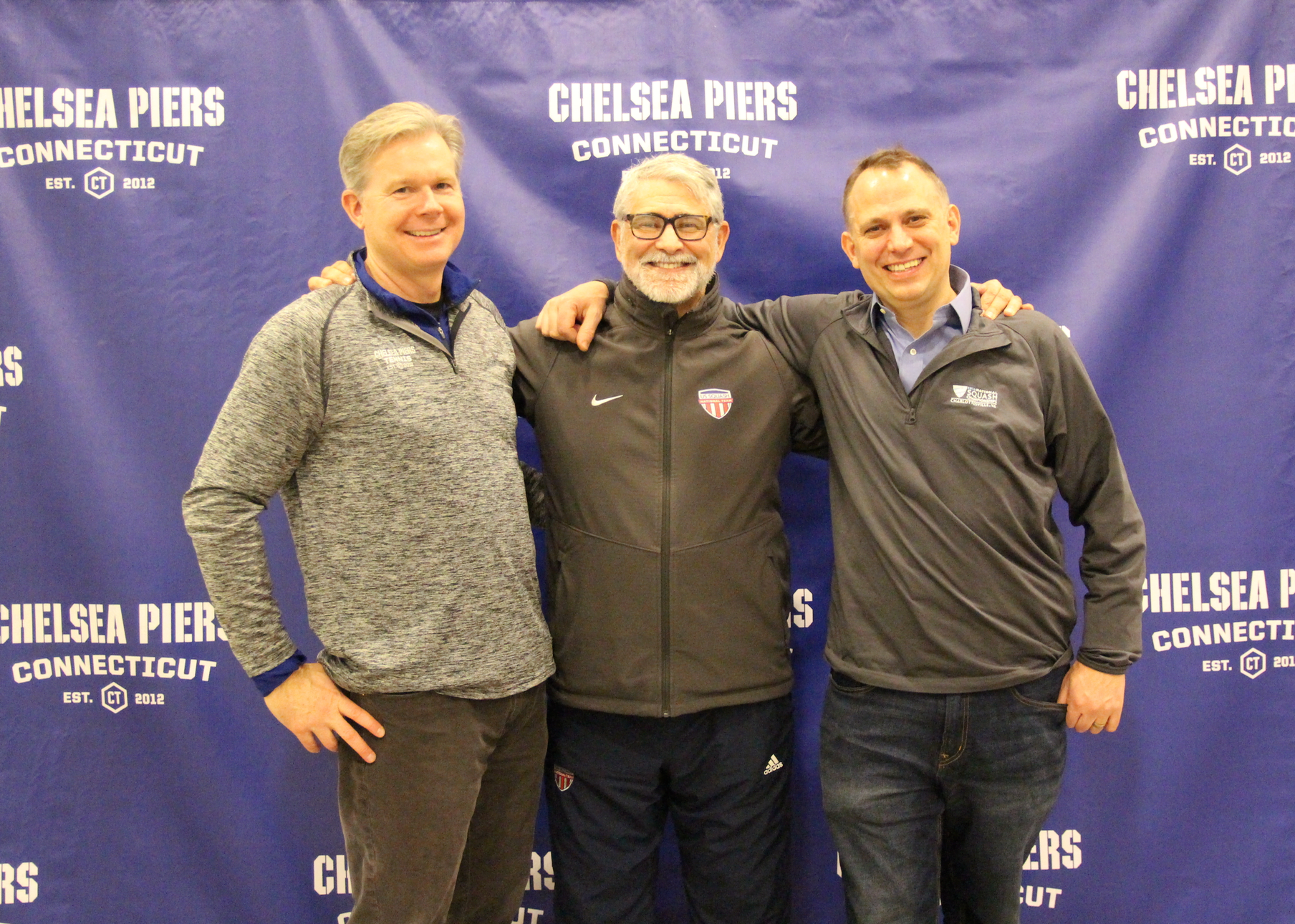 Squash players of all ages are increasingly drawn to Chelsea Piers in Stamford, where 11 singles courts and one doubles court beckon a growing number of athletes.

Tapping into the sport’s rising popularity, the sports and entertainment complex has scored big with the addition its new Squash Director, John Musto. The announcement of Musto’s hire dovetailed with a visit from legendary Squash coach Paul Assaiante.

On Monday night, about 50 Squash players and their parents gathered in The Loft where the Trinity College coach and US Squash Head National Coach – who is also a US Squash Hall of Famer – enumerated the pluses of college squash and how to prepare.

“Junior Squash in the US is up 700 percent in the last ten years,” Assaiante said, adding that there is greater access to facilities, including those at Chelsea Piers, and more programming in junior high, high school and college.

Moreover, Assaiante said parents like that Squash is not a helmet sport. “You have to trip to really get hurt here,” he said.

Another positive aspect of the sport, according to Assaiante, is that kids referee themselves during a game of Squash. “It’s a self-adjudicating activity. Two players have to play by the rules and if one doesn’t abide, they have to figure it out – just like in life!”

Assaiante said Squash is played year round during college. At Trinity College, where he is in his 25th season, the Bantams remain one of the most feared in college sports. 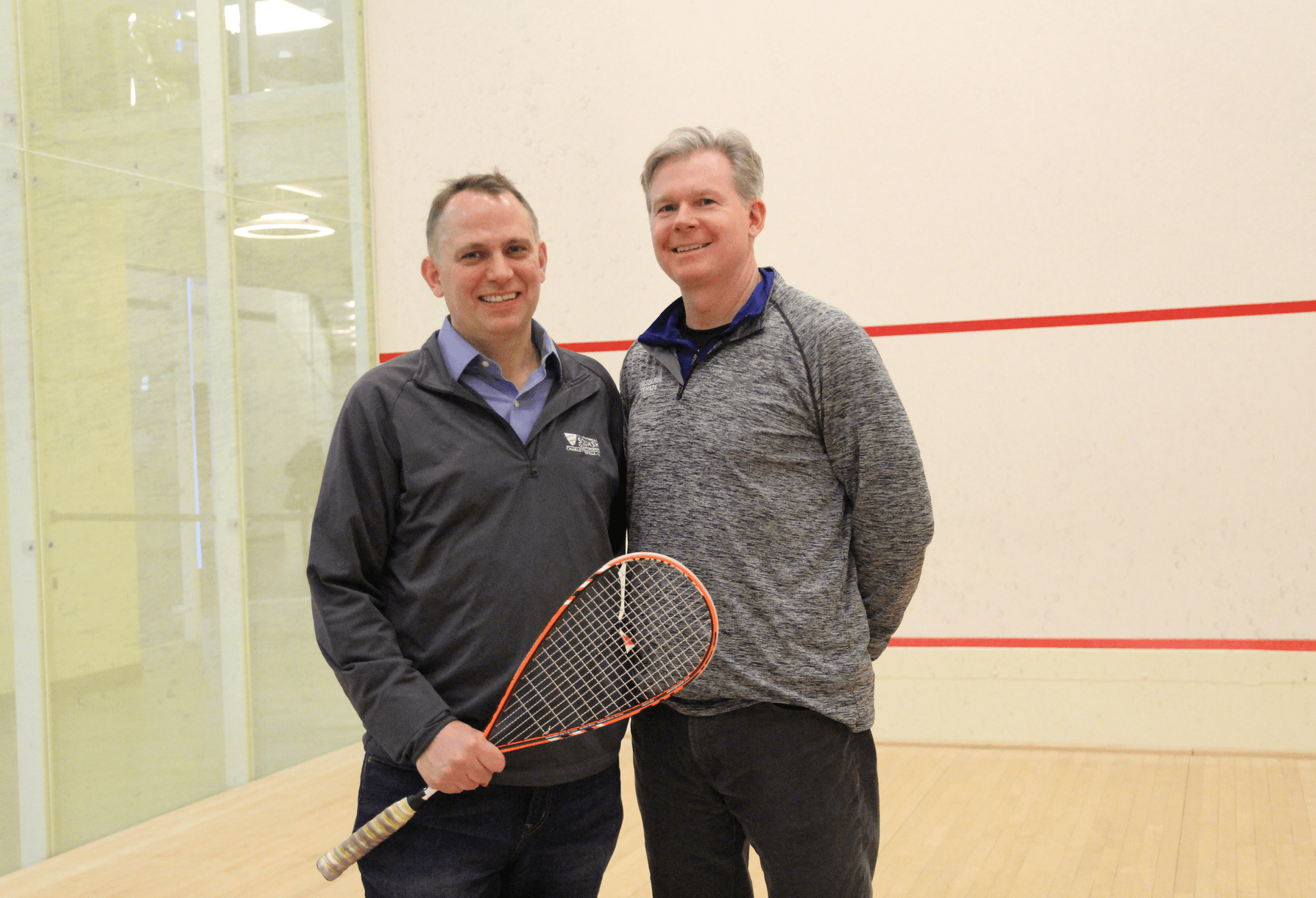 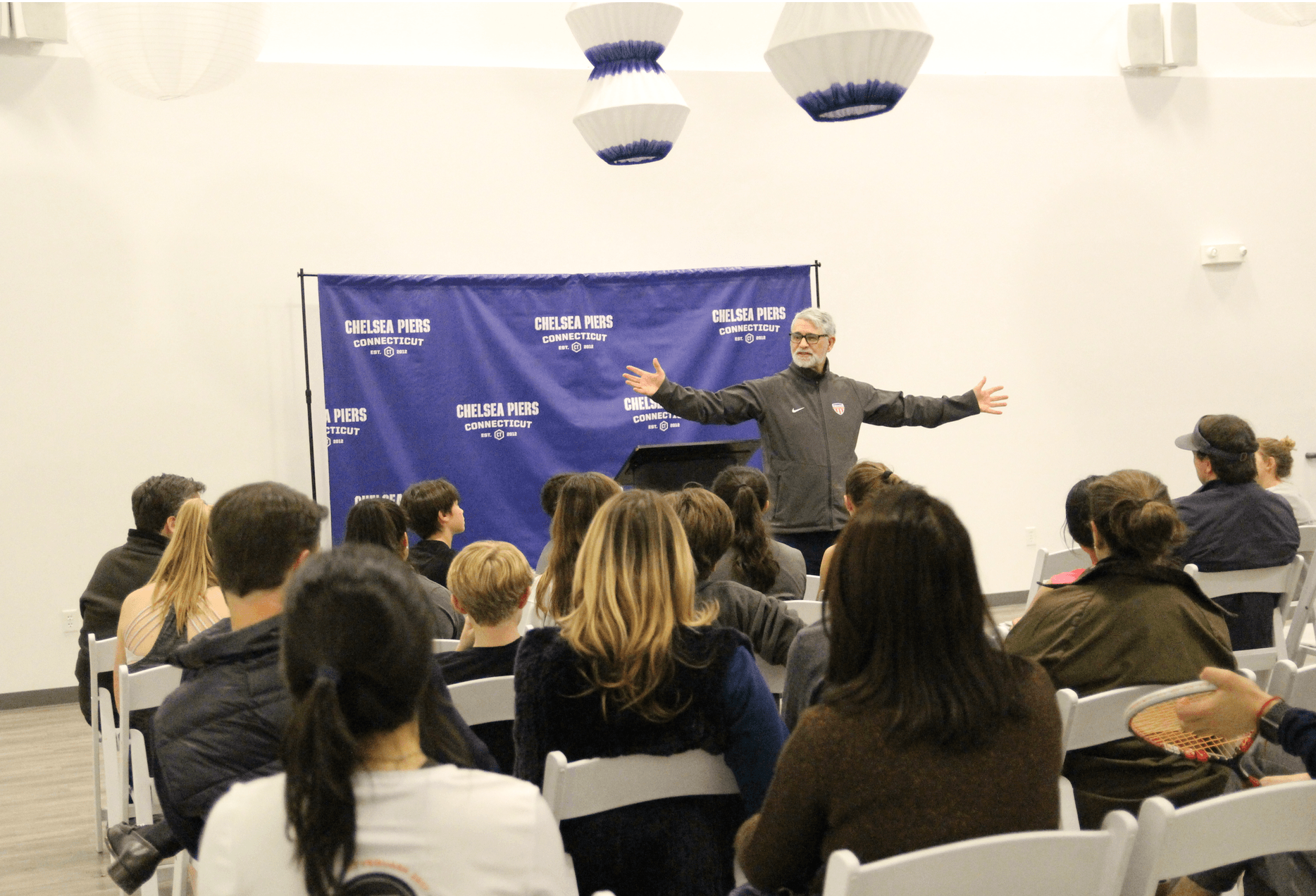 Though Assaiante is passionate about Squash and brims with enthusiasm about the game, he said he does advise young athletes to play multiple sports and suggests cross training in the summer. Toward that end, Chelsea Piers is an ideal destination, with its with unrivaled space and activities.

“I’d like to see them do more than one sport when they’re young,” Assaiante said. “Ideally a team sport and an individual sport.”

Sharing Assaiante’s passion for the sport, Musto said Squash is ideal because it connects players to a community, yet it is not a team sport. “When I go to a tournament in Sweden or Prague and I know a third of the community,” he said.

Building on the concept of community, Musto said he is eager to build a self-sustaining Squash community at Chelsea Piers.

He described Squash as a phenomenal workout, likening its calorie burning and cardiovascular benefits to cross country skiing and crew. “It requires stamina and quick intense movement.”

Like Assaiante, Musto agreed Squash is a sport that parents can feel good about their children playing. In the non helmet sport, players’ gear is limited to protective glasses. While Musto is sought out to train players with aspirations to play in elite colleges, he is equally enthusiastic to introduce beginners to the sport, and enjoys teaching players of all ages. “Recently, on one day, I taught an 83-year-old and a 7-year-old,” he said.

Describing Squash as a game people play for life, Musto said when he traveled internationally for a former job with American Express, it was easy to wander into a Squash facility and find someone to play with. “It’s a great game for business, and it’s a lot less time consuming than golf,” he said.

“We have the best commercial club facility in North America,” said Bill Mountford, the Director of Racquets at Chelsea Piers. “And this is the greatest Squash pro in the area.”

Musto comes to Chelsea Piers most recently from the Princeton Club in New York City where he served as Director of Athletics and Head Squash Professional for more than five years.

He was a former Captain of the Yale Squash team, and a four-time 1st team All-American playing  #1 for the two-time National Champions. He brings more than two decades of both collegiate and professional playing experience, a robust coaching background and strong management skills. 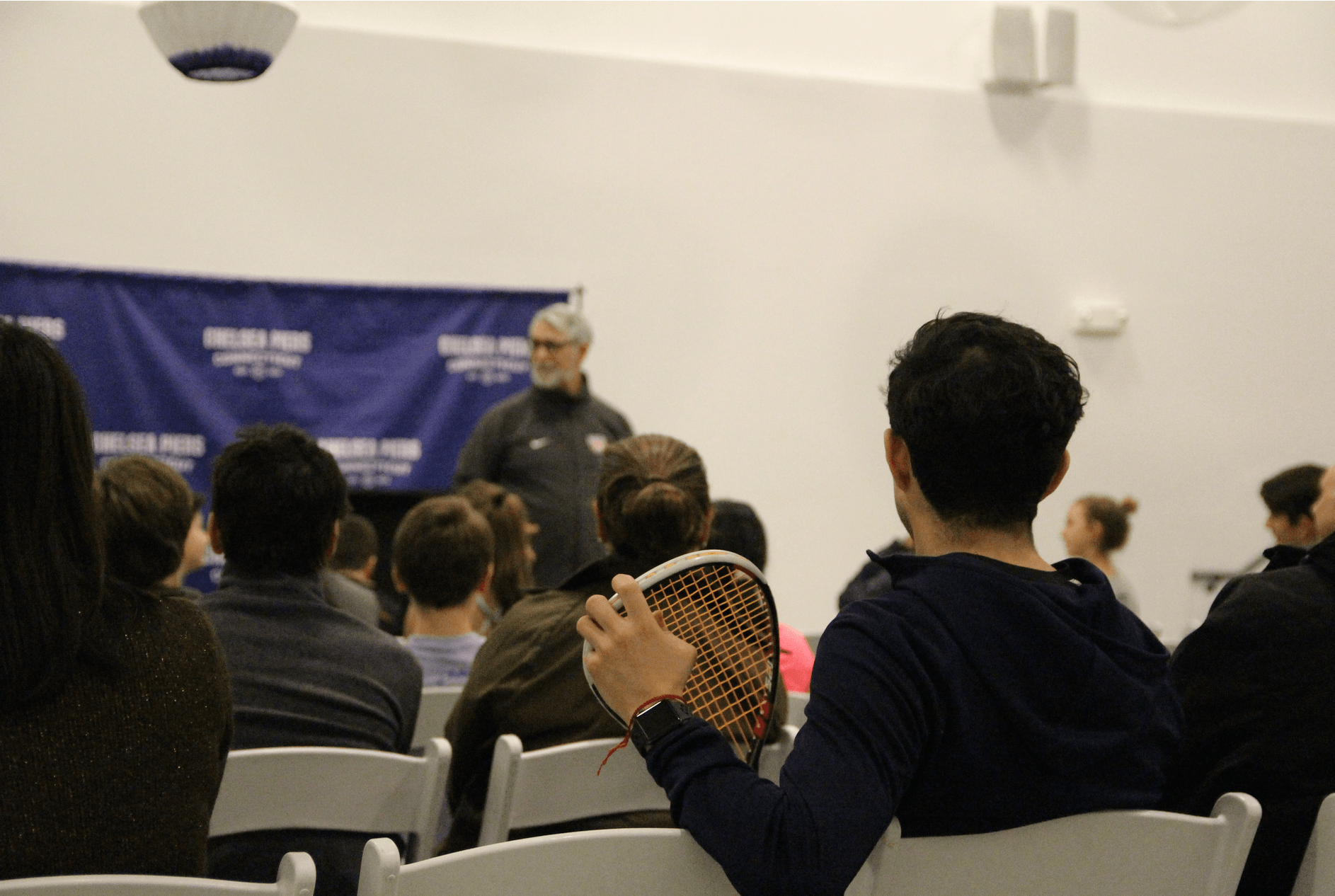 At Chelea Piers Connecticut, Paul Assaiante gave a presentation to about 50 players and their parents on Jan 8, 2018

Musto’s playing career began in high school where he was the top ranked American junior in both the U19 and the U17 divisions.  After his collegiate career, Musto played on the Professional Squash Association Tour (PSA) for four years.  Musto, a Level III US Squash Certified Coach, continues to compete on the International Masters tour where he won the US Men’s 45 & Over National Championship in 2016.  He also served as Chair of the US Squash Competition Task Force that redesigned the US Championships.

“John is a tremendous addition to the Chelsea Piers Squash Club,” said Greta Wagner, Executive Director, Chelsea Piers Connecticut.  “John is known as a versatile and top coach for every level of player.  He has trained top professional players on the PSA tour, mentored aspiring juniors who wish to enroll in exclusive colleges, yet also delights in introducing the sport to beginners and organizing programs for adults of all levels.”

Musto spent 10 years on the Yale Club of New York Board of Directors, the last three serving as President of the Board.  In addition, Musto has valuable experience at the high school level, having spent two years as the head Coach for Chapin School Varsity Girls Team.