We have an alarming problem in our communities and schools that has spiraled out of control among people of all ages. Across the nation, the misuse of prescription medication has become the number one cause of death from drug overdose, with two people dying every day from opioid overdose in Connecticut.  In Stamford alone, at least twelve people have died of drug overdoses since January. “I can’t tell you how many families I speak to that have children who have become addicted to these substances and virtually anything valuable in their household has been taken,” says Captain Richard Conklin, who oversees Stamford’s Police Department Narcotics and Organized Crime squad.

That’s why the Opioid Prevention Committee formed by Communities 4 Action has joined forces with local leaders and other community representatives to implement an awareness campaign that includes a slogan contest at NoRxAbuse.com.

“It may take just minutes for a student to come up with a slogan and submit their entry online, but through the process we are hoping they and their parents become more aware of the prescription drug abuse epidemic,” said Ingrid Gillespie, executive director of Communities 4 Action.

Parents and teens are often unaware of the fatal dangers of prescription drug abuse since they think that if the “meds” are prescribed by a doctor, they must be safe. That could not be further from the truth. Eight out of ten people who abuse prescription painkillers become addicted to heroin. Preventing prescription drug abuse is a staggering dilemma since half of prescription med abusers obtain the drugs for free from friends or family. Fifty-two million Americans over the age of twelve have taken prescription meds for non-medical purposes in their lifetime. The bottom line is that any time a person uses a drug not prescribed to them, this IS drug abuse.

Through the NoRxAbuse.com slogan contest, students can learn the facts, help spread information to friends and family, and have an opportunity to make a difference while learning valuable marketing skills. The slogan contest is open to middle and high school students fro​​m New Canaan, Stamford, Darien, and Greenwich. The contest rules, slogan-writing tips, facts, videos, resources, and the online entry form are available at NoRxAbuse.com. The slogan winner will receive prizes valued at $250 and two honorable mention will receive prizes valued at $100 each. The winning slogan will be chosen based on originality by judges from the Communities4Action committee.

All entries must be received online by the deadline of January 8, 2017, electronically postmarked by 4:30 pm.

First place and two honorable mention winners will be notified by January 13, 2017, and must be present at the awards ceremony to be held at the Darien Library on the evening of January 19, 2017, during a Darien Health Dept presentation featuring author/actor Malcolm Spears, a Stamford native who penned the memoir “Biggie’s Chronicles,” about his drug-abuse journey to sobriety. 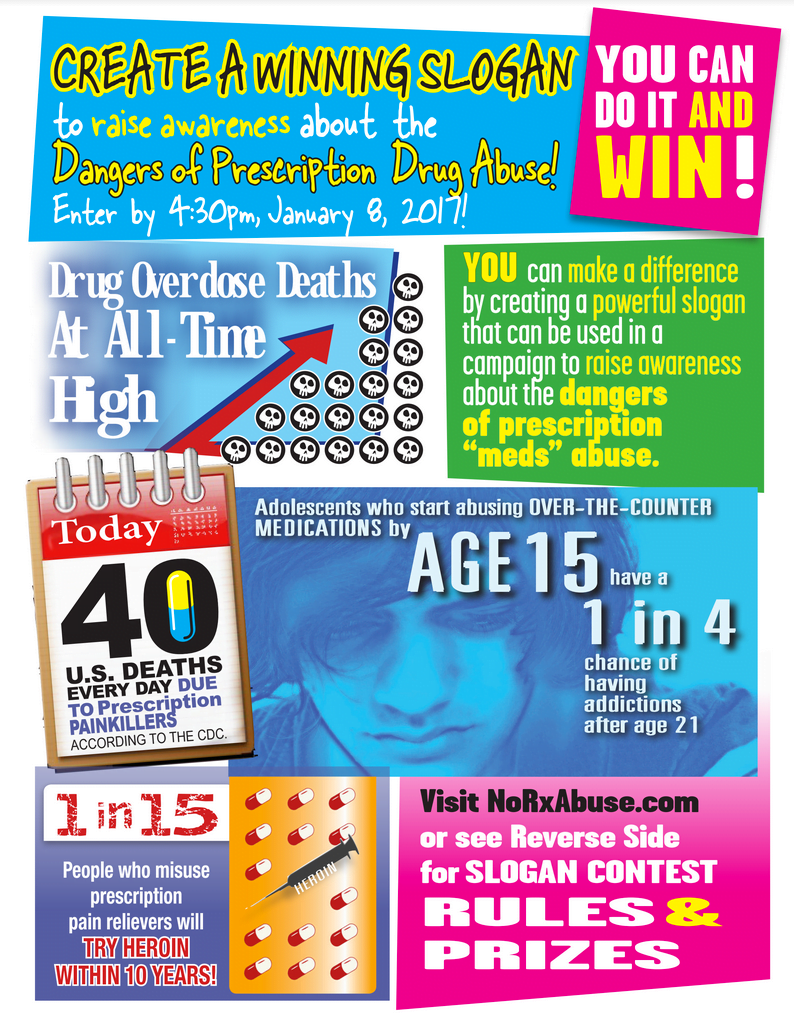