Congressman Jim Himes, Democrat, representing Connecticut’s 4th District, held an almost two-hour-long town hall meeting with his constituents on Saturday afternoon to discuss his work and their concerns. The meeting was held at UConn Stamford to a capacity crowd.

Such meetings, typically scheduled during Congressional recesses and lightly attended, have taken on a new profile since the Trump Administration’s accession, as citizens have re-discovered this mechanism for confronting their leaders face-to-face.

Congressman Himes took questions from a broadly sympathetic audience on a range of topics, from the Environment and the EPA, voter fraud and the Voting Rights Act, President Trump’s request for additional military spending, Health Care, the Earned-Income Tax Credit, School Vouchers, and Immigration, to government funding for research on treatment-resistant bacteria and its support for international student exchanges.

Himes’s rhetoric was middle of the road, trying to find, as he often put it, “the good news and the bad news.” On the one hand, Himes stated that some of Donald Trump’s actions demonstrated authoritarian tendencies. On the other – in response to a shout-down from a Trump supporter in the audience – Himes made clear that he does not believe that the United States is in danger of becoming “Pinochet’s Chile” or “Germany in the 1930s.” 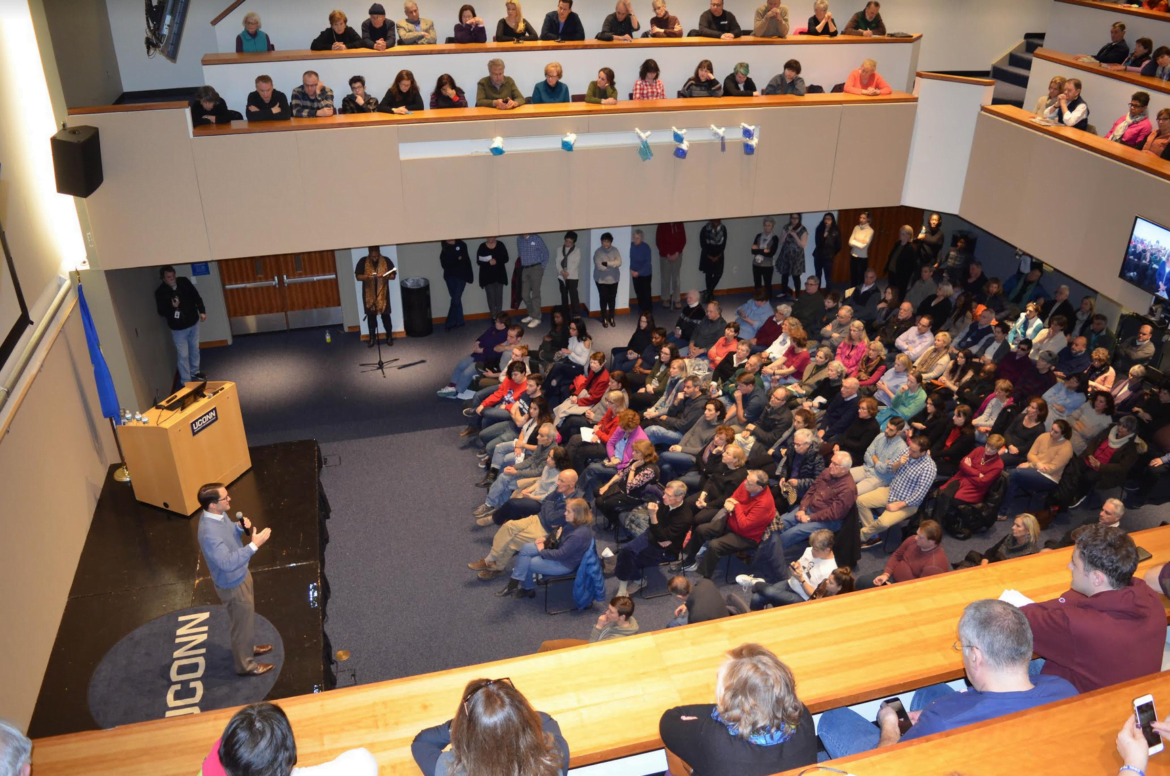 The Gen Re Auditorium was the largest venue the Himes staff could find in Stamford at a reasonable cost and within the legal obligation to pay market prices when renting such facilities. The Himes staff handed out sheets to about 100 overflow attendees, directing them to a secondary facility where CCTV and microphones allowed them to participate from afar. March 4, 2017 Photo: Francois Steichen

“Our institutions are working, and although President Trump groused about the rights of Courts to review his actions, as well as some of the Judges who unanimously rejected his executive order, he did respect their fundamental right of Judicial Review,” Himes said.

His lone caveat was a majority security threat to the United States, “say 20 people dying in Cleveland and another 20 in Los Angeles, and 20 others somewhere else, all on a single day.”

He said such incidents might shock Americans into passing laws “where we say ‘maybe it’s okay to curtail some free speech.’ And that is perhaps the thing that concerns me the most… the thing that might lead to an authoritarian government.”

Himes urged constituents to make their voices heard in both specific and general ways.

Responding to a question about the Voting Rights Act, Himes succinctly related why a reformed Section 4 of the Act was still important, even if the Supreme Court had declared it antiquated.

He urged citizens to contact Congress to pass legislation to reform the Act, as the Supreme Court said it should, but as many Representatives and Senators have balked at doing.

Finally, Himes made a request to constituents: “Usually, it’s all about what I am supposed to do, but now, I am going to ask you to do two things: Get informed. Don’t fall for the easy answer.”

When a politician says ‘we need to eliminate fraud, reduce taxes and stop wasteful spending,’ I hope you recognize that this is not a specific-enough answer,” he said. “Challenge them on that answer.

Secondly, Himes recommended people read what others are saying. “If you are a Liberal, look at Fox News. I read the editorial page of the Journal, and I often don’t like what I read there, but if I don’t do that, then I may miss something important.”

The Gen Re Auditorium was the largest venue the Himes staff could find in Stamford at a reasonable cost and within the legal obligation to pay market prices when renting such facilities. The Himes staff handed out sheets to about 100 overflow attendees, directing them to a secondary facility where CCTV and microphones allowed them to participate from afar. In addition, the meeting was carried live on Facebook. A few late stragglers were initially directed to the secondary location, but about 30 seats were liberated on the top floor of the auditorium  to accommodate them.