On Wednesday night the 14 members of the Eagle Scout Class of 2019 was honored at a special recognition ceremony at Greenwich Country Club. Each boy lead a service project with the help of other scouts with a dizzying amount of volunteer hours.

Charles Achoa, from Troop 9 completed a project to benefit Greenwich High School’s Innovation Lab where two maker space work benches were designed and constructed, and a safety video created for the classroom. The video shows the safe usage of tools including saws, power drills, staplers and electrical equipment. 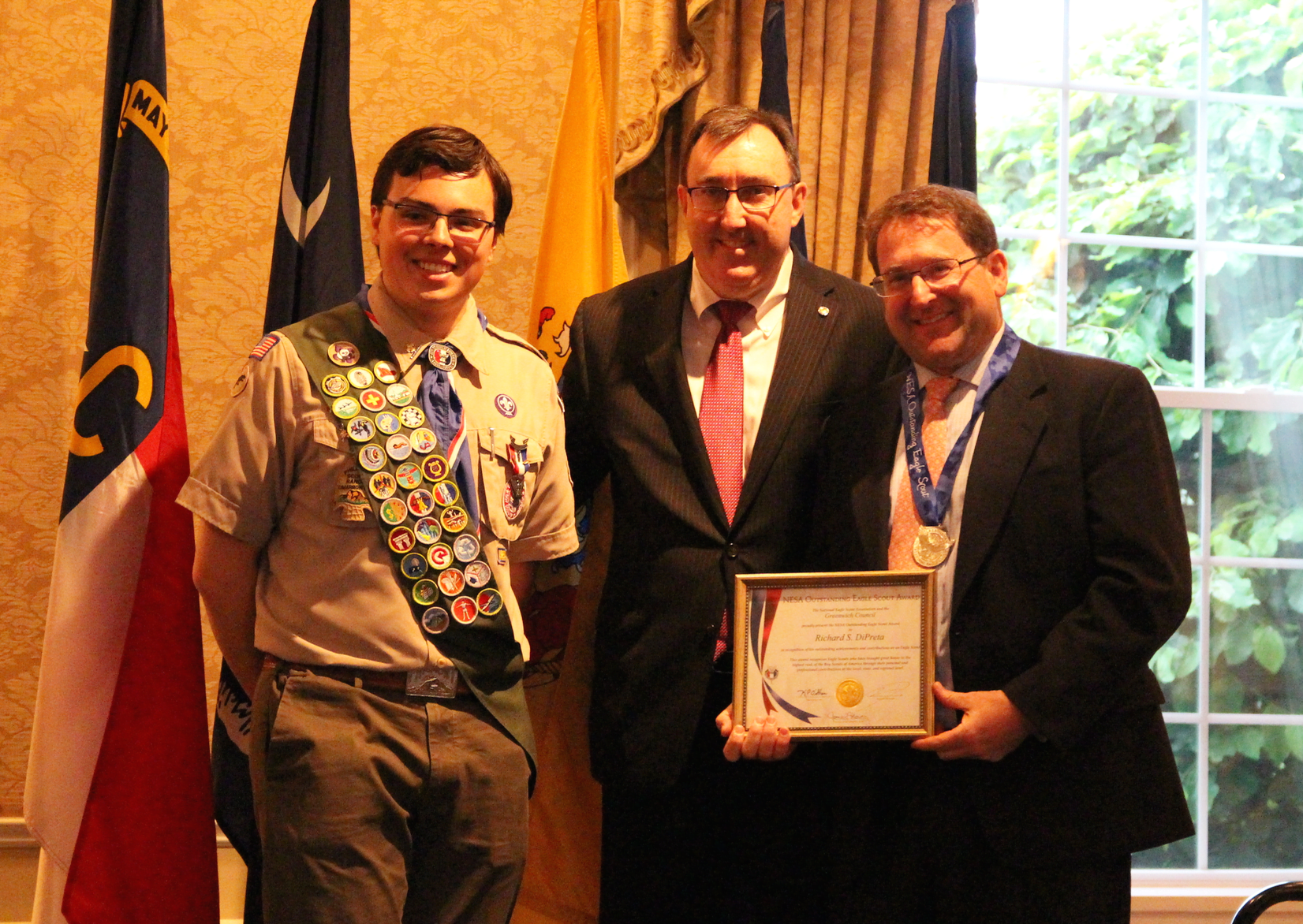 Owen Bianchi of Troop 35 led 28 individuals in a project that took 293 hours. Owen’s project benefited the Fairchild Wildflower Sanctuary of the Greenwich Audubon where two bridges were upgraded and replaced.

Noah Brehm from Troop 35 did a project for the Greenwich Land Trust in which a wooden boardwalk was constructed over a wetland meadow spanning 90 ft which will be used during walking tours. Noah led 35 individuals. The project took 361 hours. 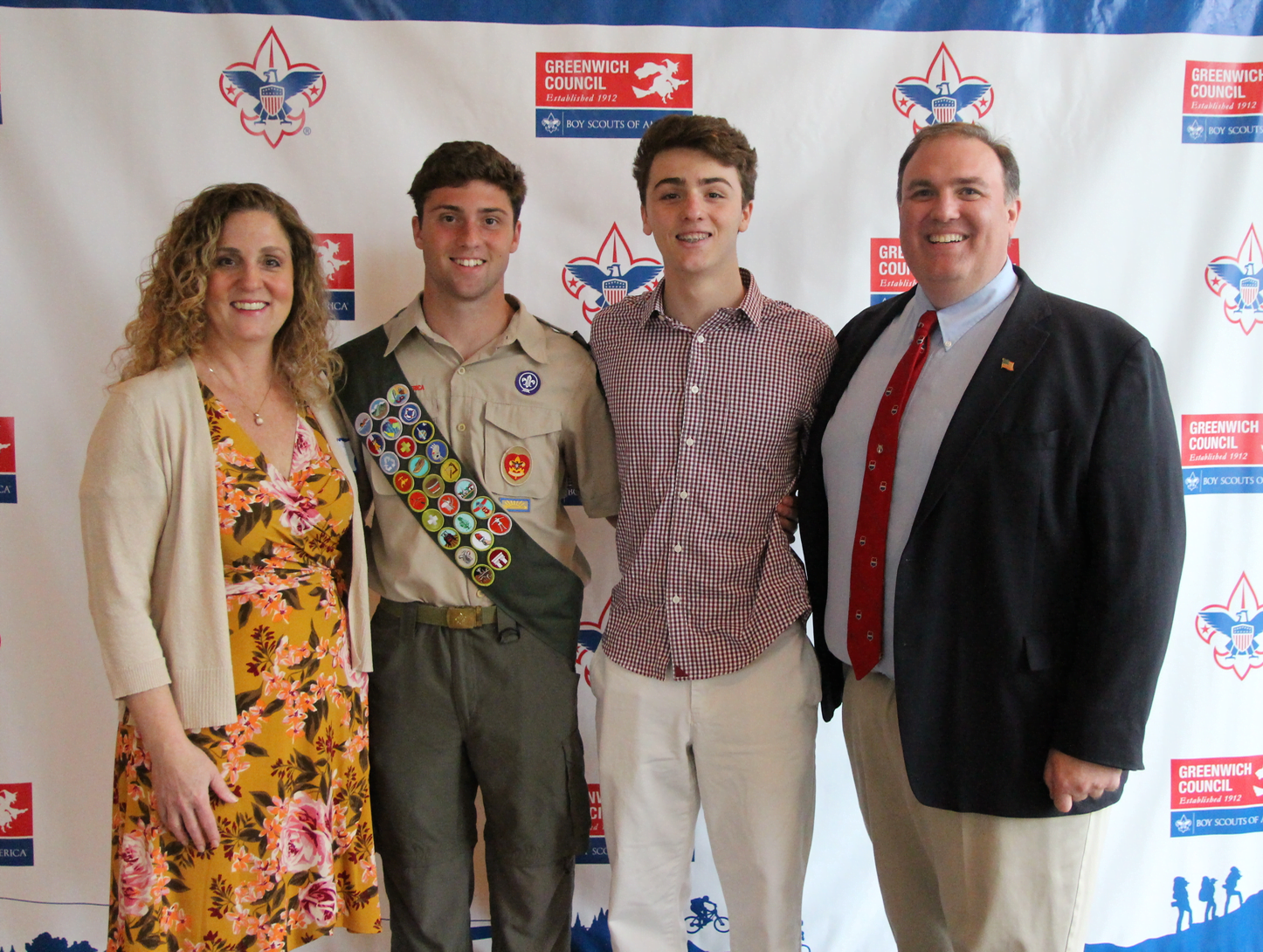 Charles Ducret from Troop 11 led 18 individuals on a project that took 350 hours. At the Caldwell Sanctuary a collapsed bridge was rebuilt including substantial reconstruction of both the bridge and supporting structures. Once constructed, a rock pathway leading to both sides of the bridge was re-established.

Robert Freder from Troop 35 led seven individuals in a project that took 116 hours and benefited the Town’s Bendheim Western Greenwich Civic Center where a wooden kiosk was designed, approved and built outside the facility. The kiosk provides a space to post flyers and calendar events to enhance communications with the community. 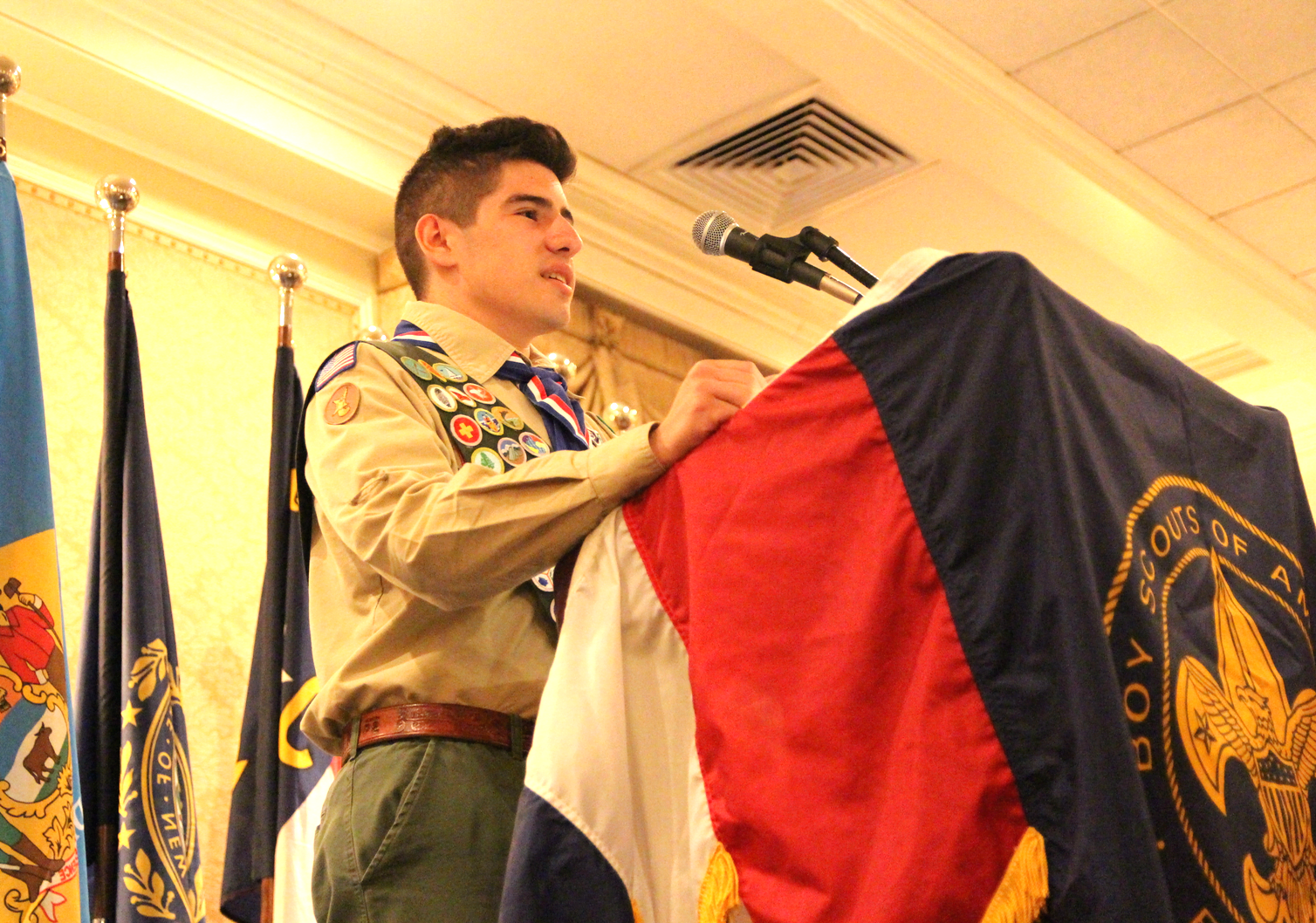 Carlos Maldonado explained his project to the audience at the Eagle Scout Recognition Dinner and Gathering of Eagles at Greenwich Country Club. June 5, 2019 Photo: Leslie Yager

Carlos Maldonado of Troop 35 led seven individuals on a project that took 105 hours at Walker Lake Beach where three new canoe, kayak and boat racks were designed, the site prepared, racks constructed and painted, and the surrounding area landscaped.

Aditya Malhotra from Troop 35 led 17 individuals in a project that took 60 hours at Westmoreland Sanctuary in Mt Kisco, NY where a series of three compost bins were designed and built. Also, informational plaques describing the purpose and process of composting were created to educate the public.

Peter McGuigan from Troop 9 led a project involving 16 individuals and took 117 hours. At Nathaniel Witherell a 6′ x 20′ pollinator garden was designed and installed with self-sustaining perennials to attract butterflies an hummingbirds. Also a memory game was created to explain the various types of plants. 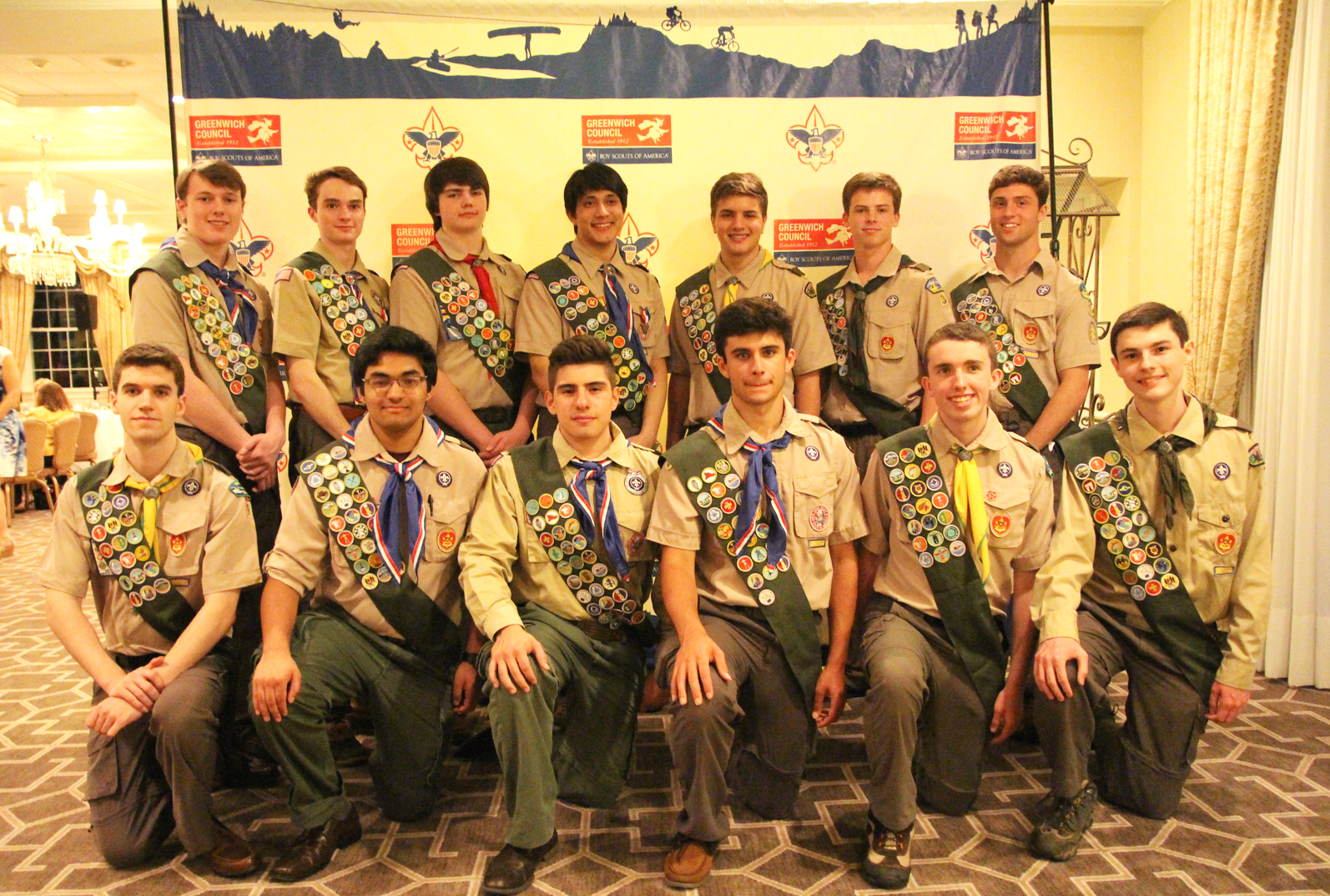 Michael McNulty from Troop 9 led 24 individuals in a project that took 233 hours at Grass Island dog park where the stairs were unsafe for people and their pets. The project replaced and renovated a series of 4′ x 4′ steps and included the installation of a new hand rail.

Liam Patterson from Troop 10 led 11 individuals in a project that took 104 hours. At the cemetery at First Congregational Church the older, unmarked graves had largely been forgotten and obscured with vegetation. A perimeter of short hedges and plants was planted around and in front of the cemetery to highlight and protect it.

Evan Pey from Troop 9 led 22 individuals in a project taking a total of 164 hours at Second Congregational Church where a multi-use storage room was completely renovated which included the demolition, construction and finishing of a new efficient shelving system. 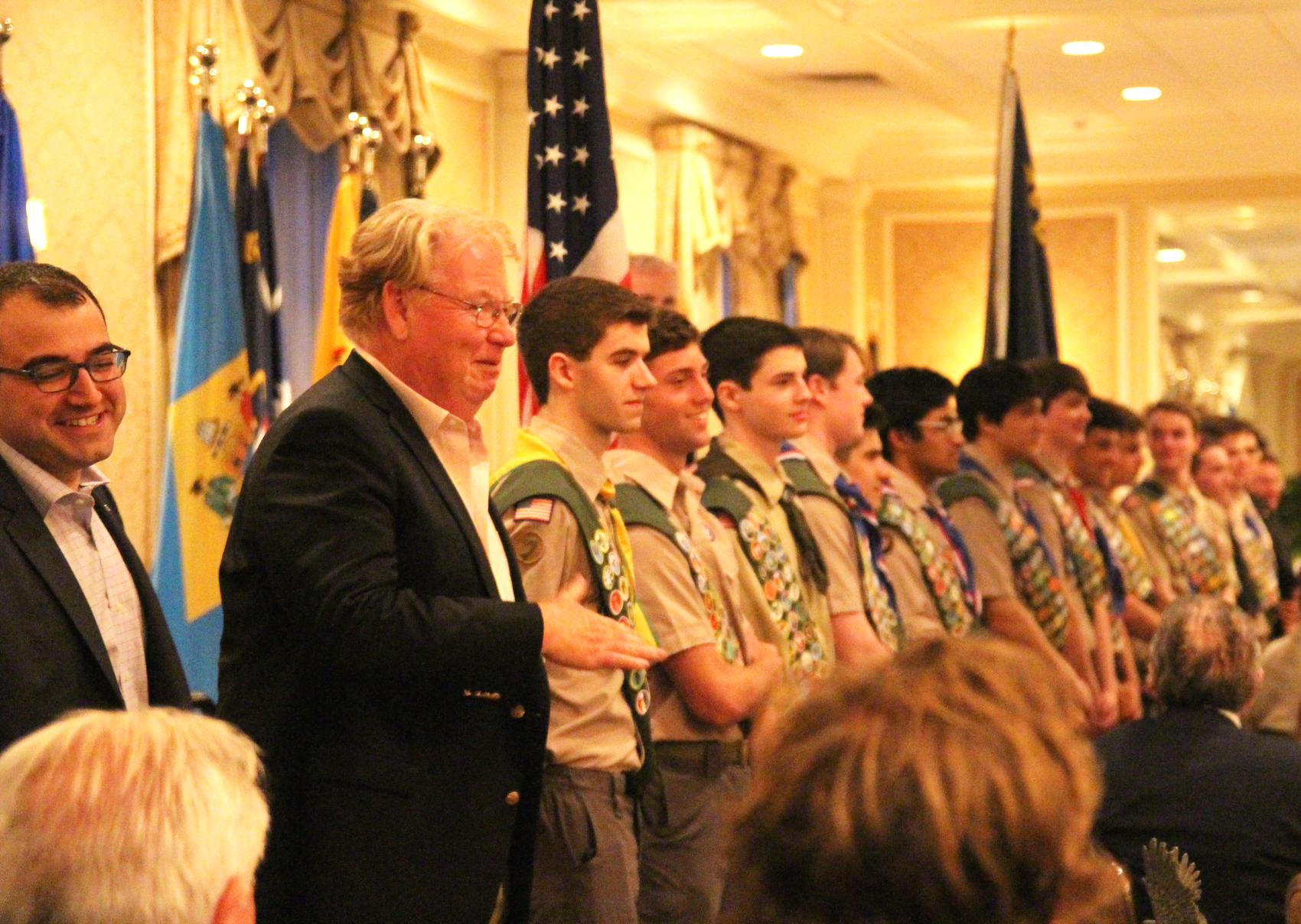 Walter Stratton of Troop 37 led 23 individuals in a project that took 125 hours at Babcock Preserve where the existing system of trails on the 300 acres were poorly marked. A trail marking system was recreated and color coded to make it safer for hikers.

Mercer Van Meel of Troop 11 did a project that involved six individuals and benefited Greenwich Audubon where fences were constructed along a handicap accessible path to prevent people from cutting corners and trampling sensitive native plants. Additional native vines and flowers were planted to grow on and around the fencing. The project took 115 hours.

In addition to honoring the new Eagle Scouts, multiple awards were presented including the the 2019 Veteran Awards: 25 years to Michael Aurelia, William Druschell and Richard Rooney. 30 Years to JP Holko, Daniel Pankosky and Barbara O’Toole and 50 years to James Heavey.

The District Award of Merit was presented to Marc Ducret.

The President’s Award was presented to William Druschell.

The Silver beaver Award was presented to Robert Seavey.

The Malcolm Pray Friend of Eagles Award was presented to Lance Tibbetts. 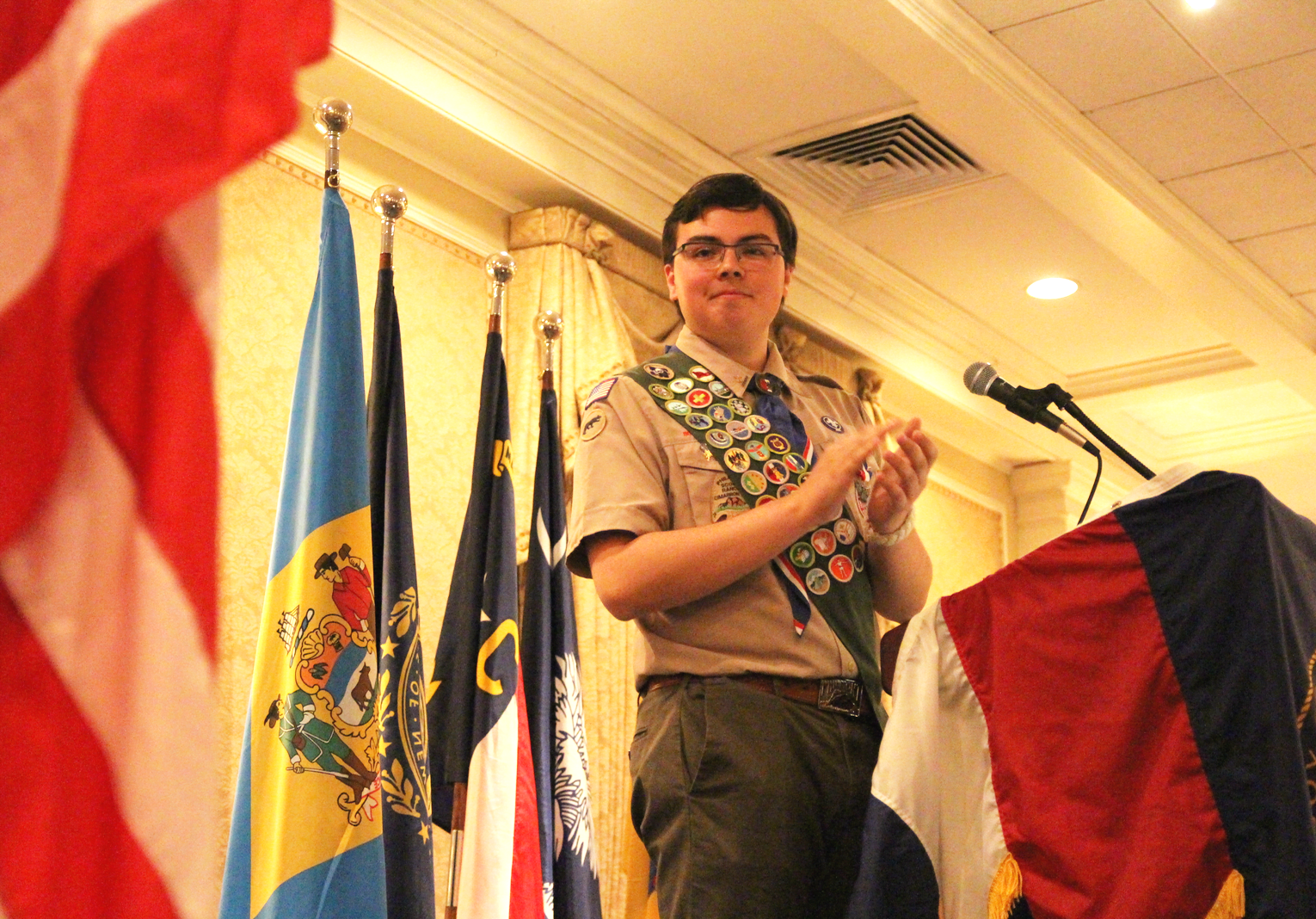