The Republican Town Committee has elected Dan Quigley as their new chair. He succeeds Rich DiPreta.

Interviewed by phone over the weekend, Quigley said given the COVID-19 pandemic, this is no time to be partisan. Still he said there is plenty of work to be done.

Quigley said the election on Wednesday went smoothly with 61 people on a conference call via the Zoom app, which he said was working nicely.

“Everyone on the officer’s committee brings something,” Quigley said. “Marc and Jackie will help me a lot. They have a lot of institutional knowledge. Nisha Arora ran her husband Harry Arora’s successful campaign for State Rep and serves on many boards and committees in town. Fred DeCaro is secretary. He and Marc Ducret are both technologically proficient.”

Many recall that Quigley, who serves on the RTM in District 1, sought his party’s nomination for Selectman last fall, but wound up becoming Lauren Rabin’s campaign manager. 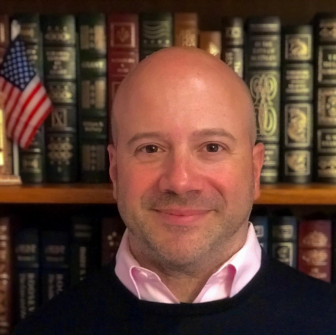 Affable and gregarious, Quigley lives in central Greenwich with his wife Antoinette, who is doing her finance job remotely, and son Max, a kindergartner at Julian Curtiss School who is adapting to distance learning.

He said when he heard Rich DiPreta was stepping down as RTC chair, he decided “to throw my hat in the ring.” Quigley said he and Frank Salamone, the District 1 leader, were the two candidates for chair. The treasurer and secretary positions were unopposed.

“He (Salamone) was the first call I made, but I didn’t know he was running too. We made our decisions on our own – and we talked a lot during our campaigns,” he said.

“RTC is not a policy making body,” he continued. “Our job is to focus on finding and nominating candidates who will win elections for the party. That’s the number one job we have.”

“We don’t want to politicize the virus. We are careful not to. We want to keep politics away from people’s to-do list now. It’s early in the season. Hopefully this crisis will be over so we can do campaigns, and go door to door. If not, we’ll readjust.” – RTC Chair Dan Quigley

Still, he said, “We have to have respect for people. They aren’t focused on November, but on their day-to-day situations. We’re all facing something new and different – whether it’s at home with kids distance learning, or college students doing work from home. Hitting people over the head with political strategies is not the right approach.”

“Our priority is to get through this difficult time and work within the RTC apparatus to nominate high quality candidates for November,” he said.

Quigley said he will focus on finding candidates with the broadest appeal in Town. “We want candidates who will carry forward core Republican values: limited government, lower taxes and responsible fiscal management.”

“We also want to bring more technology to the picture, broaden the party’s base and reach out to younger people and Independents,” he said. “If we can’t get them to join, we want them at least to listen to our message.”

Quigley said that in a different time, he would likely be reaching out to private schools and Greenwich High School to get young people involved.

“It’s difficult today because we can’t meet with people, but we want our message to be something that Independents and even some Democrats will listen to,” he added.

Quigley said Democrats have not been good stewards of tax payer dollars in Hartford and residents have been working harder than ever to make ends meet.

“We want to be the voice of the Greenwich voter in Hartford, since Greenwich has an outside impact on the state’s budget,” he said. “We want to make sure Hartford hears the message from Greenwich.”

Fazio, a member of the GHS class of 2008, who attended Northwestern and works in commodities markets specializing in renewable energy, announced his candidacy on March 18.

“Ryan is 30. He represents a younger voice in the Republican party,” Quigley said.  “He got involved at a high level last November. He has a fresh perspective as a candidate.”

Livvy Floren plans to run for an 11th term as State Rep in the 149th District of Stamford and Greenwich.

“We’ll be looking for someone to run in Steve Meskers’ district,” he said.

“It’s early in the process. We hope to have candidates ready some time in June or July,” Quigley said. “We’re not recruiting right now, but looking to see who is interested in running.”

Quigley said his hope is that both Independents and Democrats who might vote for Democrats nationally will consider voting for Republicans locally.

“That they see Republican candidates as smart and tuned into their concerns,” he said.

As for his family’s experience hunkering down, Quigley said, “It’s going as well as can be expected. I am now Max’s teacher. He will either end the morning saying, ‘Great job,’ or ‘You’re a terrible teacher.'”

“Everybody has to pitch in now,” he said. “Look at the World War II generation and what they sacrificed.”