It seems that lately many headlines reflect the loss of Greenwich’s history, one mansion, boat or cottage at a time.

But this week, there was literally tons of good news.

At Wednesday’s Parks & Rec board meeting, Frank DiVincenzo smiled as he gave an update on the fate of the marble columns the Town salvaged from the O’Neil historic outdoor ampitheater at Lia Fail Way in Cos Cob.

Two years ago, DiVincenzo, along with Bea Crumbine and then Parks & Rec chair Nancy Caplan, who has since passed, spearheaded an effort to save the marble monoliths from a grim fate: the gravel pits.

Like the house at 21 Lia Fail Way, which was built in from 1941-44 by Horton O’Neil for his father, and contained several elements salvaged from the original Havemeyer estate, the ampitheater was doomed.

In August 2016, the Lia Fail Way house was sold to Kevin R Green of Jupiter, Florida to Mark and Gwen O’Donnell for $1,366,000. The following spring, when the new owners applied for and received permission to demolish the house, word got out that the ampitheater was part of their demolition plan.

Many people, including Diane Fox of the Greenwich Preservation Network and the Connecticut Trust for Historic Preservation became involved in the effort to save as much as possible of the ampitheater.

The ampitheater’s columns, which are 2 feet by 3 feet by 9 feet and each weigh five tons, were offered but had to be moved quickly due to the owner’s timetable.

Just in time, permission was obtained, and in May, Anthony Vitti picked them up by crane, loaded them onto a flatbed and moved them, one at a time, to the DPW shed by exit 4 for storage, while funds were raised, designs conceived, and arrangements made to display them somewhere on Town property. 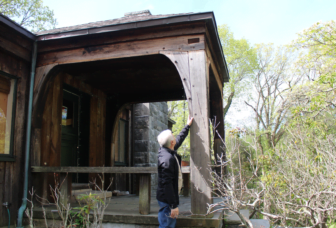 According to the CT Historical Commission the O’Neil house at 21 Lia Fail Way was built mostly with recycled materials. New owners demolished the house to make way for a new, 6,500 sq ft home. Horton O’Neil had built the house for his father using recycled barn wood and beams from the the Shingle-style mansion of sugar magnate Henry O. Havemeyer, located a mile to the east in Old Greenwich. The Havemeyer estate was also the source of a Dutch door at the front entrance and chamfered beams in the living room. The front porch was constructed from salvaged portions of the tack room of the Havemeyer carriage house. Horton O’Neil also salvaged Ashlar granite from the foundation and chimneys of a demolished mansion in Rye NY. The exterior’s vertical boards came from a tobacco barn in the Connecticut River Valley. May 2017. Photo: Leslie Yager

Parks & Rec’s DiVincenzo and Mrs. Crumbine watched as the six  5-ton monoliths were removed from storage and delivered to the Pinetum.

At Wednesday’s Parks & Rec meeting, DiVincenzo said the footings were poured in early November, and it took three to four weeks for the concrete to cure.

He said Anthony Vitti Excavators tried to work around anticipated rain, and thus the date for removal was changed.

“The 60-ton crane that they brought sank into the mud,” DiVincenzo told the Parks & Rec board, adding that to Mr. Vitti’s credit, the next day, a Saturday, he returned with a 100-ton crane.

“It moved it like match sticks,” DiVincenzo said, adding that the monoliths are stabilized by their own weight, which is five tons. 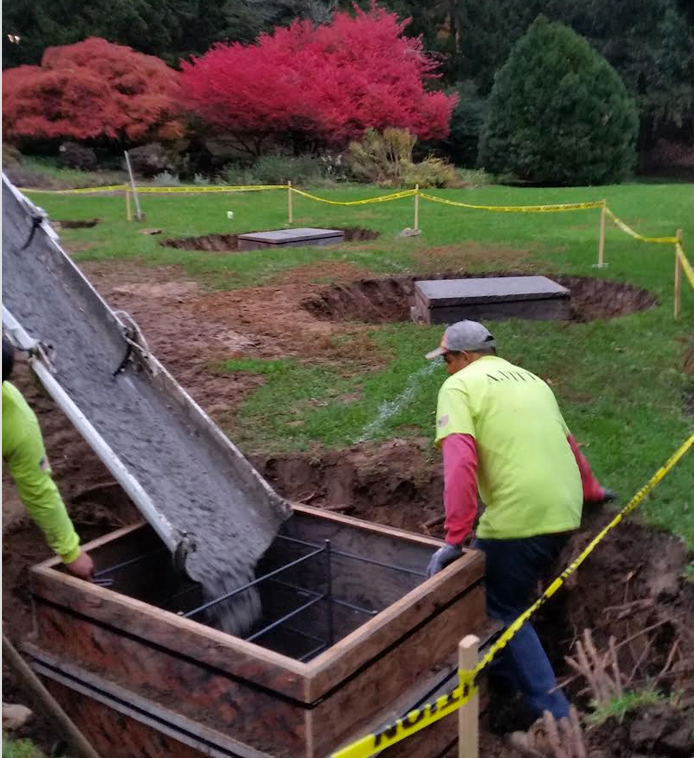 “We have someone willing to pay for stone benches similar to what is there now,” DiVincenzo told the Parks & Rec board.

In an email on Saturday DiVincenzo said the tentative plans are to install an information board by the monoliths, and to either clean or power wash them.

From there he said that in the spring the Town will hopefully regrade, seed, and plant Azaleas.

While it’s sad that the original outdoor ampitheater is no more, it was never open to the public. But now, anyone wishing to view the monoliths will find them in the Montgomery Pinetum close to the corner of Clover and Bible Street. 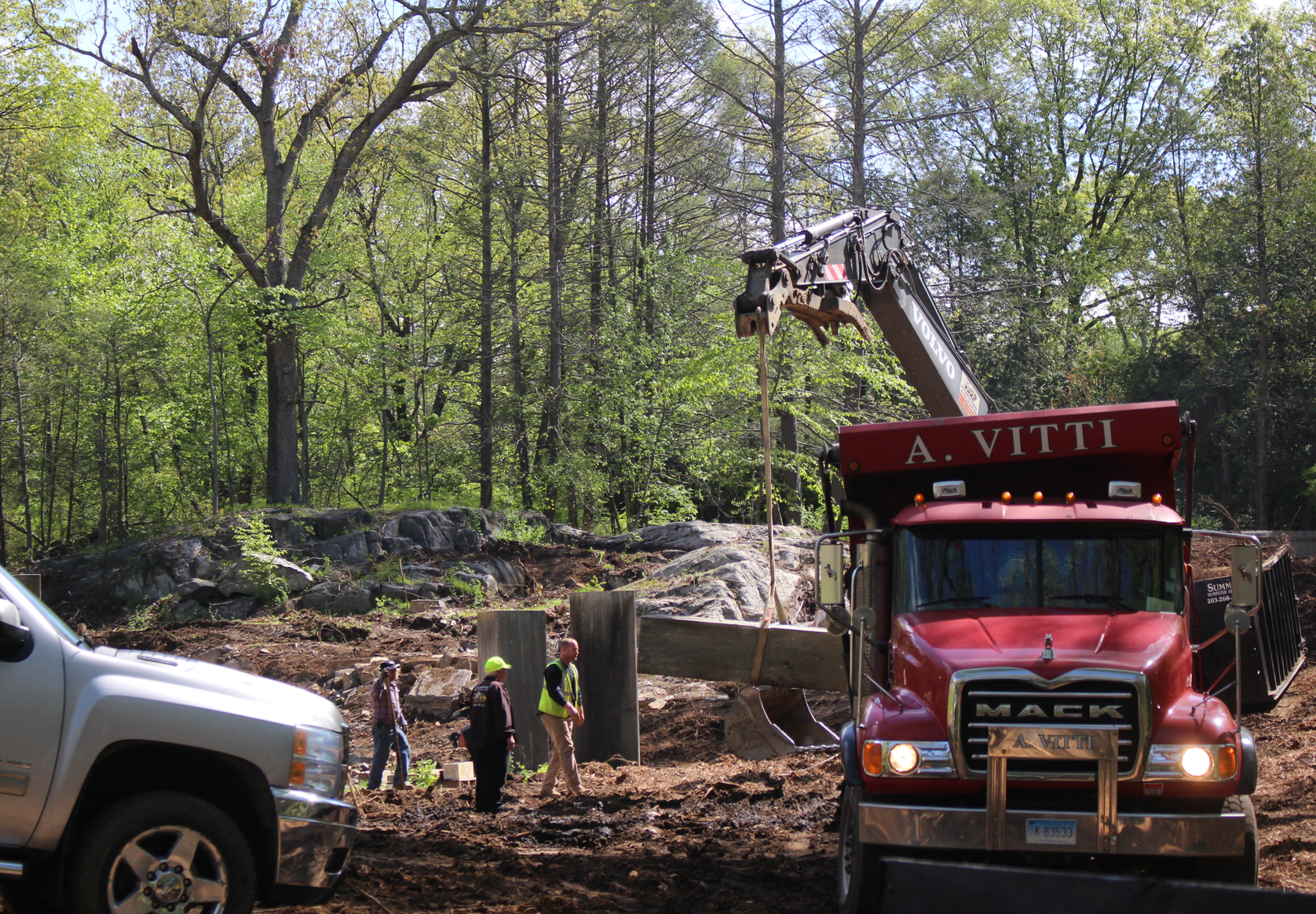 Workers from Anthony Vitti Construction labored to move the first of six massive marble columns onto a trailer at the O’Neil Outdoor Theater at 21 Lia Fail Way on May 9, 2017 Photo: Leslie Yager 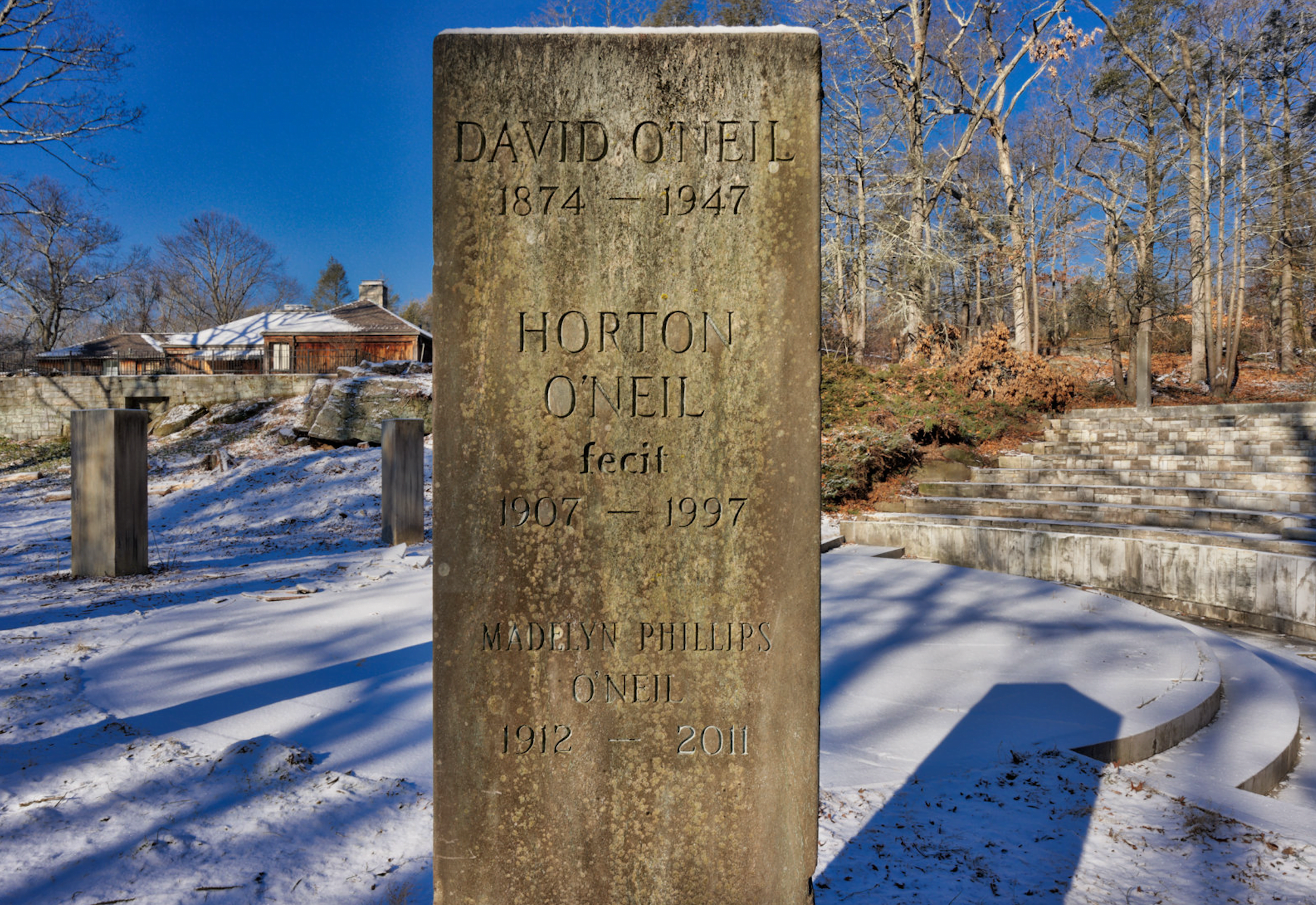 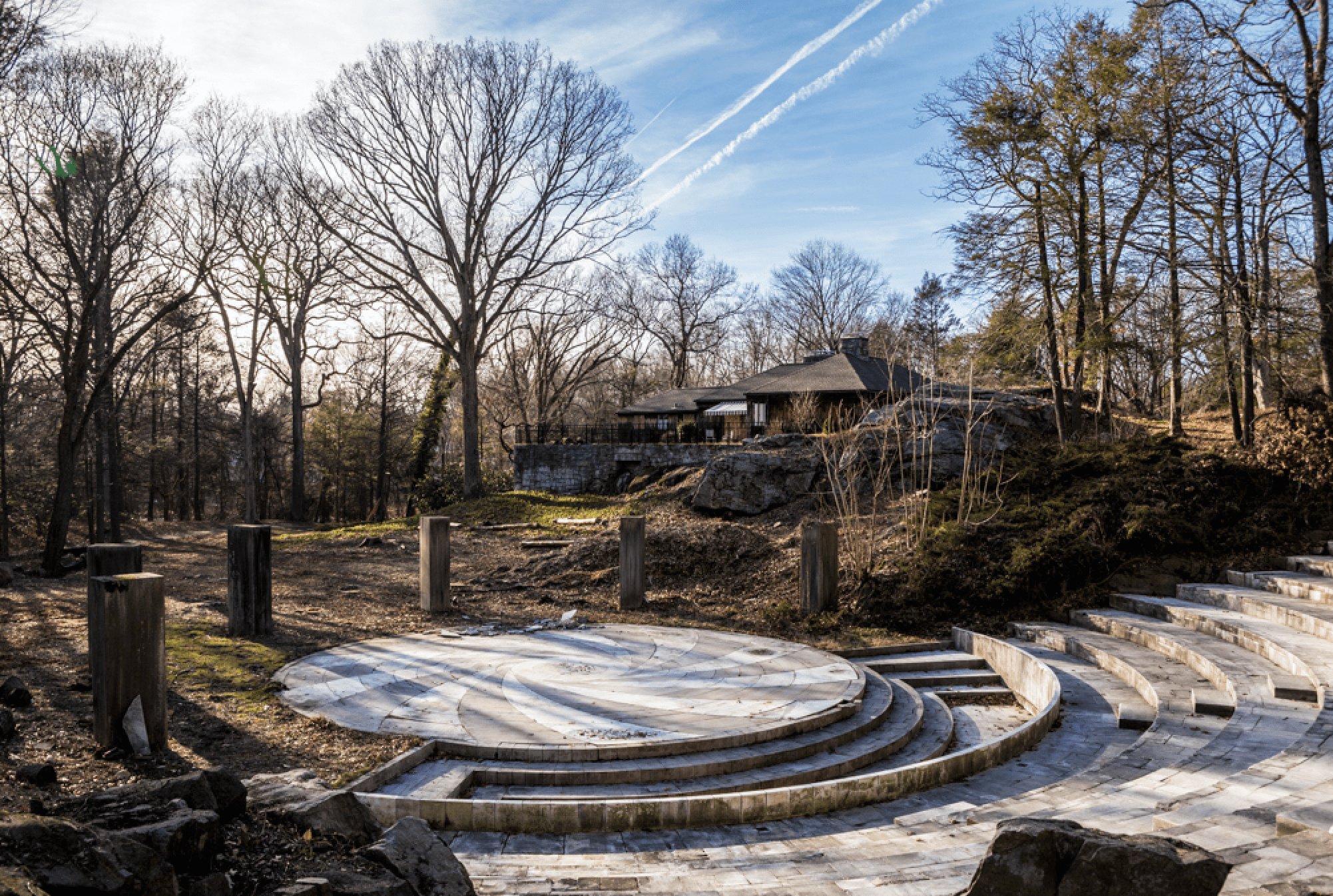 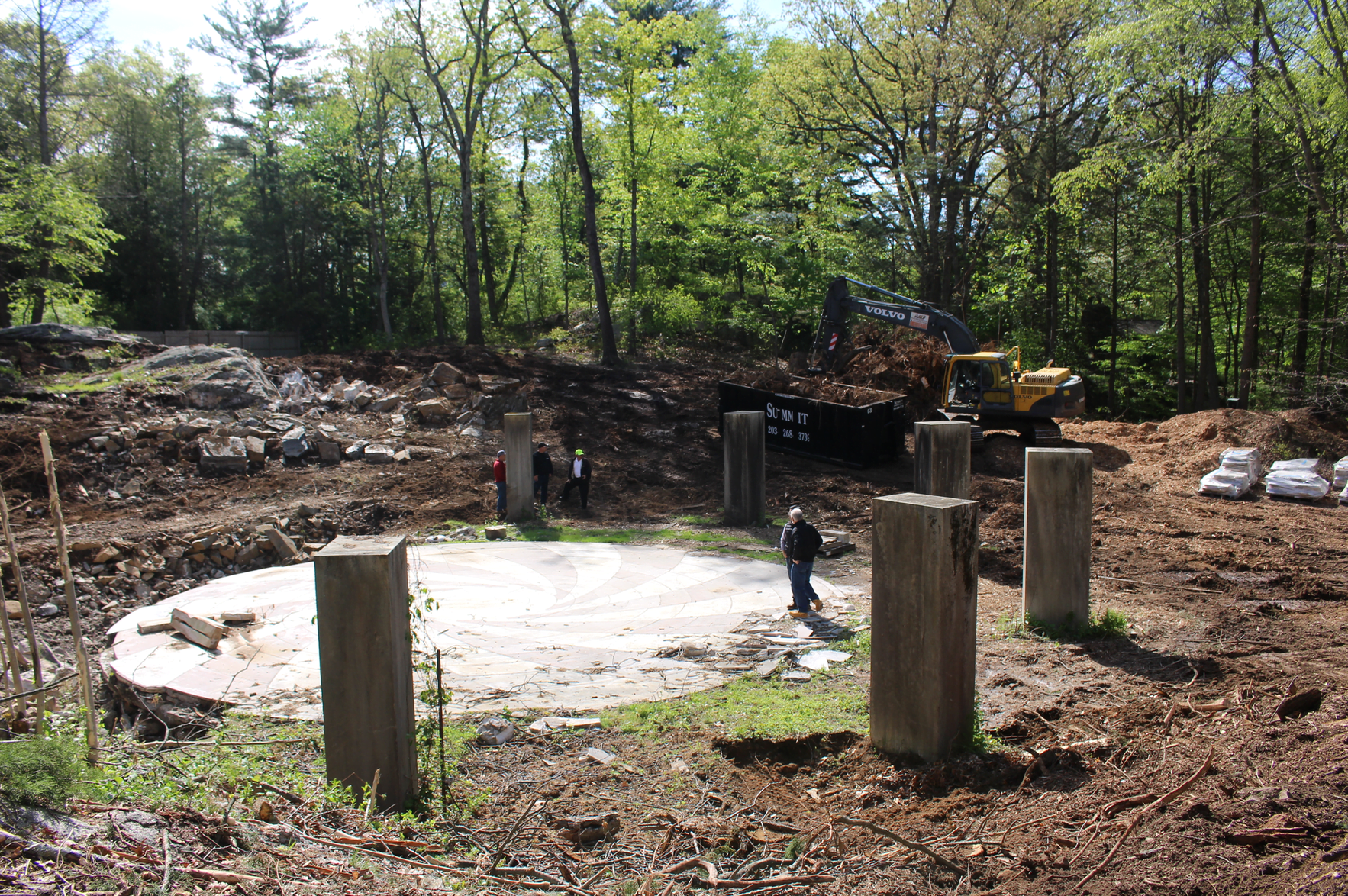