Neighbors turned out in number on Wednesday night for an input session organized by Dept of Public Works and consultants Milone & McBroom. The topic? How best to use the $2 million state grant to improve safety in the Glenville Rd corridor running from the foot of Glen Ridge Rd by Stop & Shop, past the fire house, past the intersection with Pemberwick Rd and Glenville Pizza…and around the corner to Weaver Street. 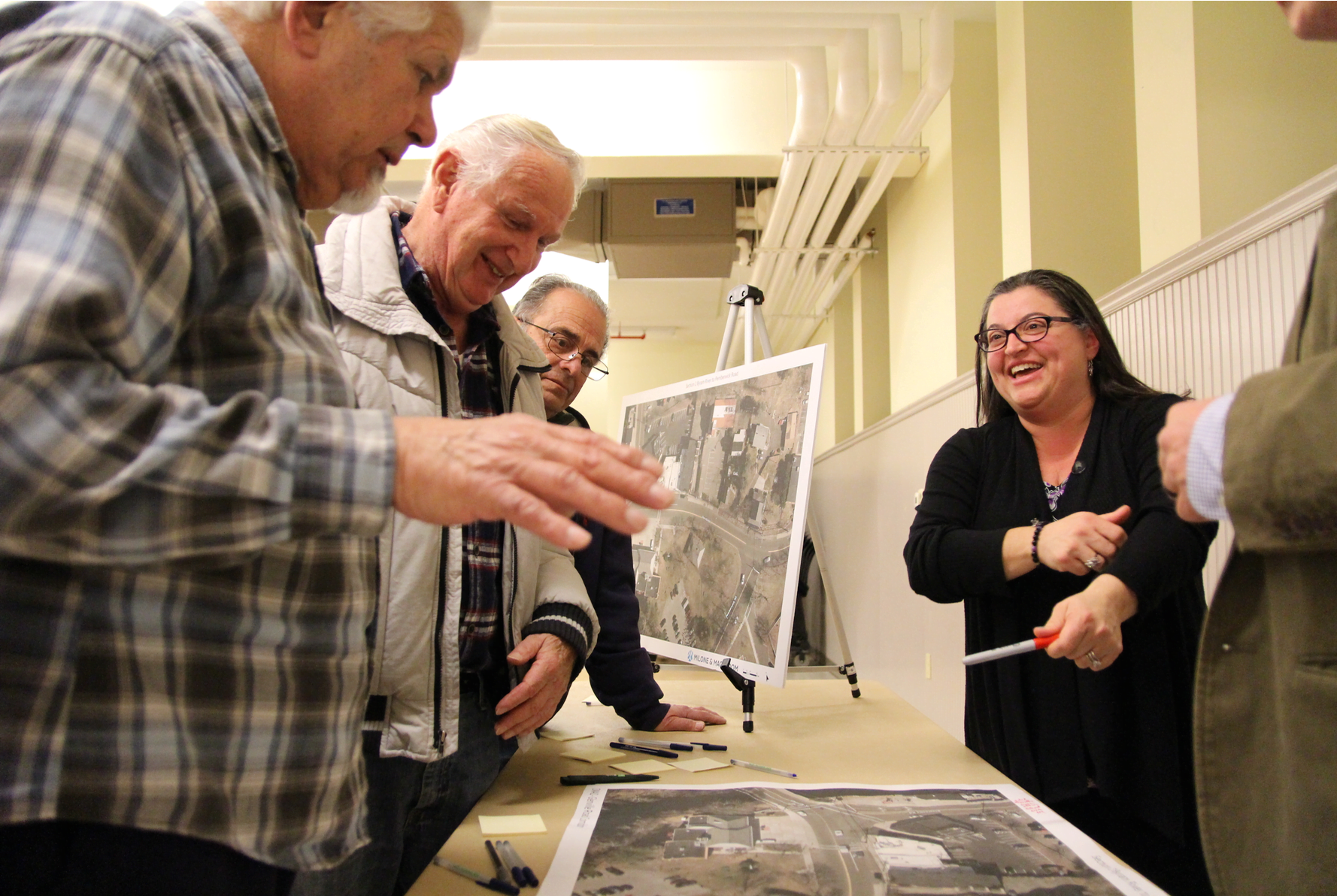 Input was that the intersection with Weaver Street and Glenville Road has improved since a traffic light was added about 15 years ago.

However, feedback was that the light is too short for drivers coming down the hill from Weaver Street. At peak travel times there is typically a queue up the hill on Weaver Street and only four or five cars make it through at a time.

Also, cars back up to the east on Glenville Rd when cars wait to turn left onto Weaver Street.

The most dangerous part of the corridor is the intersection with Pemberwick Rd by Glenville Pizza. The consultants said to put another traffic light there would be too close to the ones at Weaver and Riversville.

But on the topic of traffic lights consultants said the timing of the lights is dated and not optimized. “Now signalization talks to one another,” said Milone and McBroom’s Jason Williams adding that current smart technologies modify the timing depending on traffic. “With smart technology, the light realizes when there is a big back up on the hill and talks to all the other lights to let cars through.”

During the walk through and during the evening input session, residents warned the existing conditions will potentially worsen as several projects come to fruition: Nearby residential development at intersection of Comly Ave and Pemberwick Rd, a project at The Mill on both sides of the river swapping office space for residential (36 units on one side and 33 on the other), and, at the end of Weaver Street, developments at 500/600 and 581/585 West Putnam Ave (total of 100 units).

Resident after resident said they were frustrated by the volume of traffic passing through the Glenville Road corridor. Traffic includes parents driving children to Glenville School as well as to Brunswick and Sacred Heart Greenwich on King Street, to and from Westchester Airport and commuters coming from Rte 684. The corridor is also traveled by people to and from Greenwich Hospital and to downtown Greenwich.

Deputy DPW Commissioner Jim Michel said the number of vehicles passing through the corridor on a daily basis is about 15,000.

Residents on the Greenwich side of King Street (near the top of Glenville Street) said King Street funnels so much traffic in and out of Glenville that it has become treacherous to even back out of their driveway, and that the light is timed to benefit Blind Brook High School.

Melissa Evans, the Town’s Traffic Operations Coordinator, said that light is under the purview of New York, and the grant is specific to the specific corridor.

As for the Glenville Rd corridor, Evans said, “We want it user friendly for cars and pedestrians.”

Glenville resident Anthony Pratico said said existing conditions, congested and dangerous as they are, could worsen.

Pratico predicted drivers will hop off both the Merritt Parkway and I-95 if tolls are installed in Connecticut.

“Everyone is going to skip them including me,” Pratico said. “I’m not going to pay a toll just go get up town.”

Diane Roth, a commercial realtor for Allied who has placed businesses at many locations in Glenville’s LBR-2 zone, said walkability should be a key goal.

“What we like to see is more of a community where people could walk to us. We want people to drive through safely, but we want good sidewalks and crosswalks, to make families stay,” Roth said. “It doesn’t feel like a community now. It feels disconnected.”

“If it’s not safe, the moms have to drive from the Civic Center to Vinny’s (Glenville Pizza),” Roth added.

Over and over, residents said pedestrians – including scores of children who play sports in the field at Western Greenwich Civic Center – take a risk darting across Glenville Road to Glenville Pizza.

The pizza parlor, located at 243 Glenville Rd is not only situated on a sharp curve, but its patrons park on the sloping shoulder in a haphazard fashion. Sometimes cars hang out into the roadway. Sometimes they park parallel, sometimes they even park perpendicular. 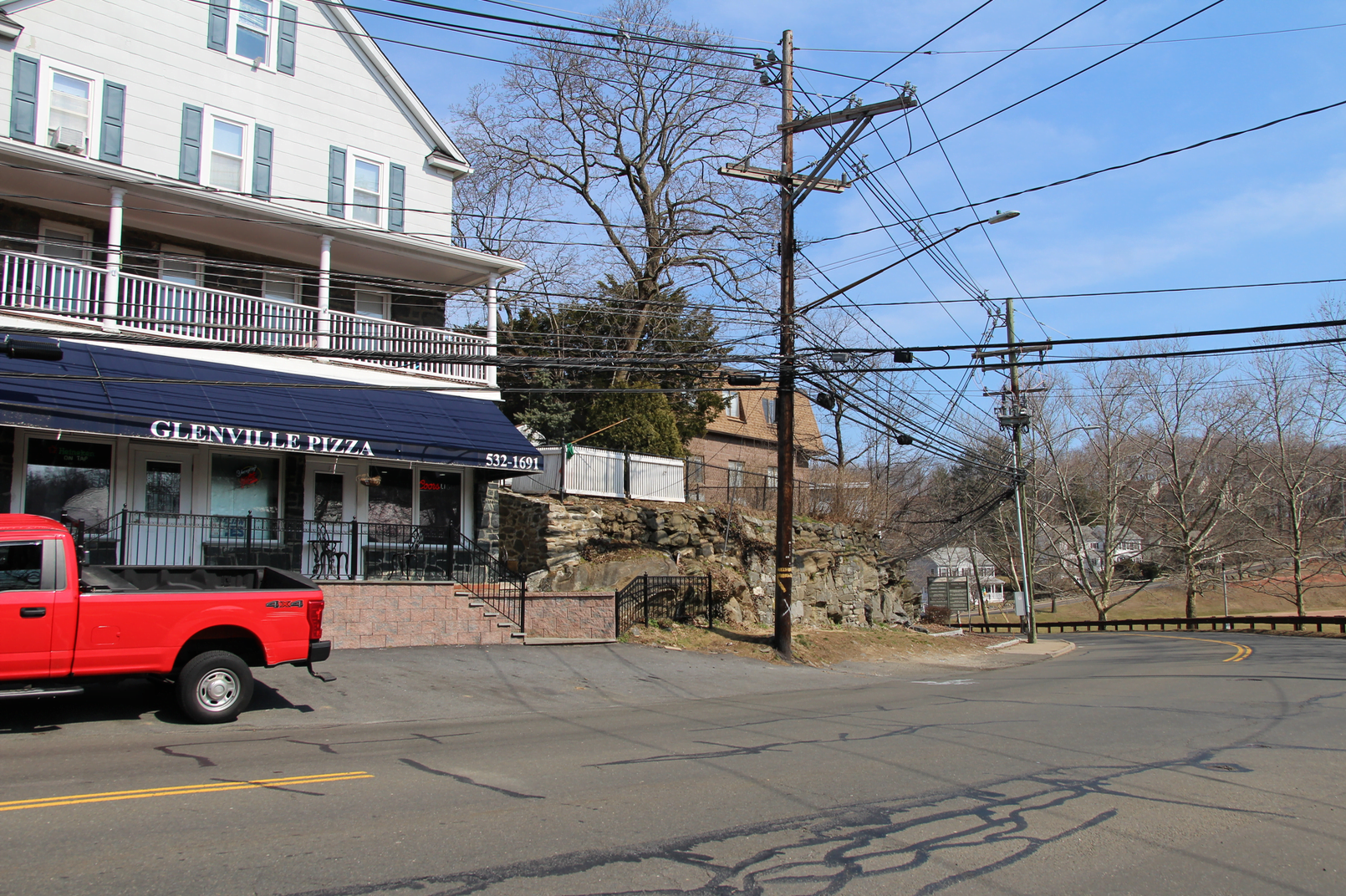 Glenville Pizza has been popular for decades but it has no sidewalk out front, is on a sharp corner and customers park on the shoulder of Glenville Rd. March 20, 2019 Photo: Leslie Yager 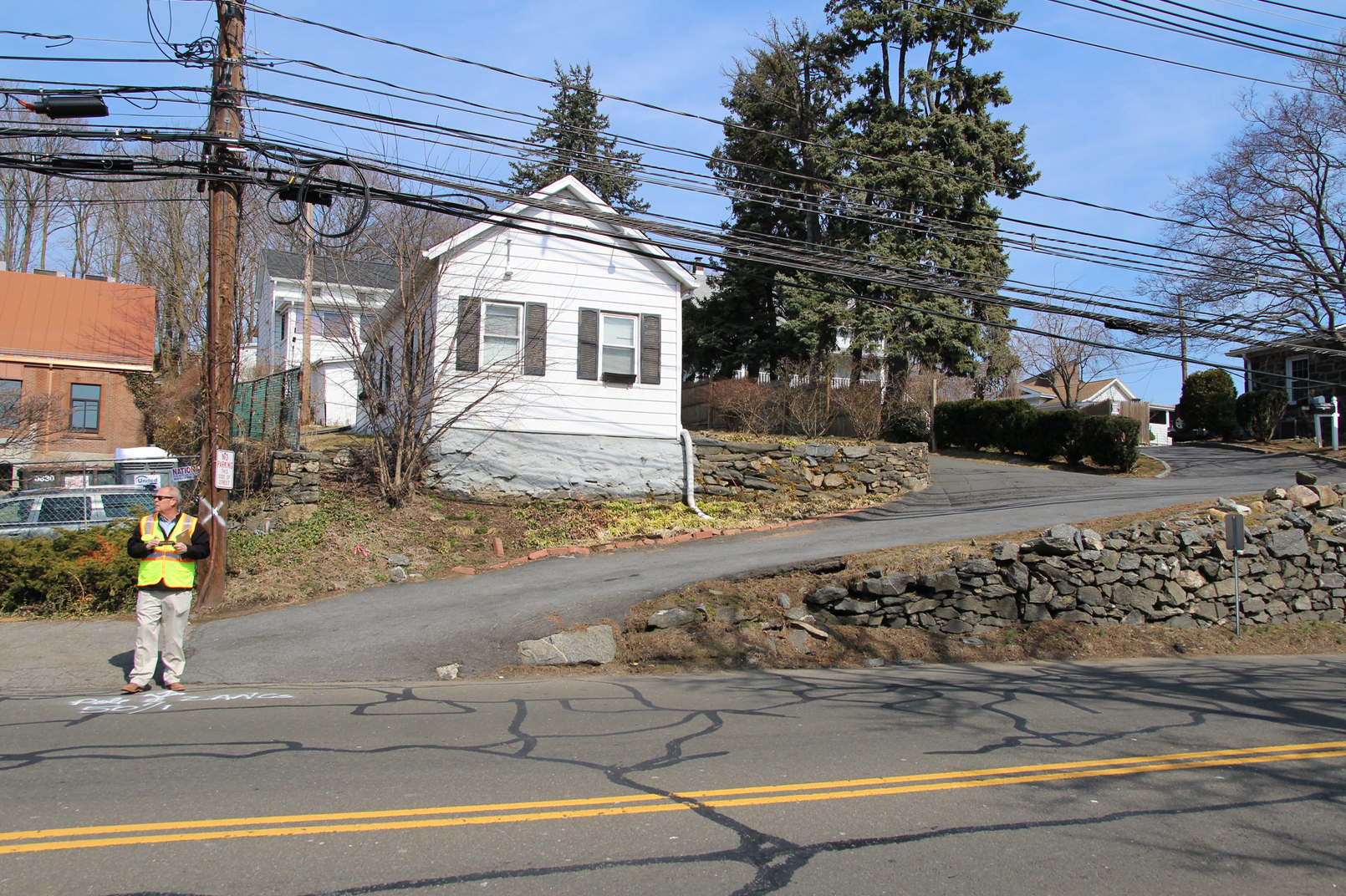 Just to the west of Glenville Pizza there is no sidewalk and pedestrians are forced to walk in the road. March 20, 2019 Photo: Leslie Yager

Further, there is a break in the sidewalk in front of the pizza parlor, forcing people to walk along the edge of the busy street.

At the intersection of Pemberwick Rd and Glenville Rd, residents agreed it is treacherous to turn left from Pemberwick toward Stop & Shop.

Suggested solutions ranged from a street light, to a roundabout, to separating left turn and right turn lanes. One longtime resident suggested putting a road through the municipal parking lot between the American Legion building and the fire house to take the pressure off the dangerous intersection.

Someone joked about putting in a bridge or tunnel, but the consultants said it wasn’t necessarily a bad idea.

The intersection of Riversville Rd and Glenville Rd is far from a perfect T. Even the crosswalk is not a straight line. There was discussion about the possibility of putting in a roundabout or straightening out the intersection. 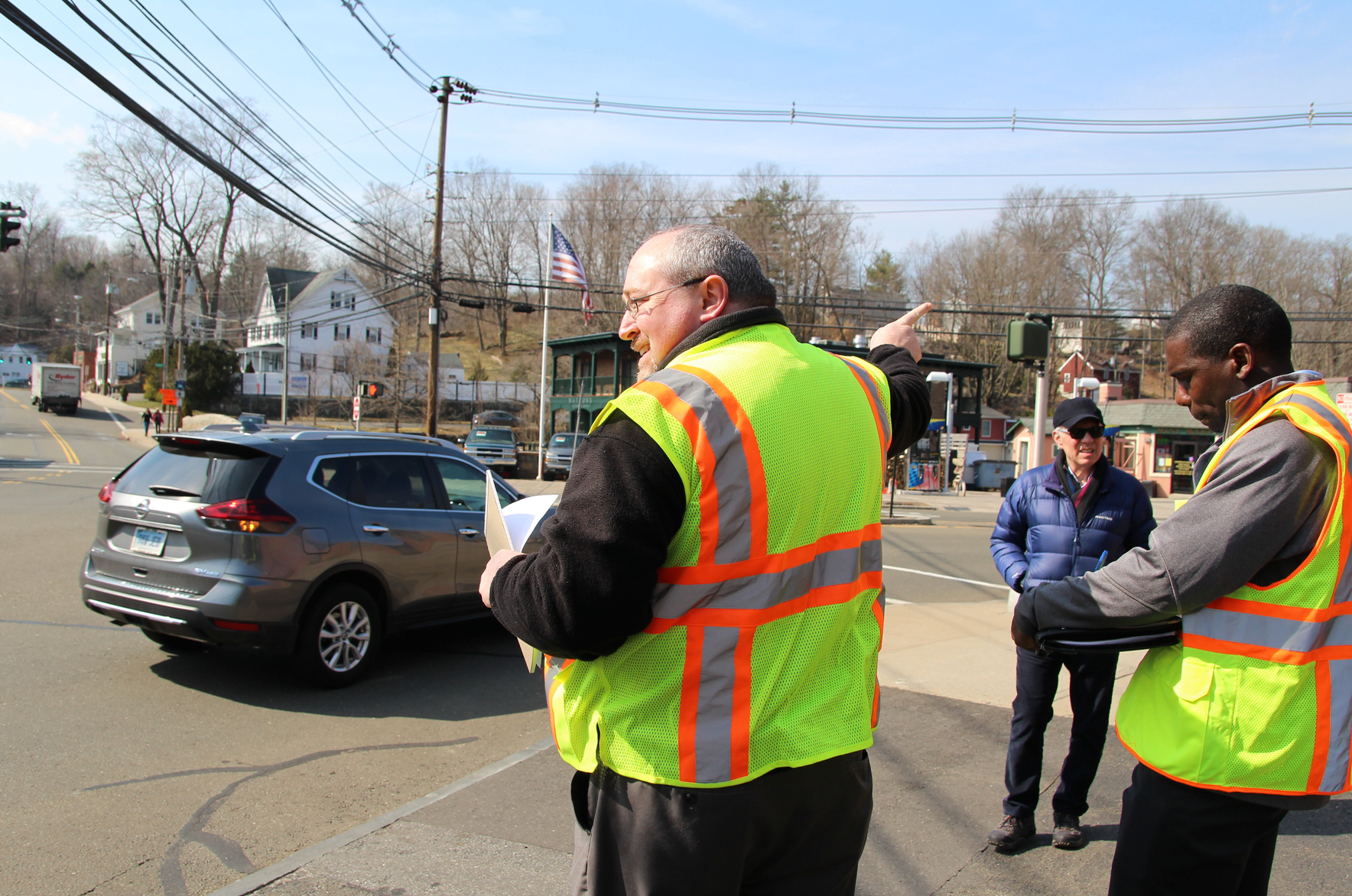 There is a dangerous bank exit on the corner of Glenville Rd and Riversville Rd, that puts cars out in the midst of cars turning right to Riversville. March 20, 2019 Photo: Leslie Yager 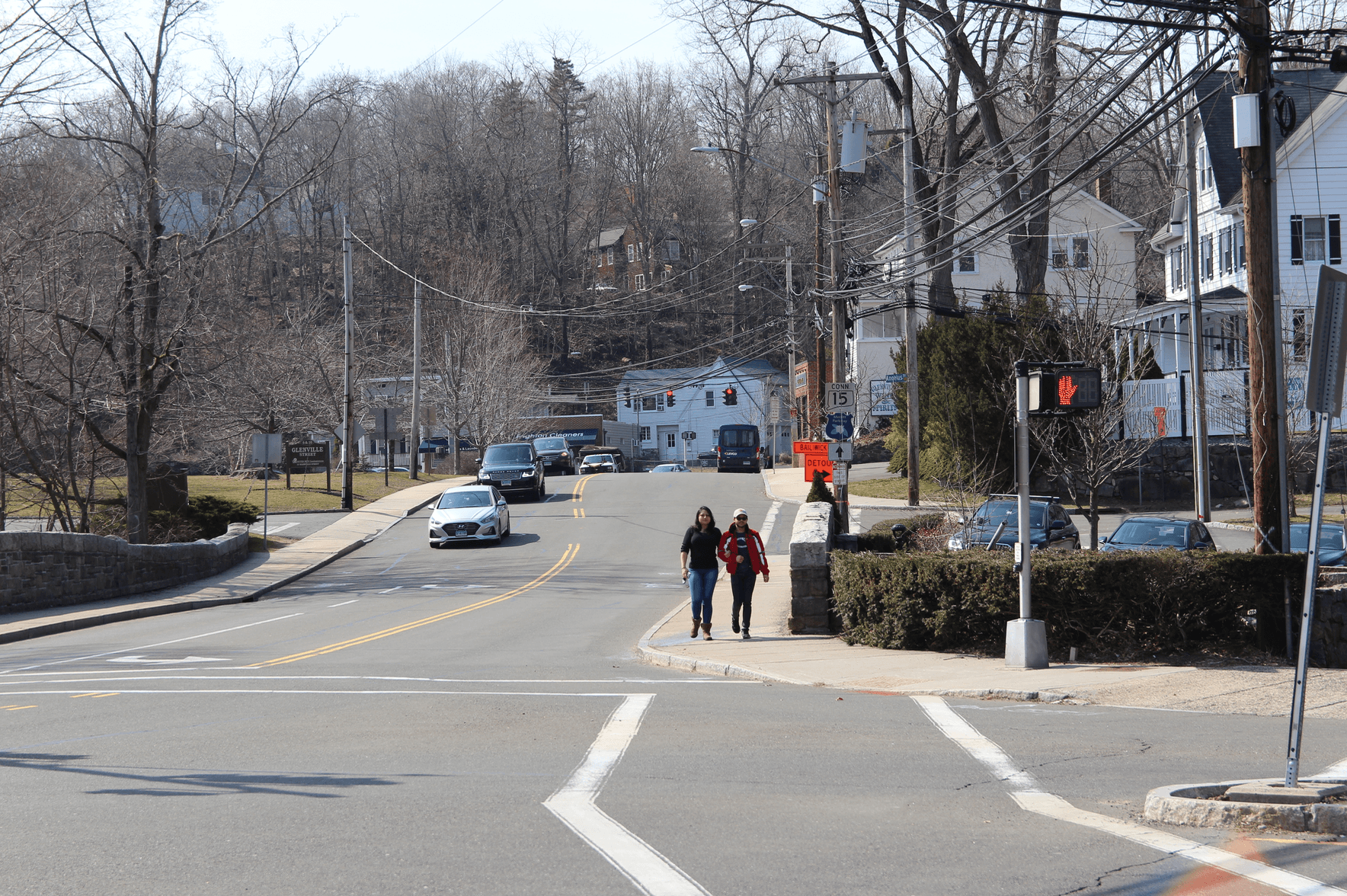 View from intersection of Riversville Rd to Glenville Street. (The traffic light in the distance is at the foot of Glen Ridge Rd by the entrance to the Stop & Shop shopping center. March 20, 2019 Photo: Leslie Yager 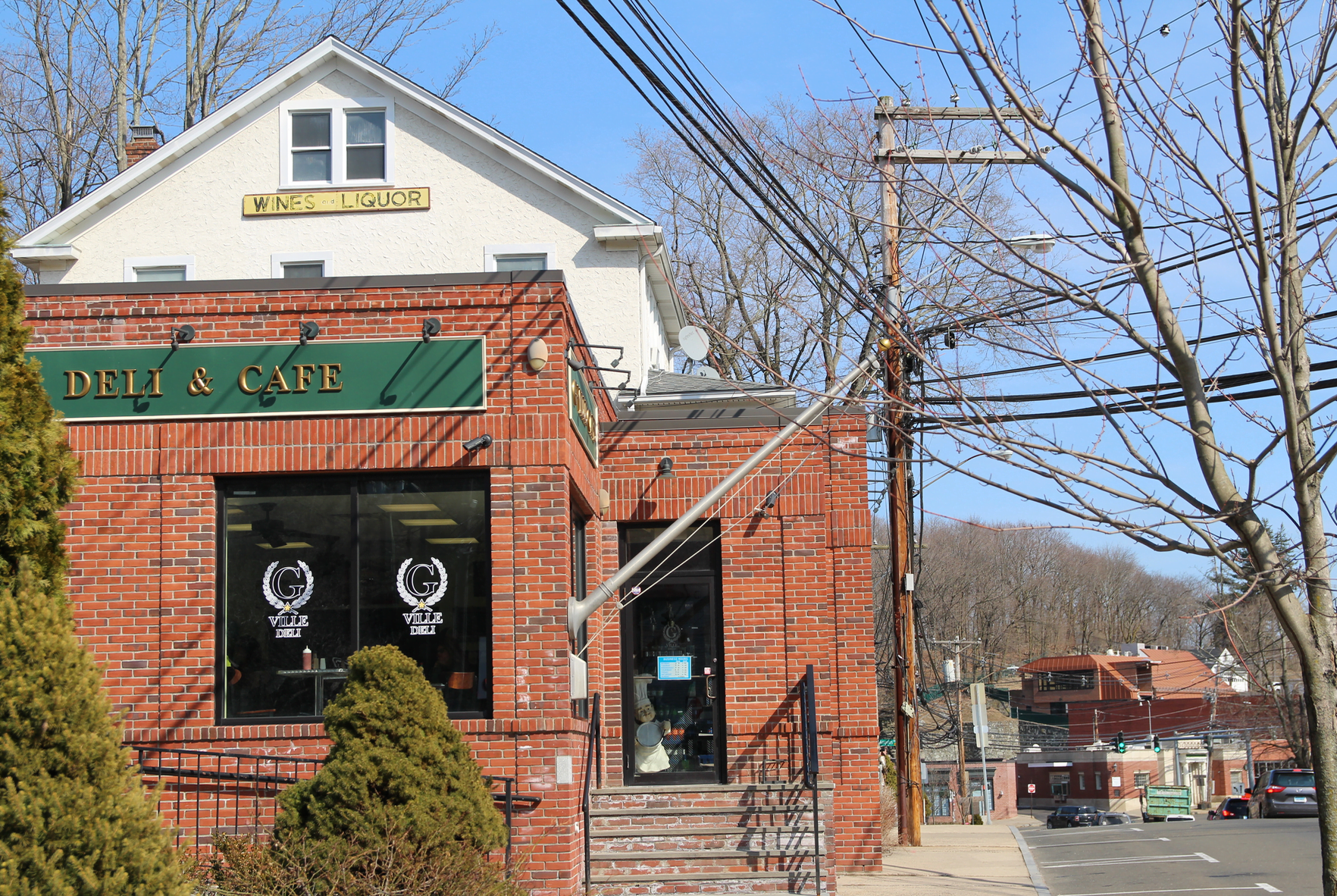 Residents complained that the parallel parking outside Glenville Wine & Spirits at 15 Glenville Street is used a a travel lane. March 20, 2019 Photo: Leslie Yager

Moving to the west, the consultants became commented on the “weird geometry.” the crosswalk isn’t straight, and edges of the median are beaten down by cars that clip the curb turning left in front of the fire house.

Residents said cars run the red light at the bottom of Glen Ridge Road (which is one-way) by Stop & Shop because the red light is so long. They also said drivers have a hard time exiting Stop & Shop and the intersection gets jammed.

Watson’s Catering owner Susan Scully said limousine drivers drive into her parking lot to do u-turns, and that with the Bailiwick Road Bridge project detour connecting Angelus Drive (normally a dead end) to Riversville Road through Bailiwick Country Club, it is treacherous for her to exit her lot and get to the stop sign.

At the end of the input session, Kwesi Brown from Milone & McBroom reviewed next steps: develop concepts, meet again with town, neighbors and stakeholders, and finally select a preferred improvement concept.

Mr. Brown said the focus of the project is not on the peak hours. “We are looking at it holistically. There will be plenty more opportunities to talk.”

Gabriella Circosta Cohee, an engineer with the Town, said the project will be on the town website under DPW and anyone who has input but missed the session Wednesday night should email comments directly to her at [email protected]