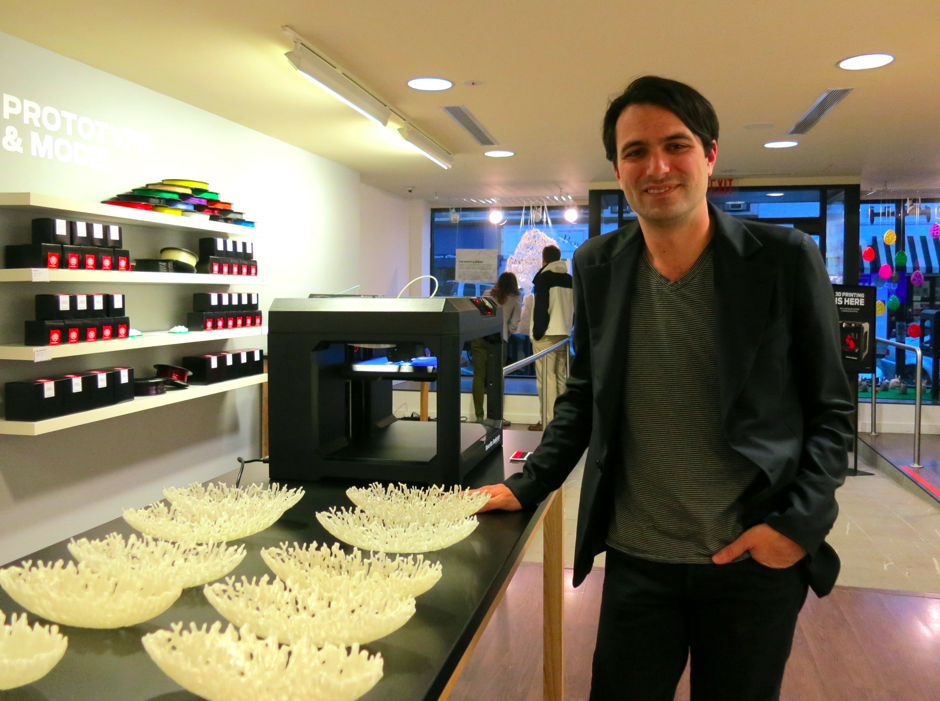 Francis Bitonti whose bristle couture dress is printed in 3D. The design is downloadable and customizable. Credit: Leslie Yager

Tuesday night MakerBot on Greenwich Avenue hosted designer Francis Bitonti whose couture dress, made from plastic on a MakerBot 3D printer, is featured in the store window.

The staff at MakerBot, which opened seven months ago in Greenwich, say the concept is still new to many.

“We have to inform people and tell them it’s really not that scary,” said Manager of Retail, Adam Lederfarb. “They come in the store and say, ‘What is this? What exactly do you do here?'” Lederfarb said staff enjoy taking new customers on tours of the store and watch them experience a series of epiphanies. 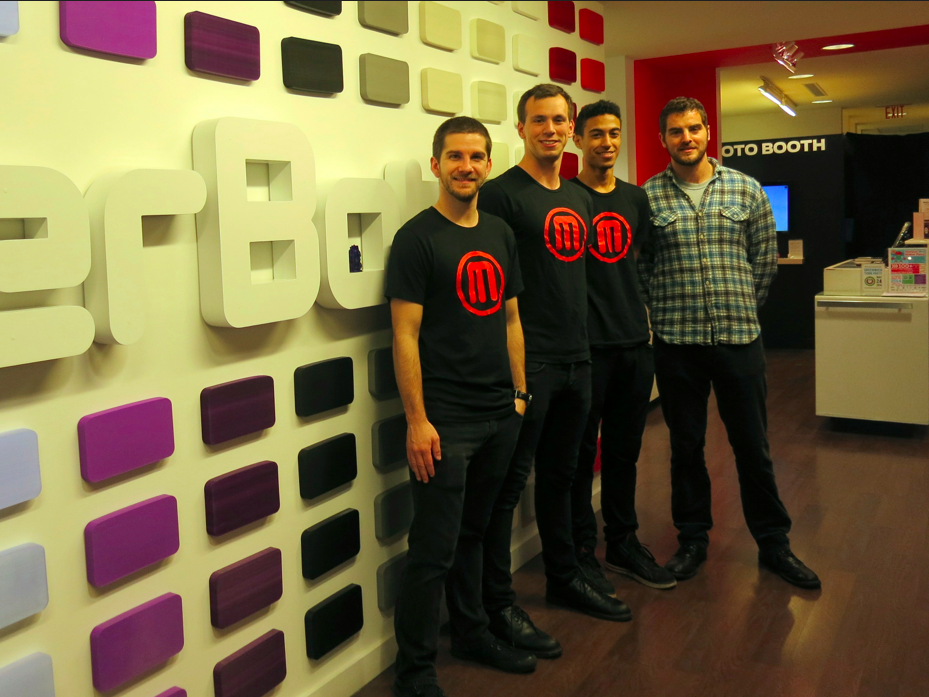 Lederfarb said oftentimes, a customer will subconsciously add a zero to a printer’s price tag.

“It’s $2,199, not $21,000,” Lederfarb said he often explains. “We sell 3D printers right here and there are affordable desktop models.” Lederfarb said once people realize the prices are in the range of a laptop computer, the possibility of owning one becomes real. Then the fun begins. MakerBot’s Thingiverse is an online destination for making, sharing and discovering designs.

Another misconception is about the plastic, which Lederfarb said is biodegradable. “The bioplastic is derived from corn,” he added. It’s guaranteed not to contain any heavy metals, phthalates or BPA. Asked how 3D printing might impact where goods are produced and whether the technology might abet the Made-In-USA movement, Lederfarb said, “People won’t have to send out for prototypes to China.” 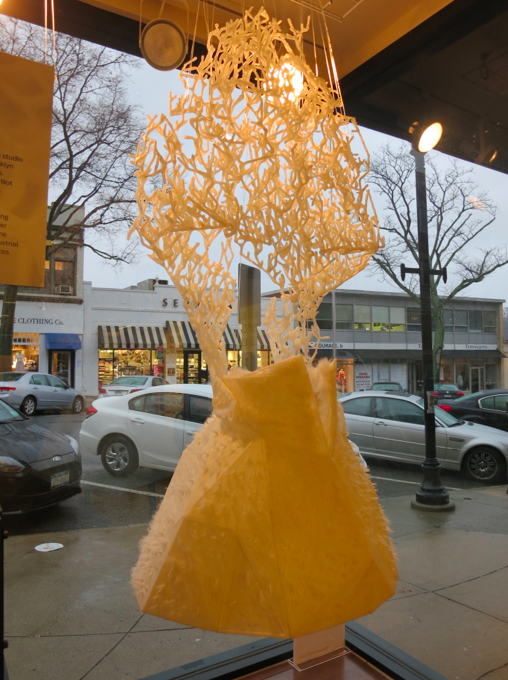 We wanted to make the body solidify into harder geometry, going from atmosphere to ice. We integrated a fur lining to ease in the transition,” said Francis Bitoni of his 3D printed bristle couture dress.

Francis Bitonti was in Greenwich MakerBot store to talk about his designs which include the limited-run collection of home goods the Cloud Collection. The decorative housewares can be purchased digitally, downloaded and 3D printed at a MakerBot Store. Also, Bitonti’s 3D printed couture dress, customizable and downloadable, is featured in the window of MakerBot in Greenwich.

“You can download it from Thingaverse,” the designer said of the bristle dress. Bitonti’s design process is a blend of cutting edge digital design and manufacturing technologies, aimed to transform mass production. 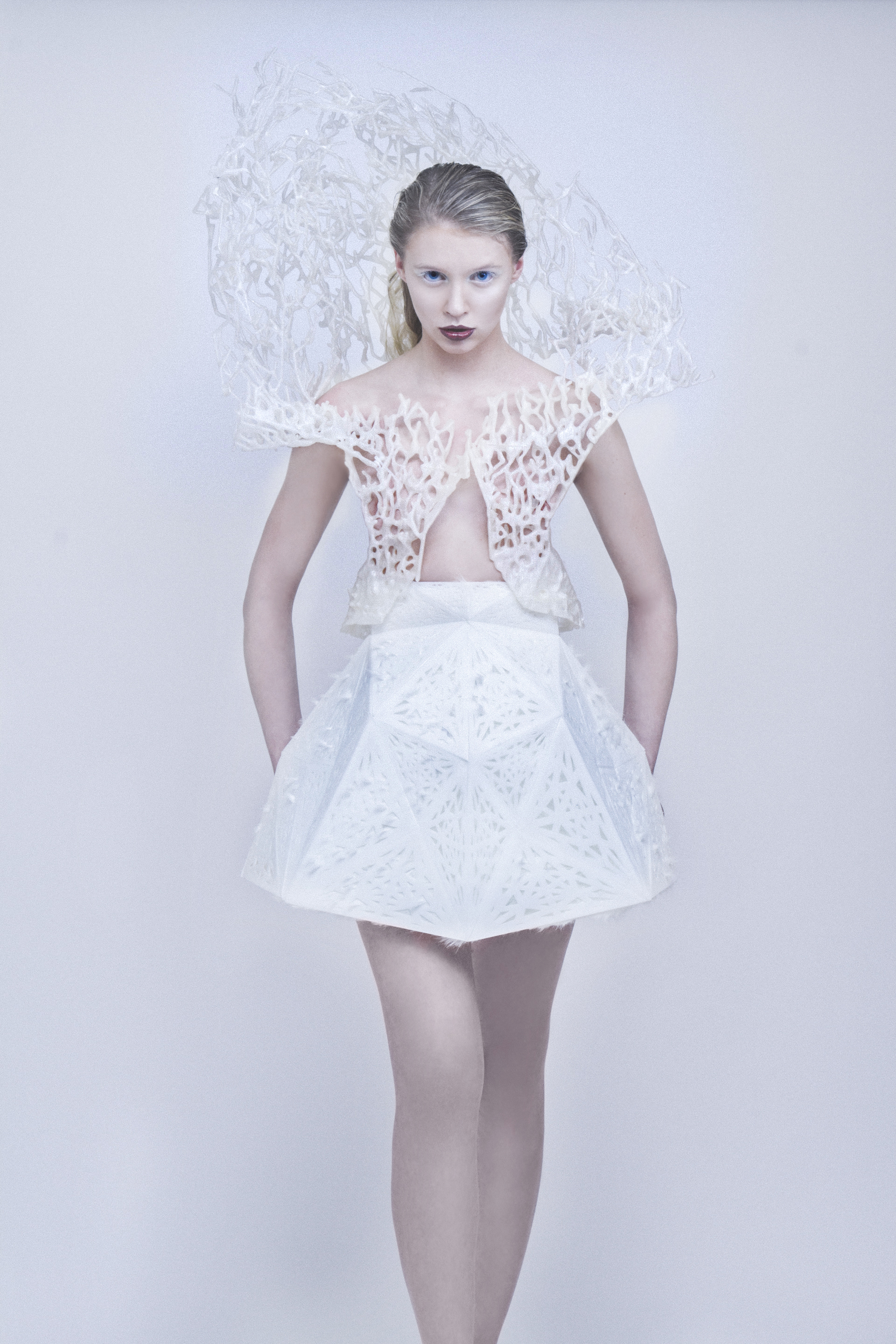 Of 3D Printing, Bitonti said, “This is not a gimmick. I think it’s bringing an international revolution. It’s a dramatically different way of manufacturing and pretty soon you won’t be able to imagine life without it.”

“As the printers get more sophisticated in the next ten years, I don’t see why they can’t have dresses that are functionally wearable and recyclable,” Bitonti said.

“The Flying Car of Its Time”

If anyone had doubts Tuesday night, the children spoke the truth. Sisters Ana and Demi DeMakes,  5th and 4th graders at Riverside School respectively, were giddy over the potential of 3D Printing.

“We love the idea of 3D printing,” said the older DeMakes sister. “We made charms for rainbow loom bracelets at the Darien Library in the TEA room,” said Ana, explaining that TEA stands for Technology, Engineering, & the Arts and that the library has 3D printing opportunities for children. “We also made a guitar pick for our dad,” she said adding that her father’s band RiverSideways is playing at the Greenwich Town Party in May. 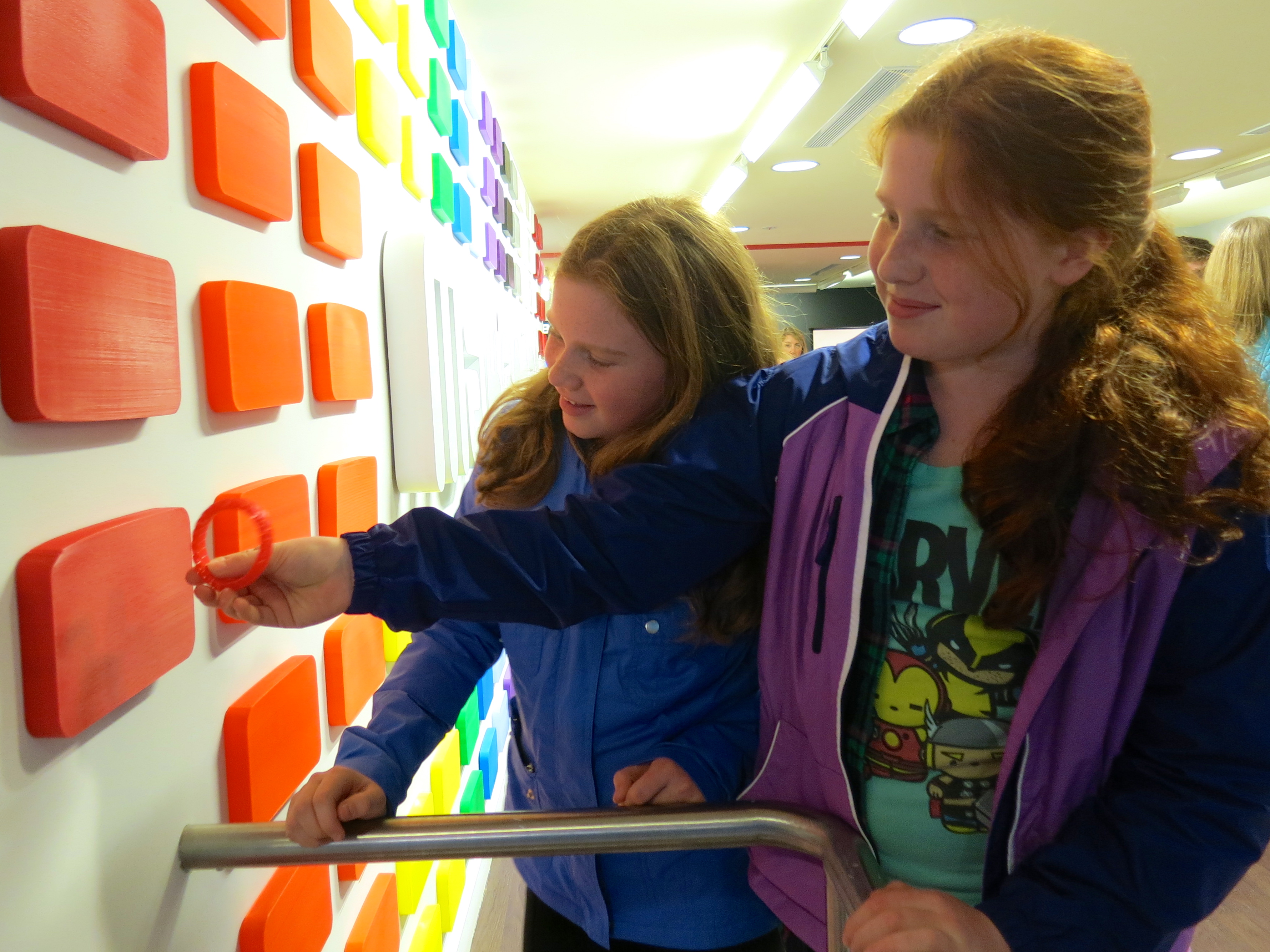 As she admired the red 3D bracelet the staff at MakerBot gave her, Ana said that having witnessed a  3D prosthetic arms being printed even inspired her school science project.

The DeMakes sisters described how they so badly wanted their parents to get a family 3-D printer for Christmas last year that they made a cardboard model of one as a gift. The girls are still waiting, but their enthusiasm is undiminished. The sisters talked enthusiastically about attending the Westport Maker Mini-Faire and the upcoming Maker Faire in Queens.

“I just think this is coming before its time,” said the younger DeMakes sister. “It’s like the Flying Car of its time!”

Print Out the Spare Part, Save a Fortune 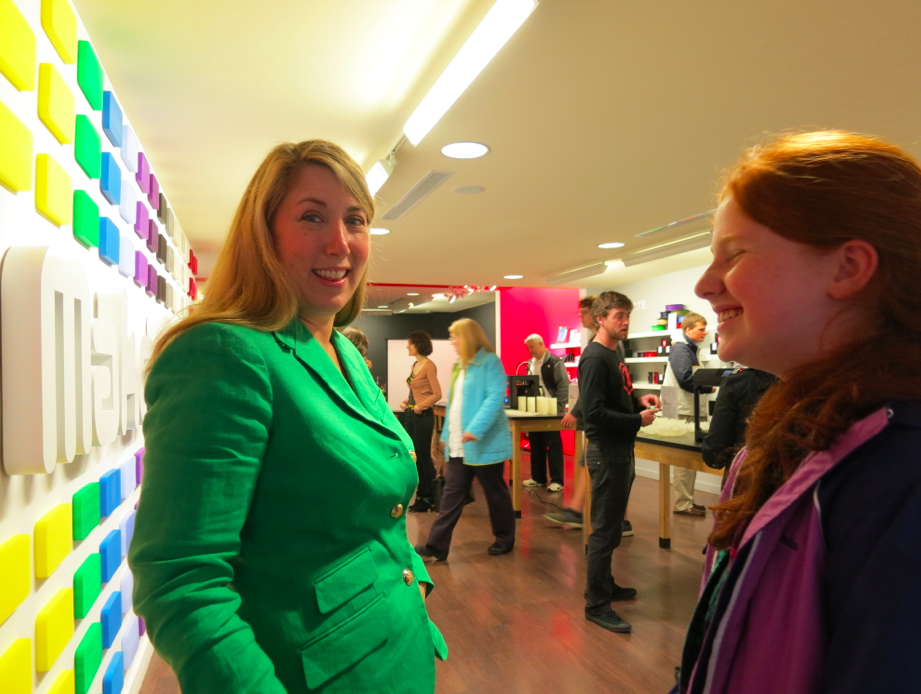 Jeni Howard of Greenwich, who does public relations for MakerBot, described recently printing out an “O-ring” for her broken hot tub and avoiding an otherwise costly repair. “We saved $800,” Howard said. “We took the broken piece, measured it and in two minutes we modeled it and printed it.”

Howard said 3-D printing it part of her family’s day-to-day life and that her children, 16 and 19, use it all the time. “My kids use it to solder electronics and to make funny things for friends,” adding that she likes to print out a new cover for her phone every week, just for fun. 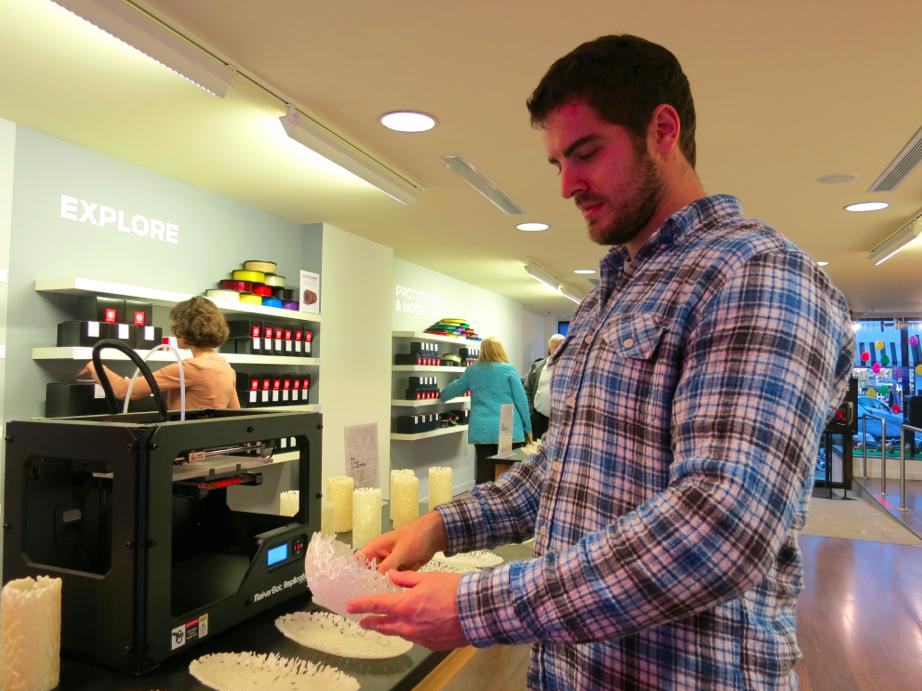 The Heritage is the File, Not the Object

The concept of printing three-dimensional objects on the kitchen counter may take a bit of time to wrap one’s mind around. A corollary of the print-it-yourself biodegradable object is that the value is in the design. “People think of keeping hold of a possession for a long time, but with 3D printing the heritage is in the file, not the object,” Lederfarb said.

Indeed, the DeMakes sisters are probably right in their depiction of the technology. 3D printing may just be the flying car of its time.

Maker Faires coming up in September at the New York Hall of Science in Queens and the Westport Mini Maker Faire on April 26 in Westport.