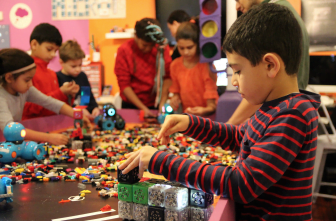 If you haven’t been to MacInspires in a while, things have changed.

Owner Travis Sluss, who pivoted from his retail-oriented model on Greenwich Avenue a few years ago with a move to 37 West Putnam Ave, and nowadays caters to the voracious appetite among young people for STEM enrichment.

Catering to curious boys and girls, Travis has created the environment he would have loved when he was that kid sitting under a tree dismantling a radio while the other kids were playing sports.

There are 10-week programs that start to enroll on Jan 7. There is a new membership option. There is also a 3rd Friday movie night series with STEM activities and pizza. There are holiday break workshops for the three days after Christmas. And, as always there are birthday parties and private instruction options. 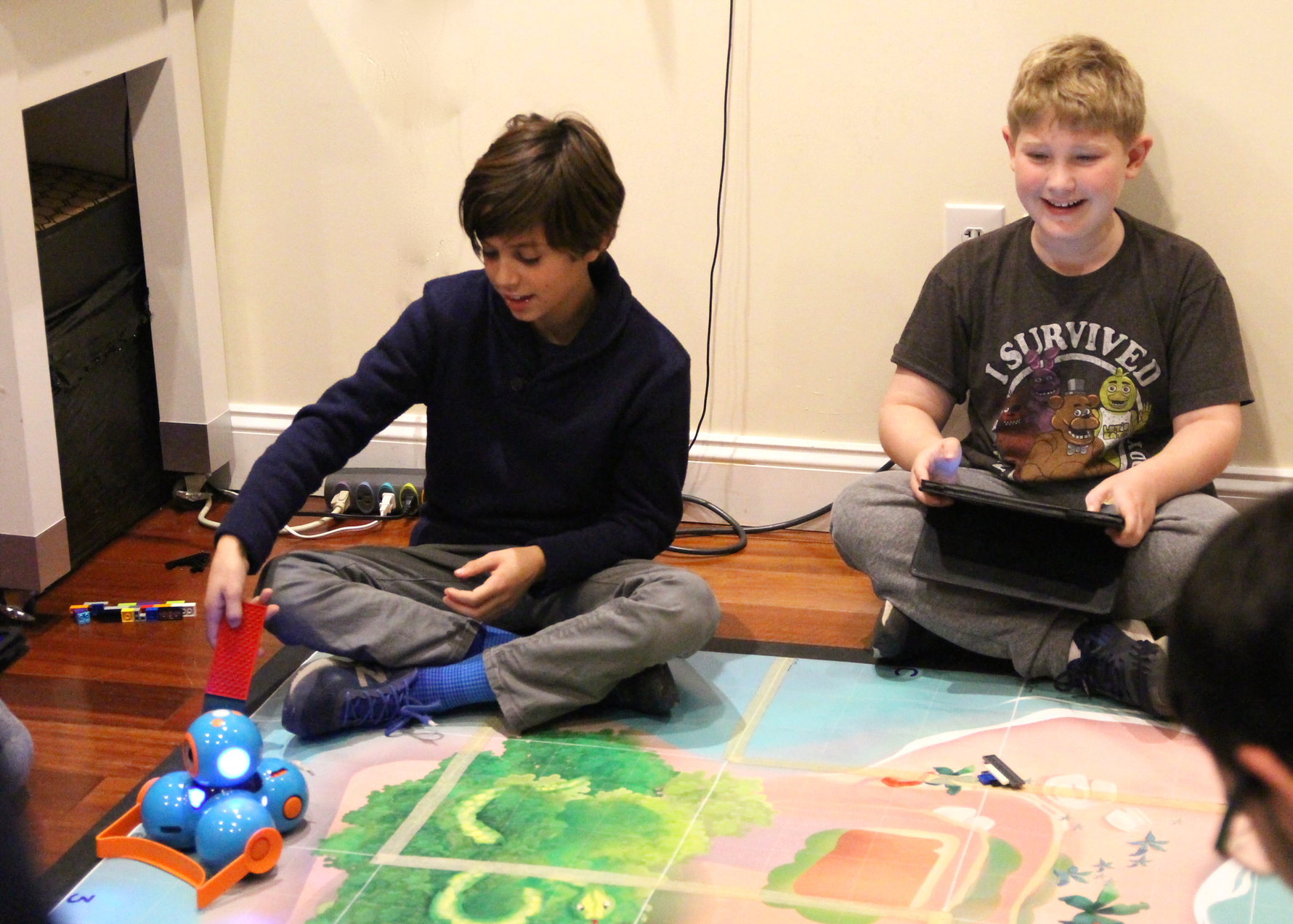 A popular new option for young people who just can’t get enough STEM is a Maker Membership, which was an option he added about a year ago in response to demand for enrichment programming after school.  “It’s the best deal we have,” Travis said.

Members can come to MacInspires from 3:00pm-6:00pm, Monday to Friday.  The price boils down to as little as $13.00 a day for members who sign up for the maximum enrollment, which is only 8 weeks long.

“The maker members all have their own story,” Travis said. “They are all really talented in one way or another and we’re here to support that. The idea is to help them uncover new talents.”

Membership is perfect for makers ages 10 to 17 to hang out with like-minded people.

As students build their skills, they operate and use maker tools and equipment on their own. They’re given the educational opportunity to assist in teaching and tweaking MacInspires Makerspace equipment.

“Members can join ongoing classes already under way, but usually they get training so they can run 95% of the equipment here on their own,” Travis explained. “They’re encouraged to develop projects and challenges that they want to accomplish with our assistance.”

“What’s neat is you see them mature over the course of the time they’re here,” Travis continued. “Depending on the member they’ll run with things and we remind them we’re here to help. Others ask for more help.” 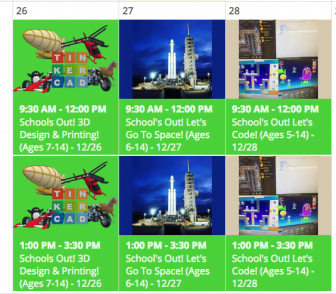 During holiday break the 3 days after Christmas there will be a series of workshops at MacInspires Greenwich.

You can click right from the event on the calendar to registration!

And every month MacInspires have a movie night with a 3-hour program full of STEM activities.

The movie night is a relatively inexpensive program as it is more free form. Boys and girls can expect pizza and a host of STEM activities.

“They’ get a taste of the different things we do here, and if they want to dive in further, they can enroll in a program,” Travis said about the 3-hour movie nights. 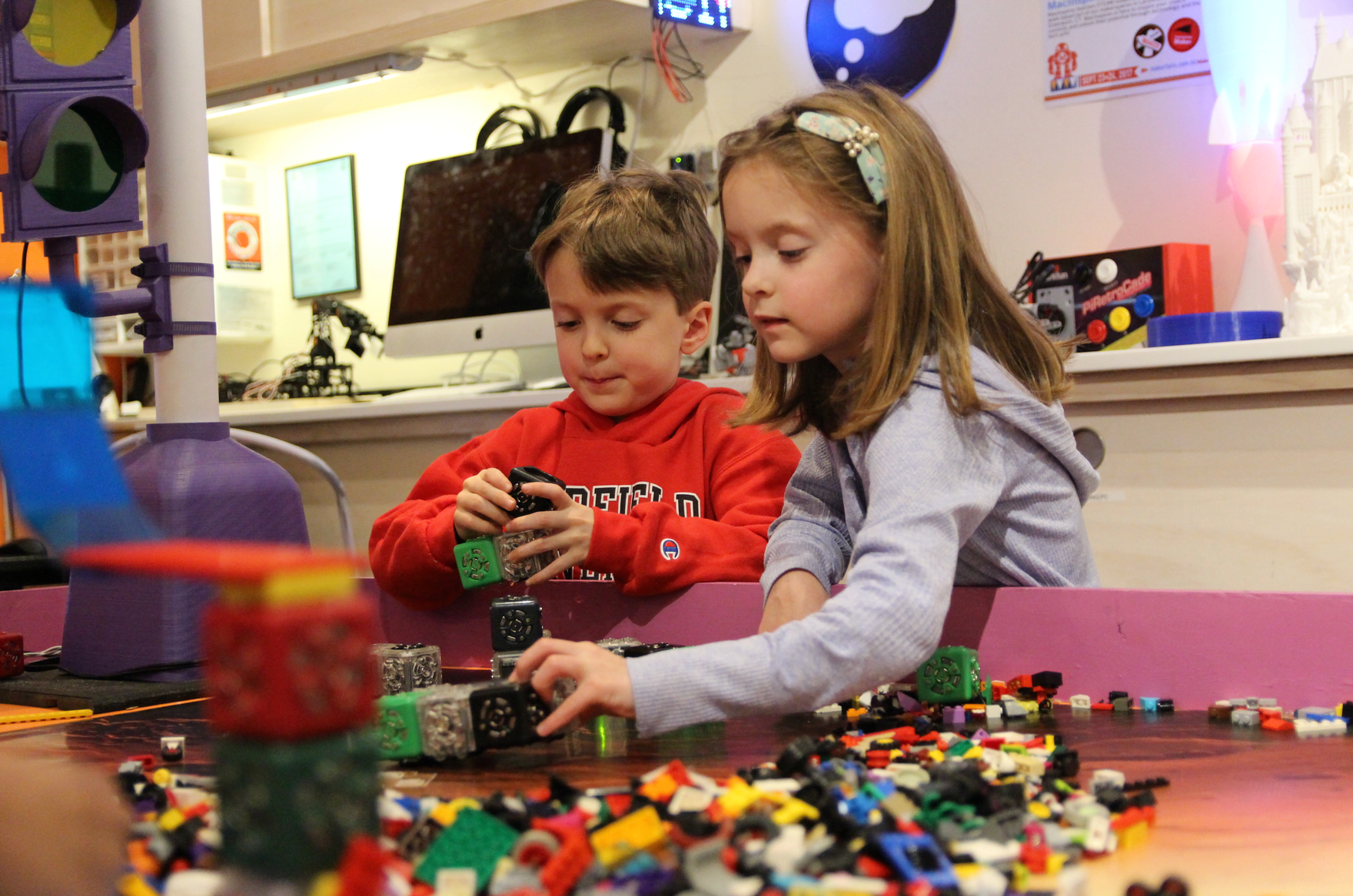 Recently in honor of Computer Science Week and hour of code MacInspires held their an annual Hour of Code event. Photo: Leslie Yager

Enrollments start week of Jan 7, 2019 for any of the 10-week programs, but it is possible to prorate the price down to six weeks. There is something for everyone from ages 5-14. (Pricing is on the website).

“Our groups are never more than six kids,” Travis said. “This is why they get individual time and if someone is gone for a week or two, when they come back they jump back in. Everyone gets enough individual, personal attention that it works really well.” 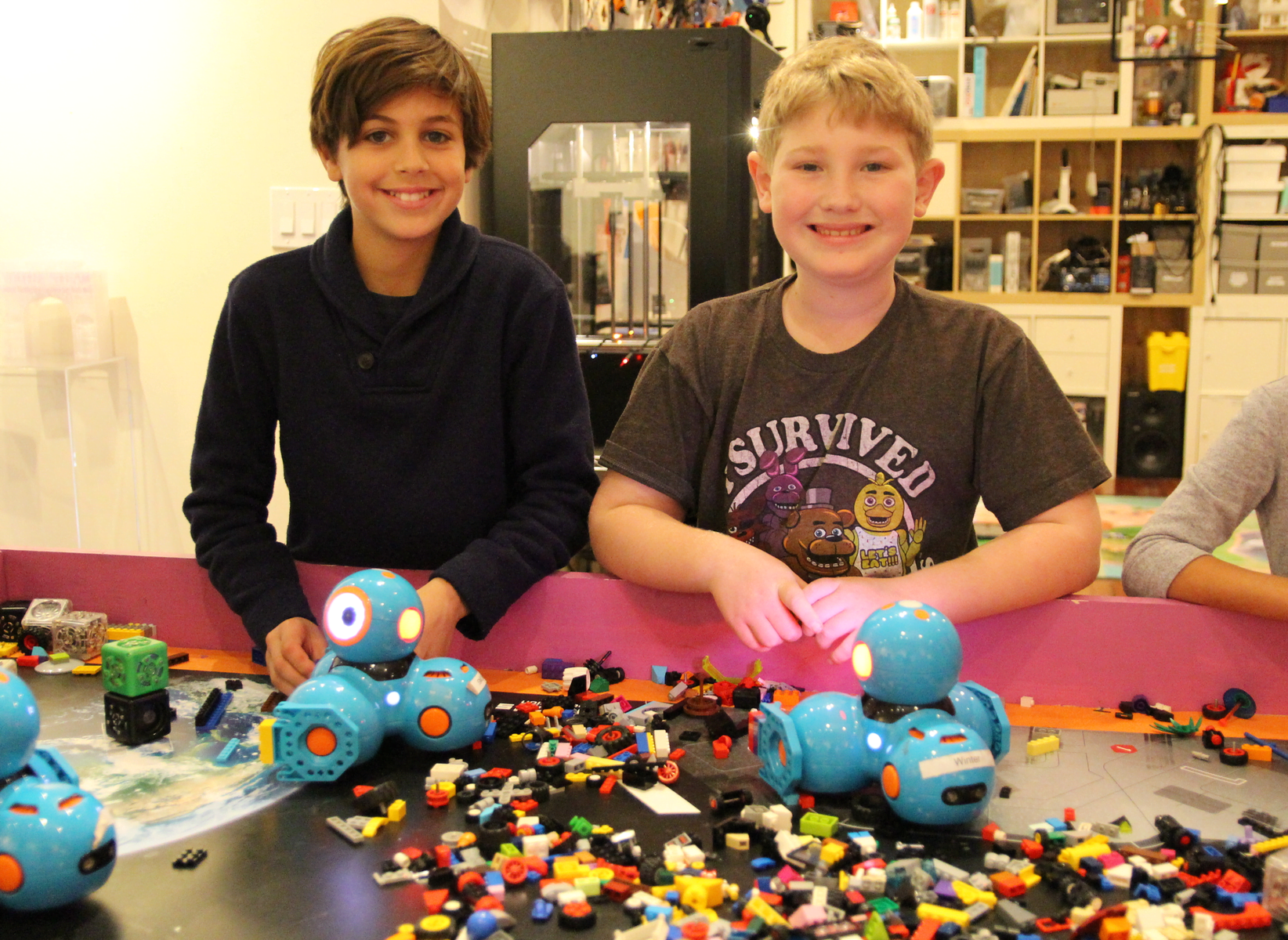 Recently in honor of Computer Science Week and hour of code MacInspires held their an annual Hour of Code event. Photo: Leslie Yager

Recently in honor of  Computer Science Week and hour of code MacInspires held their an annual Hour of Code event.

“We offer a free event every year because we like the mission of Hour of code,” Travis said. “It’s a non profit thing, and we want everyone to be able to code – not just people with resources.”

Travis said usually every year half the group is new. “We hope they like what they see and that they’ll come hang out with us,” he said.

Margaret Mullen, director of operations at MacInspires in Greenwich, who happens to be a Greenwich parent of twin freshmen girls at GHS was busy helping kids during the Hour of Code event.

“Not all kids want to do sports programs. Sometimes you have to find the ting for the kid who prefers to use their hands and is more tech driven,” Mullen said. “A lot of what we do is help for the future.”

Mullen said MacInspires Girls Coding Club here is becoming more popular because there is a gender gap in the field they’re trying to break.

“We started it here at the Makerspace and now it’s filtering into the elementary schools in the after school programs,” she said. 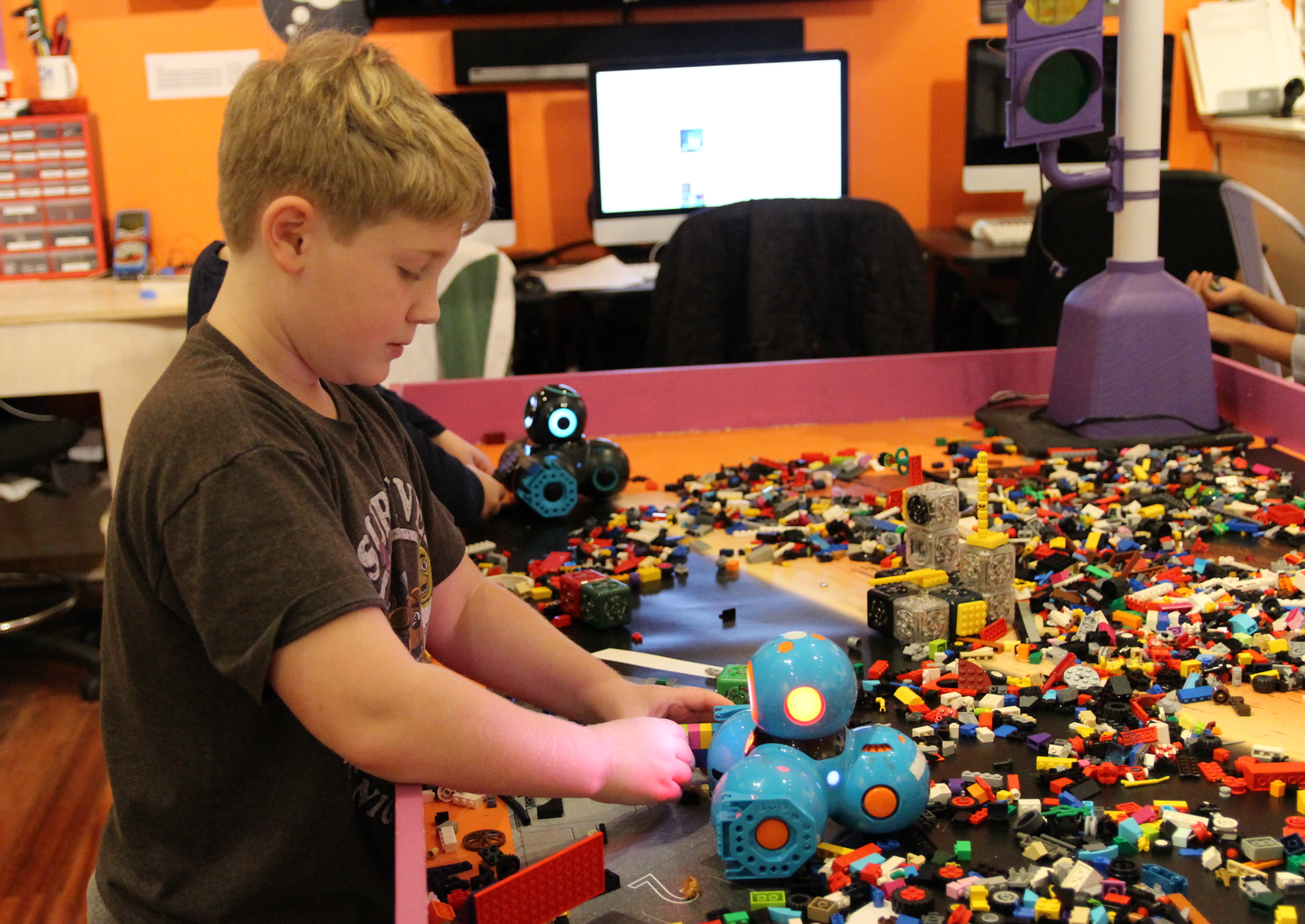 “We still do private instruction and birthday parties,” Travis said, adding that his student Maxwell had had his birthday party at MacInspires.

“Maxwell had his birthday here and he built a computer. The whole table was filled with components,” he said.

“Travis ordered all the parts and it was truly inspiring. They built this amazing machine,” said Maxwell’s mom, Nancy, taking out her cell phone to share photos of the computer back in her son’s room.

“These are cool moments for me,” Travis said. “I remember as a kid I built a computer. It’s cool to have that moment with these kids.”

“I’s a nice meeting ground for harvesting friendships through similar interests,” Nancy said. “You ride horses you make friends with the horsey people. You come here and you’re with other techy people. Kids make friends here,” she said. “I’ve seen a kid say to parent, ‘I made a friend. Can we have a playdate?'” 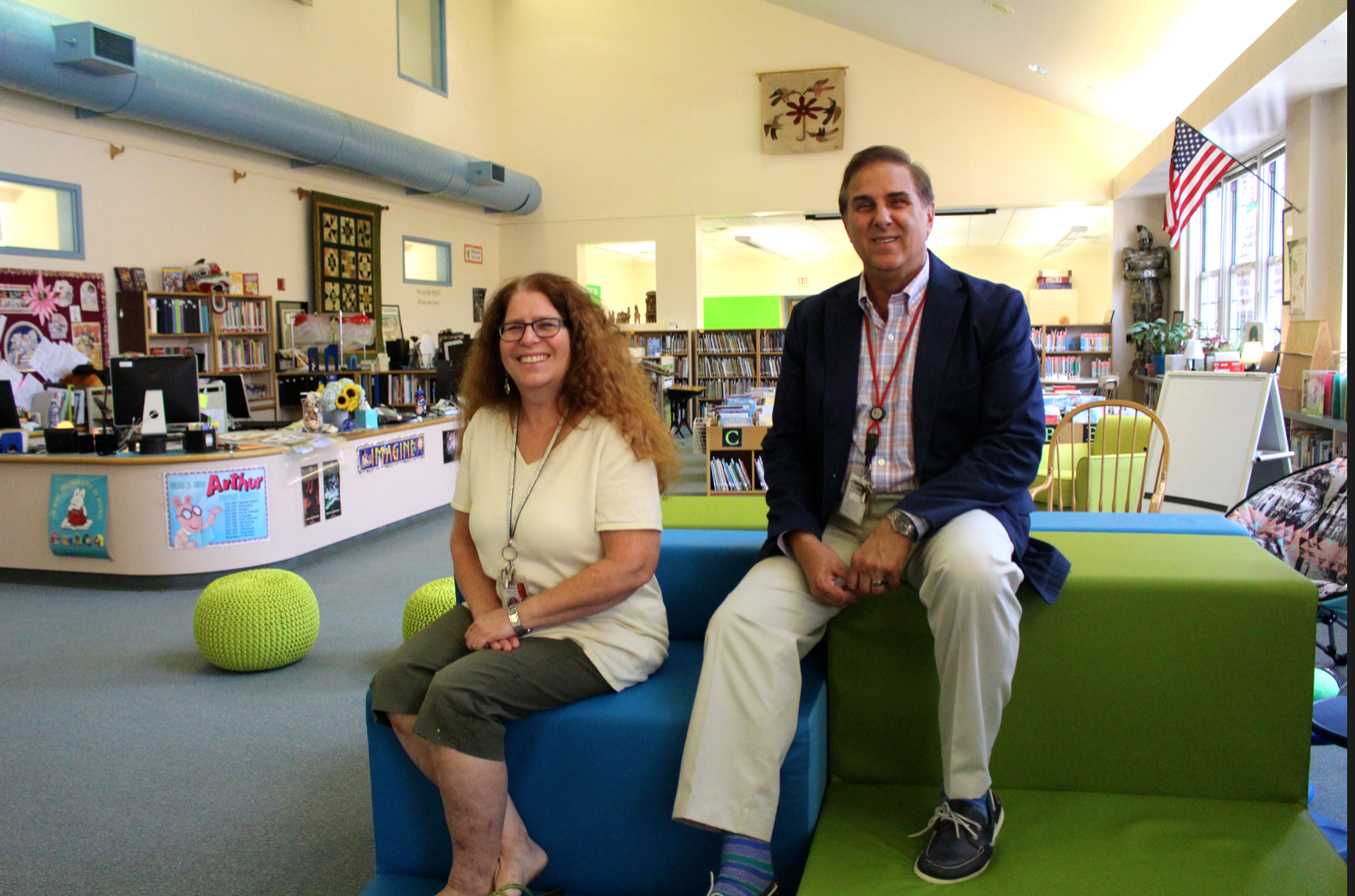 Nancy Shwartz, and Gene Schmidt in the Learning Commons at Cos Cob School. With the benefit of a grant from the Alliance for Education, the team was able to rethink the media center and create a space conducive to collaboration and different ways of learning. The Learning Commons features a Makerspace, where children experiment and explore. August 2015 Credit: Leslie Yager

“Also we’re going to more and more public and private schools locally,” Travis said. “We’ve been honored to teach in Greenwich Schools and in Westchester for over four years.”

“We teacher over 350 kids in the schools and makerspaces combined,” he continued, adding, “We are here to enrich the kids.”

Instructors say it’s been rewarding to visit local schools where the makerspaces provide a more advanced and cohesive environment for STEM and STEAM.

Travis said the school programs are especially important for kids whose  families have to work and can’t drop them off and pick them up from either he Larchmont or Greenwich locations. 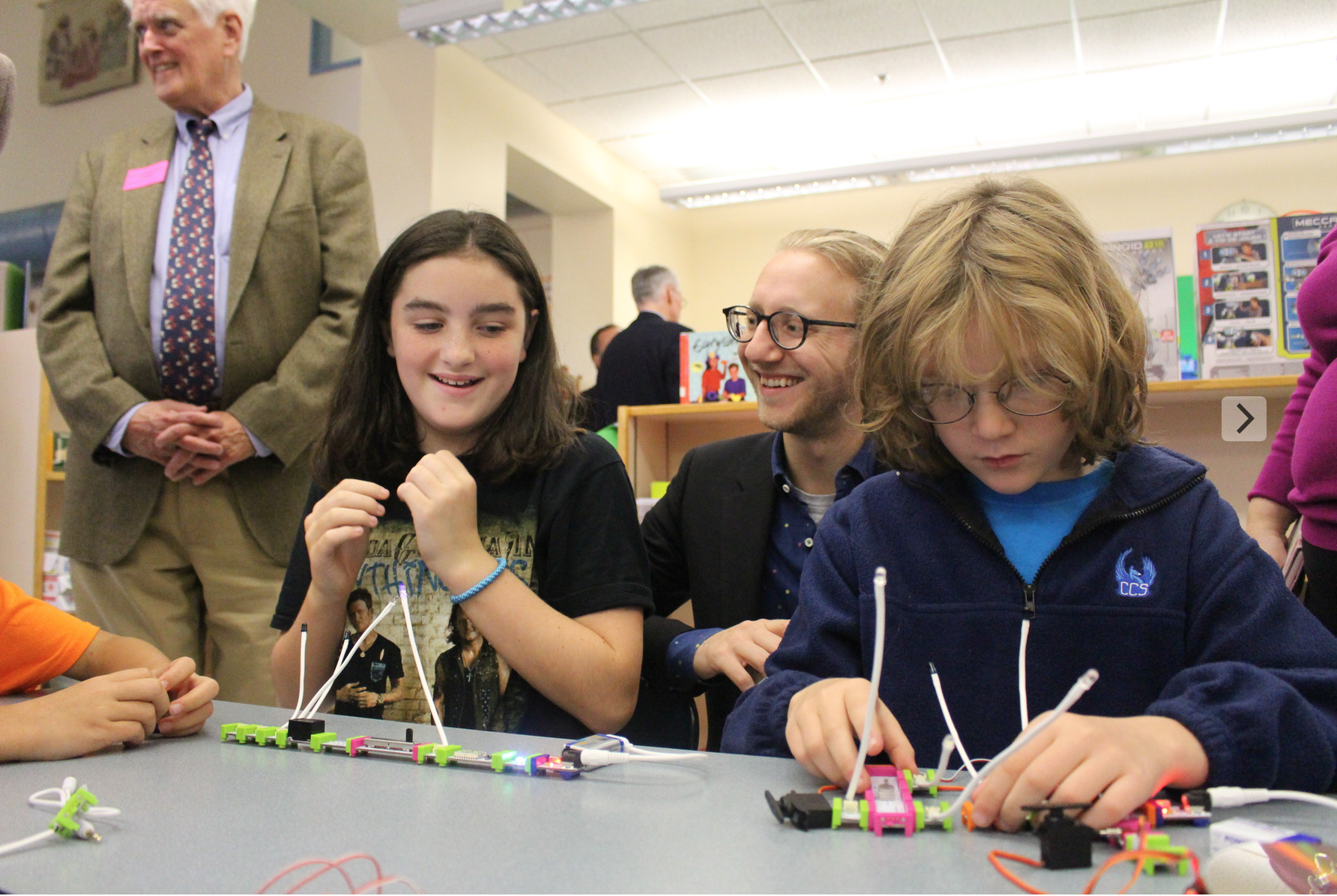 At the opening of Cos Cob School’s makerspace at Cos Cob School students got some help from MacInspires Travis Sluss, Oct. 5, 2015. Credit: Leslie Yager

One of the first makerspaces in the Greenwich elementary schools was at Cos Cob School and MacInspires was hired to help develop the makerspace in their media center and get the teachers comfortable using it.

“We love the staff at Cos Cob School and Principal Schmidt who has been a supporter of ours for many years,” Travis said. “Media Specialist Nancy Shwartz has also been a great supporter.”

Catering to the Curious: MacInspires Summer STEAM Camp Takes the Heat Off Learning

Exploring Passions and “Failing” in a Safe Environment: Cos Cob School’s Innovation Space 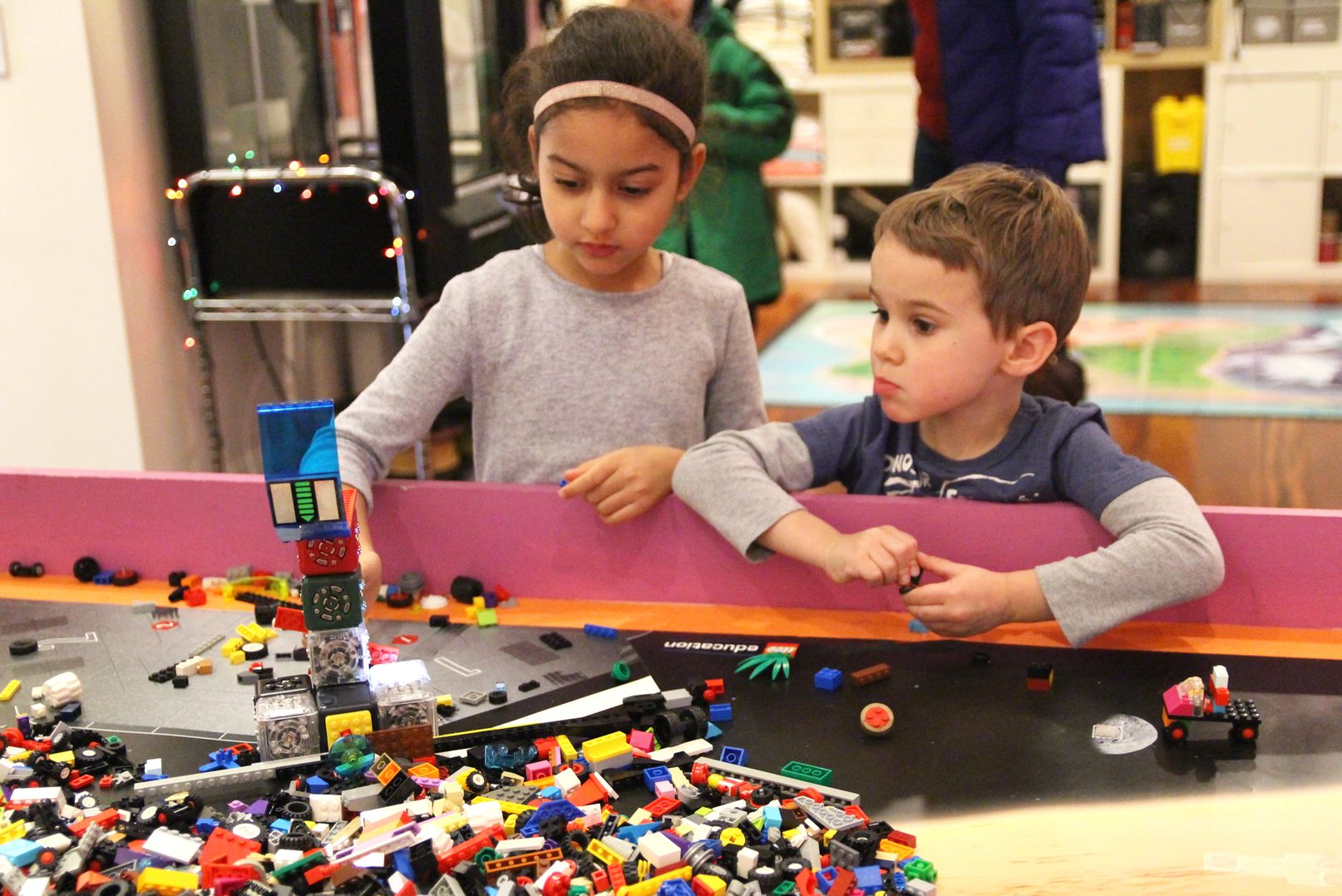 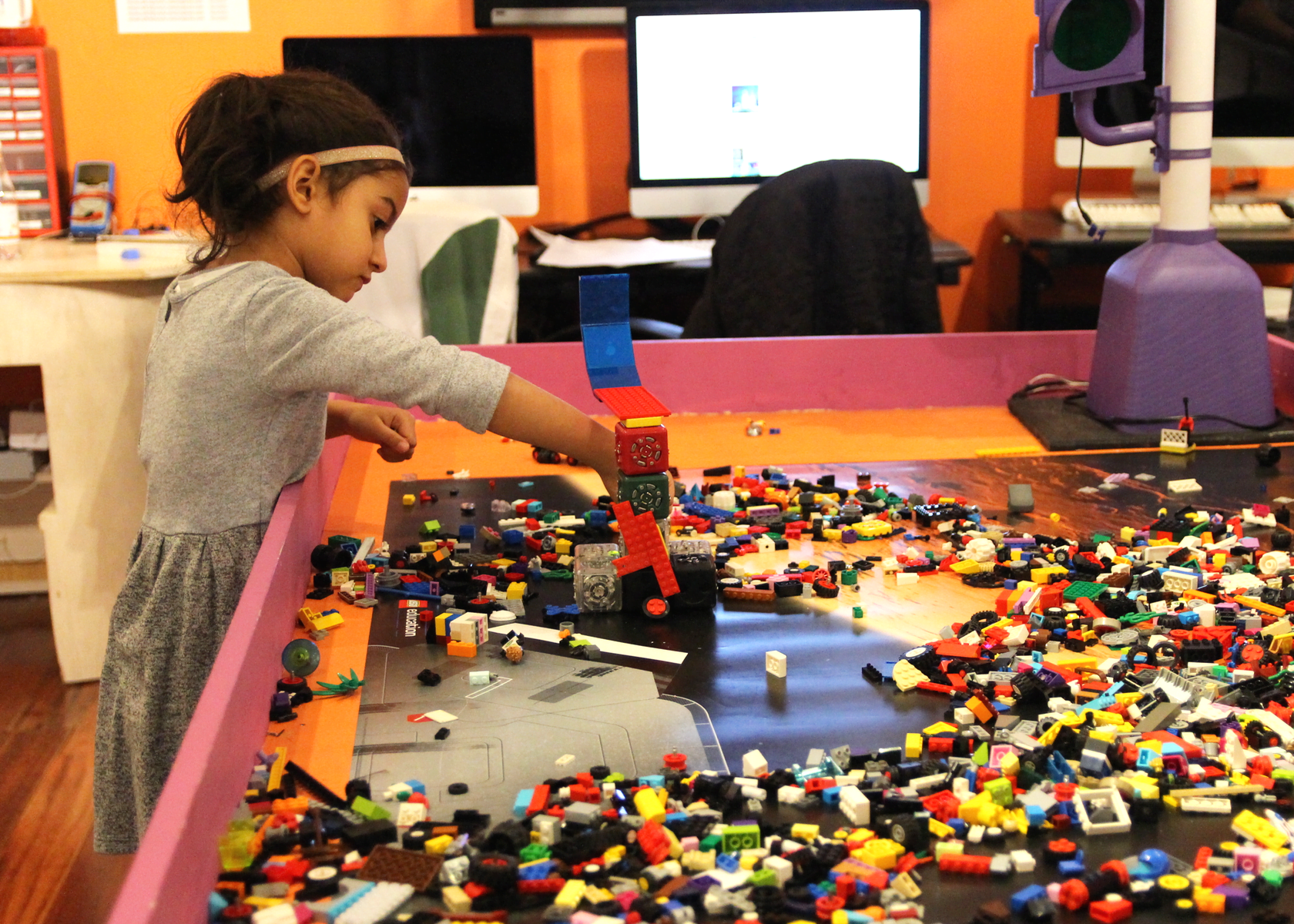 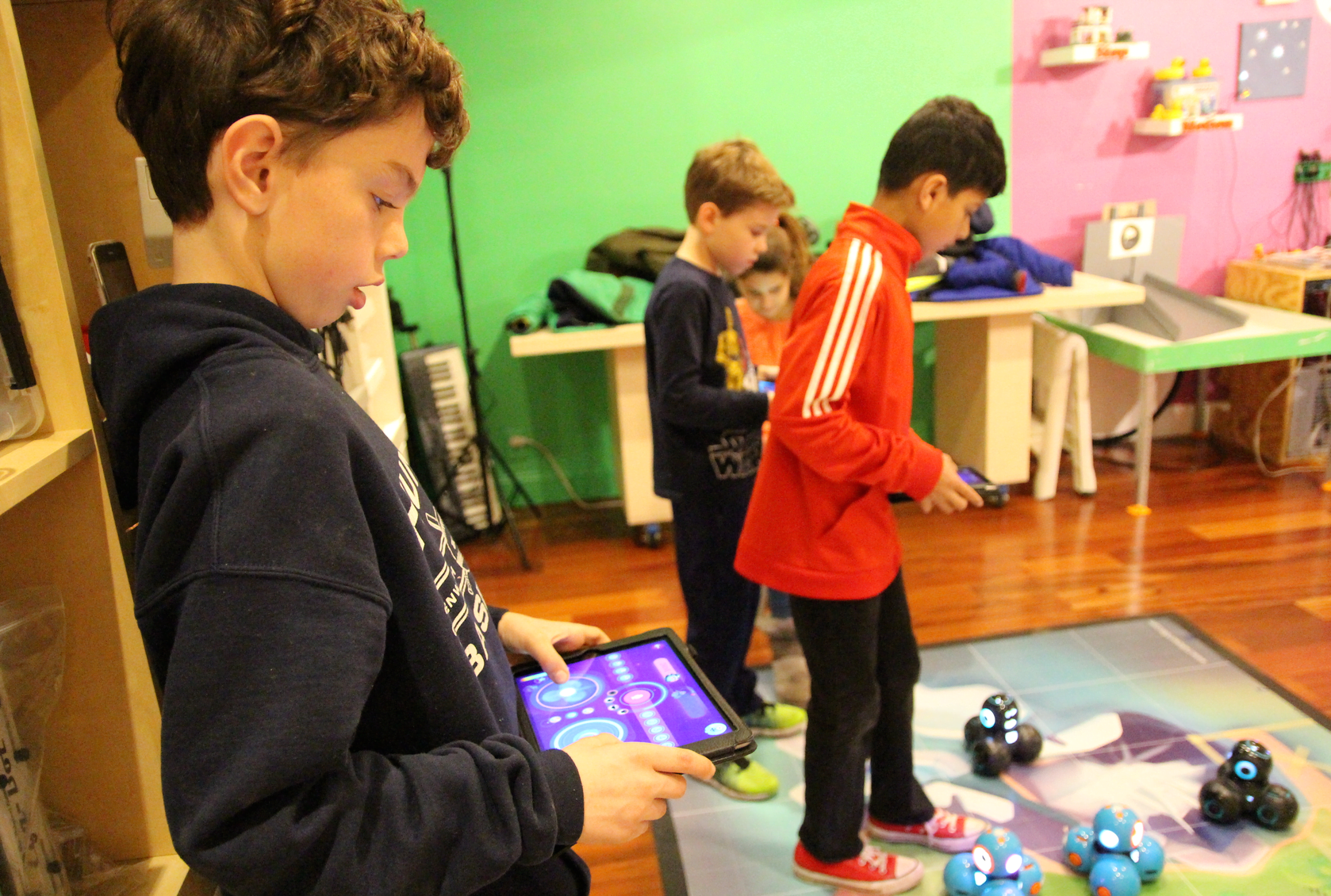 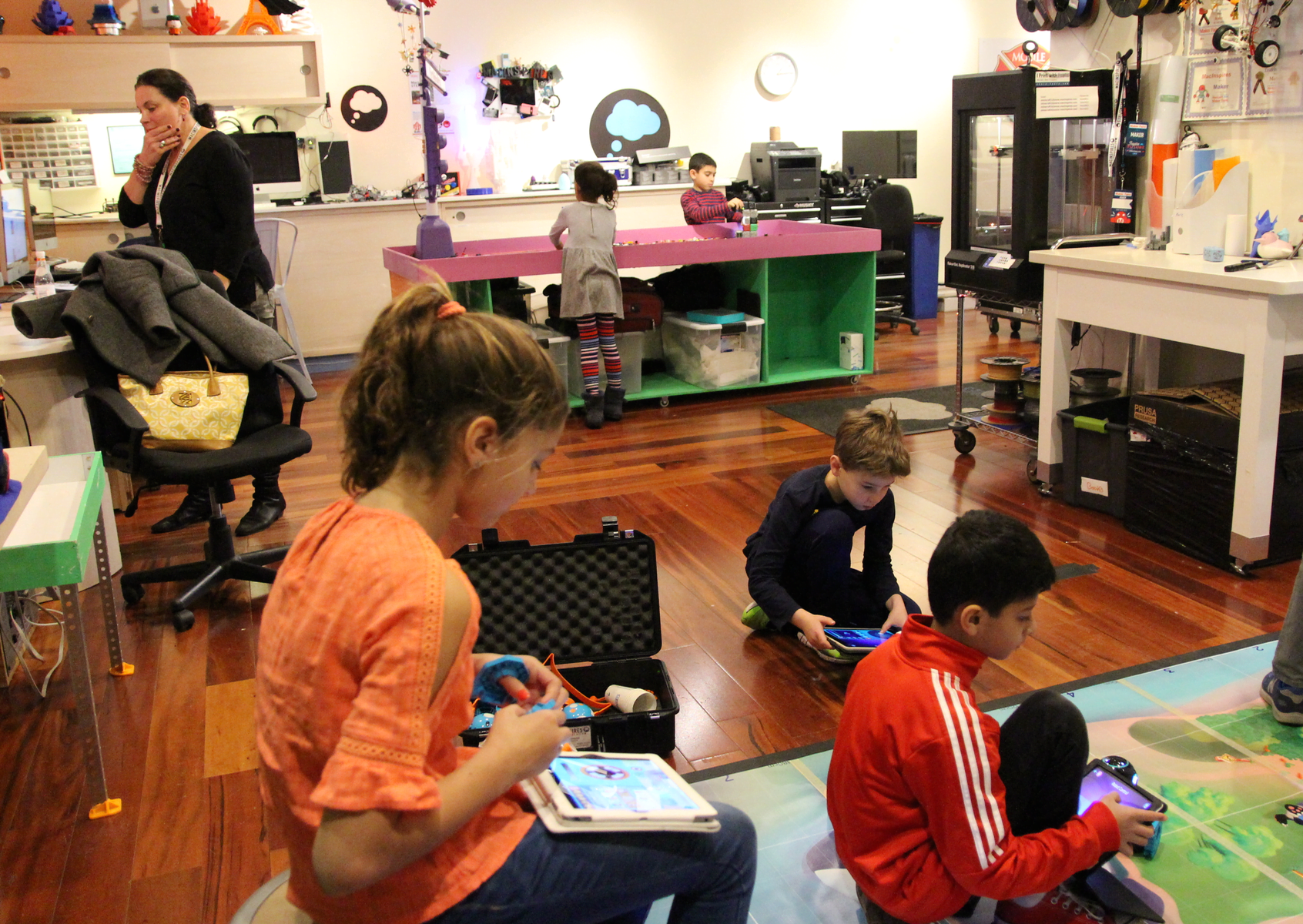