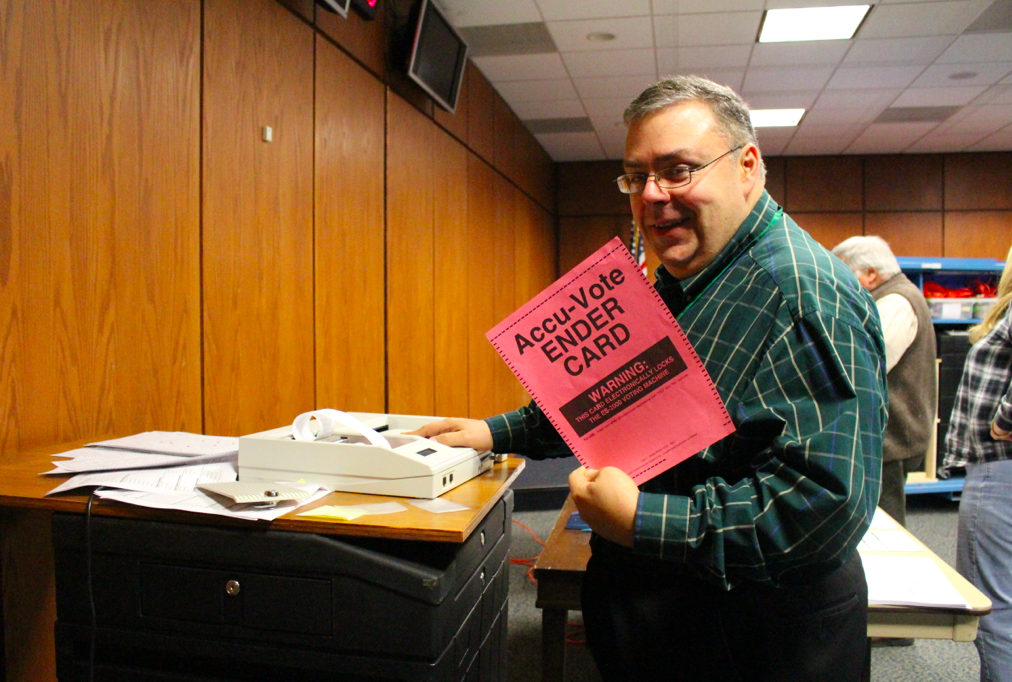 On Friday, Greenwich’s two registrars of voters, Fred DeCaro (R) and Sharon Vecchiolla (D), along with a team of workers, spent the day prepping Greenwich voting machines for the Nov. 4 election.

A full day of tedious work was done before the voting machines were sealed and locked inside blue metal boxes that will be wheeled into the polling stations. 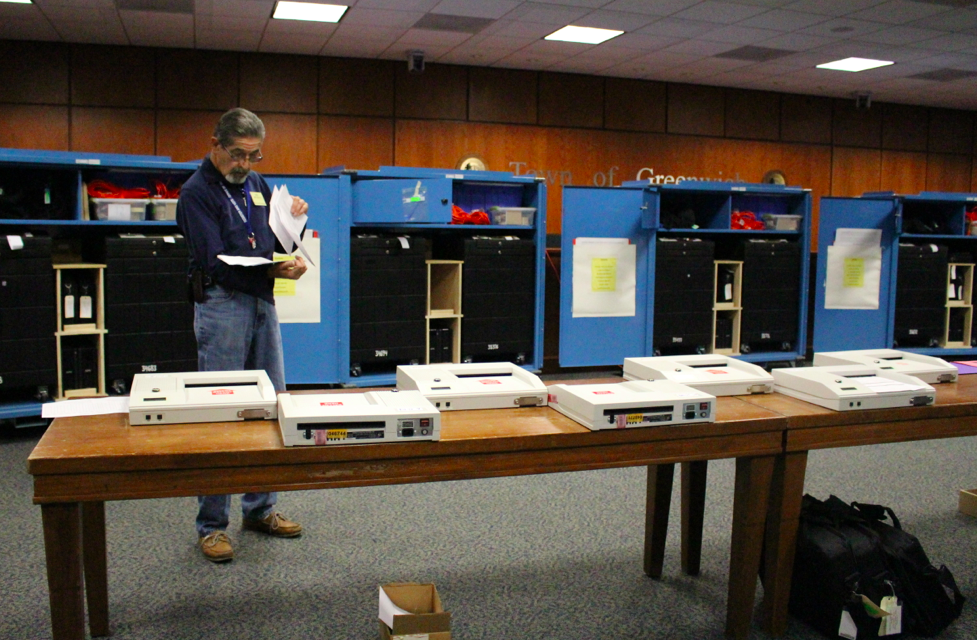 As DeCaro fed test ballots through a machine he was testing, he explained that each machine has a memory card that senses and counts the votes. 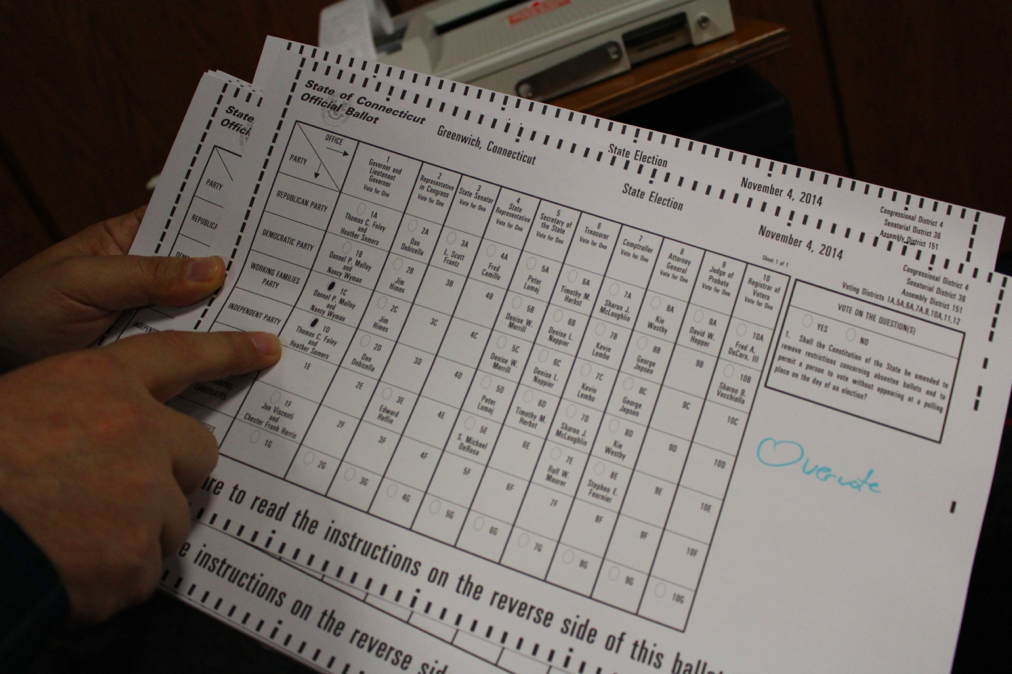 Overvote
The tests involve voting scenarios, including votes for rival candidates. For example, if someone votes for both Foley and Malloy for Governor, that is called “an overvote.”

“It happens all the time,” DeCaro said. “It happens often in the Selectmen’s race because people love both Theis and Marzullo.”

Spoiled Ballot
“So the person standing by the machine, without looking at the ballot, offers the voter a new ballot to replace the ‘spoiled’ ballot,” DeCaro said of the common “overvote” scenario. 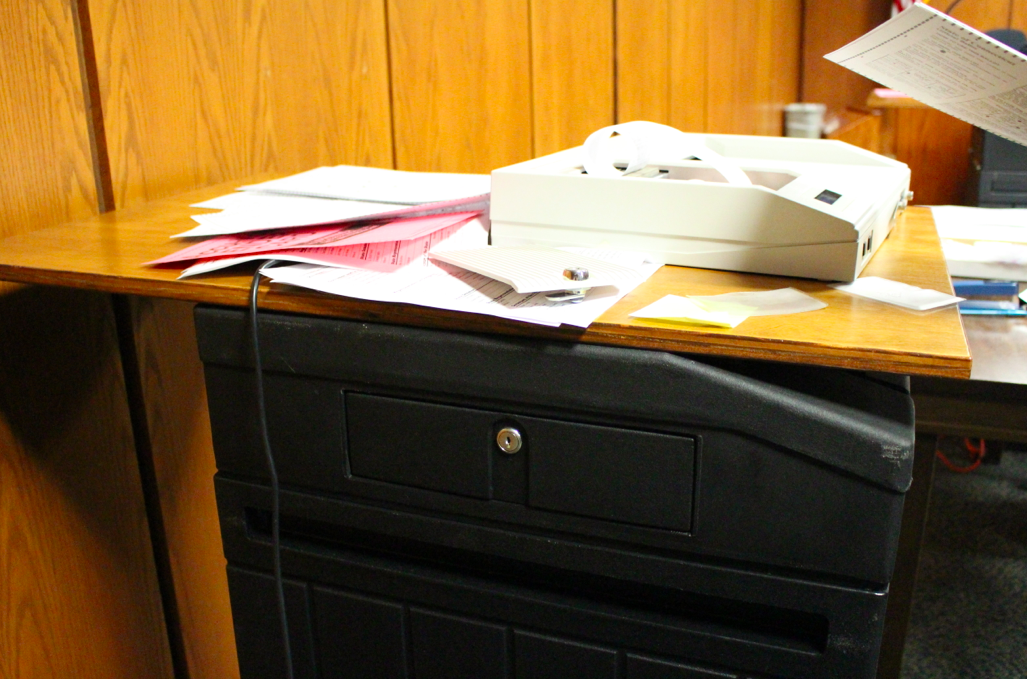 “Side pocket” or “auxiliary bin” of a voting station stores blank ballots (cast in protest) or ballots to be hand-counted if the tabulator machine fails. Credit: Leslie Yager

DeCaro said occasionally voters will choose not to fill out any ovals at all, as if to say that no one is worthy of their vote.

“They feel they are making a statement by leaving it blank — like a protest,” DeCaro said.

And they’re surprised that the machine will also spit the ballot back out. In those instances, the blank ballots are put in the “side pocket” or “auxiliary bin” of the machine to be hand-counted later.

DeCaro said the side pocket is also used to store ballots if there is a mechanical issue.

The sensors and tabulators know where to look for marks on a ballot and know to look only where there is an oval.

If anyone has ever wondered which direction to feed their ballot into the machine, DeCaro said as long as it isn’t fed in sideways, it really doesn’t matter. There is no “upside down.”

“In even-numbered years, the ballot is one-sided, but, the RTM years, when there are also Constables to vote for and so on, the ballot is two-sided,” DeCaro said.

Voting SNAFUs in Greenwich?
Every polling site has two tabulators, with the second serving as a spare. Asked if he could recall any SNAFUs during his six years as registrar, DeCaro smiled.

“We had a machine that started smoking one year, at North Street School. Since then it’s been repaired.” – Fred DeCaro

“We’ve had more oddities happen during primaries, especially important primaries like a Presidential primary, because people may vote a particular way, over and over, but not realize they aren’t registered with a party,” he said, adding that, unfortunately, people occasionally get angry.

DeCaro said this problem decreased since the Greenwich enhanced the voter look-up tool online. Now voters have the ability to look up on the Town website where to vote, whether they’re registered with a party, where their polling place is, and view a map to get there. 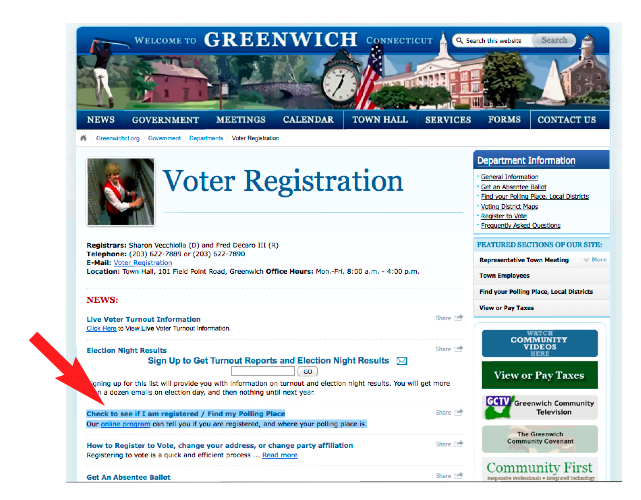 Go to Greenwichct.org/vote it says ‘Find your polling place.’

Reprinting Ballots When a Candidate Drops Out of a Race
DeCaro also mentioned that 8,000 ballots had to be reprinted after Marc Abrams dropped out of the race a a couple weeks ago, which he descried as more of an expense than a hassle.

“It’s almost virtually never too late to reprint a ballot unless it’s three days shy of an election.” He said it’s also possible to print black marks over a name on a batch of ballots if a name is withdrawn. 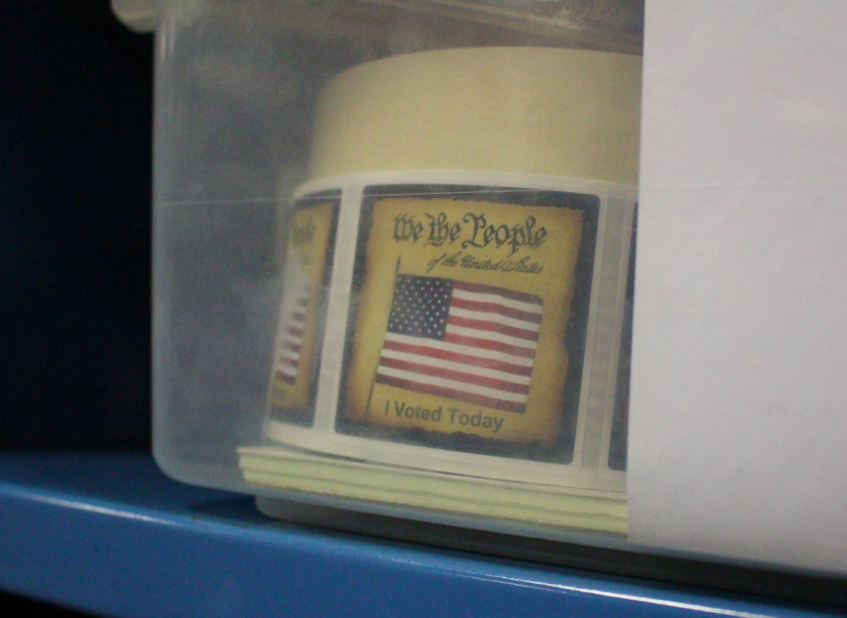 This year voters will receive a new sticker when they vote. Credit: Leslie Yager

New “I Voted” Stickers
“I like a big sticker,” DeCaro said. “It’s like a badge of honor,” he said of the big, parchment colored stickers that read, “We the People of the United States…I Voted Today” and an antique style American flag. 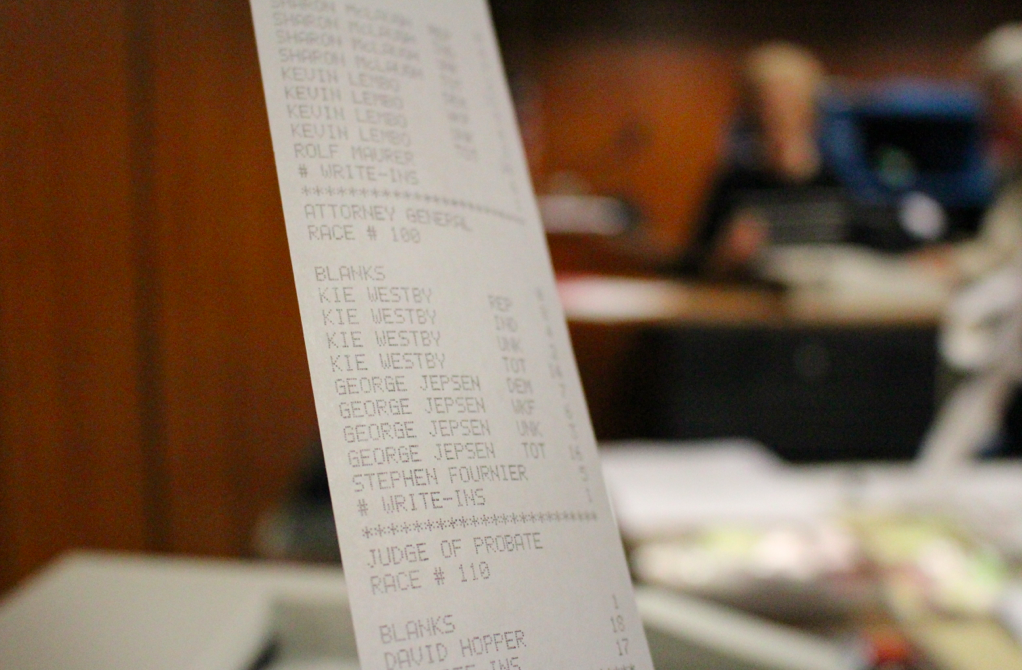 Sample if a printout from a tabulator during a test run at Town Hall on Friday. Credit: Leslie Yager

Disseminating Election Results
At 8:00pm, when the polling stations close, poll workers feed an “Ender Card” into the machine and it prints out the results.

DeCaro said every machine prints out three sets of register tape. One copy is displayed on the wall at the polling place. The tapes show the number of votes per candidate.

Each campaign sends runners to the 12 districts to look at the printout. DeCaro said the runners each make calls into the campaign headquarters to add them to their tallies.

Where do the other two tapes go? One goes to the registrar’s office. The third is kept sealed and locked with the ballots. After 14 days, the tapes may be used if there is an audit.

Who is at the Top of the Ballot and Why?
The reason the Republicans are on the top of the Nov. 4 ballot is interesting. DeCaro explained that, “Even though Dan Malloy got more votes overall, Foley got more votes as a Republican than Malloy got as a Democrat. The Working Family votes pushed Malloy over top. That’s why there was a lawsuit last year and Republicans are on the top even though they didn’t get their Governor candidate.” 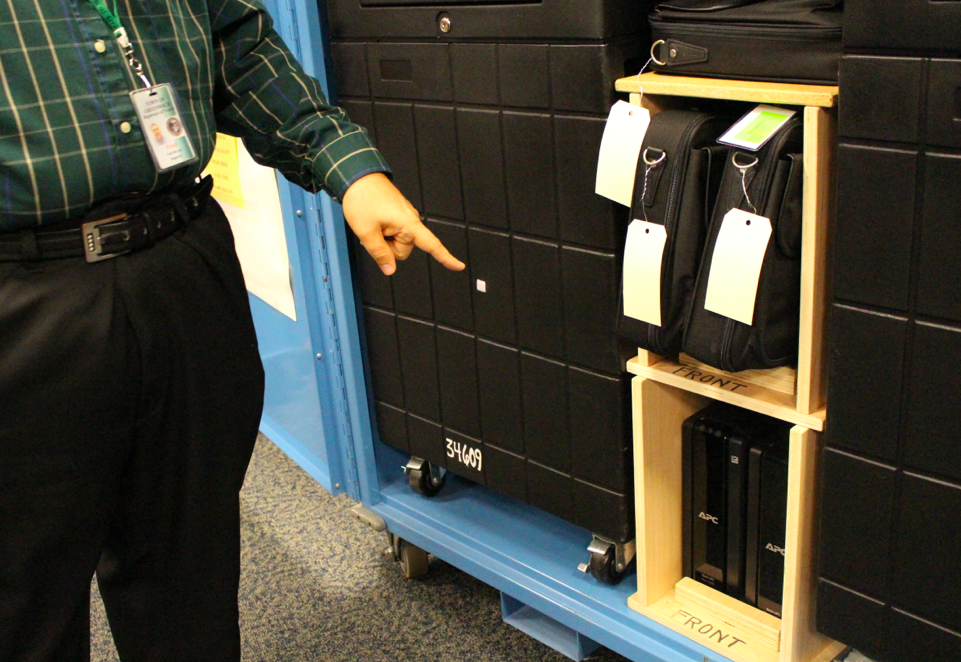 Each of the blue bins destined for a polling station contains voting tabulators, supplies for poll workers, stickers, computers that are used to see how many people voted, and battery backup units.

EDR Election Day Registration at Town Hall
“If someone has never met any of the registration deadlines and is still not registered to vote on election day, they can come to the Cone Room at Town Hall — not the polling place — and register,” DeCaro said. “If, for example someone has just moved to town, they can register on the day of the election. We will call the place where they previously were registered to vote and make sure they are crossed off.”