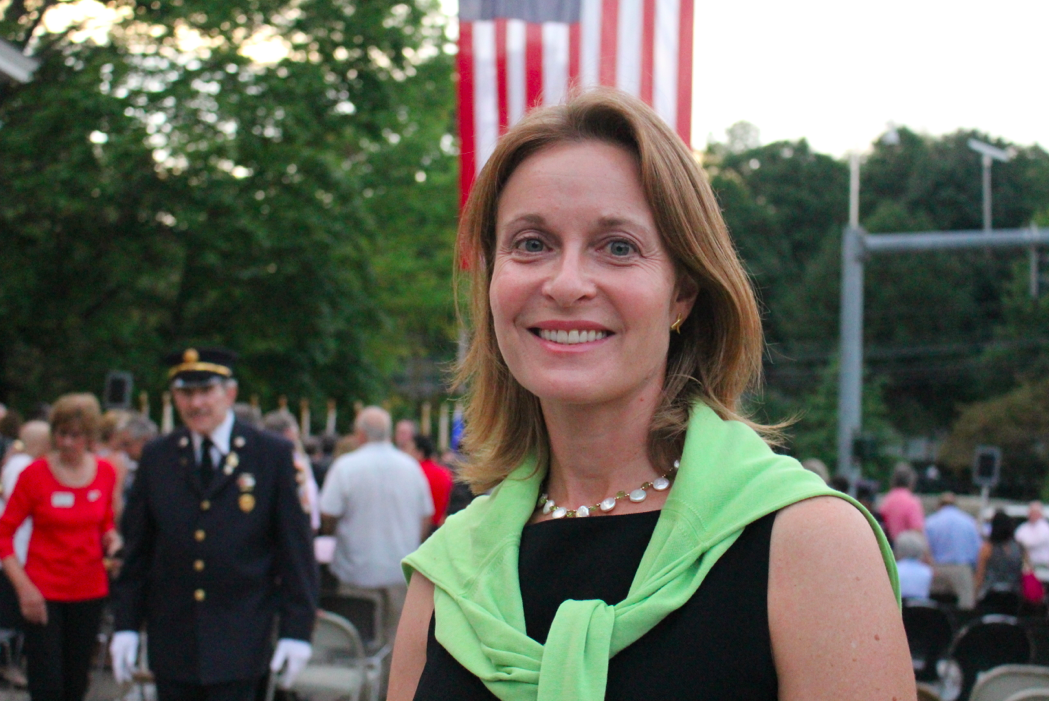 You may have spotted the “Jill” stickers on cars and lapels. Maybe she knocked on your door or introduced herself at Greenwich Point. She is Jill Oberlander and she is running for State Rep., representing 150th district.

Oberlander, who lives in Belle Haven with her family, is an Ivy League graduate – she attended Cornell where she was a Government major – and attorney. She has worked for a large New York law firm, the Metropolitan Transportation Authority (MTA) and the Downtown Alliance, a non-profit that provides research and advocacy to advance the business district that includes lower Manahattan.

For a time, before she married Larry Penn, who co-owns Ellington Financial in Old Greenwich and employs 150 people, Oberlander commuted to Greenwich from New York City.

Making Greenwich her home, Oberlander petitioned her way onto the ballot in a run for RTM in District 2. She served three terms and was a member of the Finance Committee, Labor Contracts Committee, POCD Implementation Committee and the Budget Overview Committee.

The mother of two girls and a boy, age 8, 10 and 12, Oberlander grew up in Westchester, where she attended public schools. She faces Republican candidate Mike Bocchino of Byram for the seat being vacated by Republican Steve Walko, who is not seeking reelection due to a move out of the district. 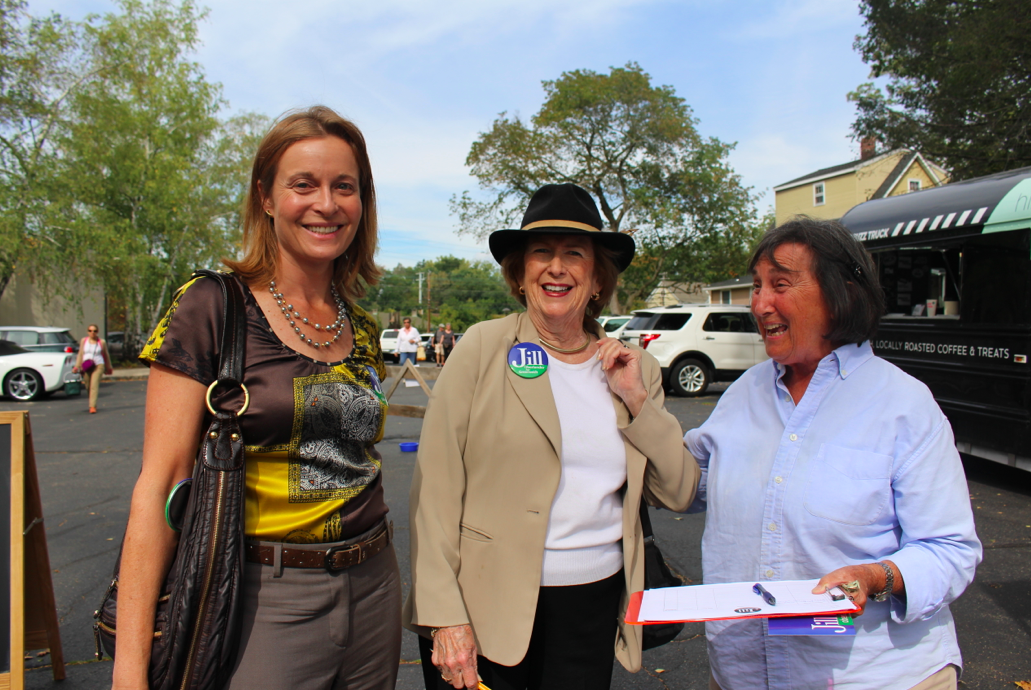 On Wednesday Oberlander introduced herself to customers of the Old Greenwich farmer’s market and fielded a variety of questions. Susan Larkin wanted to know where Oberlander stood on gun legislation.

“I am a strong proponent for keeping the gun laws in place and if possible to strengthen them,” Oberlander replied.

In her first debate with Bocchino, broadcast on Sept. 19 on CT News channel 12, Oberlander agreed with her opponent that a shortage of jobs was a stubborn problem and that improved public transportation might make both Greenwich and the state of Connecticut a more appealing destination for businesses.

“We’re the 4th worst state to do business with,” Bocchino said during the debate. “There is nothing that is attracting businesses to our state right now,” he said, adding that he knows many people who have given up looking for employment. “We’re just not competitive,” he continued. “We’re looked at as one of the worst places  to do business with.”

“We have all these programs out there that unfortunately have no accountability…We have to stop spending monies that don’t effect the quality of life of the people of Connecticut,” Bocchino said, adding that he’d eliminate multiple programs after a two year lifeline.

“I don’t agree with the dire outlook my opponent is painting,” Oberlander said, though she acknowledged that transportation improvements are important for job creation. She said constituents she had spoken to said repeatedly how lucky they feel to live in Town, with its abundant natural resources, charm and volunteers generous with their time.

The debate touched on the high cost of housing in Connecticut and especially Greenwich. Oberlander, who serves on the board of a Westchester nursing home, said it is one of her priorities to see seniors able to “age in place” and that a high quality licensed nursing home is important, especially for elderly who don’t have family to look after them.

“I find it amusing that my opponent says that, since she voted against our Nathaniel Witherell expansion,” Bocchino said.  “…We have a beautiful rehabilitation center that was just opened. I was there, fully supportive of it. I don’t want to get into the nitty-gritty of it, but it’s just amazing to me.”

“You did not check your facts,” Oberlander objected. “…Before you say on air that I voted against it, especially in an area where I have a lot of experience and concern, I would expect that you check your facts.” 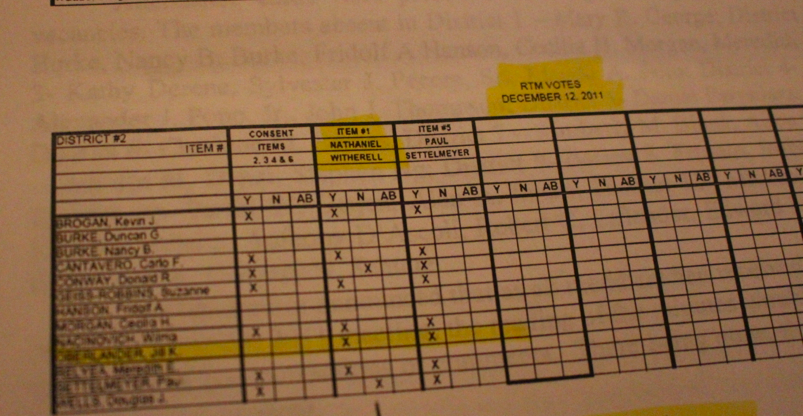 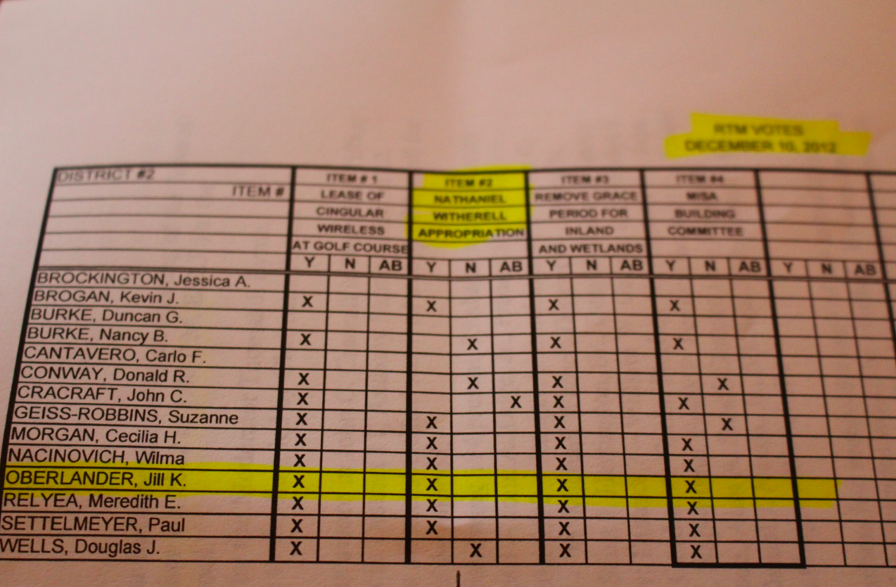 On the topic of public education, Oberlander, who attended public school and whose mother was a public school teacher in the Bronx said, “I will be a tireless advocate for bringing resources to Greenwich.” Though her own children attend local private schools, Oberlander said that the formula for funding from the state results in Greenwich not getting its fair share.

She said the formula had been subjected to ‘legislative adjustment’ at Greenwich’s expense.

“People have a perception of Greenwich that is not entirely accurate,” she said during the Sept. 19 debate. She pointed out that 14% percent of children in Town qualify for free or reduced lunch and told Greenwich Free Press that she views public education, including vocational and technical schools, as well as state university system as providing a pathway for opportunity.

Bocchino said as 3-year PTA president at New Lebanon School he has learned the ins and outs of the school system.

Oberlander described herself as driven to give back, and that the election is not about party affiliation, but rather about sending the best advocate for Greenwich to Hartford. She said her parents had instilled in her a sense of compassion for others, as well as a strong work ethic.

Oberlander and Bocchino will debate two more times. On Oct 6th the League of Women Voters is hosting a debate in the Town Hall meeting room.

On October 15, the Old Greenwich Association will host a third debate.