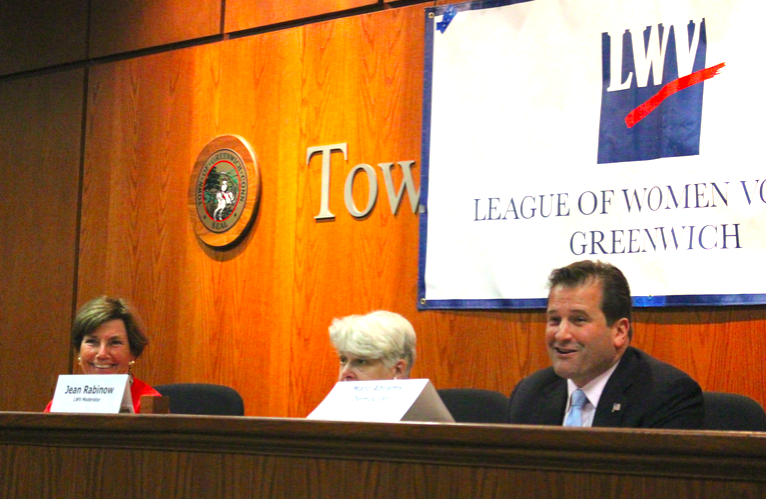 The League of Women Voters of Greenwich, who was sponsor of the debate, distributed index cards for residents to submit anonymous questions for the candidates to respond to.

Gun Safety
The first questions of the night addressed gun control legislation in Connecticut. “I would be against any kind of change to gun laws,” Abrams said. “I’d love to achieve an F-minus from the NRA.”

Floren said she would not vote to weaken Connecticut’s gun control laws. “We spent hours, days, months working on a bi-partisan gun safety law that did not abridge anyone’s second amendment rights,” she said. “Are we going to do more this coming session? No. We failed in not addressing the issue of mental health,” she said, adding that she expects that will be the thrust of the upcoming session.

Voter Laws
Asked about expanding voting opportunities, Abrams, who said he attended NYU law school and had studied voter suppression laws, said, “My opponent introduced a law that required people to show proof of citizenship and government ID,” which, he said would result in voters having to bring a passport to the voting booth.

Floren said she had served on the Government Administration and Elections committee.  “All the bill said was that you would show a photo ID. It could be a driver’s license, a passport or government issued ID. You need it to get in the court house, to sign into a hotel, as a senior to get in the movies…It helps the sanctity of the vote. That people checking you in know you are who you say,” she said.

Floren added the law requiring a photo ID was struck down by the courts anyway. “So it’s a moot point,” she said.

Minimum Wage
On the topic of a proposed federal minimum wage of $10.10 an hour, Floren said, “We need better than minimum wage,” adding that that was why she worked so hard to re- open Wright Tech. “It’s the gold standard of technical high schools, right here in Stamford,” she said.

Abrams, who described himself as someone who started a business in a studio apartment with a laptop that turned into a billion dollar company, said he would have voted in favor of raising the minimum wage to $10.10.

“But my opponent voted against that. I would never invest in a business that needs to have their employees go on government assistance in order to make a profit,” he said, referring specifically to Walmart. “If you walk into Walmart, when they hire you they give you instructions on how to apply for social services… We are subsidizing corporations,” he said. 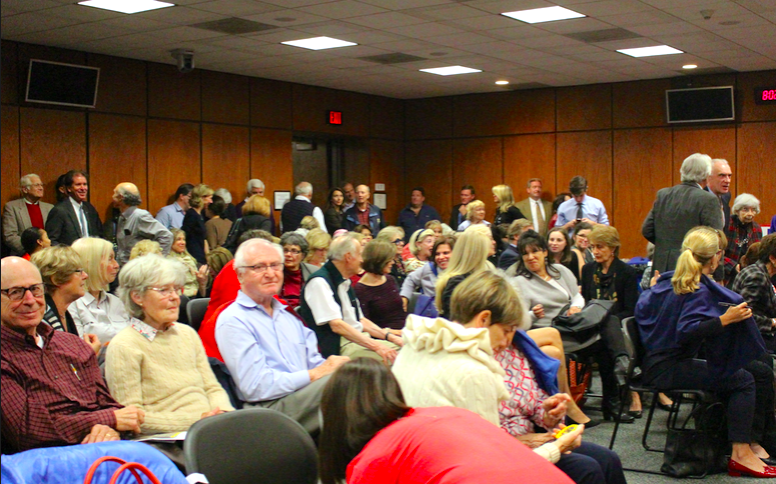 Traffic on I-95
Candidates were asked for remedies to  alleviate the traffic on I95 and, specifically, whether they support a proposal for border tolls. Both agreed that tolls were a bad idea and that commercial traffic should be diverted from I95.

Energy Prices
On the topic of rising energy prices, Floren said, “We have to make better use of natural gas and look at renewables, look into smart metering and improving the grid. “Our electric distribution system is falling apart,” she said.

Abrams said having a comprehensive energy policy is key to expanding an economy. “Right now, CL & P has asked to increase their base rates,” he said, which he described as absurd. “I’d follow Senator Blumenthal’s lead in capping those rates and rolling them back. They are a public utility, but they are a monopoly.”

Floren said she was on record as being against the rate increase for CL&P and agreed that a plan was needed.

Teachers’ Pensions
On the subject of funding teacher’s pensions, Abrams said it was “bad math” or a “red herring,” to change the system to cover up a mistake of letting public employee pension funds to go unfunded. “Why haven’t we been funding it to an appropriate level?”

“I don’t know if it’s a red herring, but it’s certainly an anchove,” Floren joked. “The legislature has been absolutely guilty in not fully funding the pension fund. A lot of it was we thought the market could make up the difference…We promised those teachers those pensions. And promises made, should be promises kept.

Marriage Equality
Mrs. Floren and Mr. Abrams were asked that how they would vote if Mr. Foley became Governor of Connecticut and tried to overturn marriage equality?

State Rep Floren said she wold not vote to overturn marriage equality. “We had voted for civil unions and I had supported that… Times changed, I’ve changed. society’s changed,” she said.

“My opponent voted against same sex marriage, so that she now supports it is great, but I’d like to know why she didn’t support it to begin with,” Mr. Abrams said. “It’s a basic civil right. I started off thinking we had good moderate representatives here in Greenwich, but was surprised,” he added, saying ‘We’ve been on the wrong side of history.”

Pesticides and Senate Bill 443
Asked about their environmental priorities, Mr. Abrams brought up Senate Bill 443. “I have a 2 year old son. I survived cancer. I want to know what pesticides are put on our schools playgrounds,” he said.

“None,” Mrs. Floren replied. “It was my bill.” She said the ban on pesticides in daycare through middle school had been the result of her initiation. “I got it passed years ago,” she said. “This time, it was Senate Bill 443, the Monsanto Bill,” she continued. “It came in at the 11th hour with no public hearing and they put it on my pesticide bill that was expanding our ban on no pesticides to high school…so I had to vote against my very own bill,” she said, adding that she believes that GMOs should be labeled.

Abrams, in his closing remarks described himself as neither a liberal, nor a conservative, but “a free market realist.” He said that as a successful businessman, he views government as having a role in fostering economic growth, protecting quality of life, maintaining a clean and safe environment and helping the most vulnerable residents.

Floren, the incumbent state rep, had the last word, and started out by saying that the 149th district has been her family home for 42 years.

“Working in a bi-partisan manner, I have produced some good results,” she said, listing her successes as fiscal accountability, job creation, elimination of unfunded mandates, preservation of open space, transportation improvements, and strong ethics, campaign finance and contracting laws. She said her experience made her the trusted voice in Hartford to work for common sense government.

“I know the people. And I know how to get things done,” Floren said.