On Monday night State Rep Livvy Floren moderated a panel discussion on the topic of youth vaping and the impacts on health including death.

The event was at the Boys & Girls Club of Greenwich where director Bobby Walker said there is a Be Smart, Don’t Start program.

Mr. Walker relayed a conversation he’d had with an 8th grader who said she knew 14 kids at school who vape, and that in her neighborhood there are more, including an 8-year-old boy.

School Resource Officer Fred Reisch said that at Greenwich High School he is not only a law enforcement officer, but also a teacher and counselor.

“The last thing we want to do as SROs is arrest students,” he said, adding that there are programs in place for students who make a mistake.

Typically, an administrator will seize the vape from a student and it is tested immediately.

If the vape contains nicotine, the school typically handles the situation, and the students faces consequences.

If it becomes a recurring issue, police get involved and they may issue a ticket about about $90.

If the vape contains marijuana, and it’s the first time, the student may be referred to the Juvenile Review Board (JRB) which is a court diversionary program. As a result, the teen winds up with drug testing and/or community service in the hope of getting the student back on the right track.

“You can’t just smoke a cigarette really quickly in the student center. Everyone would find out. With vaping they could be in class, and the teacher turns around and the student uses the vape and the teacher never finds out,” he said, adding that students know cigarettes are bad for their health.

He said parents should educate themselves, and for example, be suspicious if their child has numerous USB drives because they might just be vape devices.

Dr. Paul Sygall said the long term medical consequences of vaping are still unknown but over 1,600 people have been directly linked with lung related illness and injuries, and of those, 34 have died.

“We don’t know the domino effects: the reproductive, hormonal or endocrinal effects,” he said. “These devices weren’t mainstream in US until 2004.”

He said vaping is undetectable and easily accessible. They can be purchased in stores that don’t comply with the 21+ age requirement, and they can be ordered off the internet.

Dr. Sygall said while many smokers have used vape devices to quit traditional cigarettes, according to one study in the New England Journal of Medicine, over 80% were still using the vaing devices after a year, versus people who quit with products like a patch, gum or Chantix. “Only 9% of them are still using nicotine products after a year,” he said.

Bludnicki said he works with teens at GHS to chronicle their activities including athletics, homework, sleep and vape use. “Inevitibly when we look at it together they say, ‘I didn’t realize I was vaping so much.'”

“We’ve seen some students going from experimental Juul to a pod a day, which is a pack a day of nicotine,” he said.

Bludnicki said students may be dismissive of side effects including a little cough or congestion, whichare signs of withdrawal.

He said they are also dismissive of withdrawal and overdose symptoms, including nausea, stomach aches or headaches.

“One boy had four bouts of nausea in one day. He said he had vaped before school, had breakfast, threw up, vaped again, and threw up and it happened two more times,” Bludnicki said. “I said you realize it’s vaping that’s causing the problem. He said his friends laughed and thought it was funny. Even when they are overdosing on nicotine, they’re not looking at it seriously.” 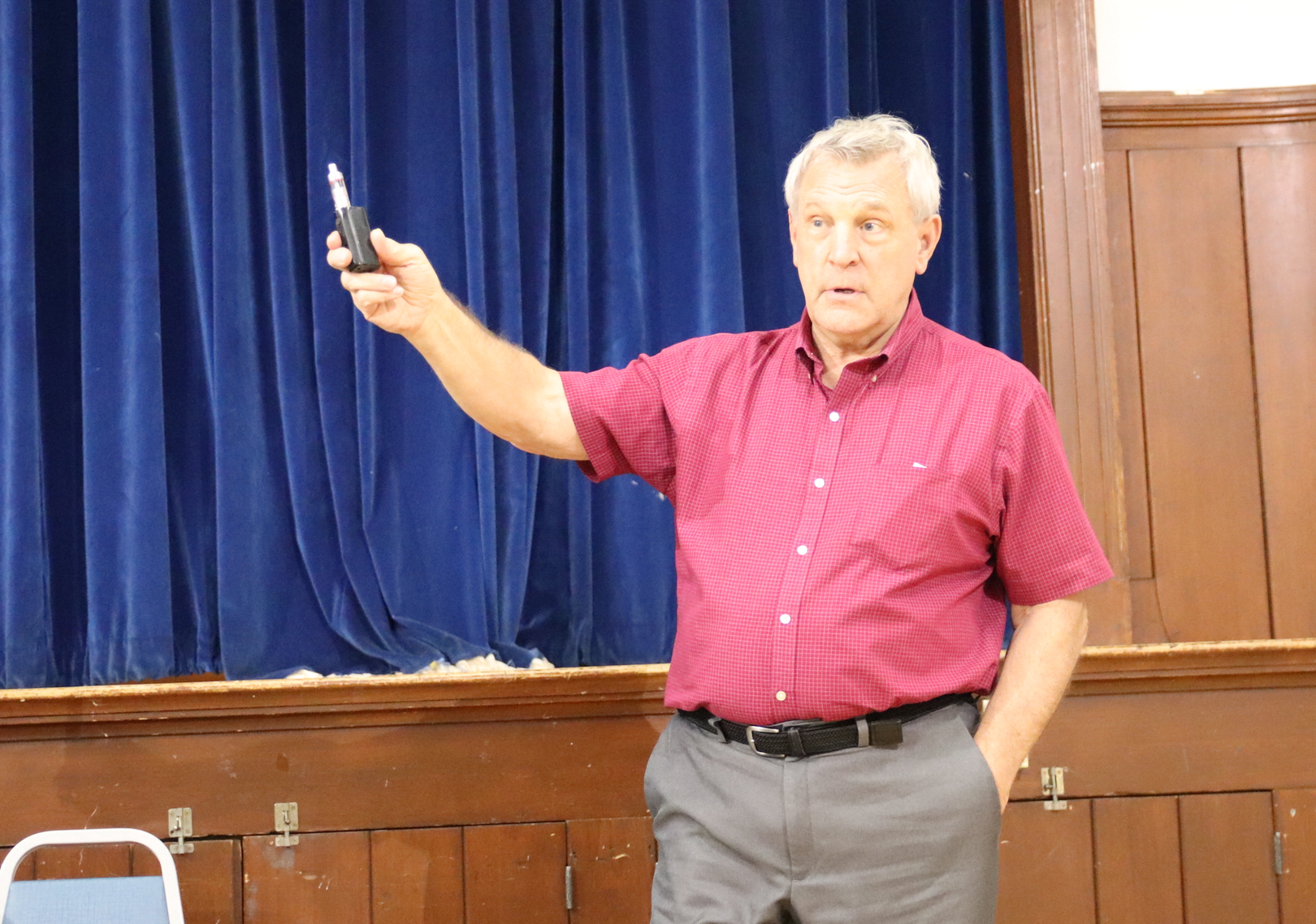 Dennis Bludnicki a device called a “Mod” is becoming popular. He said they are perceived to be more sophisticated and result in a bigger vape cloud. Photo: Leslie Yager

Bludnicki, who has been stationed inside Greenwich High School for six years on behalf of Liberation Programs, said he tries to help students understand that addiction to vaping is a brain disease.

He said he visits middle schools where about half of students say they know someone who vapes, and another half of those who say their friend has developed a problem.

At GHS, in terms of detection there are vape detectors in some bathrooms. Officer Reisch said sometimes they set off an alarm and students get caught.

But, he said students are smart, and have learned to vape where there are no detectors.

He said the drug sniffing dogs do not detect nicotine or Juuls, they do detect THC.

Lauren Rabin said teens are under stress and suggested some kids turn to vaping to reduce stress.

Dr. Sygall said the best stress reliever is exercise. “Put on those ear pods, go for a walk and clear your head,” he said.

Mr. Bludnicki said at first teens say vaping helps relax them and make them able to focus. But, he said, as time goes on and they vape more, it takes on the opposite effect, making them anxious, have headaches, stomach aches and nausea.

“The very thing that they think is helping them turns against them,” he said.

State Rep Steve Meskers said the other side of the equation is regulation, and that last year Altria bought 35% of Juul for $13 million.

“They didn’t spend that money because they weren’t expecting they’d be able to push this out as a safe product,” he said.

“Why is this so easily available on the internet, on Amazon. If it’s a smoking cessation program, how is it ending up in the hands of non smokers who are getting addicted. It’s a regulatory question,” he said. 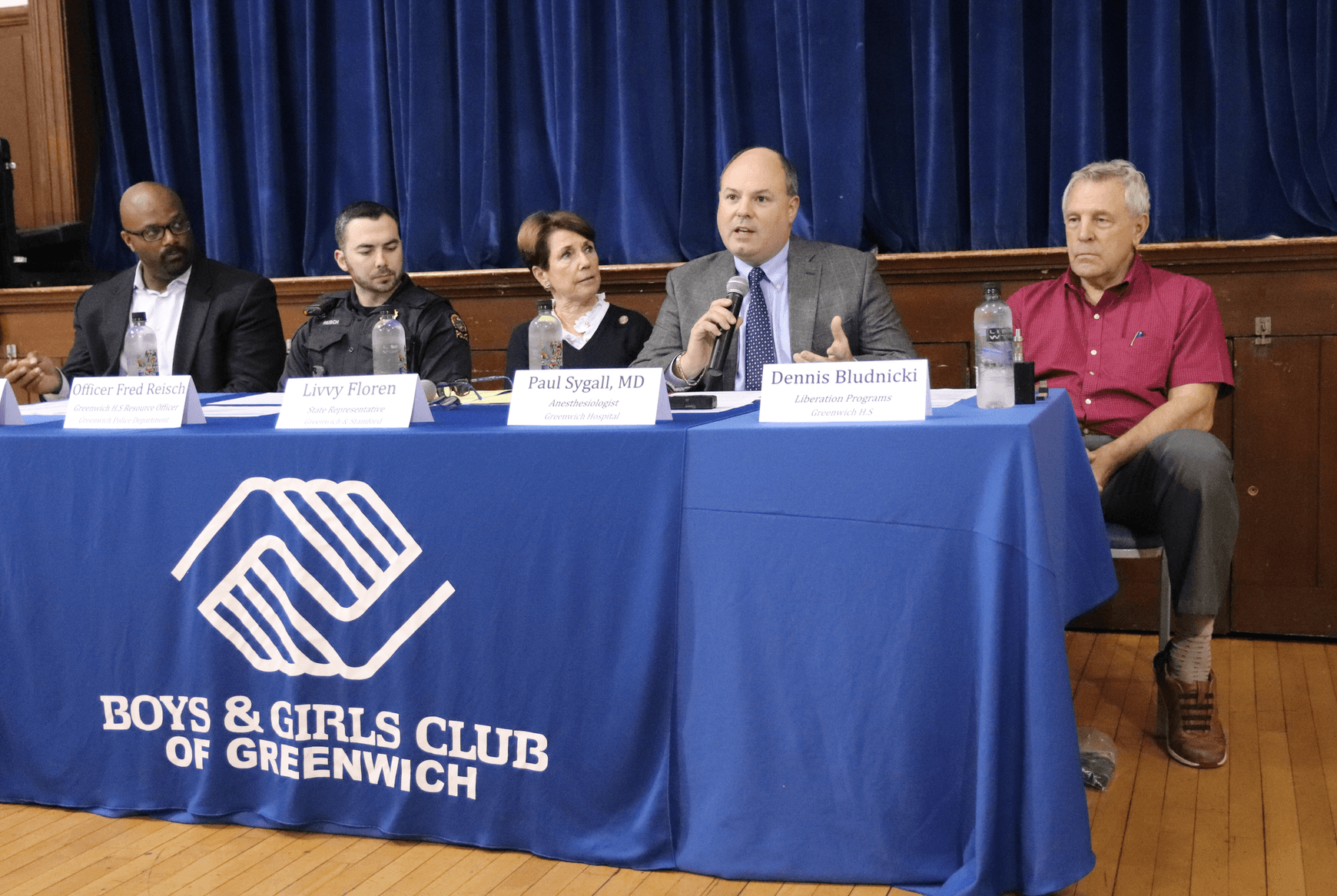