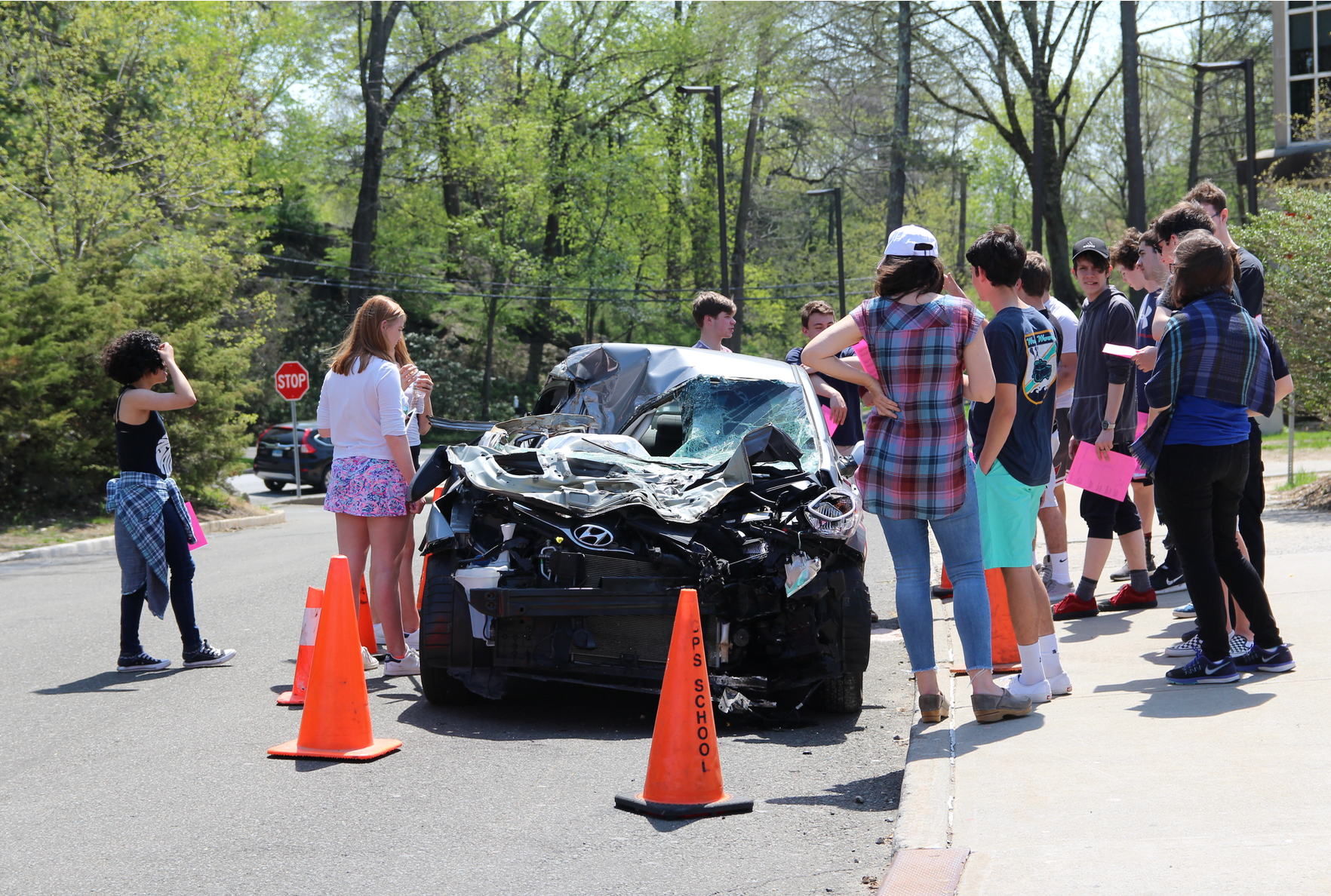 Safe Driving Day at Greenwich High School on Thursday featured interactive stations as well as a crashed car. A popular demonstration was “The Convincer,” where students sat in a makeshift car seat with a seat belt on and slide down a track that simulates a crash at 5 miles per hour. 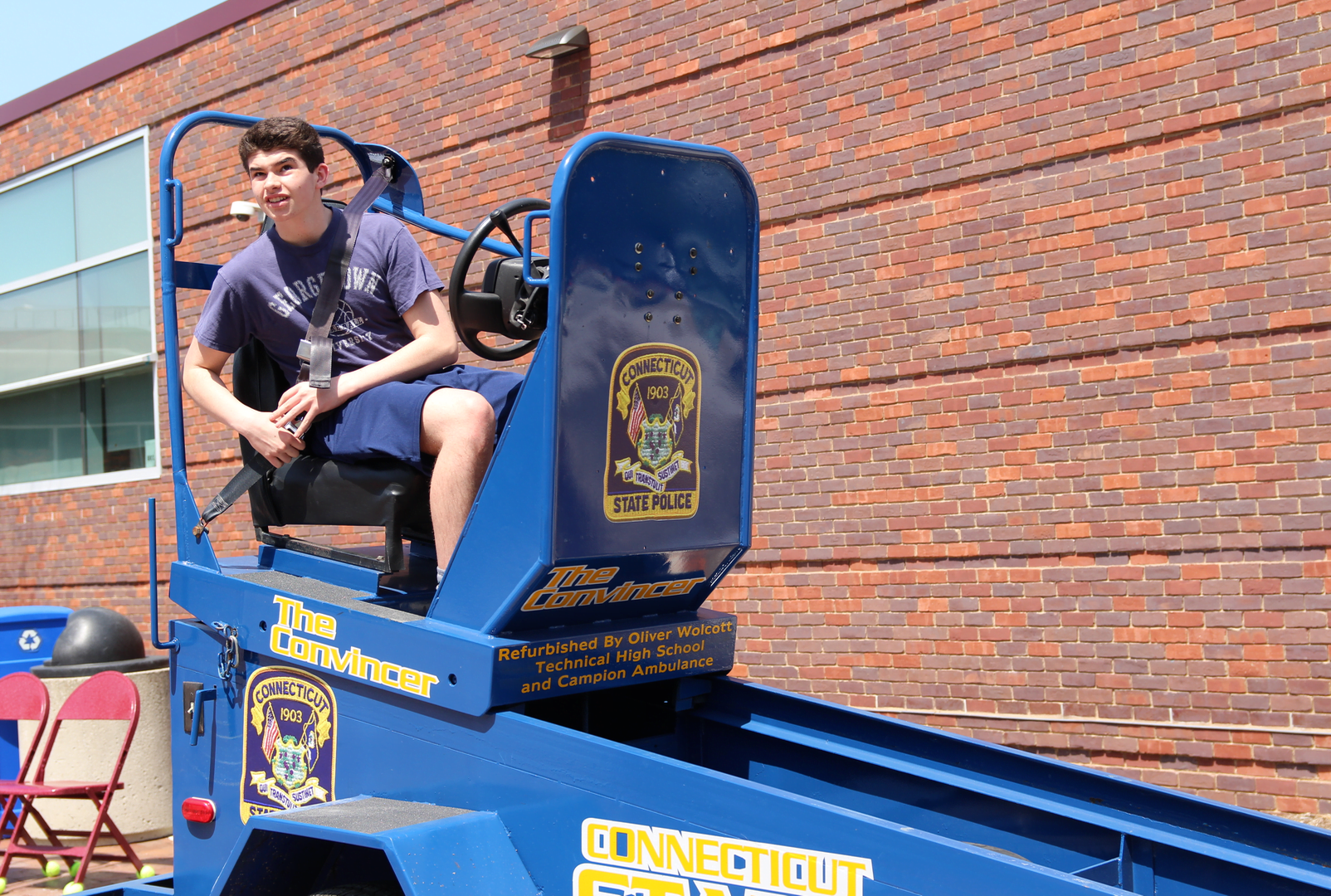 State Police Sergeant Andy Matthews said the Convincer is aptly named. The apparatus, which simulates a crash at 5 miles per hour, is brought around the state, mostly to high schools.

“There is an epidemic in Connecticut with the loss of teenagers in motor vehicle crashes. The laws have been changing and there is movement to continue to tighten them,” he said. “Kids aren’t wearing their seat belts in the back seats.”

Sergeant Matthews said a lot of teens are unaware it is the law that passengers in the back seat wear their seat belts up to the age of 17.

“An inexperienced operator are the ones crashing, and the kids in the back are the victims who are injured or have a fatality,” Matthews said.

“You get ejected through the window or you get a traumatic brain in jury,” he continued. “If you’re not dead, you’re in a wheelchair the rest of your life. If you get a brain injury it changes you for life.”

Matthews said that in a classroom setting, students feel they’re being lectured, and have a short attention span. But, he said, with the Convincer, they don’t have to use their imagination.

Throughout the event, there was a line for students to try the Convincer, and invariably, the nervous laughter was tempered by the shock of the impact of a 5 mph crash.

Over by the GEMS ambulance, members of the GEMS Explorer Post club explained what newcomers could expect if they join.

“We’re the first responders on scene. We’re the ones who size up the scene and give the vitals to the hospital,” said Halla Clausi. “It’s the first step. Then we relay to the hospital the severity and what happened.”

Jack Childs, a junior at GHS who is president of the GEMS Explorer Post, also volunteers as an EMT on the ambulance. Jack, who got his certification as an EMT last winter said he hopes when he’s finished school to do pursue work in emergency services.

“We get dispatched to the scene and begin treatment – either the road or at a house or wherever the incident is,” he said. “We put the person into the ambulance and do treatment on the way. From there we do a “patch” so whatever hospital we radio ahead can be prepared – whether the person had a stroke or severe trauma, for example.” 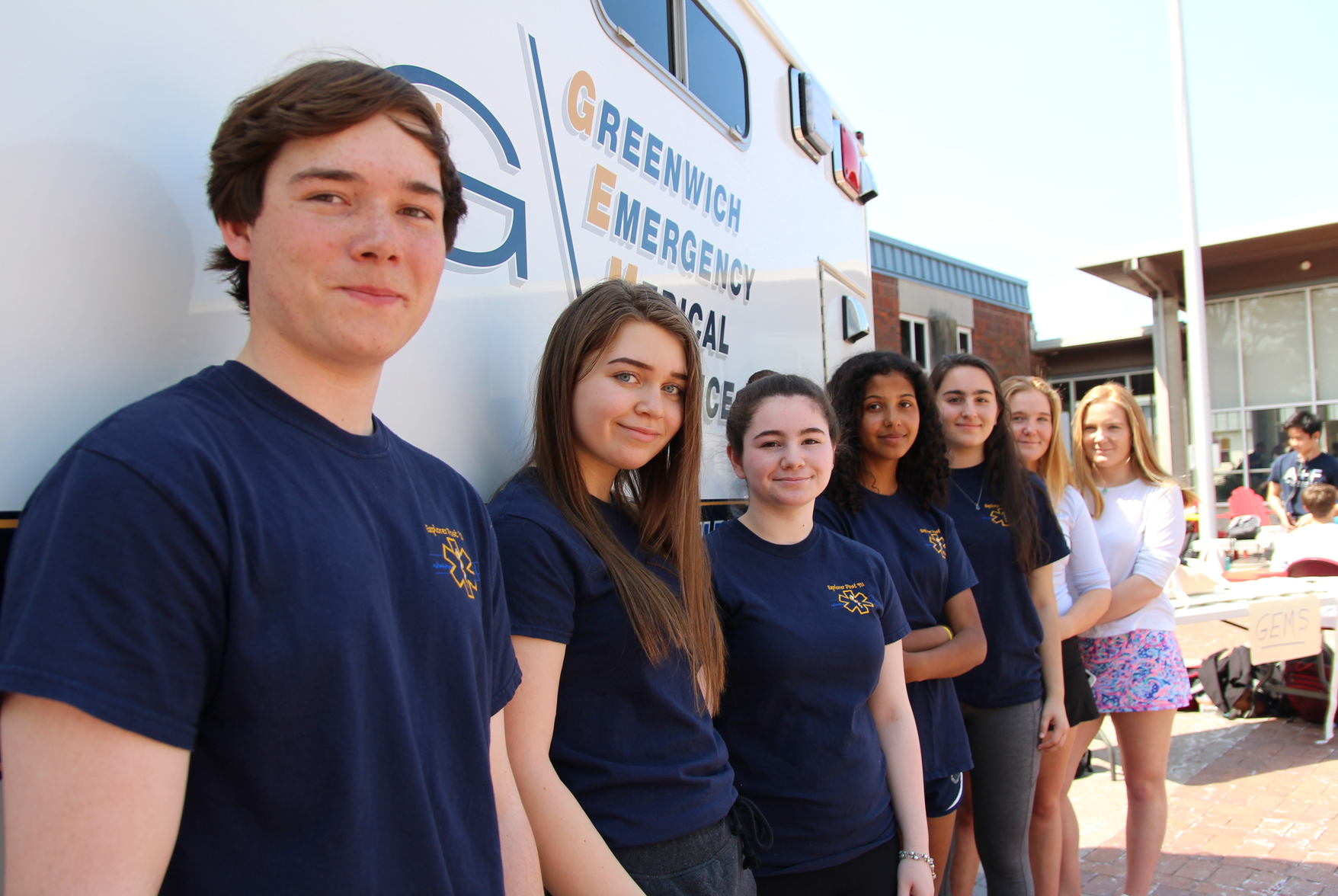 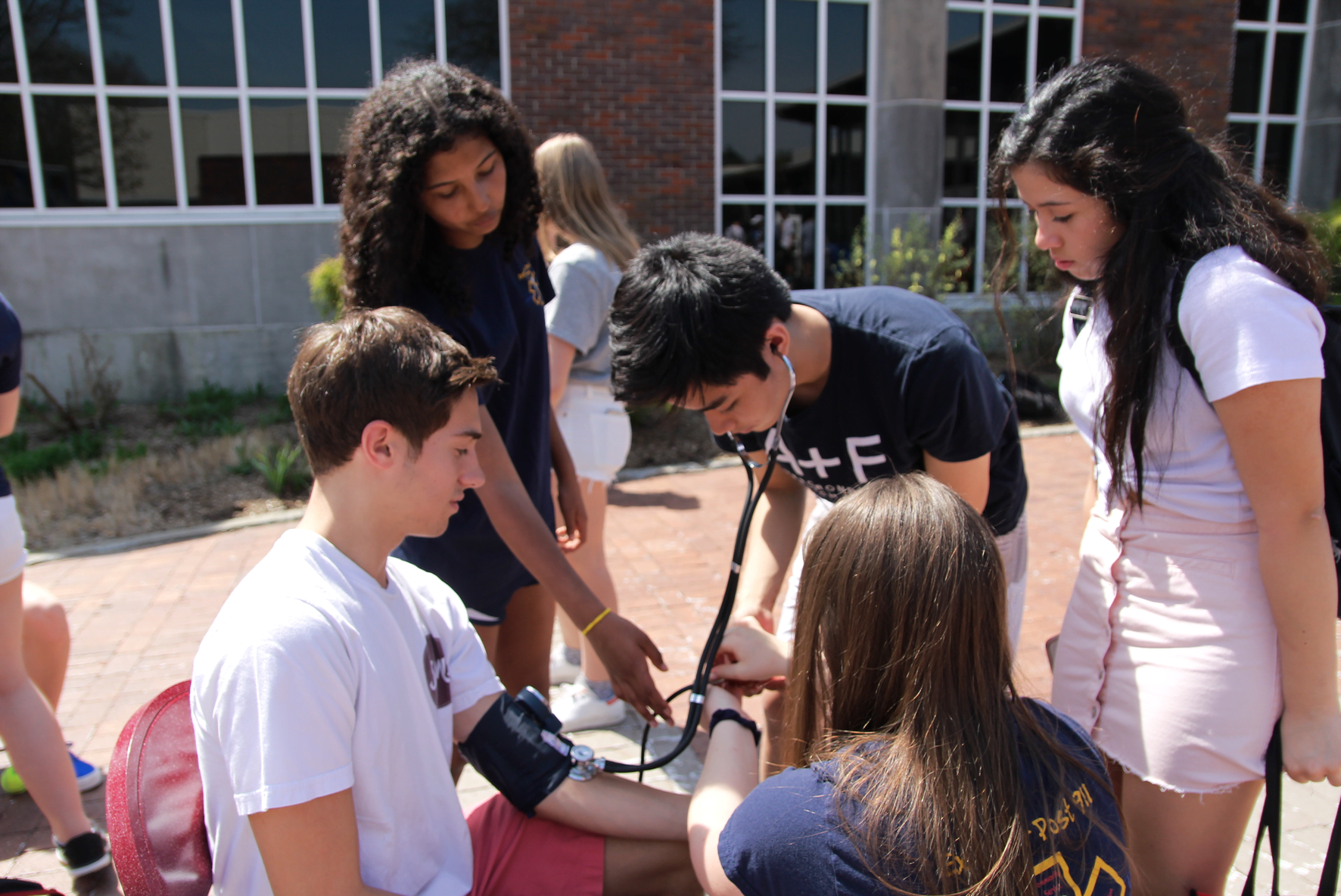 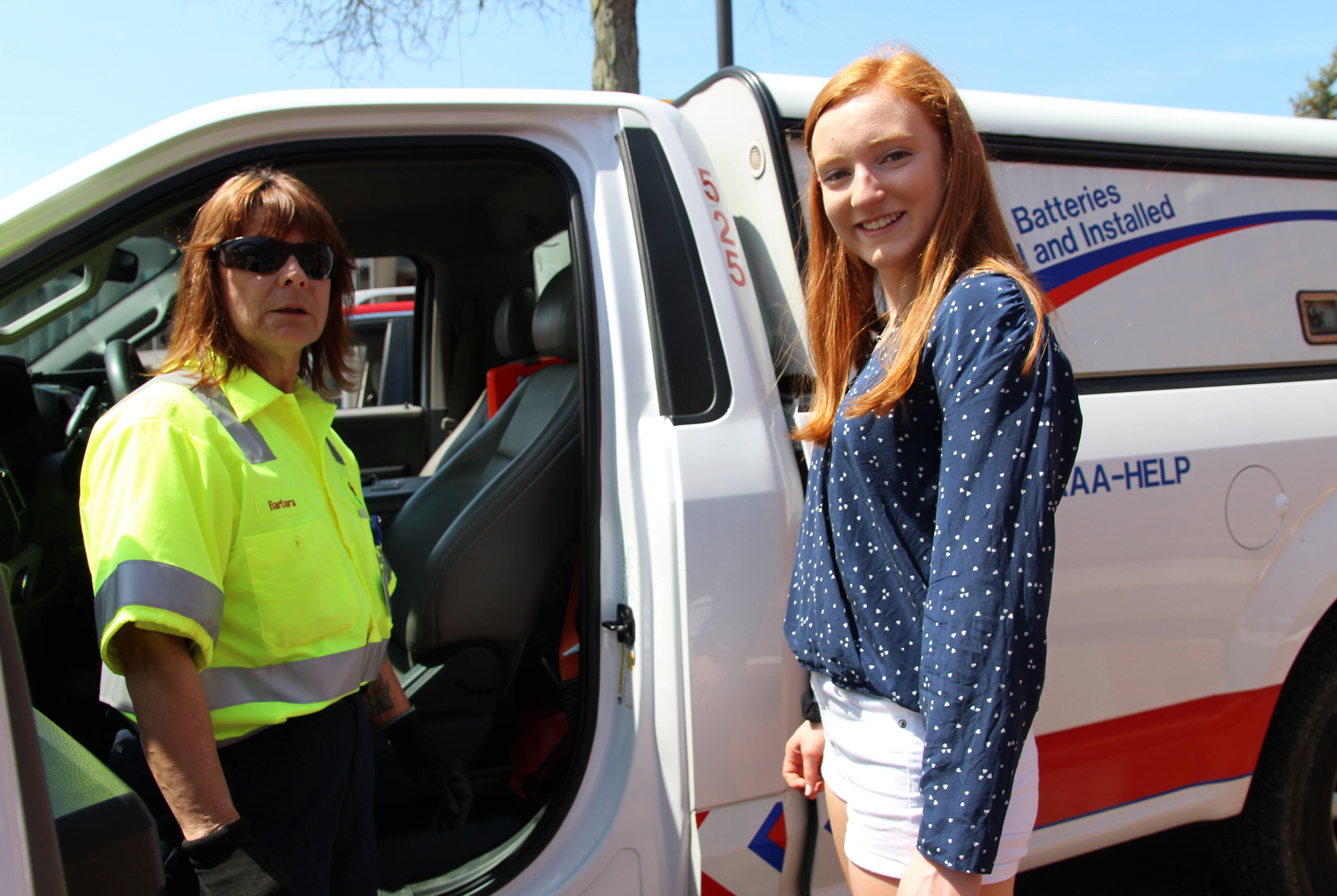 GHS junior Bea Edmonds who organized the May 3 distracted driving event at GHS for her Girl Scout Gold Award, with a representative from AAA, who gave students some instruction on basics including putting air in a tire and checking its pressure. May 3 2018 Photo: Leslie Yager

GHS Junior Bea Edmonds, who organized the event in order to earn her Girl Scout Gold award, sought not only to raise awareness about the dangers of distracted driving, but to weave in a new component to the annual event –basic car mechanics.

“In most schools they address distracted driving, but not maintenance,” Bea said. “If the check engine light comes on, kids don’t know what to do.” 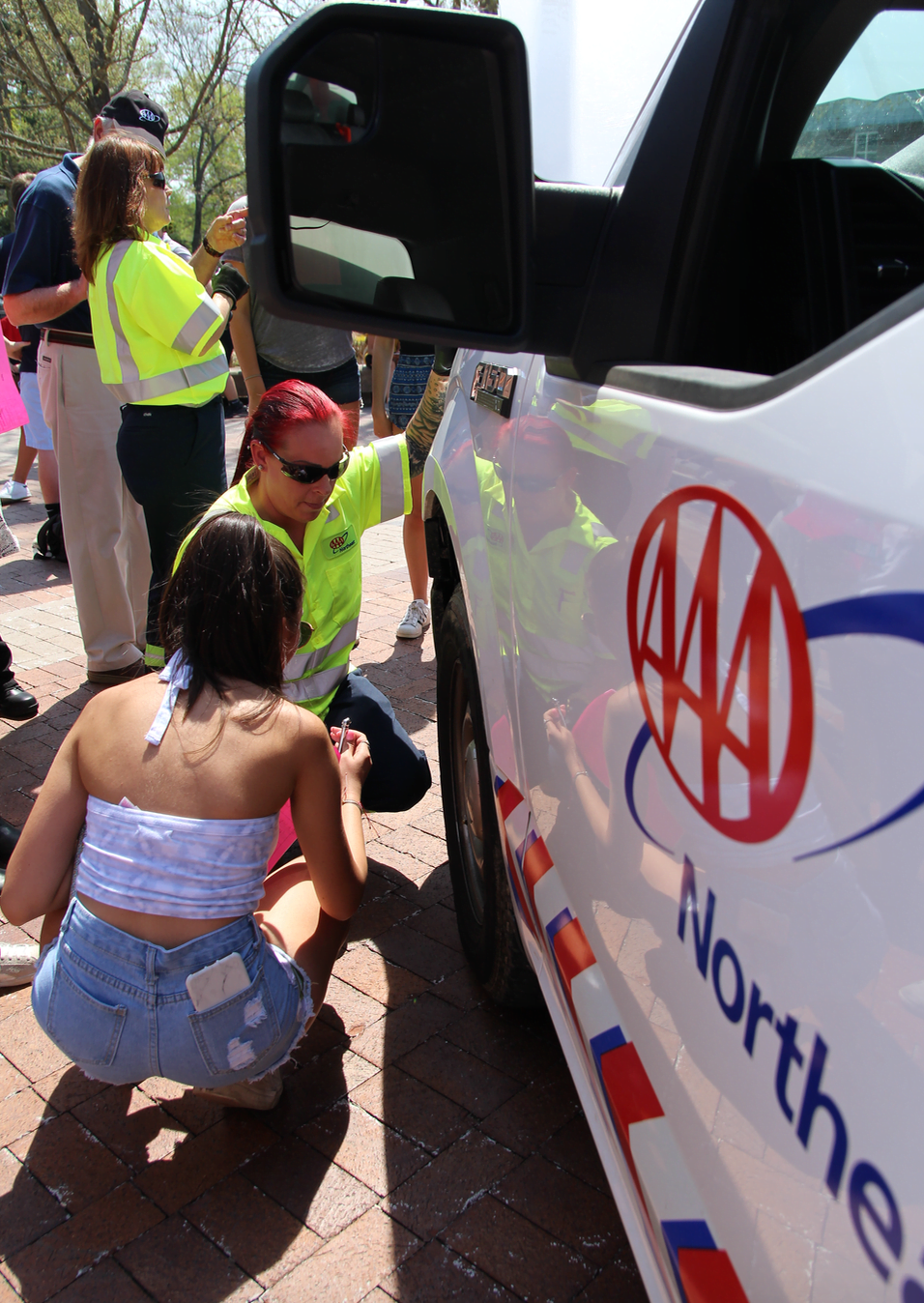 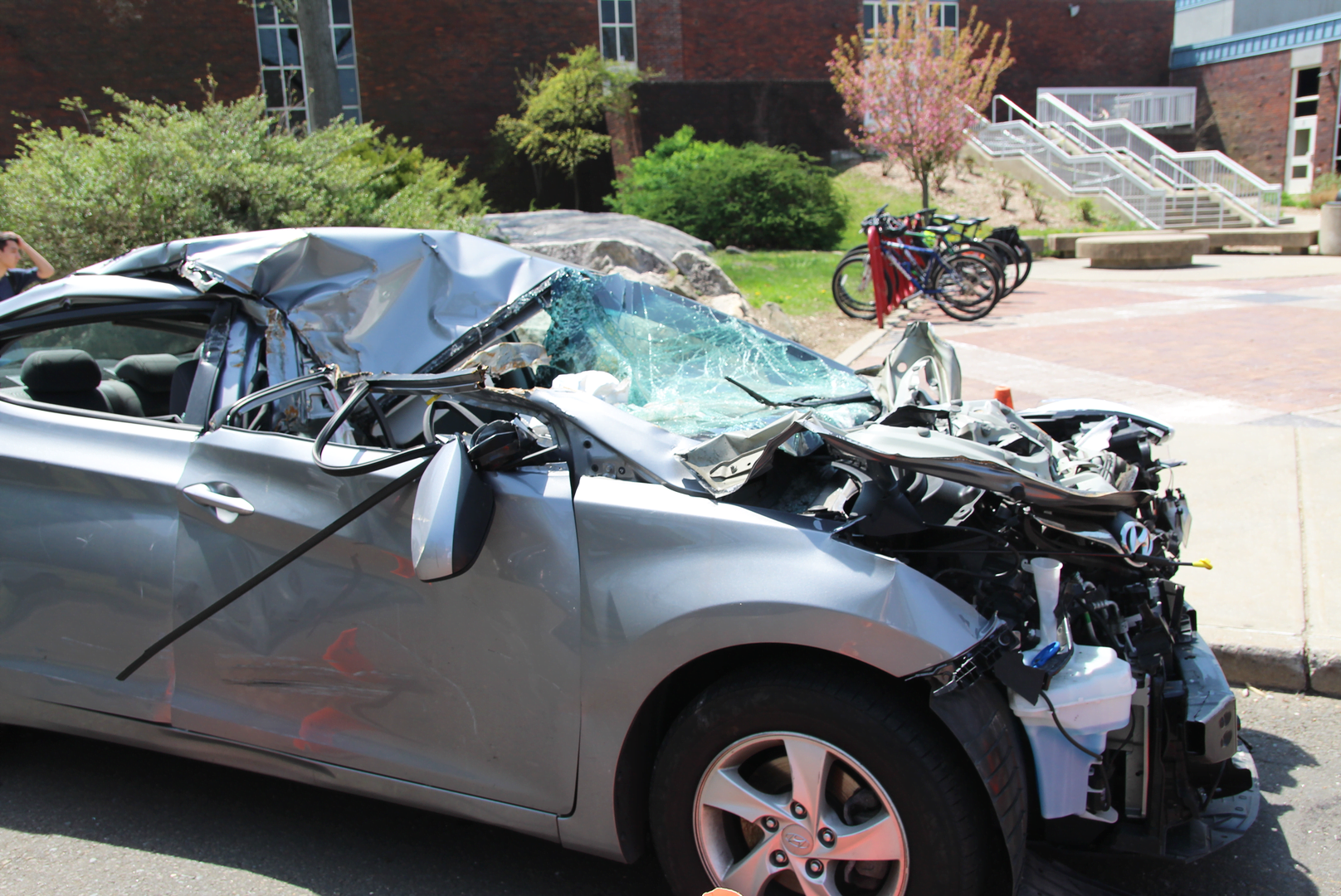 A crashed car in the bus circle at Greenwich High School during Safe Driving Day. May 3, 2018 Photo: Leslie Yager 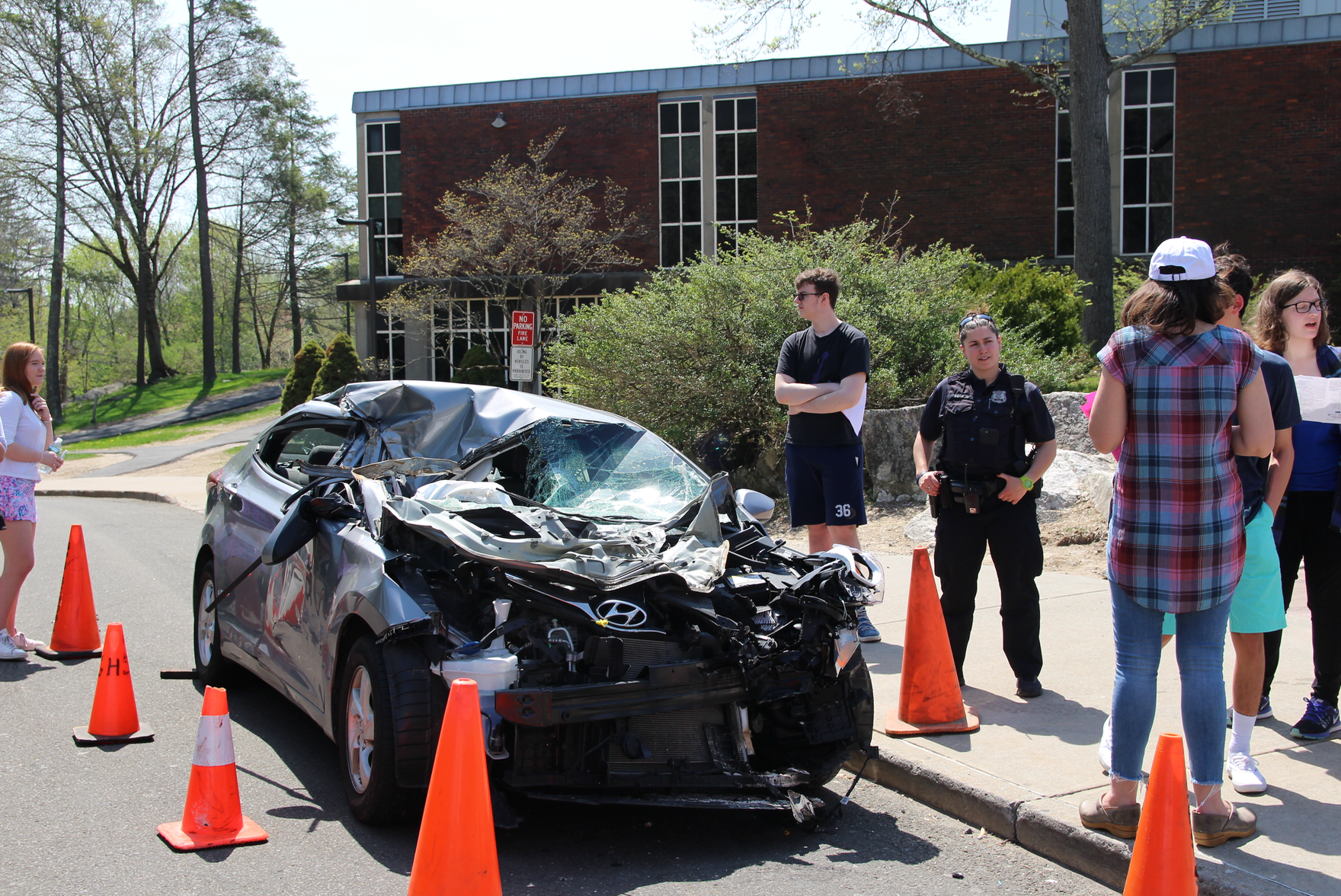 Officer Hayes Sgaglia, who will replace SRO Carlos Franco at the end of this school year said the presence of a crashed car was powerful.

“It’s a good eye opener and hopefully they’ll learn from what they’re seeing and make smart decisions,” she said. 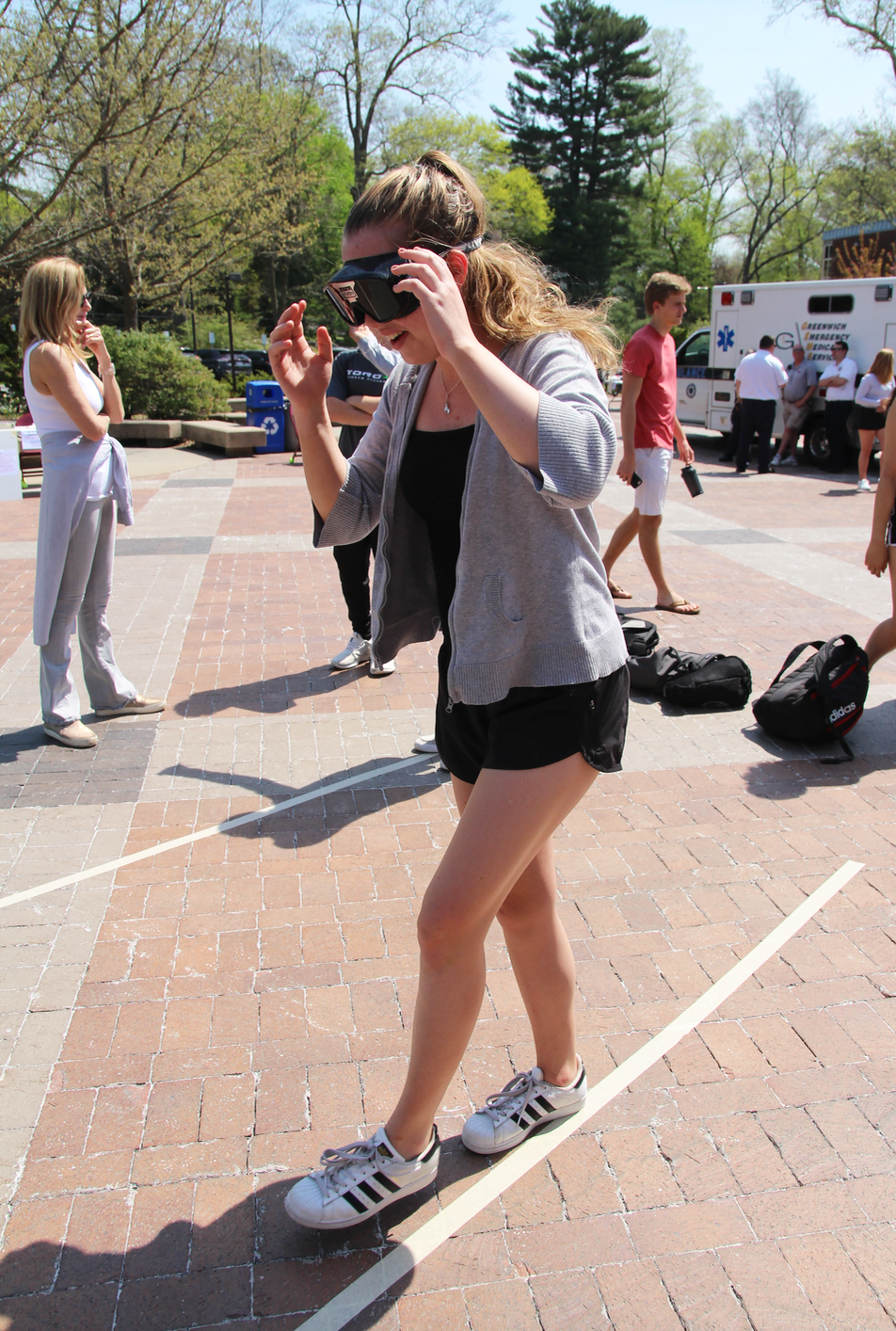 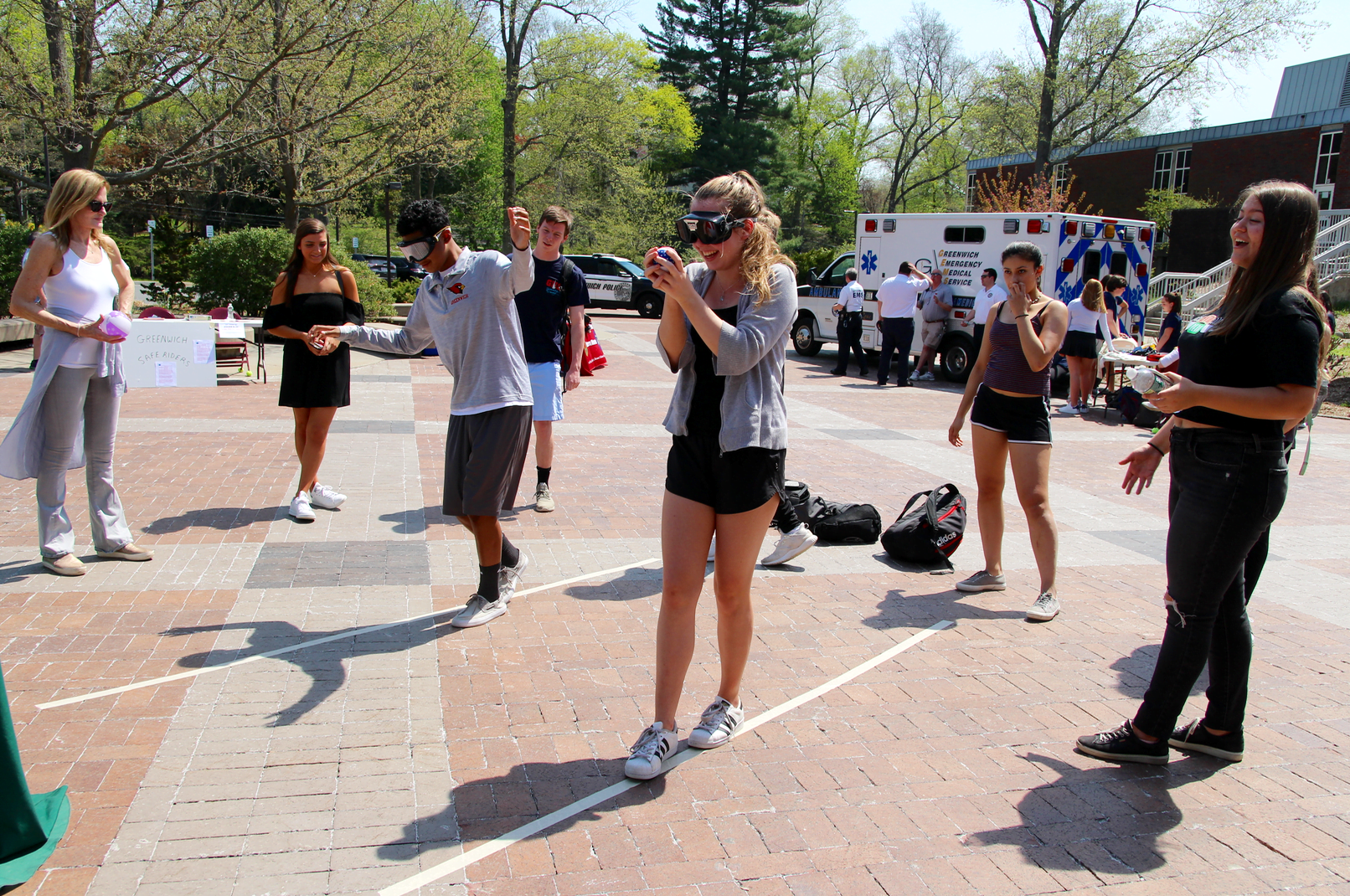 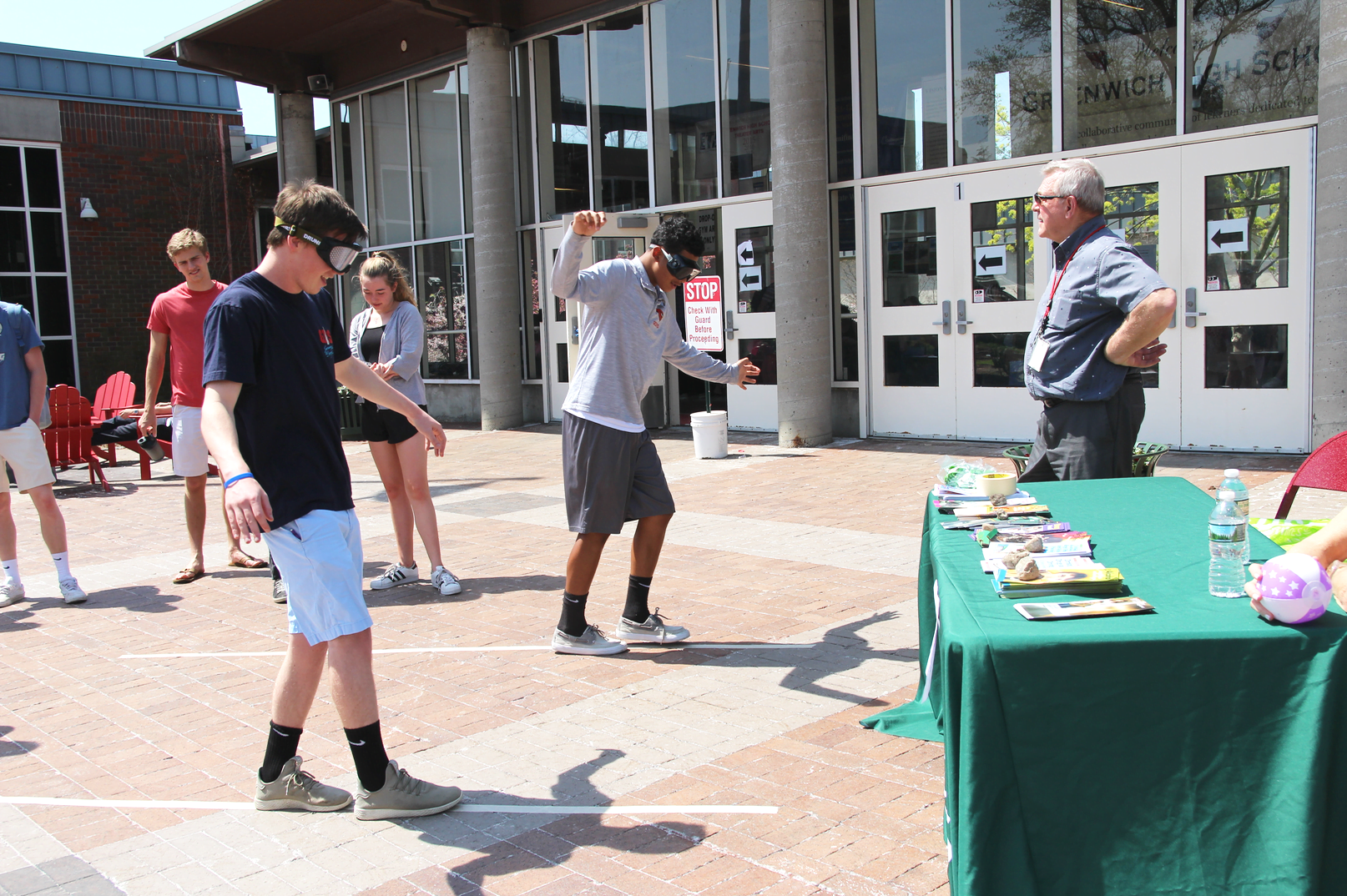