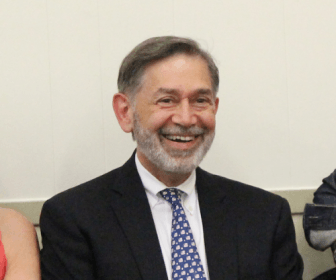 The news that the Greenwich Board of Education voted 7-1 to appoint Dr. Toni Jones, the superintendent at Fairfield Public Schools (Peter Sherr voted nay) instead of the interim Superintendent Ralph Mayo, was announced Friday at 4:30pm, in what people is referred to in the news business as a “Friday news dump.”

Many people don’t pay attention to the news on Friday night and Saturday morning, so a “Friday news dump” is a good opportunity to slip negative news out to the public without too many people noticing it.

While the Friday news dump has existed as long as newspapers have been printed, what’s new is the advent of social media.

On Facebook over the three-day weekend, residents vented their anger and disappointment that Mr. Mayo did was not selected for the job.

Reached by phone on Tuesday evening, Mr. Mayo, who grew up in Greenwich and has worked for Greenwich Public Schools for 41 years, said he had known for about two weeks that someone else was getting the job and had been disappointed.

“I applied for the job and wanted it. But, I had some time to come to terms with the decision,” he said. “I’m really touched that I have all this support.”

Mayo, who will continue as the interim Superintendent through the end of June said he needs to stay focused on the work at hand, starting with the budget.

“We haven’t gotten it past BET and RTM,” he said. “That will take a lot of time and energy. We have to stay focused. There’s a lot of work to do.”

As for the swirls of comments on Facebook, Mayo laughed. “I’m not on Facebook,” he said. “I didn’t see any of that.”

And since he thought he might be fighting off the nasty cold that is going around town, he stayed home drinking tea and staying warm over the three day weekend. “My daughter is getting married next Saturday,” he said. “I can’t be sick.”

And while he said he received a number of texts and emails of support over the weekend, he added, “We can’t take our eye off the ball and start worrying about who got hired and why they got hired.”

Asked if he would go back to his job as principal at Eastern Middle School, Mayo said he hadn’t decided yet.

“That is my job if I want it. I am reflecting on that because it bumps a lot of people and disrupts a lot of stuff,” he said, adding that Jason Goldstein who is serving as interim principal at Eastern Middle School, would go back to being Cantor House Administrator at Greenwich High School. Then, Christina Shaw, who is serving as the Interim House Cantor House Administrator, would go back to being a teacher.

BOE chair Peter Bernstein said the timing of the Friday news conference was dictated by when the contract terms which were agreed to and their ability to get the Board together for a meeting. “We also wanted to have the ability to tell our own staff and community about the decision,” he explained.

Bernstein said he understood the general disappointment from some people that Mr. Mayo was not selected. But, he said, “This was not a choice the Board made lightly. We undertook a detailed search and made a decision in the best interest of the Greenwich Public Schools.”

Bernstein, who said he and the entire Board of Education are very fond of Mr. Mayo, shared a flyer the district produced to advertise the position.

The flyer lists the requirements the Board was seeking, including a visionary leader who inspires trust, and who is committed to a student-centered philosophy.

Other bullets included: Supports personalized learning, Promotes best practices in curriculum and instructional design, Uses data decision making to manage strategic change and improve student performance, Values, insists on and is adept at proactive communications and media relations, Builds consensus and commitment among Town Boards and stakeholders, Is comfortable in building and managing a budget with sound fiscal practices, and Has ability to oversee multiple projects or initiatives, providing clear direction and expectations.

“I would hope that people will give Dr. Jones an opportunity to succeed in Greenwich,” Bernstein continued. “She is a visionary leader that will continue our progress in the areas of growth in achievement, personal and interpersonal skills. She has experience in similar districts and specifically within Fairfield County.”

Reached by phone, Board of Education member Dr. Gaetane Francis said she too was very fond of Mr. Mayo, but wanted to point out some of Dr. Jones’ qualifications that set her apart from all the other candidates.

“Toni had longevity,” Dr. Francis said. “She had 13 years in Deer Creek school district in Oklahoma, which shows she can make a long term commitment.”

“She has huge range of different types of experience from being a special education teacher, to elementary school principal, middle school principal and she has held cabinet level positions including chief academic officer,” Dr. Francis continued. “And as a superintendent in a large district, she managed large capital projects, which is relevant for our master facility plan.”

“There is a lot of experience and a wonderful attitude,” Dr. Francis added. “She said ‘Always the students at the center of every decision,’ and, ‘Always strive for joyful learning and teaching.'”

Mr. Mayo will continue as the interim Superintendent through the end of June and has offered to help smooth the transition for Dr. Jones.