Last June, Ralph Mayo, longtime principal of Eastern Middle School, was voted in unanimously as interim Superintendent of Greenwich Public Schools by the Board of Education.

At the same meeting, the board also voted unanimously to terminate the contract of previous superintendent Dr. Jill Gildea, who had decided to take a superintendent job in Park City, Utah after one year in Greenwich. 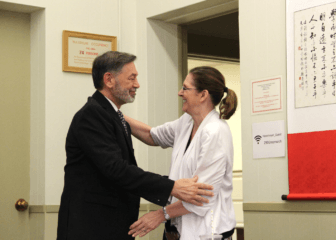 It was  a brief but happy meeting. In fact, Mayo received a hug from Gildea and a standing ovation.

She is currently Superintendent of the Fairfield Public Schools in Fairfield, CT.

Many members of the community who have known Mr. Mayo for decades were hoping he would be made the permanent superintendent.

As recently as Friday morning, on his radio show on WGCH, First Selectman Peter Tesei said he was anxious to learn the Board’s decision. “I hope they remove the interim title and make Ralph Mayo our superintendent and that he will continue to move the district forward and provide the stability and continuity that we need.”

At last August’s convocation for teachers, Mayo, who has worked for Greenwich Schools for 41 years, received a standing ovation. His first remark was that the District needed to rebuild “community trust.”

But it was not to be.

Kathleen Stowe who chaired the search committee said they interviewed many long time superintendents from 28 states, but most of them were from Connecticut.

“We have a great brand and school system that people are excited about joining. We had the advantage of time, and Ralph who gave us continuity we needed. He will help in the transition. We look forward to him playing a prominent role in the district. Over the last 20 years our permanent superintendents have served for nearly 3 years, but we shouldn’t be happy about that. I expect we’ll be happy with Dr. Jones. She said she likes living where they can sail.”

Ms. Stowe said the BOE is including a retention bonus in Dr. Jones’ contract.

“This is very different,” she said. “It’s similar to options in the corporate world, but not too common in education world. Toni said, ‘That makes sense because I plan to stay.'”

“She has managed many construction projects – planned and unplanned,” Stowe added, adding that Dr. Jones starts on July 1. “She has four months to meet many of our community members.”

All voted in favor of Dr. Jones’ appointment except Peter Sherr who opposed. The vote passed 7-1.

Mr. Sherr provided written comments after the vote: “We have a great Superintendent who is making tremendous progress, but my colleagues have decided to hit the reset button yet again. It’s a mistake.”

“It begs the question what the Board learned from the last five times they hired a Superintendent?” Sherr asked. “Meanwhile we are telling every principal and administrator who aspires to be superintendent or Assistant Superintendent that you have no future here in Greenwich. As with all the others, I’ll be working to make Dr. Jones successful for Greenwich Schools.”

As for the 7-1 vote, Bernstein said, “We obviously have different visions for the future of Greenwich Public schools and while we value the stability that Ralph has brought to the District and this year’s transition, we continue to look to the future. Mr Mayo will continue to be a part of our leadership team and share his calmness and knowledge while we bring in Dr. Jones to help us drive forward student growth, achievement, personal and interpersonal skills.”

The BOE Superintendent Search Committee was chaired by Kathleen Stowe.

“I was excited to lead the search, which resulted in a robust candidate pool from across the country, including many from Connecticut,” Stowe said in an embargoed release Friday afternoon. “The quantity and quality of the candidates demonstrated the strong brand of the Greenwich Public Schools and, ultimately, made for a very difficult decision.”

Dr. Jones is an experienced district leader with eight years as a Superintendent.

Stowe said Dr. Jones stood out for her positive attitude, forward thinking approach, proven success in comparable districts, and the value she places on community involvement.

Board of Education Chair Peter Bernstein said in the release, “Based on her many successes as a district leader, principal and classroom teacher, Dr. Jones has the ability to propel the Greenwich Public Schools strategic plan goals of student growth in academic, personal and interpersonal skills forward.”

Bernstein said Jones has successfully initiated personalized, digital and virtual learning strategies in the districts she has led.

She is well acclimated to Connecticut, and understands the value of open dialogue and involvement with and from the community,” he added.

Dr. Jones said, “As your incoming superintendent, I am delighted to have this opportunity to lead Greenwich Public Schools well into the next decade of excellence. I am looking forward to making Greenwich my new home, and I can’t wait to start meeting the staff and getting engaged in this fabulous community. While I have a few more months until my official arrival, I can ensure the Town of Greenwich that I will arrive ready to work hard and continue to move Greenwich Public Schools forward as one of the premier school systems in the nation.”

Philip Dwyer, former Chair and current Fairfield Board of Education member said he will miss Dr. Jones. “But wish her well as she gives leadership to the Greenwich Public Schools,” he said. “She achieved the Board goals set for her, managed the District well and was especially good at communicating with parents and the school staff. Fairfield has an excellent school system. However, Dr. Jones challenged us to constantly find new ways to improve our programs.”

“The Board of Education would like to thank Interim Superintendent of Schools Ralph Mayo for his unyielding commitment to the Greenwich Public Schools and his steady leadership this year,” said BOE chair Peter Bernstein, adding that Mayo will continue as Interim Superintendent for the balance of the school year.

Dr. Jones has been a superintendent in high performing and comparable districts. She is an energetic leader who listens well and creates positive momentum. Dr. Jones brings best practices from other districts, but also understands Greenwich is a strong and established community. She has had leadership experience in Australia, Oklahoma, and Northern Virginia, in both private and public schools, before settling in Connecticut.

In Falls Church, Virginia she pushed the focus to personalized learning over a 5-½ year journey, and instituted hybrid learning which allowed for 24/7 access to curriculum and courses 365 days a year.

In Fairfield, she led advancements in technology and moved the district forward by implementing programming focused on social and emotional support for all students. Additionally, Dr. Jones has successfully managed many construction projects, both planned and unanticipated.

Dr. Jones is married with two adult children. Her husband, John Jones, is a science teacher at Greenwich High School. As Dr. Jones notes, she is, “excited to have this fabulous opportunity for our family to work and live in the same area of Connecticut and in such a beautiful and vibrant place.”