The Greenwich Retired Men’s Association invited Greenwich Schools interim Superintendent Ralph Mayo and several school principals to share the mic during a presentation on how personalized learning is being implemented in public schools, especially compared to approaches most of the retirees recall from their youth.

In a slide presentation, black and white photos of classrooms with orderly rows of desks and chairs were juxtaposed with factory floors where more rows of people toiled on assembly lines.

Those photos were followed by photos of children divided into small groups in their classrooms, including some standing around raised desks, or peering though 3D goggles.

BOE chair Peter Bernstein who was elected in 2013 and re-elected in 2017, introduced interim superintendent Ralph Mayo who has been an educator for 41 years, including 24 years as a teacher and administrator at GHS, and 14 years as principal at Eastern Middle School. 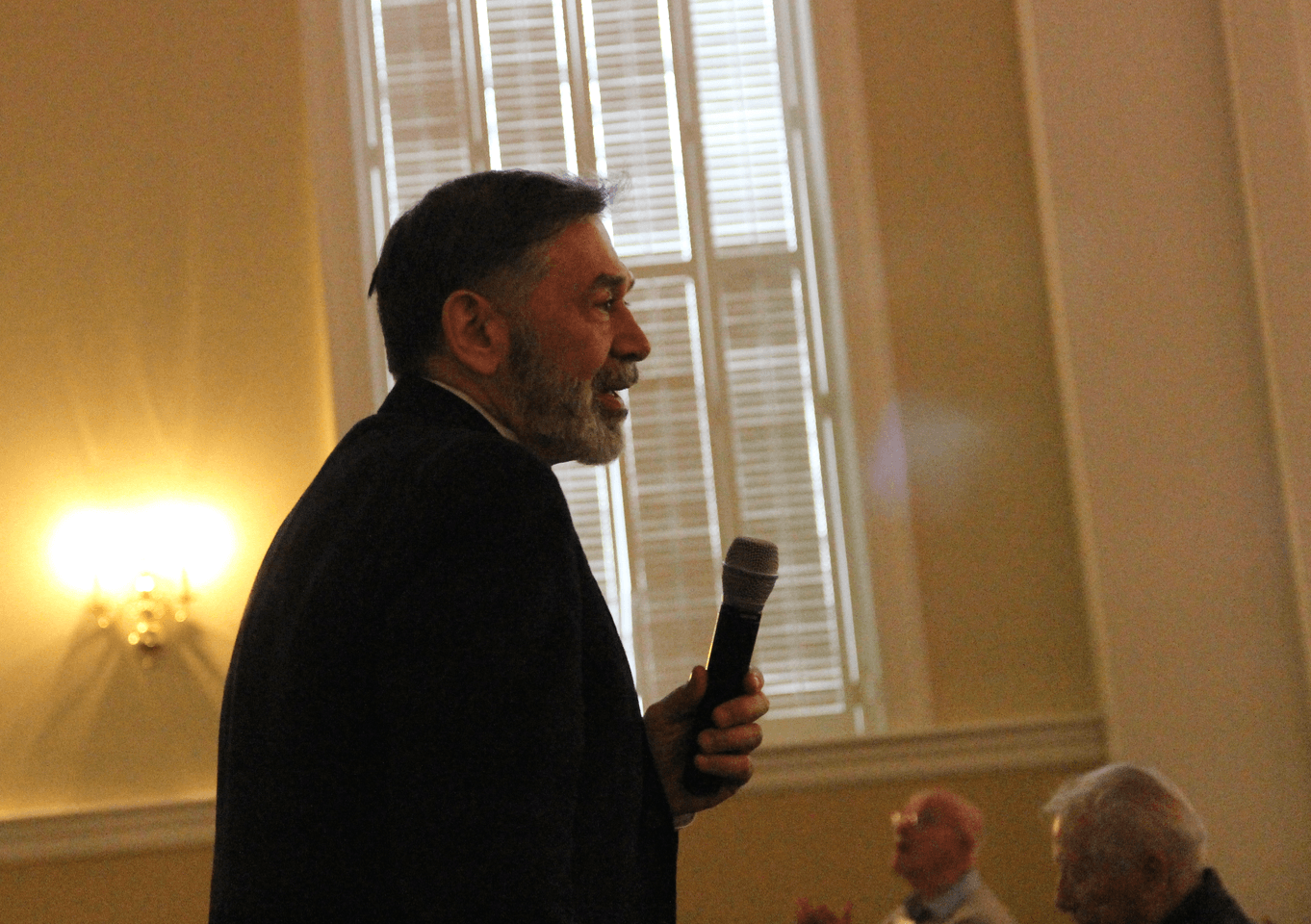 “People say, ‘After 42 years it’s time to retire.’ No, it’s not time to retire. It’s time to move our district forward and that’s what I intend to do. I’m not retiring and I’m not leaving the school district,” Mayo said to a round of applause.

Mayo described Greenwich Schools as the envy of the state, rivaling only New Canaan. He said the district’s upward trajectory includes the 20% of students who qualify for free or reduced lunch, and the 12% of students who receive special education at some time during their education.

Mayo said personalized learning is being used by the district as part of its strategic plan.

Glenville School principal Marc D’Amico said that focusing on the child rather than a model of the teacher imparting knowledge, results in a student centered learning environment. He said the idea is to give children both a voice and ability to make choices previously made solely by their teachers.

D’Amico said students frequently partner with other students who have different opinions. They keep journals where they reflect on their challenges. Over time they build resiliency and resolve, and learn about conflict management.

He said Glenville School’s new Design Lab features robotics and magnetic tiles. “Having things that they can put together and take apart gives them opportunities to do something that hasn’t been done before,” D’Amico said. “They learn there is a connection between your mind and your hands.”

D’Amico said the idea is for students to leave with both wonder and excitement to do things and make things better. 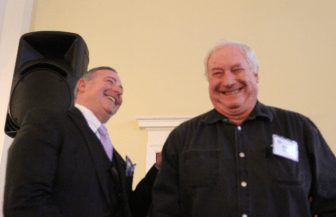 Glenville School principal Marc D’Amico shares a laugh with a member of the RMA after a panel presentation on personalized learning in Greenwich Schools. Feb 6, 2019 Photo: Leslie Yager

“Not everybody learns best sitting at a chair in front of a hard table,” Ms. Flood said.

She said her school offers flexible seating choices that include the option of raised desks where students stand rather than sit.

She said one teacher adapted a bicycle leftover from a gym program by mounting a small wooden table to its handlebars.

“Students sign up and take turns pedaling and reading,” Flood said. “They pedal off their extra energy, whereas normally they’d get up to sharpen a pencil or get a drink of water.”

Students also have opportunities to sit on medicine balls or wobbly stools where they can wiggle without having to get up and disturb their classmates.

“They sit, bounce or roll around a bit and use their core more,” she said. “It does help students to engage more and they like to sit on them. If it’s more exciting, they’re more engaged.”

Better yet, Flood said in her school’s learning commons, students learn basic coding, animation and how to create 3D sculptures. 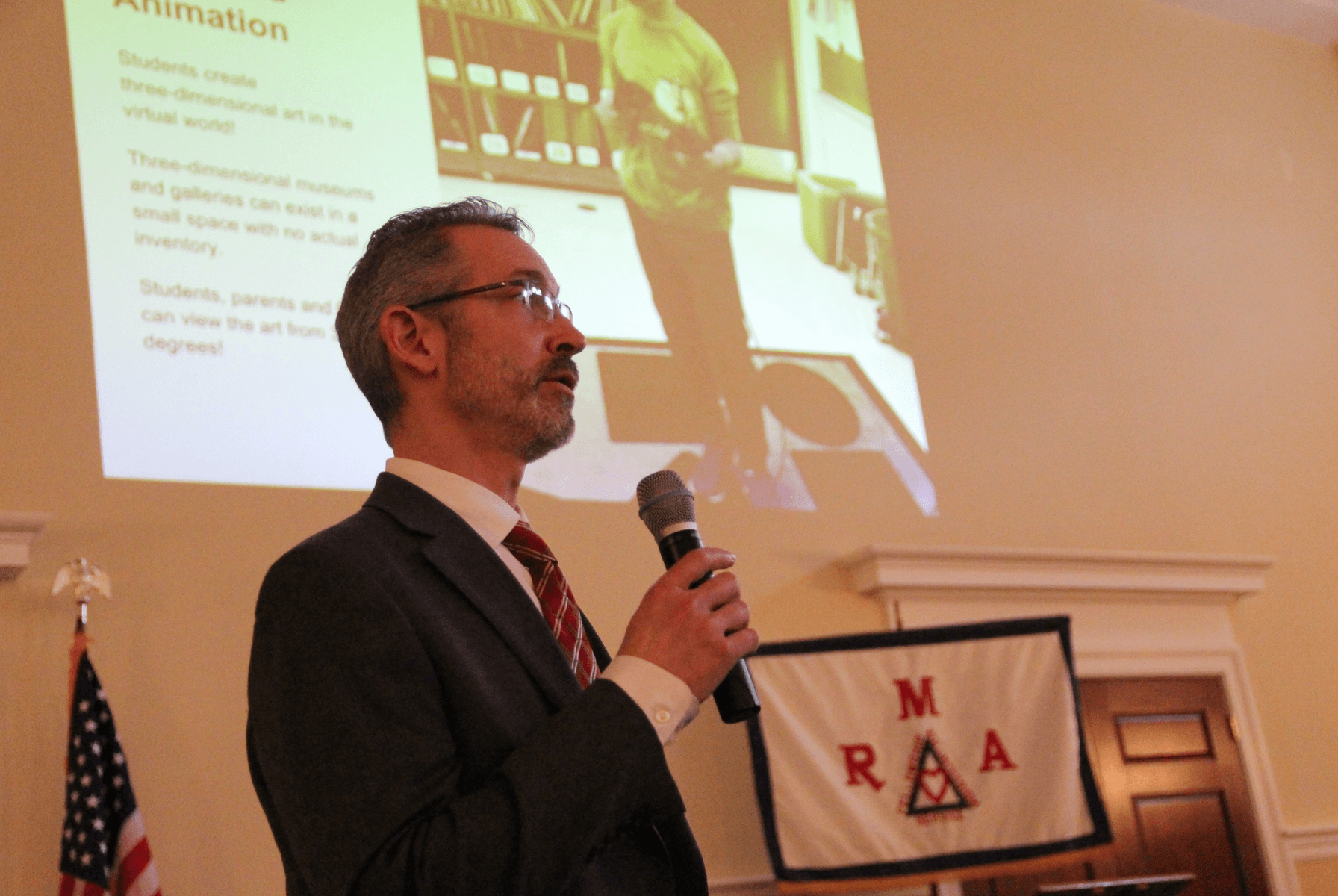 He asked the audience to take their device – whether cell phone or IPad – and go to Kahoot and log in with a code he provided.

In real time, he administered a quiz to the RMA members who were asked how many devices they own, how they found out about the RMA meeting, how much time each day they spend using the internet, and what was their primary source of accessing information when they were students.

The entire quiz was projected onto the wall in real time, demonstrating a tool available to teachers for non traditional assessment. No longer is the entire class taking one test that some students fail and others pass.

Rather, assessment is continual, and reveals where a student is struggling or thriving. “Depending on our answer, the test adapts to the next question,” he said.

After the presentation there was time for just one question, which was about how the district is dealing with bullying.

D’Amico said students go through a digital citizenship program that equips them to discern a situation where they should involve an adult. We want to reassure children that they have adults they can go to to help them with a trouble whether it originates in school or at home.

He said parents need to be vigilant to know what their child is doing online.

“My fourth grade son loves to put his headphones on when he plays on his Xbox, but the rule is I also need to hear what’s playing through the speakers on the TV that so that I can overhear if the fourth grader he thinks he is playing with is really an 18-year-old and then I can intervene,” D’Amico said. “I can’t underscore enough how important it is that parents continue to be vigilant.”

At the secondary level students, the district’s social-emotional program includes appropriate behaviors. On a case-by-case basis they develop positive strategies for negotiating situations.

Lastly, he said Greenwich Police have been a steadfast partner. “If we have a question, we pick up the phone and they’re always there to guide us, support us and in many cases, work with us and our students,” D’Amico said. “It’s an effective community policing strategy.”