It was a marquee FCIAC matchup between two powerhouse programs that lived up to its billing—packed stands, bad blood, highlight reel goals and punishing, physical defense from both sides.

In the end, the only thing missing for the New Canaan Rams was a win.

Snake bitten by penalties and an inability to control possession against the Greenwich Cardinals Saturday afternoon at Dunning Field, the Rams came out on the short end of a 13-10 decision. 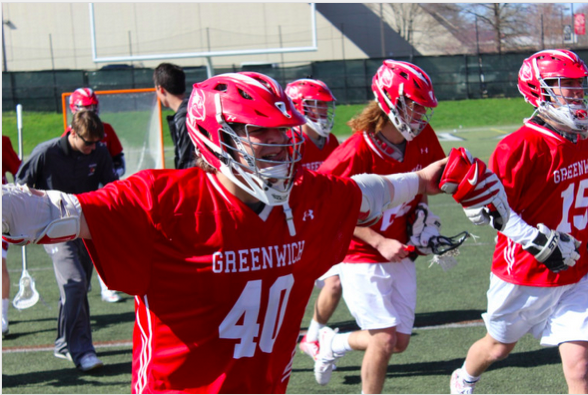 The loss came despite an inspired performance from Rams senior co-captain Michael Kraus who scored six goals on the afternoon and sparked a New Canaan rally that turned a 7-3 deficit into an 8-7 lead in the third period. Greenwich, however, reeled off four unanswered goals and outscored the Rams 5-2 in the final period to put the game away.

“These are the kind of games where you wish there was a shot clock,” New Canaan head coach Chip Buzzeo told NewCanaanite.com. “When we did what we were supposed to do, we scored. We just didn’t have the ball enough.”

The Cardinals got on the board first as junior attackman Scooter Harrington beat New Canaan goalie Drew Morris for a 1-0 lead. Kraus scored the equalizer on his first goal of the day before Greenwich took the lead again on a goal from junior Michael Sands. New Canaan senior co-captain Justin Meichner tied the game at 2 apiece with a score just before the end of the first period.

Greenwich came out strong in the second, scoring the first four goals of the period including two from junior Will Perry, extending the Cardinals lead to 6-2. New Canaan’s Peter Swindell stopped the bleeding with a goal at the 3:41 mark, but Harrington got Greenwich right back on the board with a goal to make it 7-3. Kraus then ended the first half scoring with his second goal of the afternoon, drawing New Canaan to within 7-4 as the teams headed into halftime. 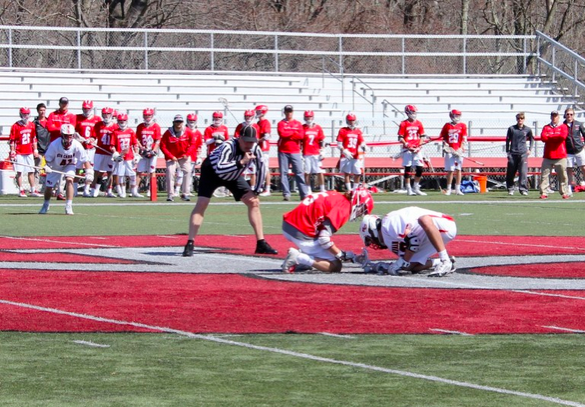 “We had four forced turnovers in the first half that hurt us a lot,” Buzzeo said. “And penalties. We were penalized way too much. You can’t go man-down that much against good teams.”

New Canaan looked like a different team to start the second half, as the Rams upped their defensive intensity and began winning face offs to control possession. Three goals from Kraus and a score from Meichner gave New Canaan an 8-7 lead with 2:19 left in the period. The lead was short-lived as Sands found the back of the net again for Greenwich, tying the game at 8-8 as the teams headed into the final period.

Greenwich improved to 6-2 overall, remaining unbeaten in conference play at 6-0 while New Canaan fell to 4-2 overall and 3-1 in the FCIAC. For Buzzeo, the hope is that the loss will serve as a wakeup call as New Canaan prepares for three games next week against Norwalk, Danbury and Fairfield Prep with a potentially huge matchup scheduled against defending FCIAC and State Champion Darien Blue Wave on Saturday, May 9th.

“They need to be humble and they need to come ready to play,” Buzzeo said. “Their execution needs to be better. They need to believe in what we coach them. You can’t go outside the box consistently and win. Look, I get it—you’ve got to improvise, you have to do some things on your own. But when we simply coach them to do certain things and it’s executed perfectly and then they think doing something else is going to work and it doesn’t, they need to understand the difference.”