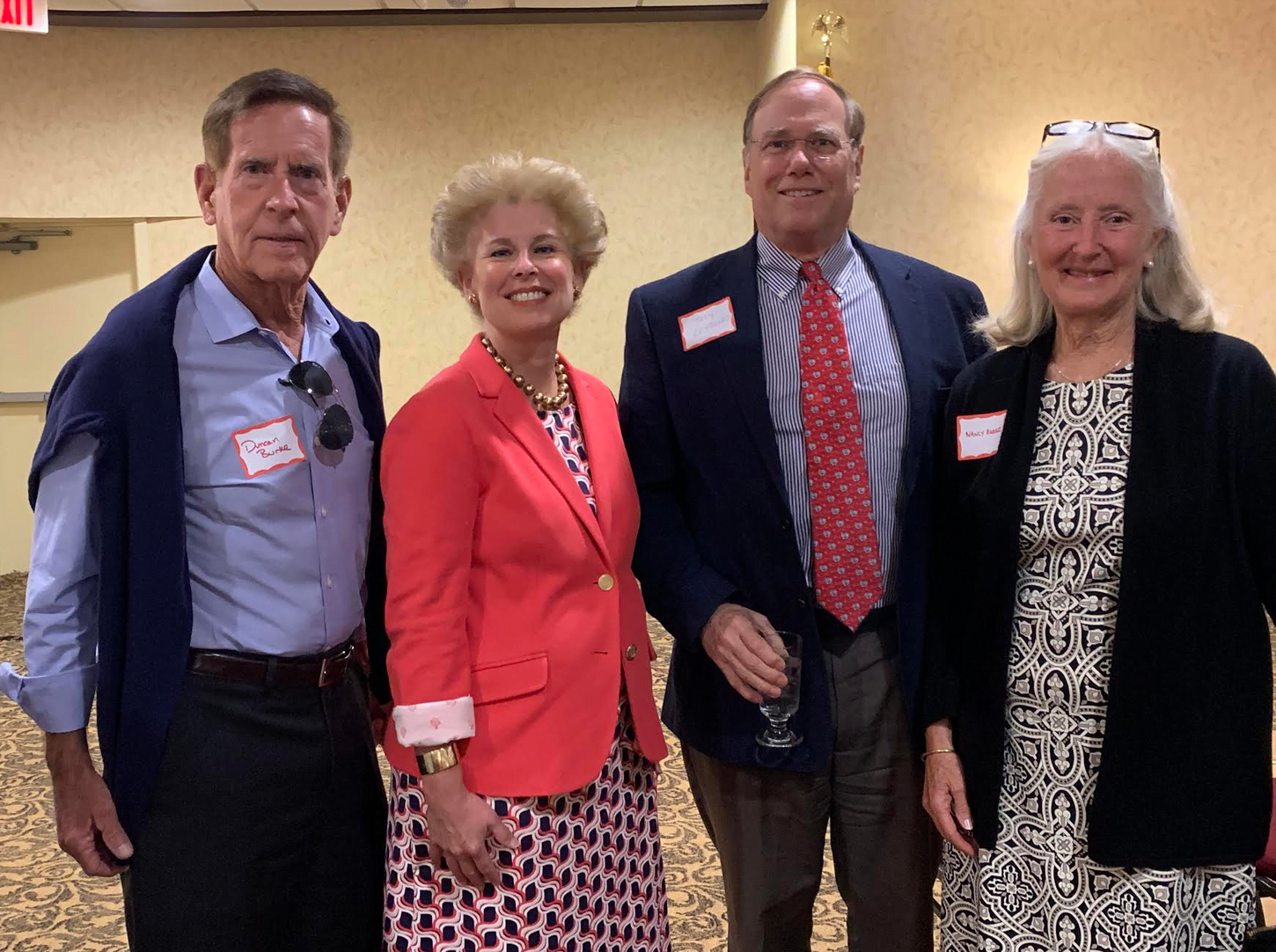 When Valerie Stauffer heard that Carol Platt Liebau, President of the Yankee Institute of Public Policy Studies, a non-partisan organization that advocates for free market, limited government policy solutions in Connecticut, would be speaking in Greenwich she immediately signed up to attend.

“I wanted to find out more about what is going on in Hartford, especially since taxes and tolls have dominated the news lately,” Stauffer explained. “Our state legislators are making decisions that will affect everyone in our state and I feel that we all should know how they will impact Greenwich and others who have chosen to live in Connecticut.”

Stauffer was not disappointed.

Hosted by the Greenwich Republican Town Committee, CT Women United and the Greenwich Young Republicans, on Monday, June 3, 2019, over 100 people were on hand at the Knights of Columbus hall to listen to Platt Liebau and Scott Shepard, Yankee Institute of Public Policy Studies Director of Policy and Research, who, in their prepared remarks, highlighted three bills – the $15 minimum wage, the 0.5% payroll tax and tolls.

These, and other tax increases, will have significant impact to Connecticut businesses and families, and especially those in Fairfield County.

While the $15 minimum wage has been marketed by the sponsors as a compassionate pay raise, Platt Liebau explained why it is anything but compassionate.

Many businesses will either close or relocate out of Connecticut.

A better solution would be to train the workers who are earning minimum wage so that they can then get higher paying jobs, rather than pass a law that requires businesses to pay rates that are not sustainable in the long term.

Platt Liebau and Shepard also discussed the statemandated 0.5 percent payroll tax for all employees to fund a paid Family Medical Leave Act (FMLA) benefit of up to nearly $1,000/week for all workers up to a maximum of 12 weeks per year every year. The FMLA definition of eligible family members for whom employees can take FMLA leave will be changed to now include any blood relative or friend who is “the equivalent of a family member.”

Incredibly this means that workers would now be able to take paid family leave to take care of not only their immediate family, but for their distant relatives or good friends. This provision drew and audible gasp from the audience. The payroll tax only applies to employees earnings up to $132,900, similar to Social Security.

Yet, while this bill has also been marketed as a compassionate bill, Platt Liebau explained that it will be anything but. For starters, the law exempts unionized state employees and all municipal employees from participation in the paid FMLA program, while non-union state employees will have to participate. Additionally, for municipal employees, once a municipal bargaining unit negotiates inclusion into the program, non-union employees for that municipality will automatically be included as well. The program will require significant funding and the Yankee Institute has estimated that if FMLA use by employees rises to 20 percent (which is the percentage of people who currently use vacation time to care for immediate family members), then this payroll tax will have to rise by nearly nine times – from 0.5 percent to nearly 4.5 percent. At 4.5 percent the average Connecticut worker would pay approximately $2,700 per year in state FMLA payroll tax – more than the average payment for state income tax.

The last topic discussed in their formal presentation focused on tolls. As both Shepard and Platt Liebau explained, tolls are a regressive tax which will affect the working poor and middle class the most. While tolls were not included as part of the budget package being approved this week, primarily because the majority party did not have the votes to pass the measure, there will likely be a special legislative session to address the issue this summer.

Governor Lamont has made this a cornerstone of his budget and has been offering incentives to legislators, such as raising money for their campaigns, building bridges or trains stations, to get their vote. Additionally, in order to obtain approval from the Federal government, any tolling plan will need to contain congestion pricing. Congestion pricing, they explained, will affect Fairfield County the most, since the majority of other parts of the state does not have significant traffic.

The impact, according to Shepard, will be that once again Fairfield County will be subsidizing the rest of the state by paying the most in tolls. As if that wasn’t enough, the current budget earmarks monies generated from the Department of Motor Vehicles that were supposed to go to the “lockbox” Transportation Fund will be diverted into the general fund. Based on this, as well as the past track record of legislators in Hartford who have diverted monies that were supposed to be placed in the Transportation Fund time and time again, there are simply no guarantees that funds generated from tolls will be used solely for improvement of transportation infrastructure.

Finally, as everyone knows, tolls will only increase in price and the cost to implement them, both in the construction of the overhead gantries and in collection of fees, will also be expensive. Both Platt Liebau and Shepard urged the attendees to contact their legislators and to urge their friends and family to contact them as well to urge them not to vote for tolls, especially in towns with legislators who are potential swing votes.

The evening ended with a spirited question and answer session. “This was an eye-opening evening,” commented Hilary Gunn, who has been active opponent of tolls. “I knew that legislators were contemplating large tax increases but the extent is mind-boggling. It is very discouraging. We need to let our representatives in Hartford know that they need to help revitalize businesses, and not put the tax burden on the middle class and the elderly. Clearly these taxes are not the compassionate policies that the majority party in Hartford claim them to be.”