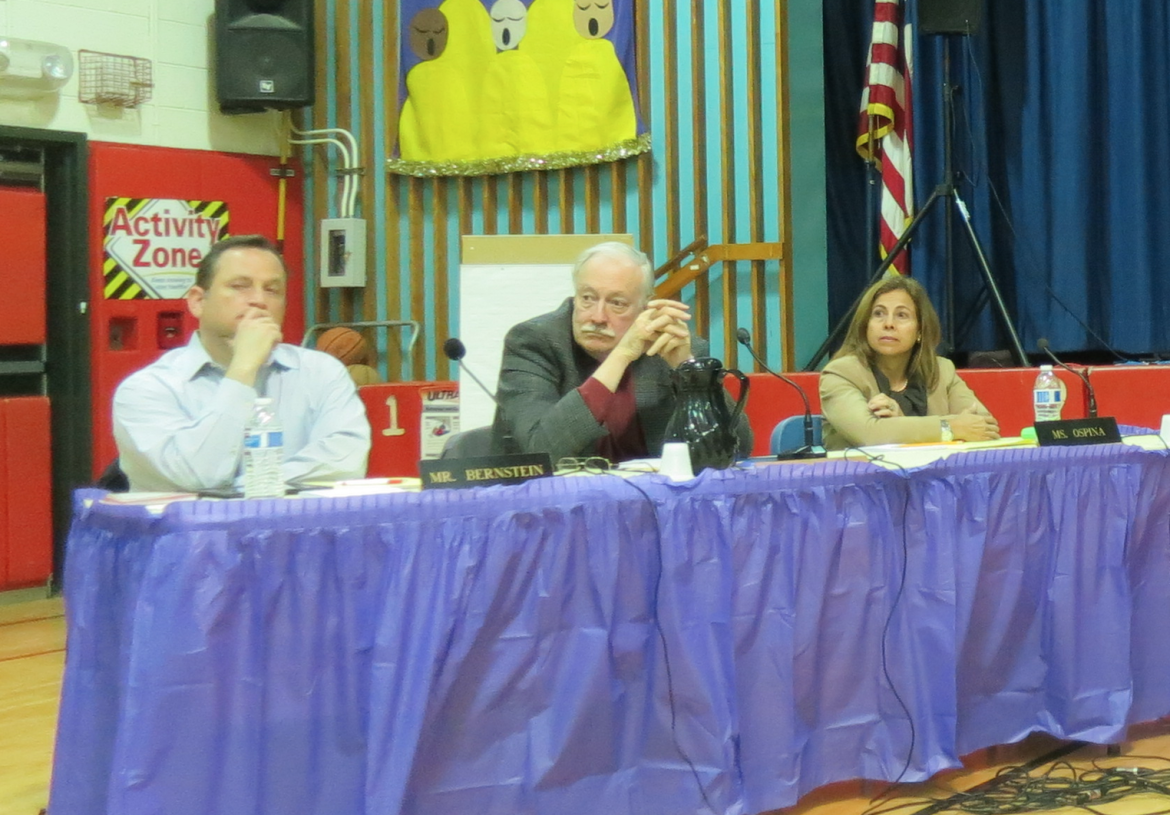 Recently, Board of Education member Peter von Braun was questioned by a caller to the Greenwich Matters show on WGCH 1490 about the absence of a Greenwich High School marching band in the Town’s recent 375th anniversary parade.

In the exchange Mr. von Braun replied, “Right now, short term the reason we don’t have a marching band — despite having one of the finest high school bands in the world — is that the administration has decided to prosecute, or some would say persecute, Mr. Yoon, the leader of the marching band.”

The caller corrected Mr. von Braun, pointing out that GHS hasn’t had a traditional  marching band in local parades and football games for years.

Mr. von Braun’s response was notable on two counts. First, von Braun, who is running for re-election on Nov. 3, was uninformed that Mr. Yoon hasn’t overseen the marching band in quite some time. Participation in marching band was dropped as a requirement for band members about ten years ago, and its reincarnation, an optional extra-curricular in which members wear red t-shirts rather than traditional uniforms with epaulets and feathered helmets, has recently been re-branded the “pep band.”

More notably, von Braun’s depiction of the administration’s “persecution” of the 23-year band teacher takes into question his impartiality.

Board of Education members did not attend any of the public hearings to determine whether Mr. Yoon will retain his job. According to the School Superintendent’s attorney, Mr. Mooney, the Board members were instructed not to attend or read news accounts of the hearings, which stretched on to nine full days of six-hours apiece.

In an email response from Mr. Mooney, relayed by Kim Eves, he said that the Board of Education members must make a decision after the Hearing Officer issues his findings of fact and recommendation as to the termination of Mr. Yoon’s contract.  The report is expected in December. Mooney said the Board members are being advised by Attorney Wayne Fox, the Town Attorney and suggested following up with him. (Mr. Fox did not respond to two requests for comment this week.)

In the meantime, Mooney said that in general, under the Teacher Tenure Act, “Board of education members are required to act impartially and to consider only the information in the report in making the decision, not any other information.”

“Accordingly, board members are typically advised in such a case not to attend hearings or to read about the case in the newspaper,” Mooney continued. “Moreover, just as judges do not make public comment on the cases they will decide, Board members are typically advised not to comment on this matter before they have received the report and make a decision based on the facts as found by the Hearing Officer.”

In his on-air remarks, Mr. von Braun appears to breech the directive to remain impartial and consider only the information in the report in making the decision, not any other information. And, given the imminent election, it begs the question whether Yoon supporters will vote as a block for Mr. von Braun, knowing his stance.

Daniel Young, who is Mr. Yoon’s attorney, for his part said he knew of no specific instructions given to the Board of Education regarding speaking to members of the public or reading the press coverage of the hearings.

In fact, Young said, in an email that he disagreed with Attorney Mooney’s advice that board members not read new accounts of issues facing their school system, including possible teacher terminations.

“When a teacher termination comes before the Board of Education, the members will have the responsibility of deciding the case based on the facts found by the impartial hearing officer,” Young said. “The board members can dutifully undertake that responsibility even if they have read other things about the case in the newspaper or have spoken to parents, students, constituents, or others about a matter.

“In general, advising board members not to read press coverage or listen to concerns from others about a major issue facing the school system is telling them to stick their heads in the sand.” Daniel  Young, attorney for John Yoon

Certainly, during the public hearing portion of last May’s Board of Education meeting, when multiple supporters of Mr. Yoon gave an outpouring of support for the band teacher, the members, including Mr. von Braun were listening.

Furthermore, Young said, “While I don’t believe board members should try to gather facts on their own, speaking to constituents and being aware of what the whole community knows from reading the press coverage is, I believe, part of their job and a responsibility that they have as a board member.”

Young pointed out that there is a specific Connecticut Supreme Court case that addresses this issue, acknowledging that school boards are significantly different from impartial judges.  As the Supreme Court recognized in Rogers v. Board of Ed. Of City of New Haven, 252 Conn. 753 (2000), a board of education has many more responsibilities than just ultimately deciding if a teacher should be terminated.  The Supreme Court explained, “A board of education has the task of overseeing the local school system as well as serving as the vehicle for state and local interests vis-à-vis the school system.”

Young said that the state Supreme Court then acknowledged that a board of education also has the responsibility to adjudicate matters such as teacher terminations.  “Board members cannot ignore one responsibility because they have the other,” he said. “Because of these broad, differing responsibilities, the court recognized that it is expected that school board members may learn information from sources other than the hearing officer’s report, including from parents who may want to express their views.”

“Taken to its logical conclusion, if you tell school board members to remain ignorant of an issue that could lead to a teacher’s termination, you are telling them that they also shouldn’t be reading letters written to them by constituents or talking to constituents about their concerns relating to a teacher termination,” Young said. “As the Supreme Court has recognized, I believe it is a school board member’s responsibility to be aware of what is going on, and to be a conduit between members of the community and the school system.  If they don’t know what is going on, I don’t see how they can do that.” 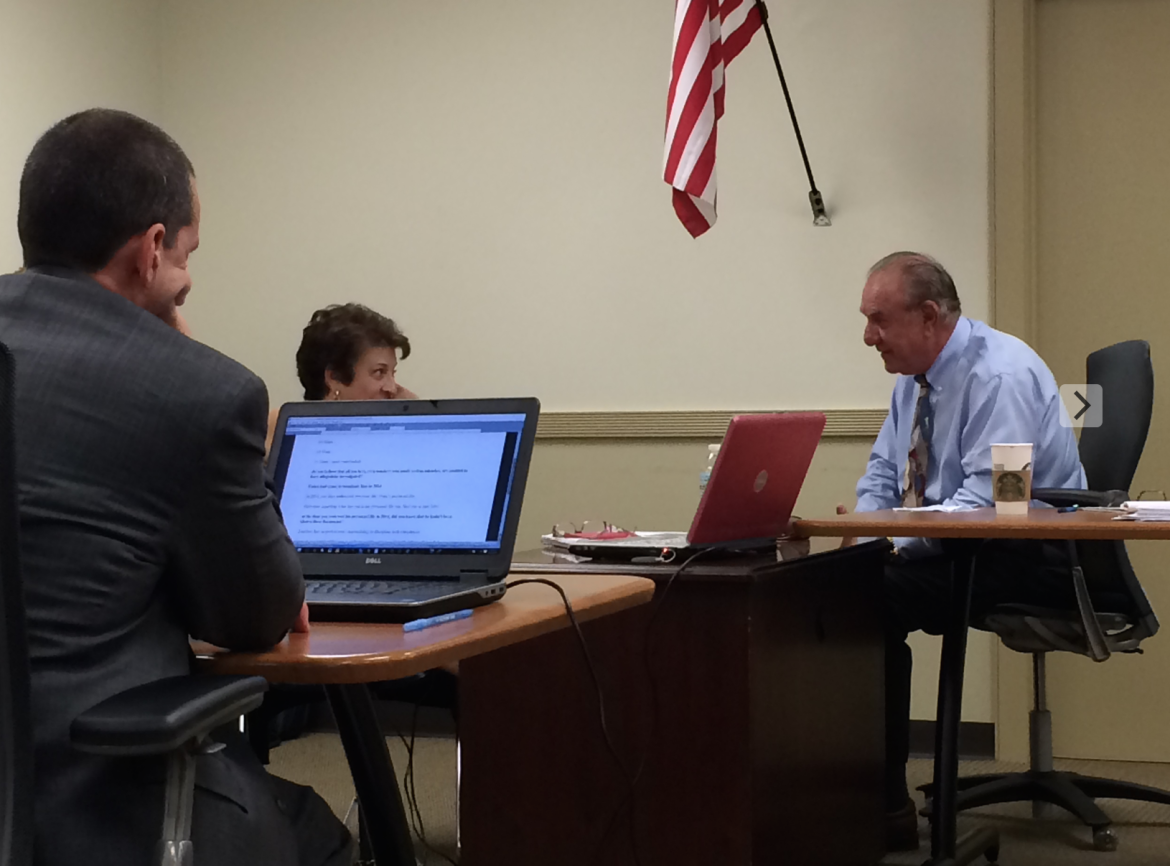 On the 9th and last day of public hearings, the court stenographer chatted with the hearing officer, Mr. Webber, during a break while Mr Yoon’s attorney Mr. Young looked on. Credit: Leslie Yager

Mr. Young said that ultimately Mr. Attorney Mooney’s advice deprives a community of access to their leaders at a time when it often is most needed.

Mr Young and Mr Mooney will submit their briefs by Nov 5. The hearing officer, Mr. Webber, is due to submit his recommendations to the Board of Education by Dec 7. From there the Board has 15 days to determine whether Mr. Yoon keeps his job or not.