Robert Lichtenfeld, who just retired on June 30 after serving three years as Director of Human Resources (HR) for Greenwich Schools, testified from 10:30 until 3:35pm, with a one hour lunch break, on Day 2 of the hearings to determine the fate of Mr. Yoon, who the district seeks to terminate.

Mr. Lichtenfeld, who had a career as a teacher and administrator in New York that culminated in an eight-year run as Superintendent at Katonah-Lewisboro said that in Greenwich he didn’t always get involved when there was a parent or student complaint about a teacher, He said that investigation is typically done by the administrator in his or her particular building.

Both Dr. Winters and Mr. Lichtenfeld said that the investigation was limited to the word of Students A and B and their parents.

Though the class that Student B said she felt humiliated in was taught by two teachers, the second teacher was never questioned, nor were any other other students.

Mr. Lichtenfeld repeated the story of a girl, Student B, being humiliated when she was sent to the back of the room, when in fact she was just moved back one row because she was talking too much. Both Dr. Winters and Mr. Lichtenfeld admitted that they failed to question Mr. Yoon as part of the investigation. In fact, they didn’t tell Mr. Yoon about the complaints despite the requirement in the teacher contract to do so.

Mr. Young read a sentence from the teacher contract: “Any complaint directed at a teacher deemed serious enough shall be brought promptly to the teacher’s attention.”

Mr. Lichtenfeld said that was a “recommendation.”

Mr. Young said “Shall” is obligatory, as opposed to “May,” and said it was not optional.

Due to the lack of investigation, details of Student A’s record of disrespecting Mr. Yoon and an incident in which he had made the entire band late for a competition did not emerge or get factored into the decision to fire Mr. Yoon. Mr. Lichtenfeld admitted during questioning that parents are often biased in favor of their own children.

Mr. Young asked Mr. Lichtenfeld over and over whether he agreed that six weeks was too long to take to inform Mr. Yoon of the complaints filed against him and going ahead and suspending him. (The complaints were submitted on March 12 and 19 and Yoon was suspended on April 28, when he was sent a sent a pre-disciplinary hearing notice.)

“We acted as expeditiously as possible,” Lichtenfeld said. “I wish it had been faster, but I don’t think it had been unreasonably slow.”

Young pointed out the irony that Lichtenfeld repeatedly asserted six weeks was “long, but not too long.” Yet, at the same time Lichtenfeld faulted Mr. Yoon for not contacting student A over the weekend to give him a chance to behave better or warn him of the pending consequence.

The consequence was that he lost his post as section leader.

A section leader is the student who hands out sheet music, and honor with a small “h.” The position doesn’t go on a transcript or boost a report card grade.  Mr. Young likened the section leader job to being a line leader in kindergarten. When he asked Mr. Lichtenfeld if he thought a teacher should give a warning before he took away a student’s job as a line leader, the audience chuckled. There were other analogies to a football coach yelling at a player and subbing him for another player.

Student A’s transgression took place on a Friday night. Mr. Yoon relieved him of his section leader job in front of other members of band at the 6:30am Monday morning rehearsal.

In a blow to Mr. Yoon, the arbitrator, Mr. Webber allowed the school district’s attorney Mr. Mooney to discuss what led up to the 2014 Last Chance Agreement. Mooney said, “History informs the meaning of the ‘Last Chance Agreement’ and all the items in the last chance agreement are relevant.” 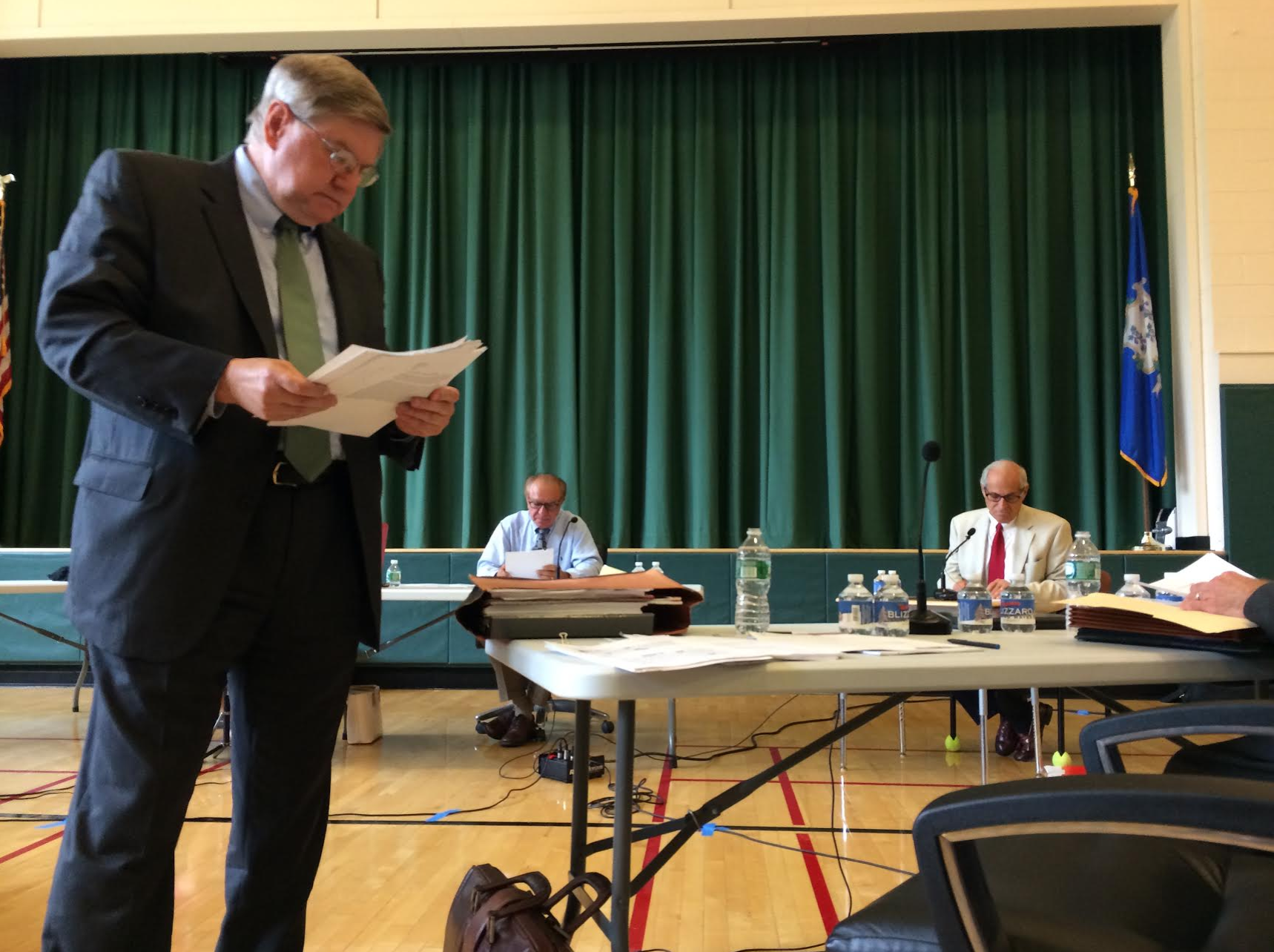 To that end, Mr. Lichtenfeld recounted an altercation between Patrick Taylor and Mr. Yoon that preceded the “Last Chance Agreement.”

During that altercation, Mr. Taylor used an expletive, angering Mr. Yoon. Lichtenfeld, who said he had no formal training in human resources, said that his understanding was the pair nearly came to blows before another faculty member interceded. Lichtenfeld said Mr. Goldstein at GHS was in charge of overseeing the relationships between the five members of the department, which he described as dysfunctional.

He said the five were instructed to avoid each other and communicate strictly by email.

A quick Google search turns up that John Spang sued the district over how his termination was handled, winning a settlement. Also, Spang replaced John Thibdeau who was fired after using school money to buy computers and software that were found in his home. Also on Lichtenfeld’s watch, a scathing report from the comptroller resulted in an overhaul of the district’s business department. Risa Ross, a clerk typist, complained about financial malfeasance in the district, but lost on an appeal.

Still, Lichtenfeld insisted he had fought for Mr. Yoon, and wanted to give him one more chance in 2014. “At the pre-disciplinary hearing I reviewed a number of letters from members of his department in which they expressed physical fear because of his temper,” Lichtenfeld said. He described having “a frank, open and honest conversation” off the record, without union representation with Mr. Yoon.

“I told him if he could be more reflective and considerate of students that he could have a better chance of keeping his job… He seemed very receptive,” Lichtenfeld recalled. 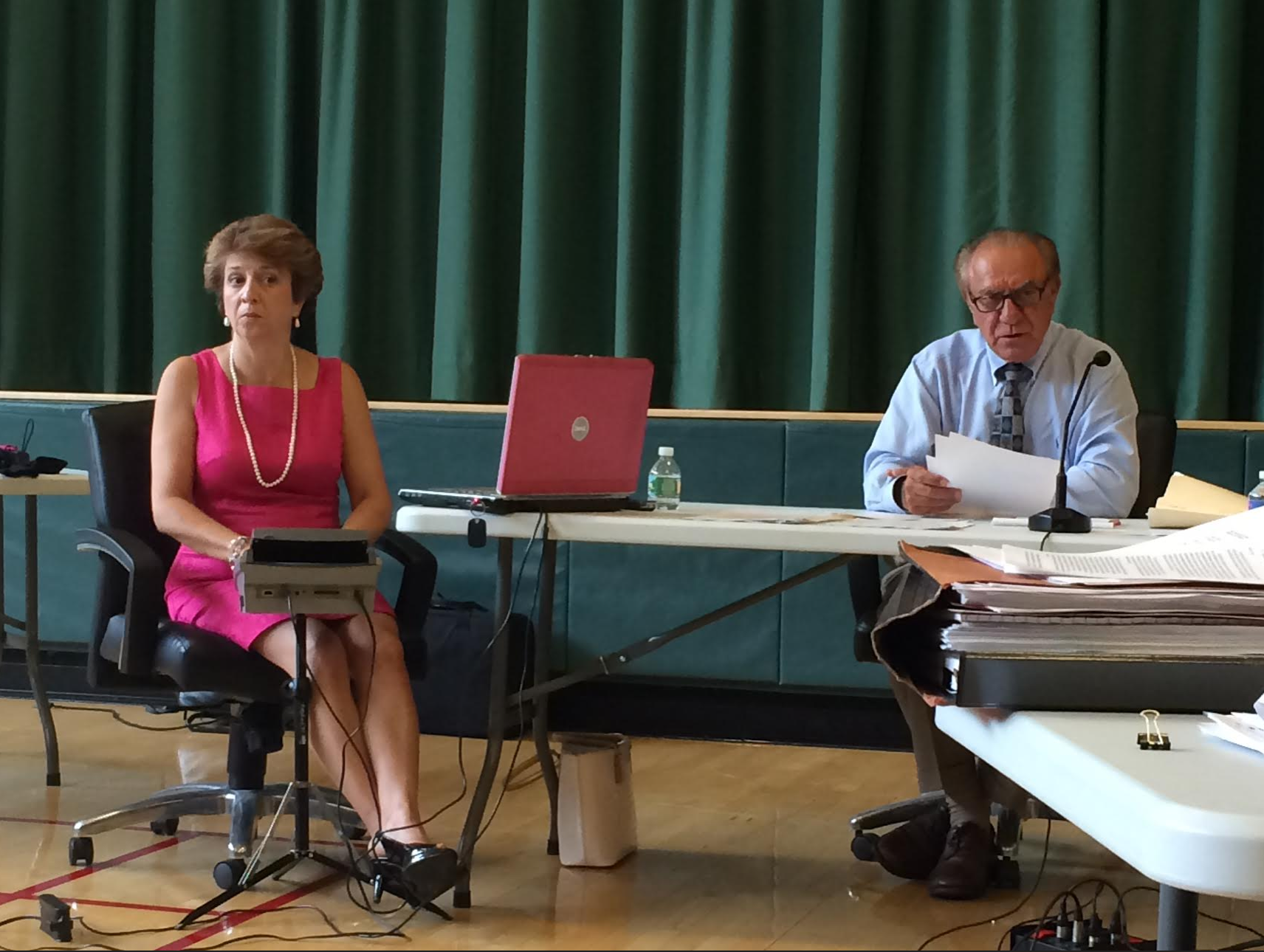 Mr. Lichtenfeld said that Mr. Yoon’s suspension become a matter of public record during the May 21, 2015 Board of Ed meeting. In fact, this news site reported the news of the suspension on Wednesday, May 13 following students’ creating of a Facebook group on May 11.

Students knew Mr. Yoon had a perfect attendance record and thought it strange he was absent several days in a row and parents began to call GHS and ask where Mr. Yoon was. When they were told it was a confidential personnel matter, it was no stretch for them to conclude Yoon was in trouble.

And yet, on Day 2 of Mr. Yoon’s termination hearings,  Mr. Mooney implied that the name of Student A had been leaked to students by Mr. Yoon. “At the public board meeting in May 21 there was a turnout of about 60-75 parents and students who spoke on behalf of Mr. Yoon. One student referred to one of the students that we had discussed very specifically, student A,” Lichtenfeld said.

“Do you have any idea how the students knew to publicly identify student A?” Attorney Mooney asked.

“In my opinion it was worse than that because it was identifying the specific actions!” Lichtenfeld said, adding that after that meeting, Greenwich Time sent an FOI request to his HR department for Mr. Yoon’s disciplinary records.

Mr. Lichtenfeld said  his awareness of the strong support Yoon has among parents did not impact his decision. “I think we have a primary obligation to protect students,” he said.  “We have a dysfunctional department as a result. We have parents who are afraid to come forward. We have students who drop out of band. We have to protect all students not just the most talented, highly motivated students.” 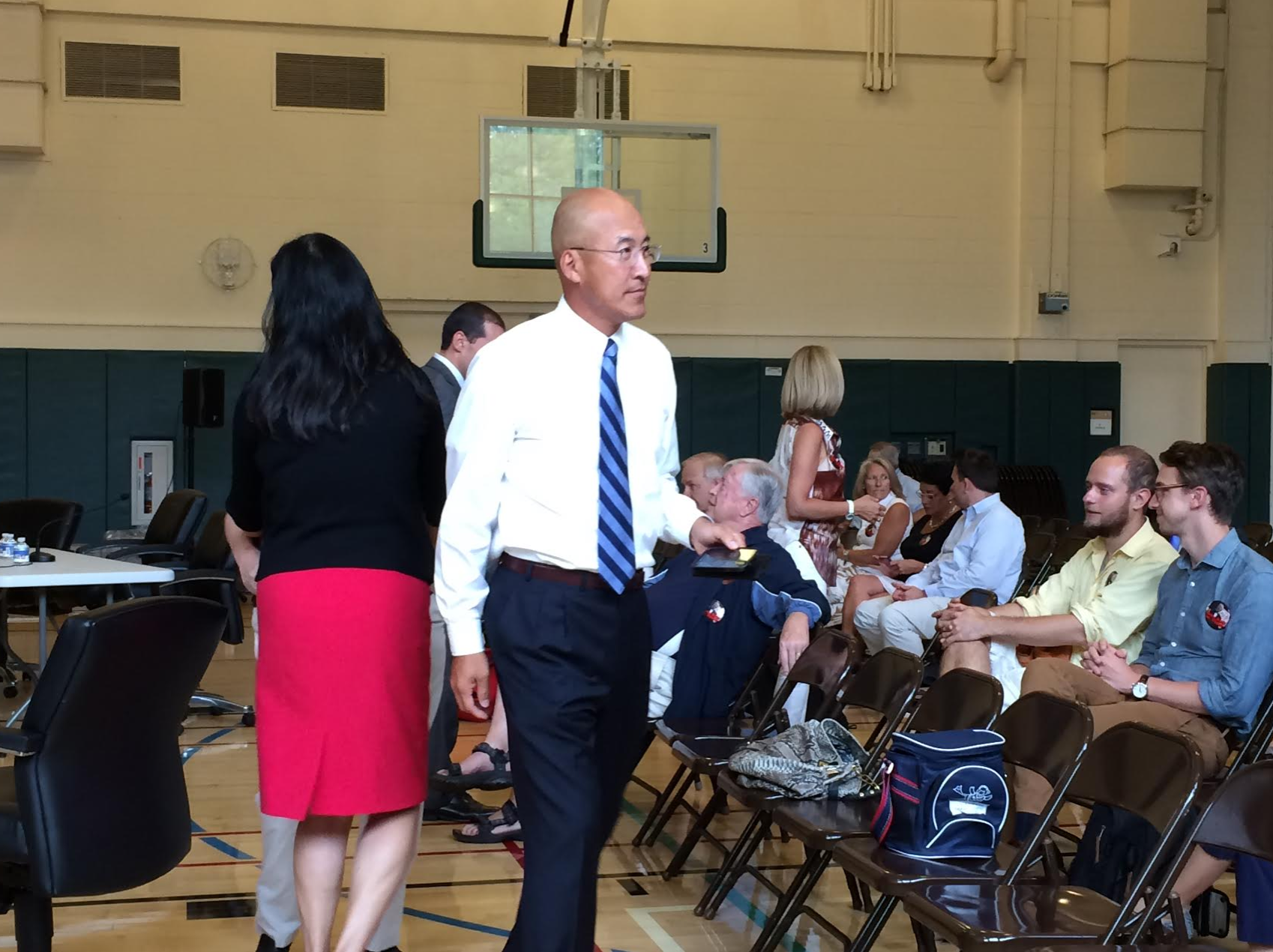 Mr. Yoon arrived for day 2 of the hearings to determine whether he will be terminated as band teacher at Greenwich High School. Credit: Leslie Yager

“I feel no there is no reasonable alternative to terminating Mr. Yoon,” Lichtenfeld said. “And I was his advocate last year for the “Last Chance Agreement.” What I found most disappointing and discouraging is that he seems unable to understand the issues or unable to reflect what the expectations are in terms of treatment of all students, not just some students.”

There was some disagreement over the circumstances of Mr. Lichtenfeld’s son’s departure from jazz ensemble. Mr. Young asserted that he skipped an audition and Mr. Lichtenfeld recalled that he auditioned but didn’t make the cut.

Mr. Young said that the ugly altercation between Mr. Yoon and Mr. Taylor in 2014 was of equal parts, but a letter of constructive criticism never made it into Mr. Taylor’s personnel file. During that altercation Mr. Taylor called Mr. Yoon an expletive.

“I have no explanation why they weren’t put in his personnel file,” Lichtenfeld said, acknowledging that indeed, Mr. Yoon’s Last Chance Agreement did make it into his personnel file. Mr. Lichtenfeld acknowledged that the yelling and cursing on the part of Patrick Taylor were similar allegations to the ones that resulted in Mr. Yoon’s Last Chance Agreement.

“I didn’t think that relationship was going to be mended,” he said, acknowledging that Mr. Yoon and Mr. Taylor had previously been friends.  As for problems in the relationship between Mr. Walker and Mr. Taylor, Lichtenfeld said he didn’t even know there was a problem between them.

Fast forward to this spring. Mr. Young asked Mr. Lichtenfeld, “Why did you think he needed to be suspended while you were investigating the two complaints? You don’t always suspend a teacher when you’re conducting an investigation. There was an email to the family suggesting they take it or leave it,” he said, referring to the family’s pursuit of their complaint.

In Lichtenfeld’s email to Dr. Winters he said the complaint from Student B “could be very helpful for our case.”

Mr. Young asserted that Mr. Lichtenfeld had already made the decision to suspend Mr. Yoon.

“Having two situations that in my opinion violated the last chance agreement, I felt it was the potential of a growing problem,” Lichtenfeld responded.

Mr. Young pointed out that his own FOI request to Lichtenfeld wasn’t fulfilled until after Mr. Lichtenfeld retired, yet Lichtenfeld promptly provided the Statement of Reasons to Greenwich Time even though that newspaper didn’t ask specifically for them.  “They didn’t request it, you just gave it to them?” Young asked Mr. Lichtenfeld.

The next hearing is August 10th and Dr. McKersie will testify. It will be held at Glenville School at 10:30am.