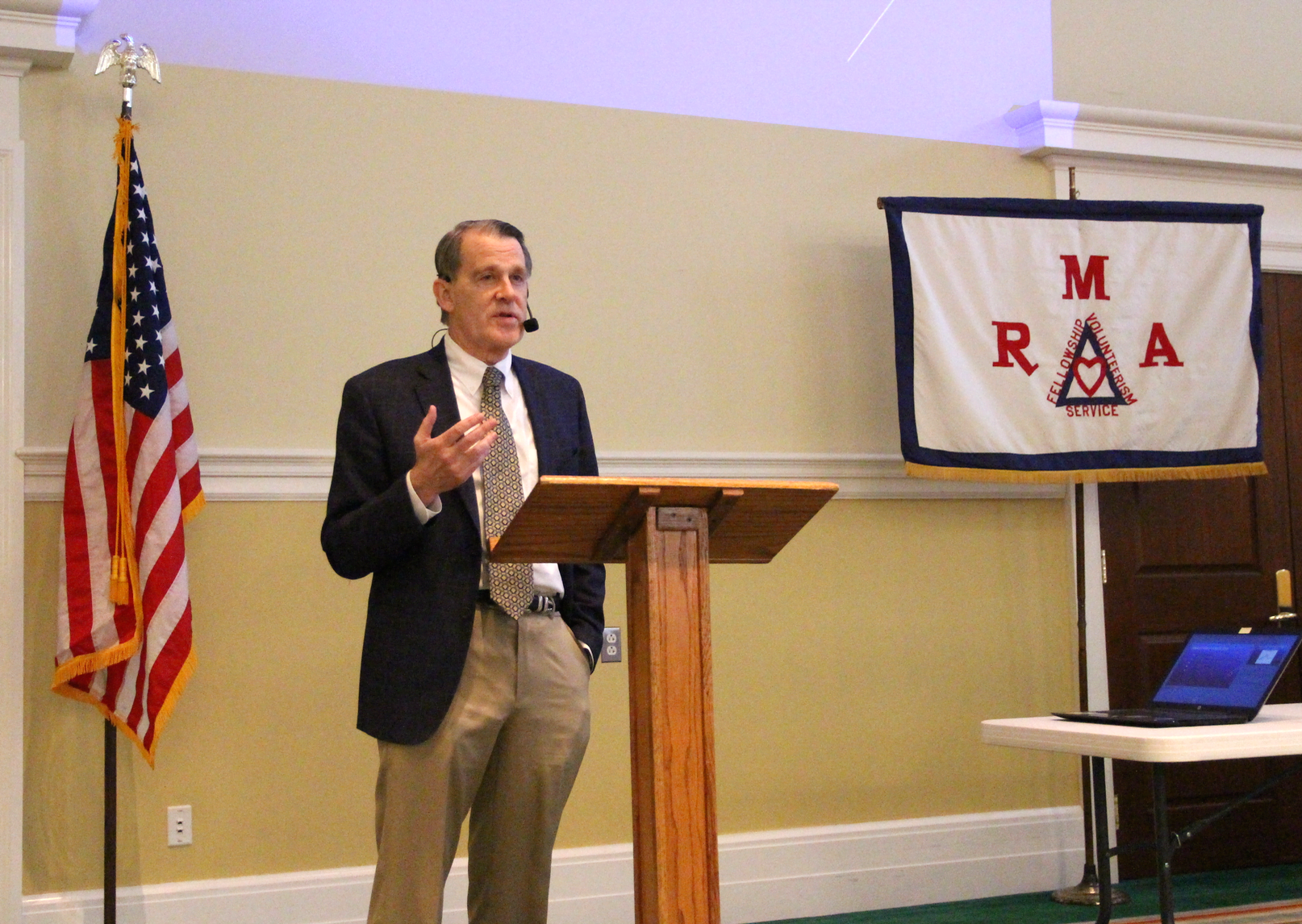 He said if a house that sold for about $9 million ten years ago sells for $7 million now, “That’s still someone spending $7 million on a house in Greenwich. …Too often we focus on the hole and not the doughnut,” he said.

“Greenwich has always been a magnet for higher incomes and a magnet for diversity,” Pruner said, adding that 29% of people who live in Greenwich were not born in the US.

Asked by Peter Berg about a projection in a UConn study that Greenwich’s population will decrease by 20% by 2040, Pruner said he was not convinced.

“I think the idea of Greenwich’s population will shrink is highly improbable,” he said. While he acknowledged that new construction – say two condos replacing a multi family house with three or four units – results in fewer people and more square footage, he said other trends compensated. He pointed to developments at places like West Putnam Avenue and 143 Sound Beach Avenue.

Another trend he described as “invisible” is the large number of AirBnB units in Greenwich which he estimates around 200. That said, Pruner noted it is also legal to rent spare rooms in a house to tenants if one is willing to share a kitchen.

He said he is also seeing “new wealth” families with three to six children buying smaller houses and adding “party barns” to the properties.

“Greenwich is still a desirable place to live.” – Mark Pruner

The property taxes paid in Westchester County New York are triple those of Greenwich. A $1 million house in Greenwich is taxed on average $8,000 whereas in Wetchester the tax on a $1M house is $24,000.

Pruner said  a trend in Greenwich is to age in place, but there is also a trend  for older citizens to move out and be replaced by younger buyers.

“But, on the west side of town, there are people moving to Glenville, Pemberwick and Byram to commute to jobs in Westchester.”

Also, there are Westchester empty-nesters with a house they no longer need and don’t want to pay high property taxes, who, starting as early as their 50s, often look to move to Greenwich for lower property taxes.

“But people are also looking at Florida, Texas, North Carolina, South Carolina and Arizona,” he said.

Pruner said the change in the SALT tax deduction is encouraging earlier movement, but that may have run its course. SALT stands for state and local tax deduction has a mortgage limit of $750,000.

“We have the largest grand list in the state and the mortgage deduction dropped from $1.1 million to $750,000,” he said. “That impacts the $1.1 million to $1.5 million house range and sales and contracts have gone down.”

The trend many people are aware of is the decline of prices in back country, which is the are of Greenwich north of the Merritt Parkway.

Pruner said for decades “the ultimate was a big house, on a big lot in back country.”

But, post recession, he said people are seeking to live closer to town on smaller lots. “Large houses and lots are seen as expensive rather than indicators of success. People want to live in what I call ‘front country,’ the area along the Post Road and I95.”

Pruner said Greenwich Public Schools remain a strong draw for families to move to Town, and that potential buyers use websites like schooldigger.com to find a district rated excellent and work backward from that.

Pruner predicted that there will be increases and decreases in property taxes based on the change in desirability of back country versus “front country.”

“Cos Cob, Chickahominy and Byram will all see increases in taxes,” he said, adding that he expects back country taxes to drop, but not precipitously.

Another trend is that Greenwich is less of a destination for weekenders.

“Post recession, we’ve lost the image as a great place to vacation,” he said. “One third of back country are people who came out on weekends and international people.”

What is hot? North Mianus. Pruner said that unfortunately there are only 12 houses available in that section of town. Pemberwick and Byram are growing and Old Greenwich and Riverside are doing so well that the price per square foot has soared.

“Riverside, south of the railroad tracks, for well-to-do young families, is ‘the place to go,'” he said. “But it’s gotten so expensive that Cos Cob and Glenville have gotten hot as a result.”

A rule of thumb is that less than a six month supply of inventory is a seller’s market, and more than a one year supply is a buyer’s market.

There is a four year inventory of houses for sale over $10 million.

As for the rental market, last year there were 859 rentals, which is higher than condos, co-ops and house sales combined. The rental category includes everything from garage apartments to people renting waterfront properties at $25,000 a month.

Pruner said the 859 number is likely even higher because it only represents rentals on the Multiple Listing Service (MLS), and many people rent apartments priced at less than $2,000 a month through Craigslist and other ways directly to prospective tenants.

Pruner said there is a mismatch in what builders build and what buyers want.

“They build the largest, $2million to $3 million, and have trouble selling. The demand is for under $1.1million for a co-op or condo,” he said.

A large number of owners of rentals are small investment partnerships often owned by Greenwich residents, and those rentals generate $59,000,000 of income.