On Monday morning the Historic District Commission held a special meeting at 0 Strickland Rd, where an 1870 carriage house sits behind a cottage at 35 Strickland Rd.

Both structures, as well as the neighboring house at 31 Strickland, the Amos Brush House, are in the Local Historic District.

The new owner of property at 0 Strickland, Flouty Family Limited Partnership, seeks permission from the Historic District Commission to demolish the carriage house and build a new two story house. 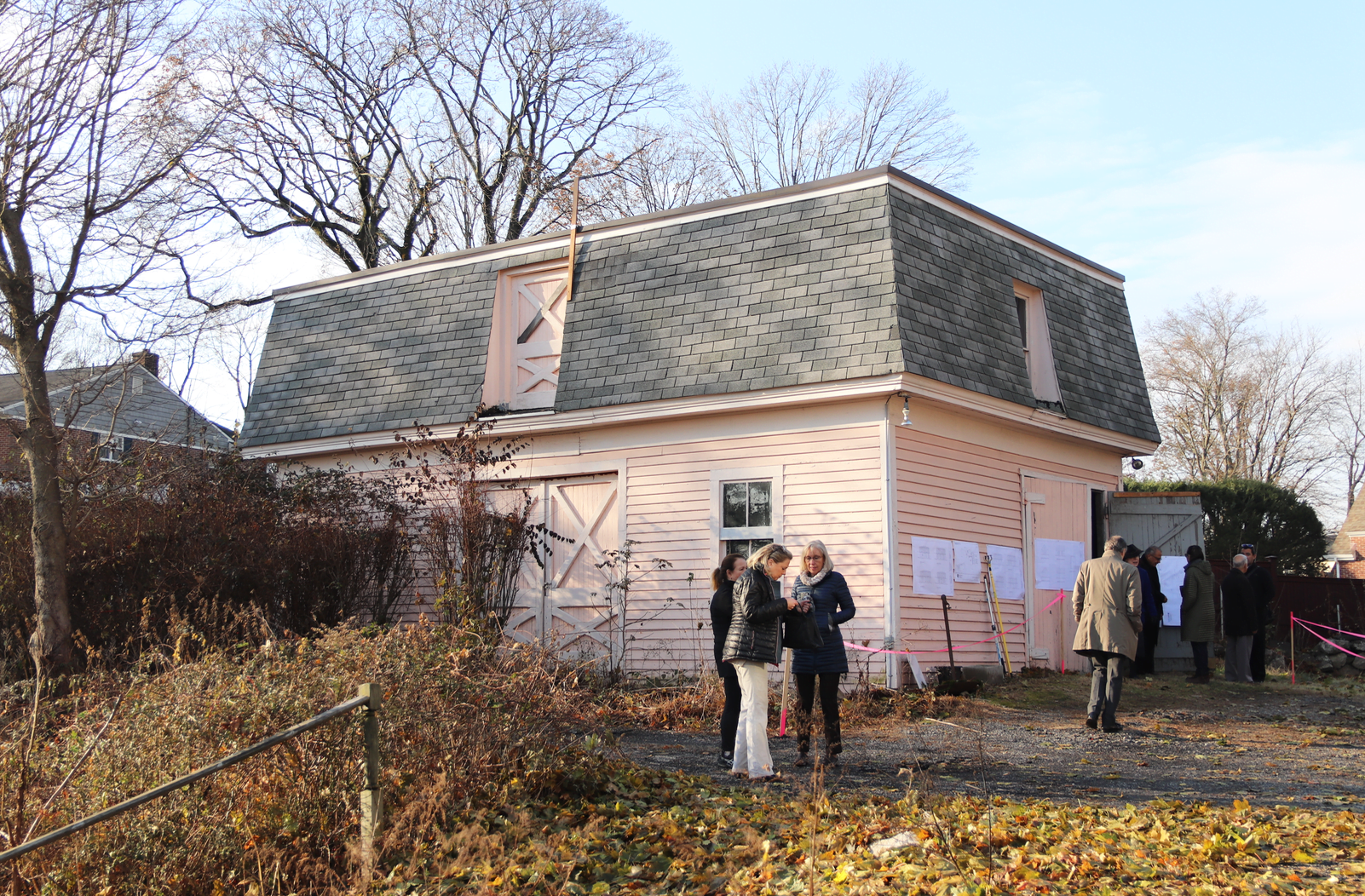 Front of existing carriage house at 0 Strickland Rd. Look close and see there is a stick attached to the roof to show the height of the proposed roof. Nov 25, 2019 Photo: Leslie Yager 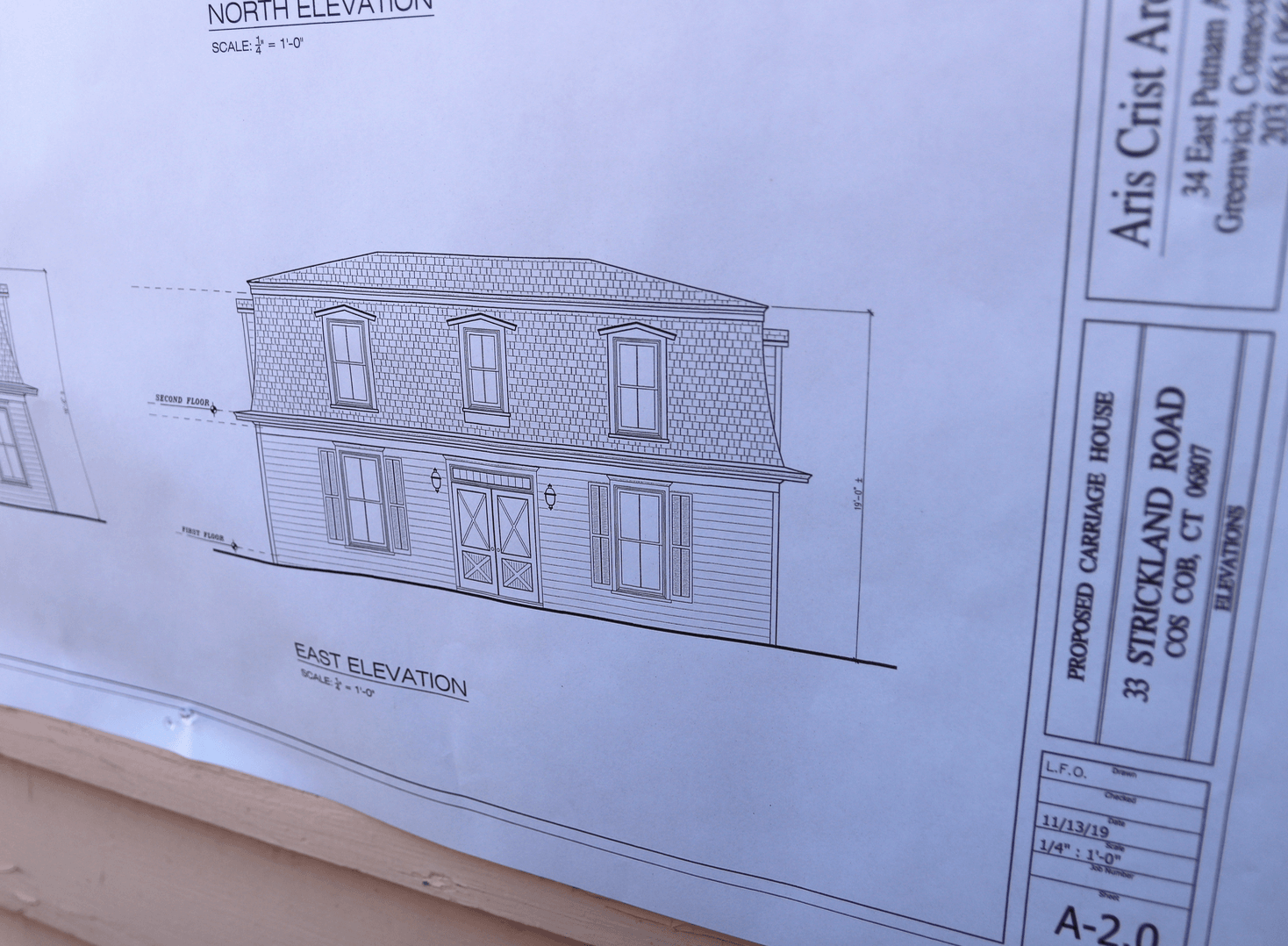 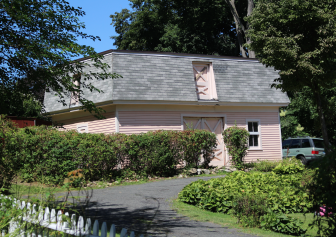 Photographed in 2015, the 1870 carriage house at 0 Strickland Rd, a subdivision of 35 Strickland, was in better condition.  Photo: Leslie Yager

GFP last chronicled the fate of this property back in 2015 when previous owners, Don and Eileen Smith said they had received permission for a lot split but couldn’t sell their property because zoning didn’t allow an ancillary structure to exist on a lot without a primary structure.

They said the carriage house had no running water, no electricity and no certificate of occupancy.

That has not changed.

“Who has the authority to preserve it? It’s not us. It’s completely murky. Our decision does not effect whether the building is demolished or not,” said then ZBA chair David Weisbrod in August 2015.

The ZBA agreed that although the lot split caused the problem, and the lot split was granted after the existence of zoning, the applicants did have “hardship” earning them the variance based on the structure predating zoning and the odd shape of the lot.

The Smiths were granted the variance by the ZBA and on Nov 29, 2018 the  Smiths sold the property to Flouty Family Limited Partnership for $1,050,000.

Fast forward to Nov 25, 2019. The HDC members all had a chance to inspect the carriage house in person. 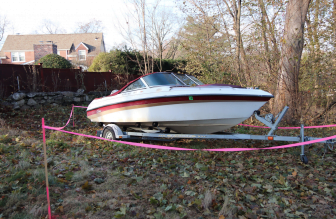 Inside the pink tape is proposed site for a single car garage at 0 Strickland Rd. Photo: Leslie yager

With George Flouty on the property were a builder, local realtor Mark Pruner who is a consultant on the project, attorney John Heagney and surveyor Mike Finkbeiner.

Architect Aris Crist, a member of the HDC who has been hired by George Flouty, was not allowed to come.

Mr. Pruner explained that proposed is a one car detached garage, and a house that would be increase in height to include a small ridge in order to insulate the house. Also, the house would have a bigger footprint, with it extending further at the front and back than the existing carriage house.

The applicant listed challenges to the carriage house, including that it has no crawl space, no insulation, no utilities, no basement. They said the windows are few and in poor shape and floor, walls and barn doors need much repair.

They also said it has no historical significance.

Mr. Flouty said the proposed house would be similar to the Amos Brush House next door.

“The poor guy who built the mansion (Amos Brush), ran out of funds and built this (carriage house) as a temporary thing hoping his business would recover, but there was a financial downturn around 1873 and eventually he lost his house and never got round to it,” he said, adding that the Amos Brush house is similar to the Tomes-Higgins House, and that the inspiration for the new house was the Tomes Higgins carriage house. 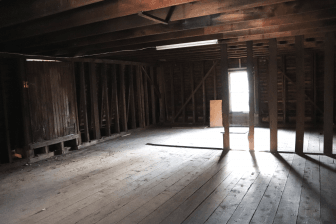 Second floor of the carriage house at 0 Strickland Rd has a ceiling that is 7′ 4″ high. Photo: Leslie Yager

Asked if he planned to live in the house he hopes to build, Mr. Flouty said, “I don’t know if this will be my daughter’s home. She lives in Manhattan with 3 little kids. My wife and I would like to entice her to move. This is walking distance to the schools and train. We live in Riverside so we could come and babysit, but there are no guarantees in life.” 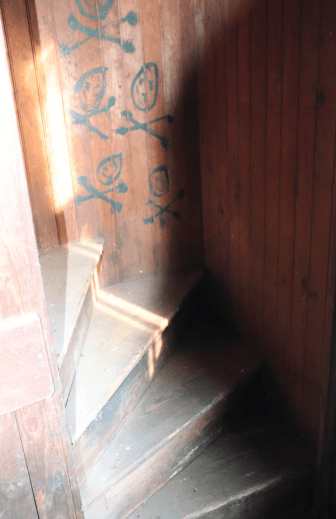 Steep steps up to the second floor of the carriage house at 0 Strickland Rd.

Mr. Flouty said his engineer described the foundation as crumbling and that multiple spots were excavated, revealing it had been patched up, and the wood floor sits on joists but is sitting on dirt in some places.

He said the second floor, accessed up a steep flight of stairs is not up to code in terms of height.

Attorney John Heagney said HDC member Darius Toraby, who resides next door in the historic Amos Mead Brush house (1873), should recuse himself from both the hearing and vote because his personal interest might reasonably conflict, and because he had bid on the property himself.

After the site visit, Darius and Faith Toraby, interviewed in their Second Empire style, “Amos Brush House” next door had a different perspective.

Having lived in ‘The Dame of Cos Cob’ for 28 years, they said they have been devoted to their caretaker roles. 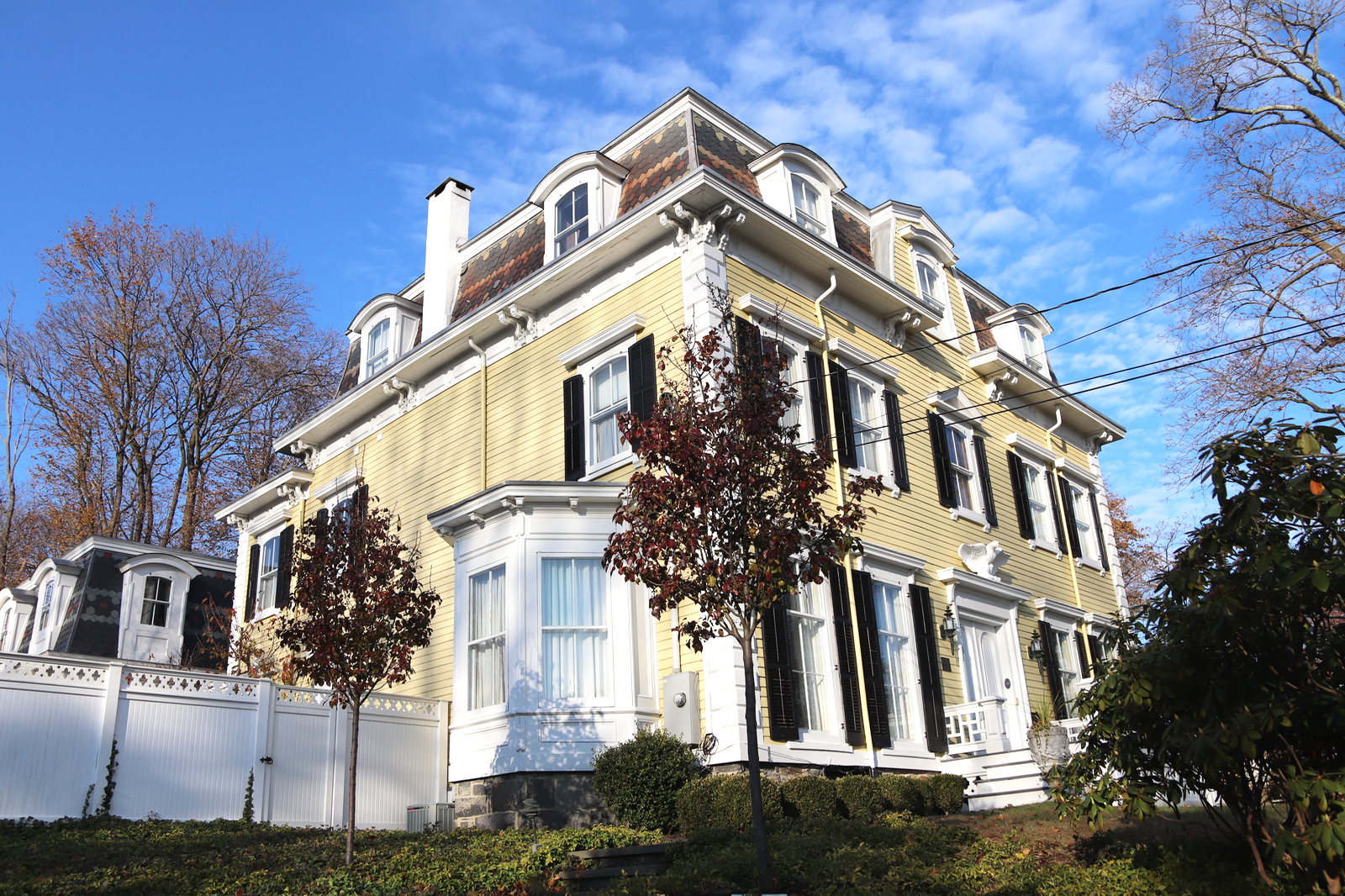 When they added a garage, it was deemed a historically sensitive addition, and Mr. Toraby received The Greenwich Historical Society’s Preservation Award for the project in 2012.

“It takes commitment to own a house within a historic district, and if you buy here you should have the philosophy of not maxing it out for profit,” – Faith Toraby

“There is no basis for recusal,” he said.

Mrs. Toraby, an attorney herself, said the town attorney had been consulted.

“There are two reasons for recusal,” she said. “One is if there is perceived profit or loss of money or property value. The property is in such distress that any kind of improvement would increase its value.”

“Second involves personal animus,” she continued. “We actually stood up before the HDC and said how lovely they were (Mr. and Mrs. Flouty) and that we supported them fully for a detached garage. What remains is a philosophical difference.”

“When Mr. Flouty bought the property last year he called me at my office and I called back and he said he had purchased the house in front for his daughter and would add water and electricity in the back (the carriage house) and make minor adjustments,” he recalled. “He said, ‘Can we talk about it?’ I said I could not discuss HDC decision making. He said, ‘You’ve done an addition and you are a restoration architect. I’d like you to do the design.’ I declined and said it would be a conflict of interest.”

Mr. Flouty wound up hiring Aris Crist who is also a member of the HDC.

As for the fact they live next door, Mr. Toraby said there is a Town ordinance requiring one or more members of the HDC to be residents within one of the town’s historic districts.

Faith Toraby, who was previously an 11 year member of HDC herself, said the carriage house was in poor condition due to neglect.

“The problem with living in a historic district is you can’t force people to maintain their properties,” she said, adding that the only sanction is to halt work being done without a Certificate of Appropriateness. “There is no teeth to make someone keep their home in good structural condition.”

She said while the carriage house has no plumbing, running water, certificate of occupancy or electricity, somewhere along the line a previous owner ran an extension from the cottage in front and buried the line.

Mr. Toraby, who is an engineer and architect, said the HDC is all about “restore and maintain.”

He said the existing carriage house could have a fully code compliant foundation using the under pinning method and avoid demolition.

“They could get a variance from the building department to finish it and not raise it 17 ft to 21 ft,” he said. “It’s extremely charming.”

Mr. Toraby also said replacing a 1,200 sq ft carriage house with a 2,400 sq ft house with 3 bedrooms and 3.5 bathrooms would be out of proportion.

The Torabys said the driveway was originally part of their property but previous owners of their house, the Wards, sold it to the Smiths who wanted it so they would have more FAR.

“The Wards received a deeded easement by necessity for the driveway,” Mrs. Toraby said.

She said the only time she and her husband bid on the property next door was three years ago, long before Mr. Flouty purchased it for $1,050,000, so any suggestion that they bid against Mr. Flouty was unfounded.

“Three years ago we had an accepted offer at a much higher price – several hundred thousand dollars,” Mrs. Toraby said. “I was already seated with the lawyer Lorraine Slavin when my realtor Carolyn Anderson got a call that the deal fell through.”

Mrs. Toraby said the buyers’ subsequent deal also fell through, and the property was again available. Prices had come down, but the Torabys were no longer interested in buying the property.

They said after Mr. Flouty bought the property last year he offered to sell them back the driveway, but they declined.

“I want to be clear, there was discussion about purchasing the driveway back,” Mrs. Toraby said. “No dollar amount was discussed and no offer was made. We decided at our stage of life we didn’t need to make that kind of financial commitment for something we had the right to use.”

Mr. Toraby said while many applicants before the HDC receive opinions that are “advisory” to P&Z, because this is in a Local Historic District, HDC will make the final decision whether to approve the demolition, not P&Z. He said if the applicant is dissatisfied their next step would be to go to court.

A call on Monday to Debra Mecky, director of the Greenwich Historical Society, for comment was not returned.

The 0 Strickland Rd application is tentatively on the HDC agenda for Dec 11, 2019. 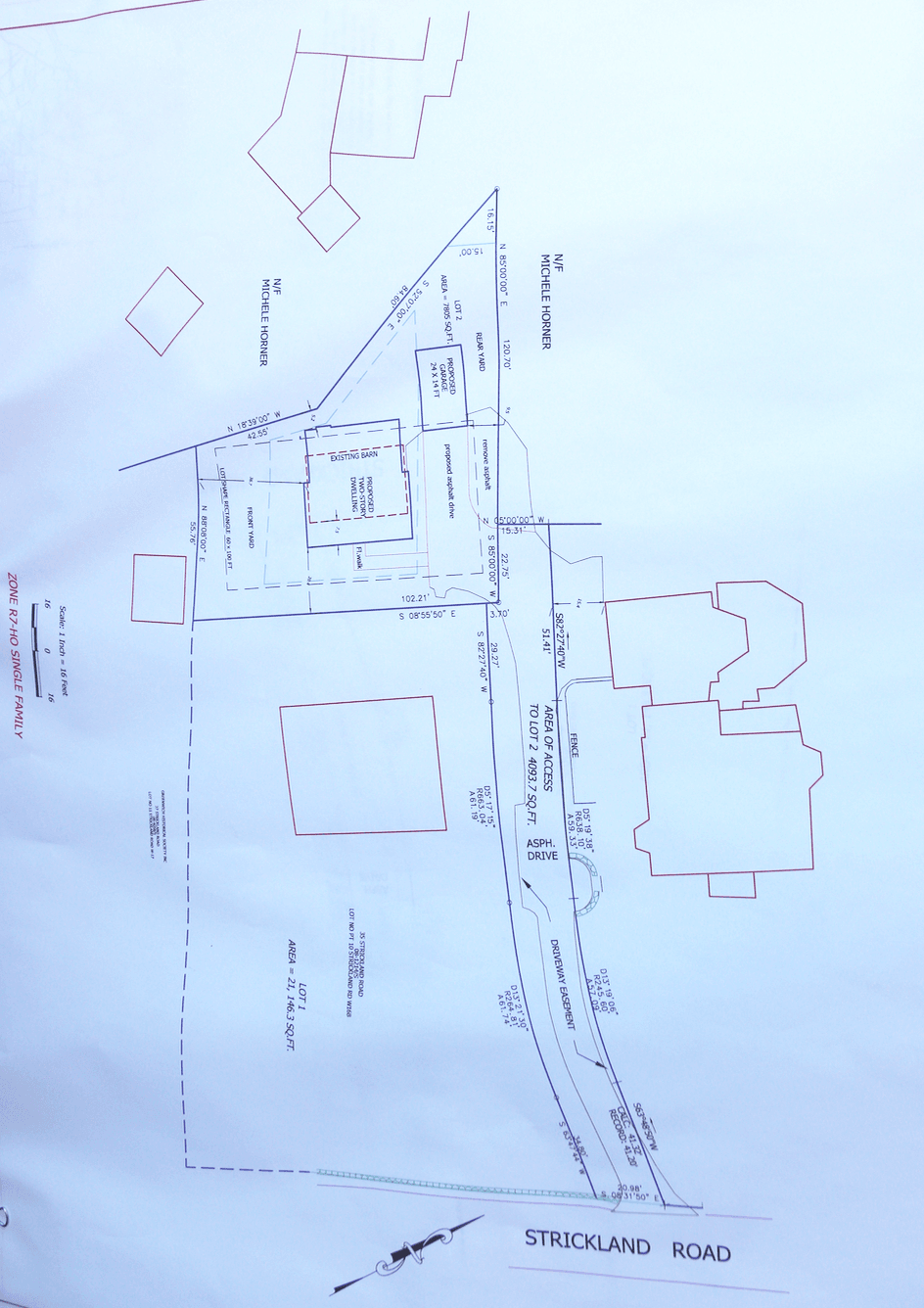