The clambake pavilion at Tod’s Point was packed on Sunday for the Republicans annual clambake.

The tally of RSVPs was 200, but 25 additional people attended, bringing the tally to 225, precisely the same as the attendance at the Greenwich Democrats picnic a week earlier.

While the Democrats talked about gun violence, election interference and sending a message to Donald Trump, the Republicans focused on Connecticut’s sorry finances under Democratic leadership, and concern that continued Democratic control of the Greenwich BET will result in higher local taxes and debt.

“For decades Republican leadership has made Greenwich a premier destination live in, to work in and to retire to – with great schools, town services, town parks and of course, low taxes,” said RTC chair Rich DiPreta. “Unfortunately the policies of the Democrats in Hartford have put Connecticut on the precipice of financial ruin. Residents continue to leave our state, and what do the Democrats do? More taxes and more spending.”

Candidate for First Selectman Fred Camillo, who is in his 6th term as State Rep for district 150, said Greenwich Republicans should take nothing for granted.

“The past couple years we’ve taken it on the chin a little bit,” Camillo said referring to State Rep Mike Bocchino’s loss to Steve Meskers for 150th district and State Senator Scott Frantz’s loss to Alex Bergstein in 2018 and Tod Laudonia’s loss to Howard Richman as Tax Collector.

“We are from Greenwich, for Greenwich.” – Fred Camillo

Camillo said he was proud of the Republican slate of candidates. “There’s no scandals there,” he said. “There’s no front page articles. …We are from Greenwich, for Greenwich.”

“They want to take the one thing that has distinguished Greenwich – the pay-as-you-go and modified pay-as-you-go system, and change the debt policy and make it go to longer term,” Camillo said. “I’ve served in Hartford for 11 years and I don’t want to see our Town become another Hartford. One hundred years ago Hartford was the wealthiest city in the country.” 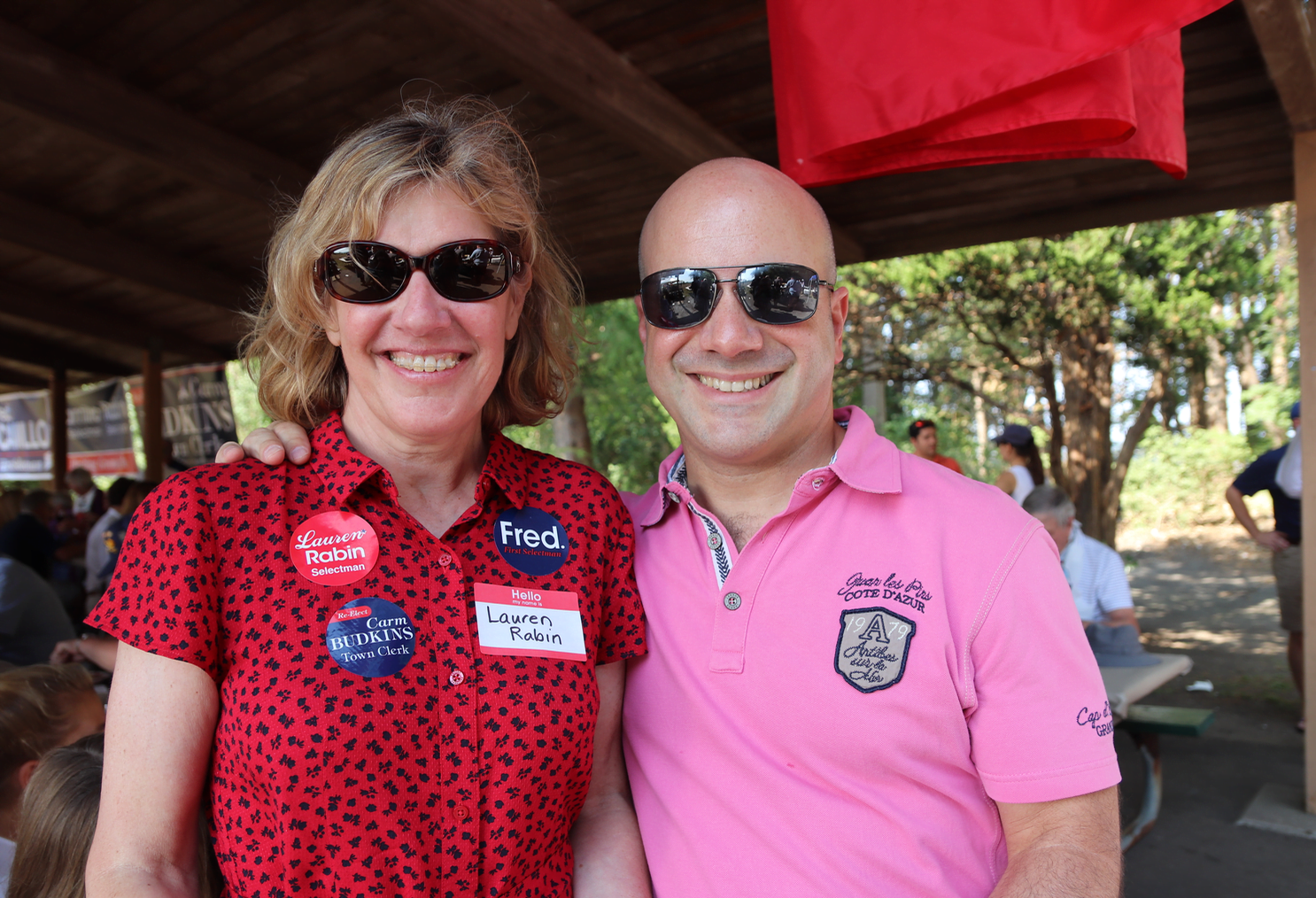 Candidate for Selectman Lauren Rabin said, “We are Greenwich grown. We know Greenwich and we care about Greenwich. We’re not doing this because we want to be political; we want to serve the town that gave so much to all of us.”

“Our opponents are organized and well funded from personal pockets and they out to take over our Town and turn it into a direction we don’t want to go in,” she added.

Rabin said she and Mr. Camillo are the same age and have known each other since they were 10 years old, both graduating from GHS in 1980. 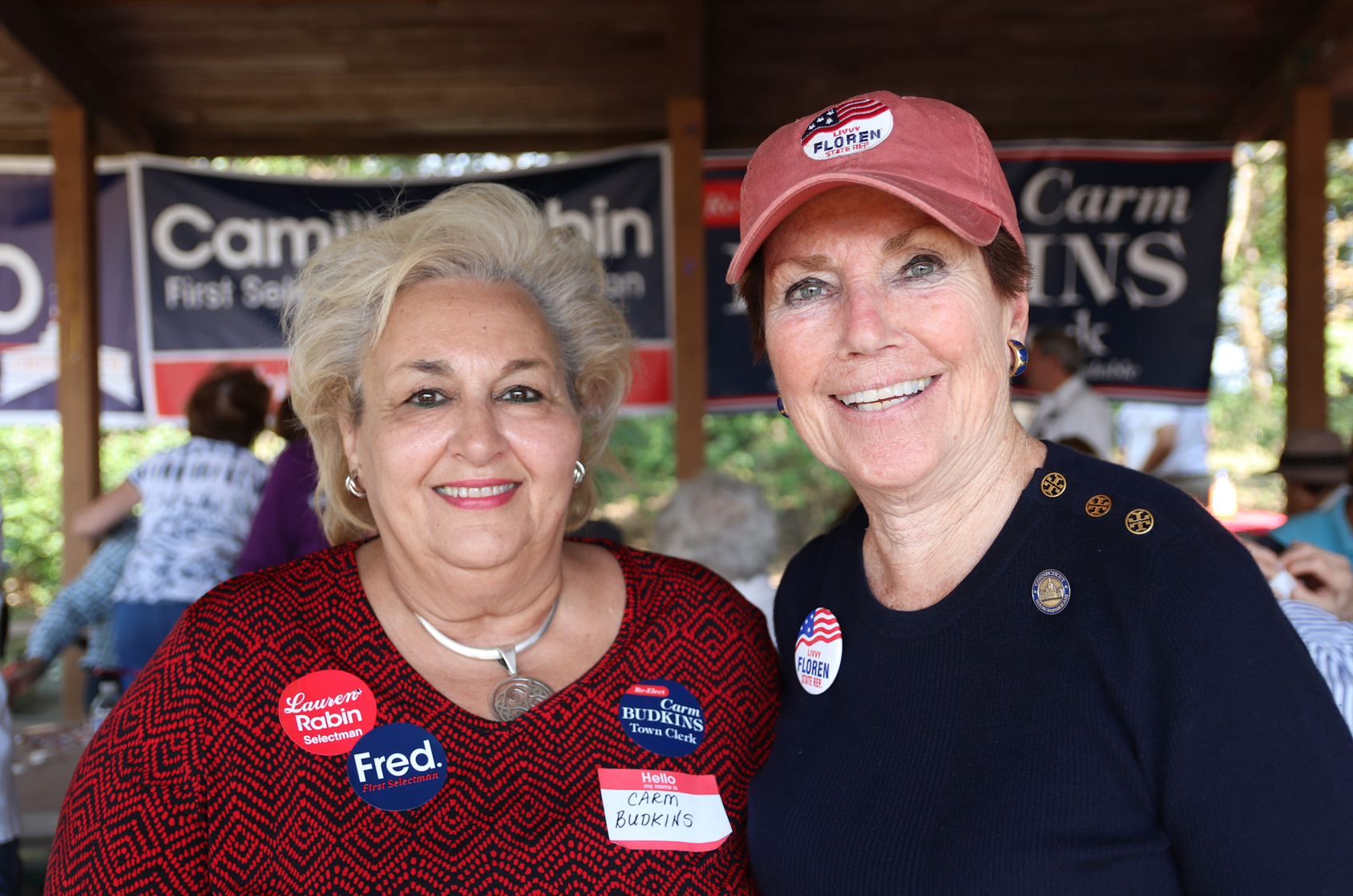 Carmella Budkins who first ran for town clerk in 1991, said, “Everyone has been wonderful, including a lot of Democrats. The win for us will be the win for the whole Town of Greenwich.”

“I love my job,” she said, adding, “United we stand. United we campaign. United we win on Nov 5.” 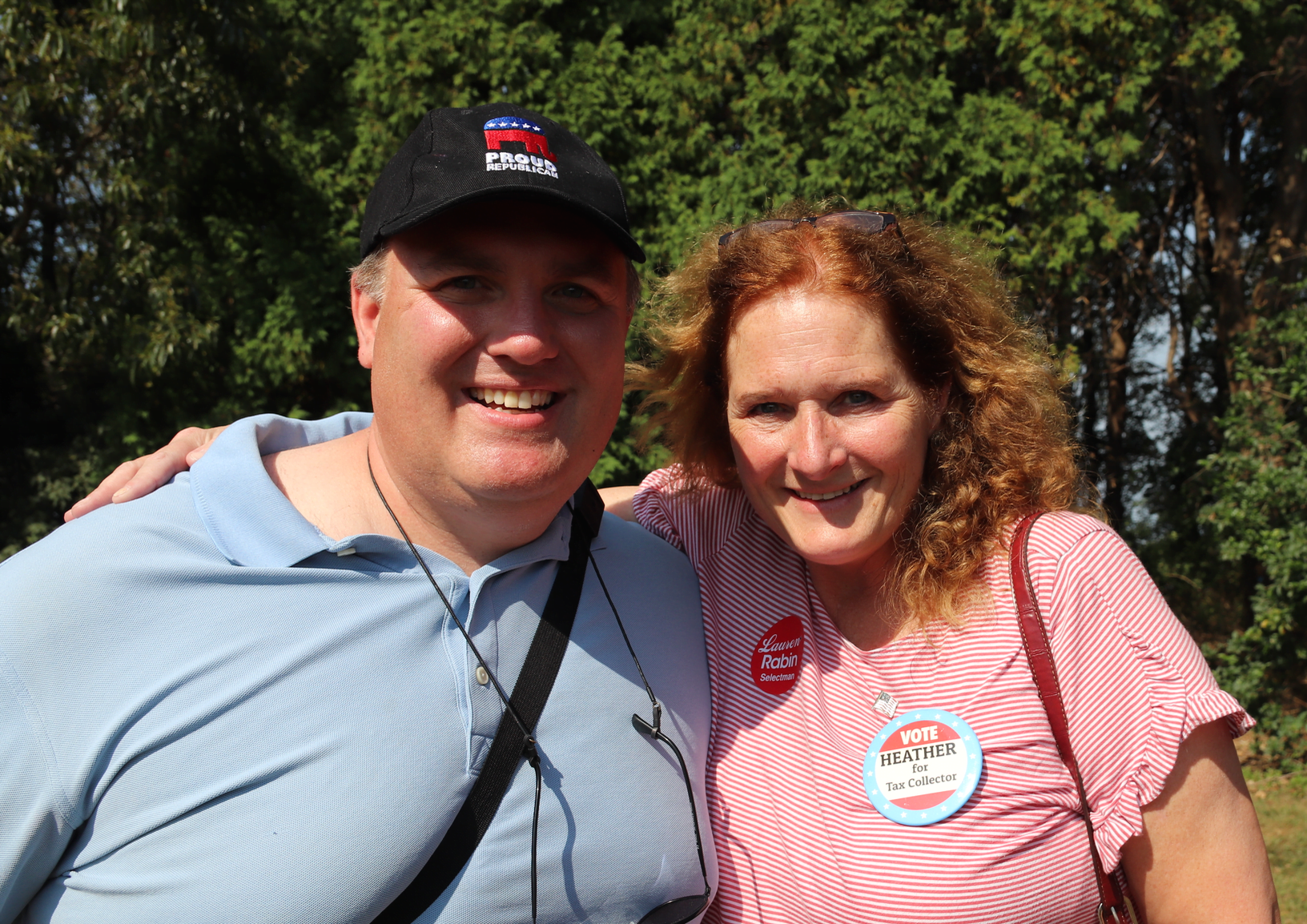 Candidate for Tax Collector Heather Smeriglio said she is qualified to run that office, which is established by state statute, because she has the experience working in the department, and has the tax collector certification.

She said if elected she would work with other Town departments – specifically the assessor’s office and fiance department.

Quoting President Ronald Reagan in 1984,” Smeriglio said, “‘If we trust in Him, keep His word, and live our lives for His pleasure, He’ll give us the power we need—power to fight the good fight, to finish the race, and to keep the faith.'” 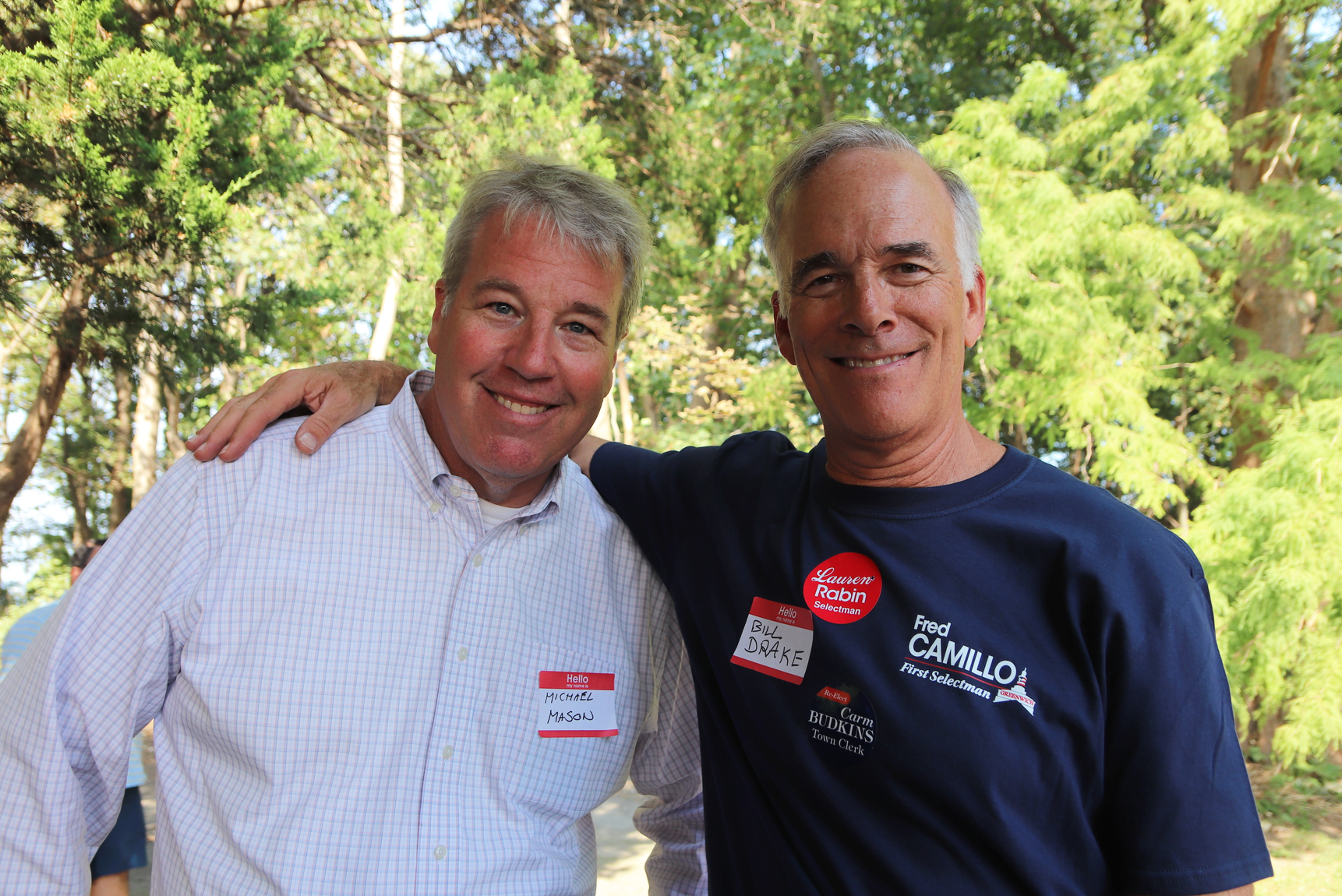 BET member and former chair Mike Mason said the Republicans on the board work well together and warned that a continuation of a Democratic led BET would result in tax increases and extended borrowing.

“You need to ask your constituents what made Greenwich the place to live, work and raise a family?” he suggested. “Our low mill rates always were at the top of the list.”

Without mentioning her by name, Mr. Drake quoted Jill Oberlander’s speech at the Democrats nominating meeting in July, saying, “We’ve been thoroughly disappointed by the failure of local Republican leadership to call out the utter breach in standards, discourse and respect for the institutions of democracy. Every day, there’s another story that wrenches one’s heart and soul.”

“That’s a crock of ___. Republican leadership – that’s you and me who are being slandered,” he warned.

Drake said the $1,000 SEEC fine on each of the Democratic BET members for violations in the 2017 election was important and offered copies of the three local news outlets coverage, Greenwich Time, Greenwich free Press and Greenwich Sentinel.

He said Monday night (Sept 23) the Republican board members put the SEEC fines on the BET agenda for discussion.

“The BET is going to consider creating a subcommittee to see whether the violation of the law in the BET election by all the Democrats who are running now – whether the BET should do anything about the violations,” he said.

“Should we at the BET act on this or not? Should we help Freddie by Bringing up Jill’s violation?” he asked. 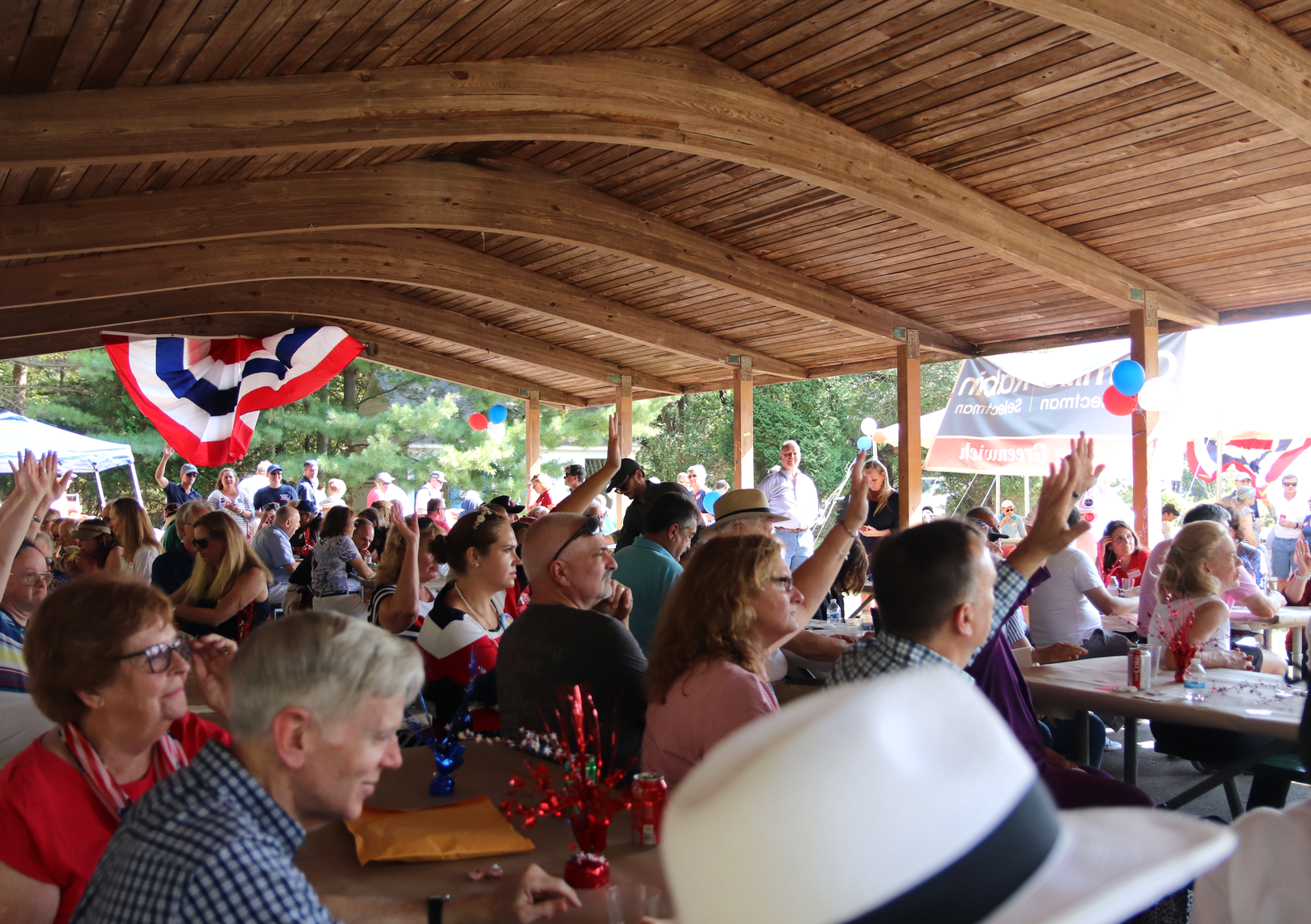 Bill Drake asked for a show of hands whether Republicans on the BET should bring up the SEEC violations of Democratic BET members during the next meeting. Sept 22, 2019 Photo copyright: Leslie Yager

RTC Chair DiPreta said the November election is important because whichever party has the most cumulative votes not only gains the chairmanship of the BET.

“Vote for all six of them so we can retake control of the BET which we lost for the first time in a very long time,” he said. “It’s not just who is chair but it’s the tie-breaking vote.” 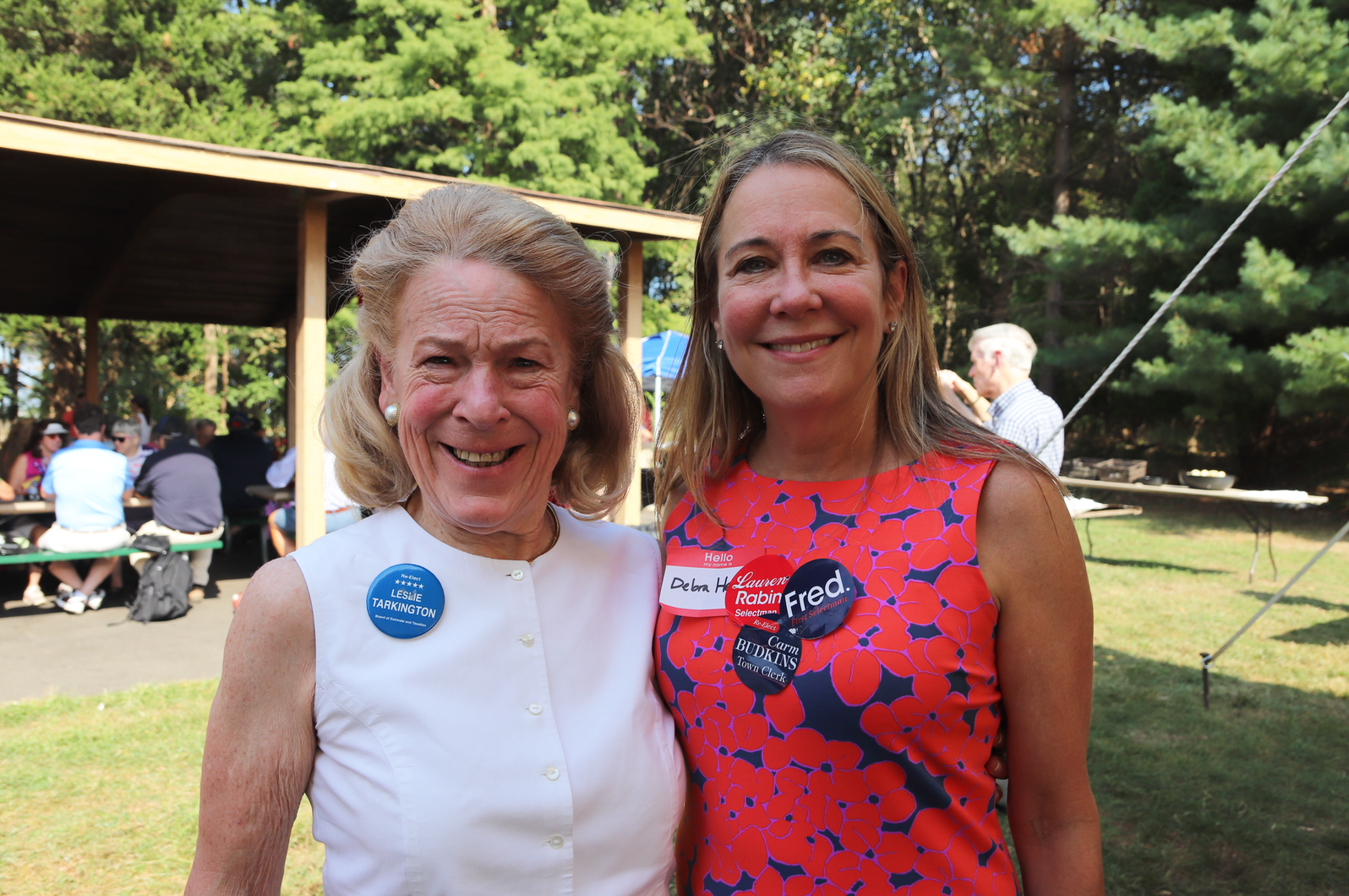 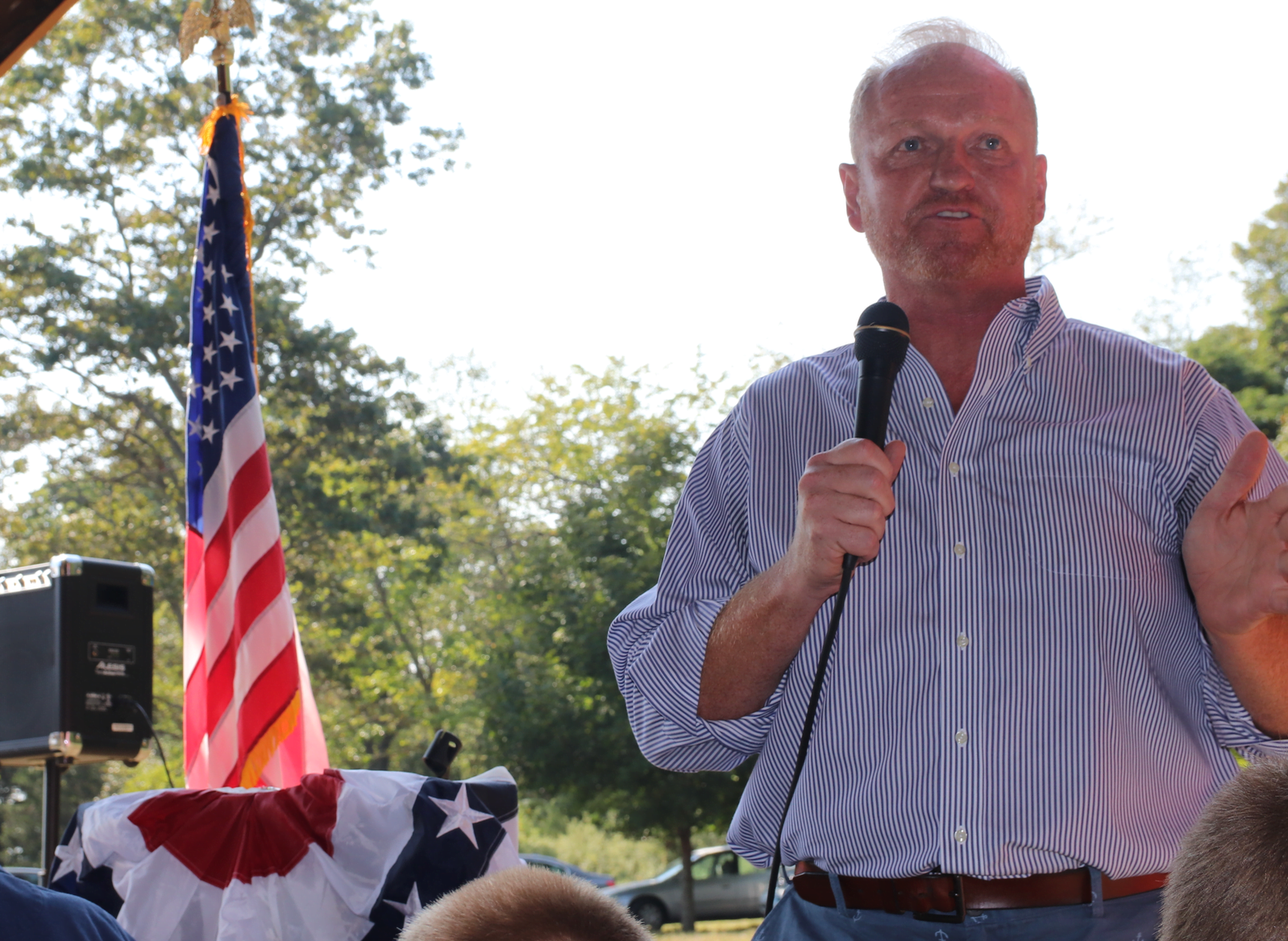 Joe Kelly, candidate for Board of Education at the clambake at Tod’s Point. Sept 22, 2019 Photo copyright: Leslie Yager

Candidate for Board of Education Joe Kelly, a longtime GHS rugby coach who this week resigned, said he had never run for office before.

Kelly said he is often asked how his team always wins.

“We don’t always gets the gifted athletes every year,” he said. “It’s a structure. Professionally, I was able to motivate and organize businesses, I had a relatively successful business career, freeing me up to volunteer my time. How can we work as a team to win this election? With Fred at the top of the ticket, all the way through the ticket – it’s not just about the candidates, it’s the players, it’s the coaches, the members of the committees, the members who go out and talk to the neighbors. It’s the community. This is how a team wins – everybody working together year after year.” 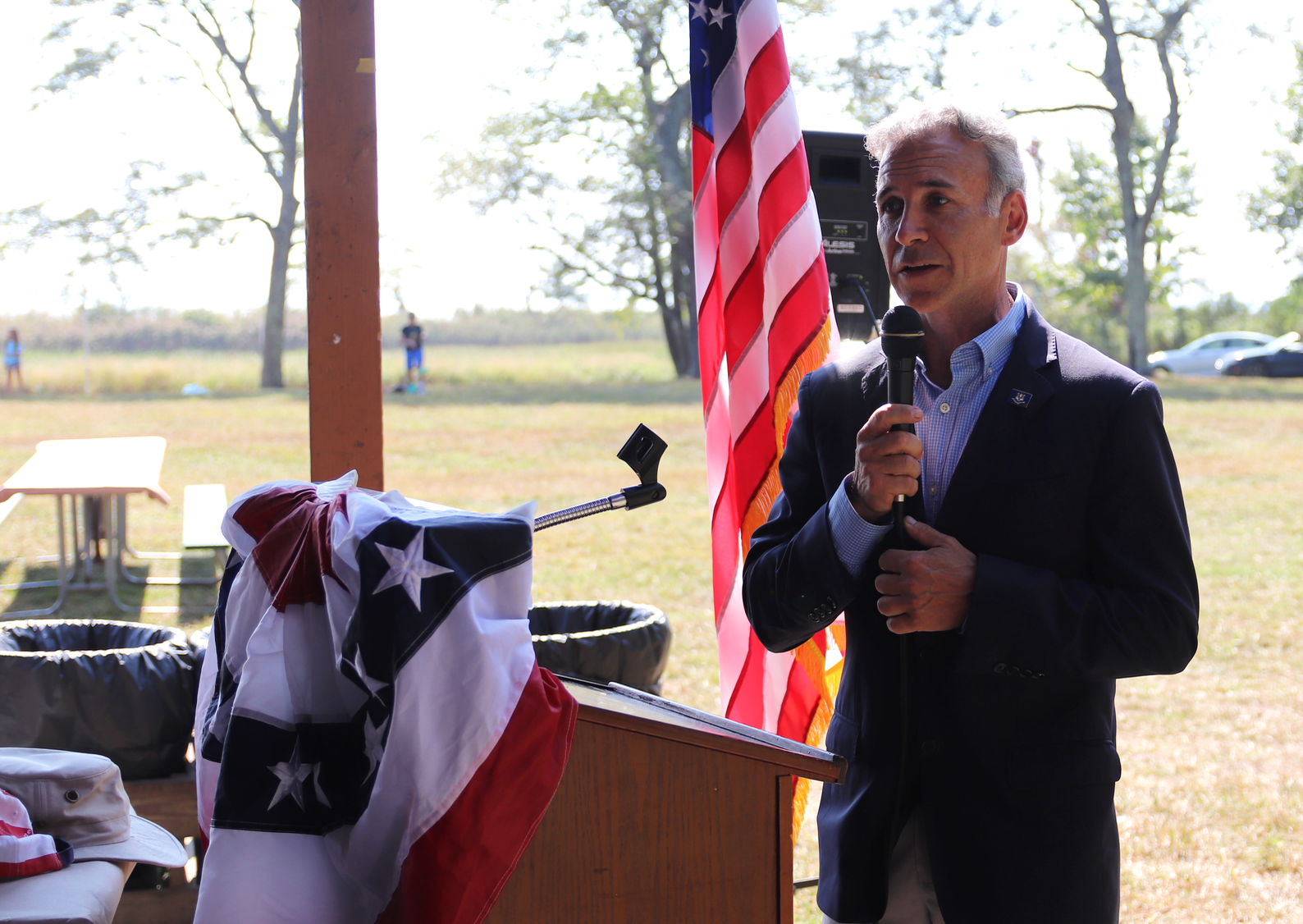 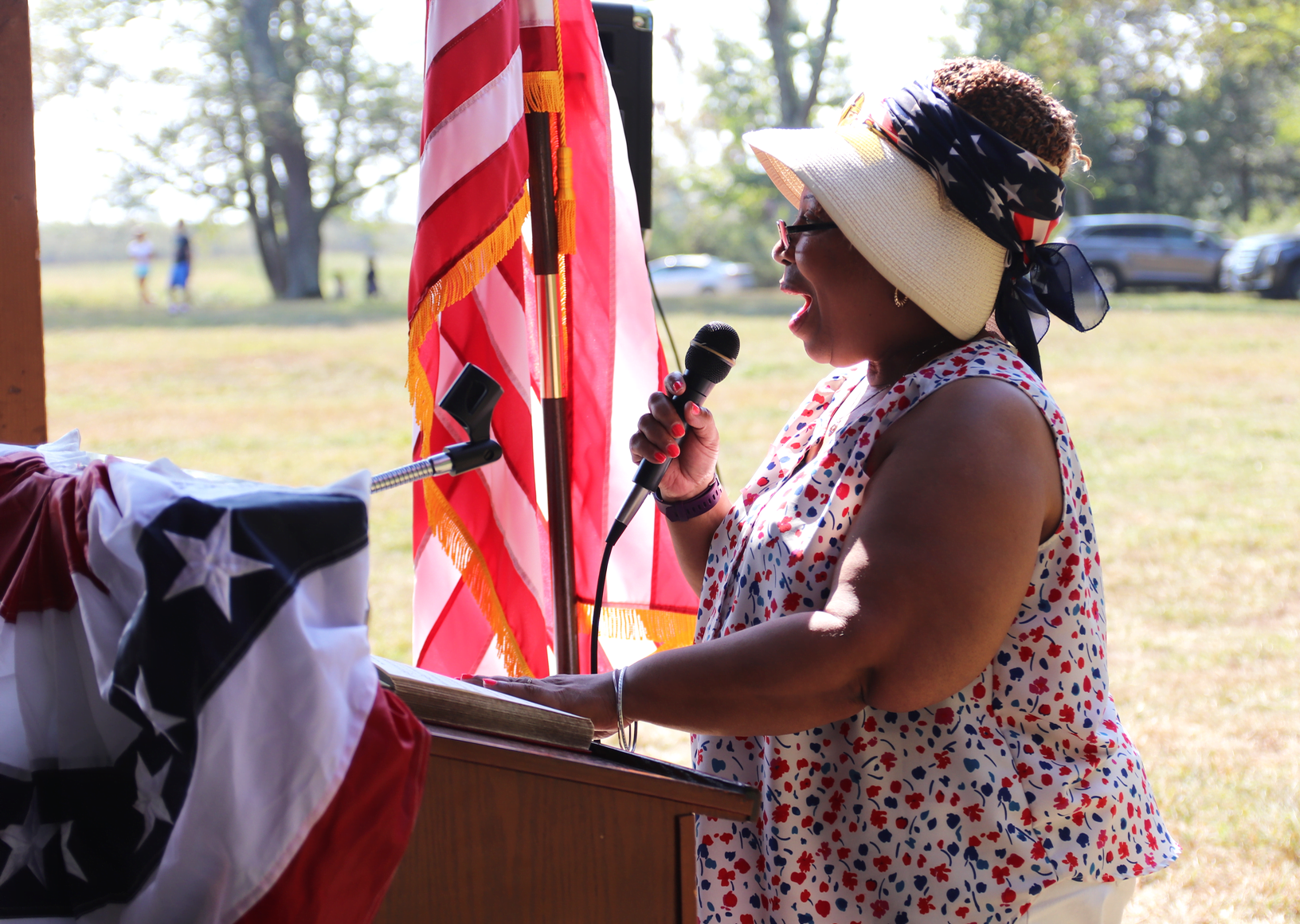 Ruby Durant, assistant registrar for the Town of Greenwich, leads the crowd at the Republican clambake in the National Anthem. Sept 22, 2019 Photo copyright: Leslie Yager