Did it come to anyone’s surprise that Connecticut roads were recently named “worst” in the US in a White House study conducted by the American Society of Civil Engineers?  They told us what we already know:  41% of Connecticut’s 21,000 miles of highways are in “poor” condition and 30% of our 4200 bridges are “structurally deficient”.

Speaking of which… how about our Governor, Dannel Malloy, whose aspirations for a job in the Clinton administration have him favoring political pandering instead of public policy.

Two years ago US Transportation Secretary Anthony Fox visited Hartford when Foxx was seeking support for the President’s transportation plan. At a press conference, the Governor joined the assembled Congressional delegation (all Democrats) and was quick to beat up on the Republicans in Congress for stalling progress.  But when a reporter asked about having Connecticut help pay its own way with highway tolls, the Governor reacted as if he’d found a turd in the punch-bowl.

“We are a non-toll state,” he insisted. “They (tolls) are not actively in consideration.” 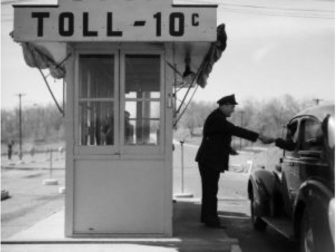 Did the Governor not know that weeks earlier his own Dept of Transportation held two major seminars as part of a study on managing traffic congestion by using tolls?  The panels in Bridgeport and Hartford brought in traffic experts from Miami, San Diego and Seattle to sing the praises of “value pricing” our highways.

Why do another study on highway congestion problem that’ve been plaguing us for decades?  Because it’s always easier to “study” a problem than actually do something about the problem.

Make no mistake: our CDOT is engaged in a PR blitz to sell motorists on tolls while politicians won’t touch the issue.  Nobody running for state office this year has the guts to tell voters that tolls or taxes are necessary and will be implemented as gas tax revenues fail to pay for needed road repairs.

But aren’t we already paying tolls?  Not with EZ-Pass, but in car repairs. 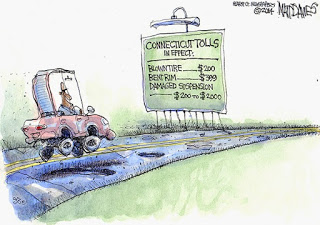 That’s why I loved the recent cartoon by Connecticut’s own Matt Davies entitled “The Road More Traveled”.  It shows a jalopy bouncing along a pot-hole covered highway as the driver spies a sign reading “Connecticut Tolls in Effect:  Blown tire $200, Bent Rim $399, Damaged Suspension $200 to $2000.”

Let’s be honest with ourselves. There is no “free lunch” and there is no free ride.  Maintaining our highways is expensive and those costs should be borne by those who drive on them.

Can’t we find a politician honest enough to tell us that truth this election year?

JIM CAMERON is founder of the Commuter Action Group. A resident of Darien for 25 years and a member of the Darien RTM, Jim previously served as chairman of the CT Rail Commuter Council. The opinions expressed in this column are his alone. See the full collection of his Talking Transportation columns. You can reach Jim at [email protected]