A redevelopment of the property at 62 mason Street where a developer, Albert Orlando of Orlando Development Company, intends to demolish a house built in 1890 to replace it with a 3 story, 7 unit building under section 6-110, which is the town’s workforce housing regulation. Two of the 7 units will be moderate income. The application is on the Planning & Zoning Agenda on Sept 4. 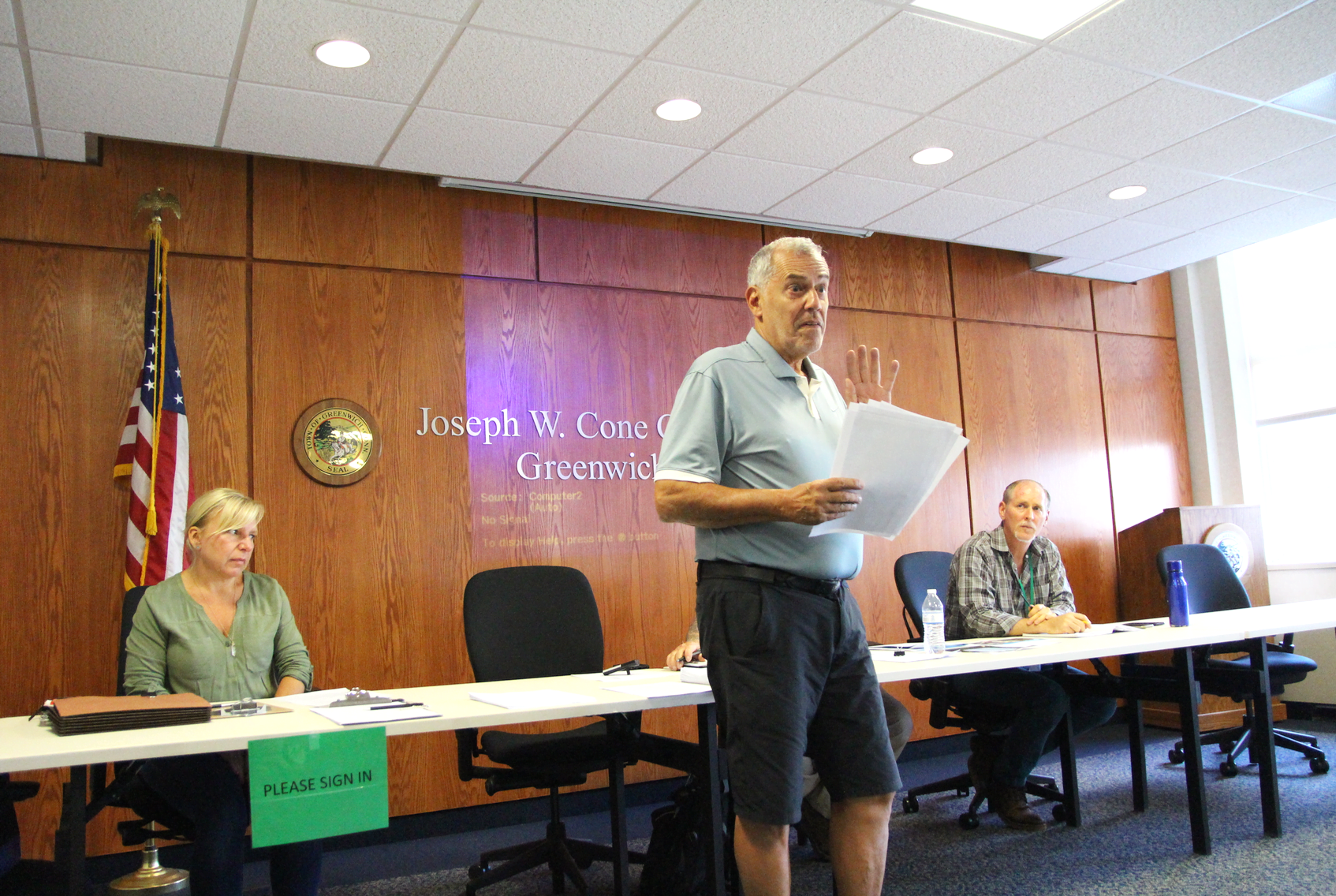 Albert Orlando appeared at a tree hearing on Aug 20 at Town Hall. He wishes to demolish the 1890 house at 62 Mason Street and have the Town remove a mature London Plane tree so he can install a 22 ft wide entrance to an underground garage for 16 cars to park. Photo: Leslie Yager

This week the tree warden Steve Gospodinoff held a hearing at town hall on the fate of a town tree, a 25-year-old London Plane that is about 30 ft high, that Mr. Orlando wishes to cut down to make room for a 22 foot wide driveway for 16 cars to access underground parking.

“It’s not a 10 foot driveway. It’s a 22 foot driveway because the garage will be under ground, as many are in Town including The Modern (the large development going up next door to Town Hall) and Beacon Hill around the corner,” he said.

Mr. Orlando said the project at 62 Mason Street will be his fifth project  in downtown, for a total of over 30 units, including three gated communities on East Elm Street.

“We tried everything imaginable to save this tree,” he said, adding that the landscape architect L Wesley Stout of Wesley Stout Associates in New Canaan said that angling the driveway would create potentially unsafe turning radii and sight lines, and that working around the existing tree without substantial damage is not possible.

Also he said it was not possible to locate the driveway to the south without “large, dramatic” retaining walls.

He said he’d been to three meetings with the Architectural Review Committee and that the P&Z commission entertained the application a few weeks ago.

“We originally submitted it with the driveway to the south and they asked us to investigate a driveway with an alternative location because the stone walls that would have to built on so side were too “large and dramatic,” he explained

“Even if we shifted the driveway to the north, the tree would be in grave jeopardy,” he said.

Orlando said he would replace the London Plane tree with one recommended by his landscape architect who wrote in a letter Orlando shared, “We are open to the species and size but would expect it to be Maple, Oak or Sycamore at roughly 3- 3-1/2-inch Caliper, or as directed by the Tree Warden.”

“It’s a whole streescape and it nestles into all the others at the same height,” said Isabel Malkin.

Dr. Greg Kramer, Superintendent of Parks & Trees, asked about the plans for a Magnolia on the property, noting that is likely was as old as the house, which dates back to 1890.

“I believe there is historical importance in protecting it. Can you show a landscaping plan to protect that tree?” Kramer asked.

“I’ll speak to my landscape architect about that,” Orlando said.

“We’re doing everything imaginable to preserve the magnolia,”  Orlando added.

Francia Alvarez of the Greenwich Tree Conservancy said, “All over town we see developers come in and keep some of the trees and don’t practice low impact development. When they run the power and utility lines, they go right through the tree roots. That’s why the trees look good when the properties are first sold, but then die after a couple years.”

“We’ll protect them before we do anything,” Orlando said. “The beauty of the project it is one building. There will be one outlet for sewer, one for gas, and one for underground electric – away from the trees.”

“Will it go through the critical roots of the canopy?” Alvarez asked.

“I can’t say but, my reputation with trees is well known in this town.”

Alvarez said she previously worked at the corner at Lincoln Ave and Mason Street and her window looked out over that streetscape.

“It was beautiful and I could walk along that shady street at lunch. And I could watch the leaves change color in the fall. It’s beautiful. …If you were to go forward and take the tree down to put in a large tree, it makes sense. A small caliper will compete for the sunshine. It needs to be a bigger tree.”

Isabel Malkin said she was brokenhearted to see the tree cut down.

“Society is changing, but the trees have been there forever. That whole street has such a lovely feeling. It’s heartbreaking to see trees like that being taken down. Why can’t we protect that as well as continue development? It’s just very sad. That’s all I have to say.” – Isabel Malkin

JoAnn Messina, chair of the Greenwich Tree Conservancy said she wished the tree warden could come into the process earlier. 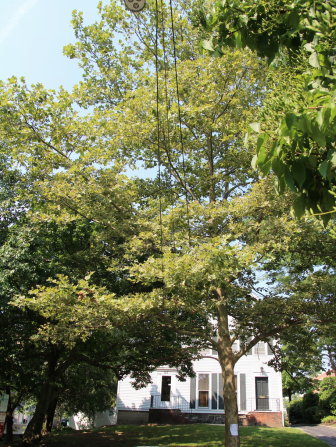 A developer seeks to cut down a Town owned London Plane, planted 25 years ago, at 62 Mason Street in order to make way for a 22 ft wide driveway at a new 7-unit building. Photo: Leslie Yager

“Clearly the plans can be redone,” she said. “On Church Street a similar situation was occurring, and the developer posted the tree because of a driveway and curb cut. The driveway was changed and the buyer never even knew it had been posted. He loves that the tree was saved. The rendering of this would look much better if there was green in front of it.”

Messina said the Greenwich Tree Conservancy would like to maintain trees in this area of downtown.

“The town and GTC have specifically tried to plant trees in the downtown area because we are losing mature trees in far greater number than we are planting. And we are planting at 2- to 3- inch caliper trees to give them a try to get used to where they are planted.”

“There has been so much development, and it will continue. We start to lose systemically all the trees on the street. It’s not just Mr. Orlando, but other developers who will try to build affordable housing. It’s not just the one tree,” Alvarez said.

Mr. Gospodinoff closed the hearing to public comment and said he would issue his decision in three business days. 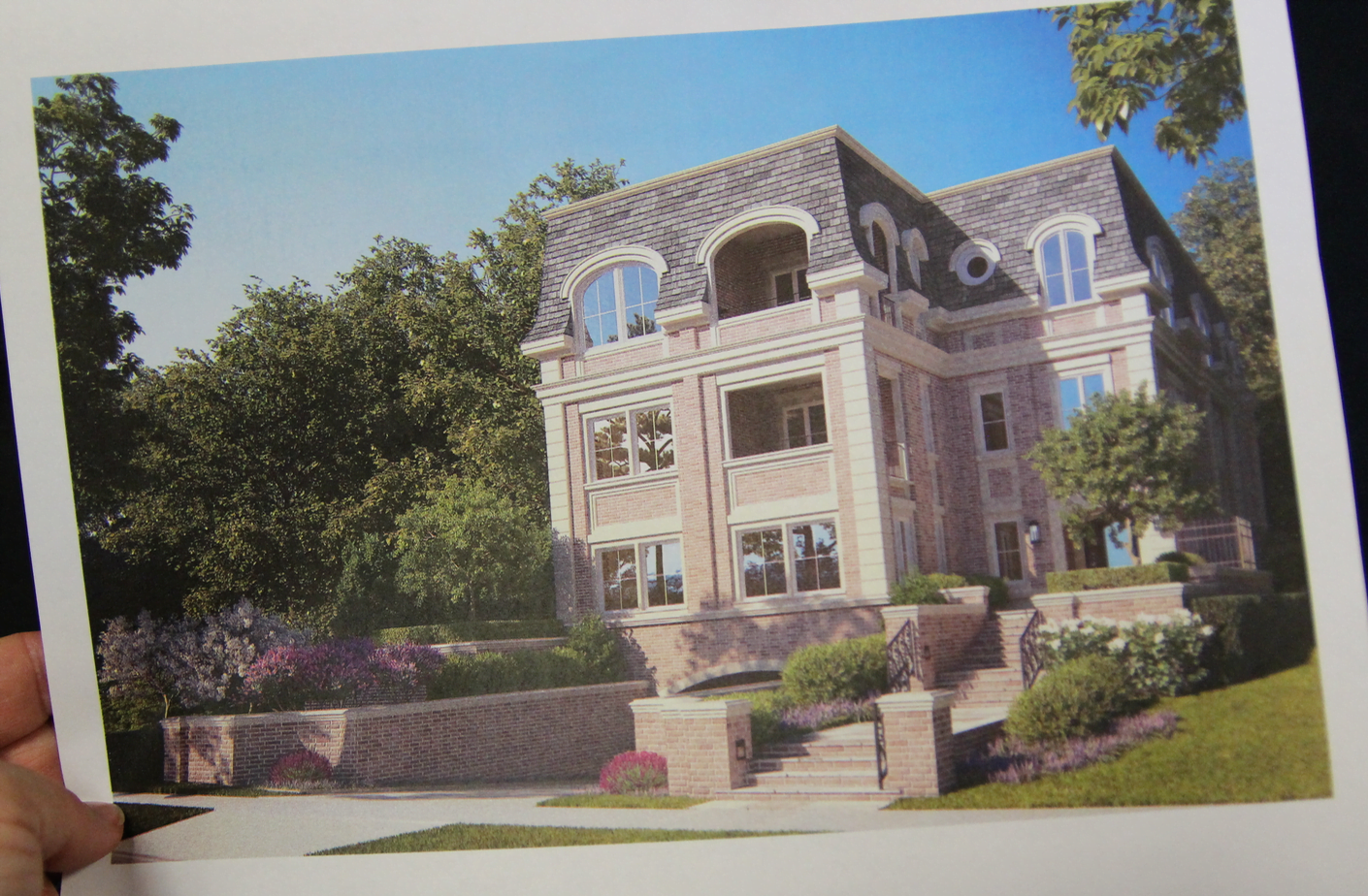 Rendering of proposed building being constructed under the 6-110 regulation for workforce housing.There will be three units on the first floor, 2 units ont he second floor and two units on the third floor. 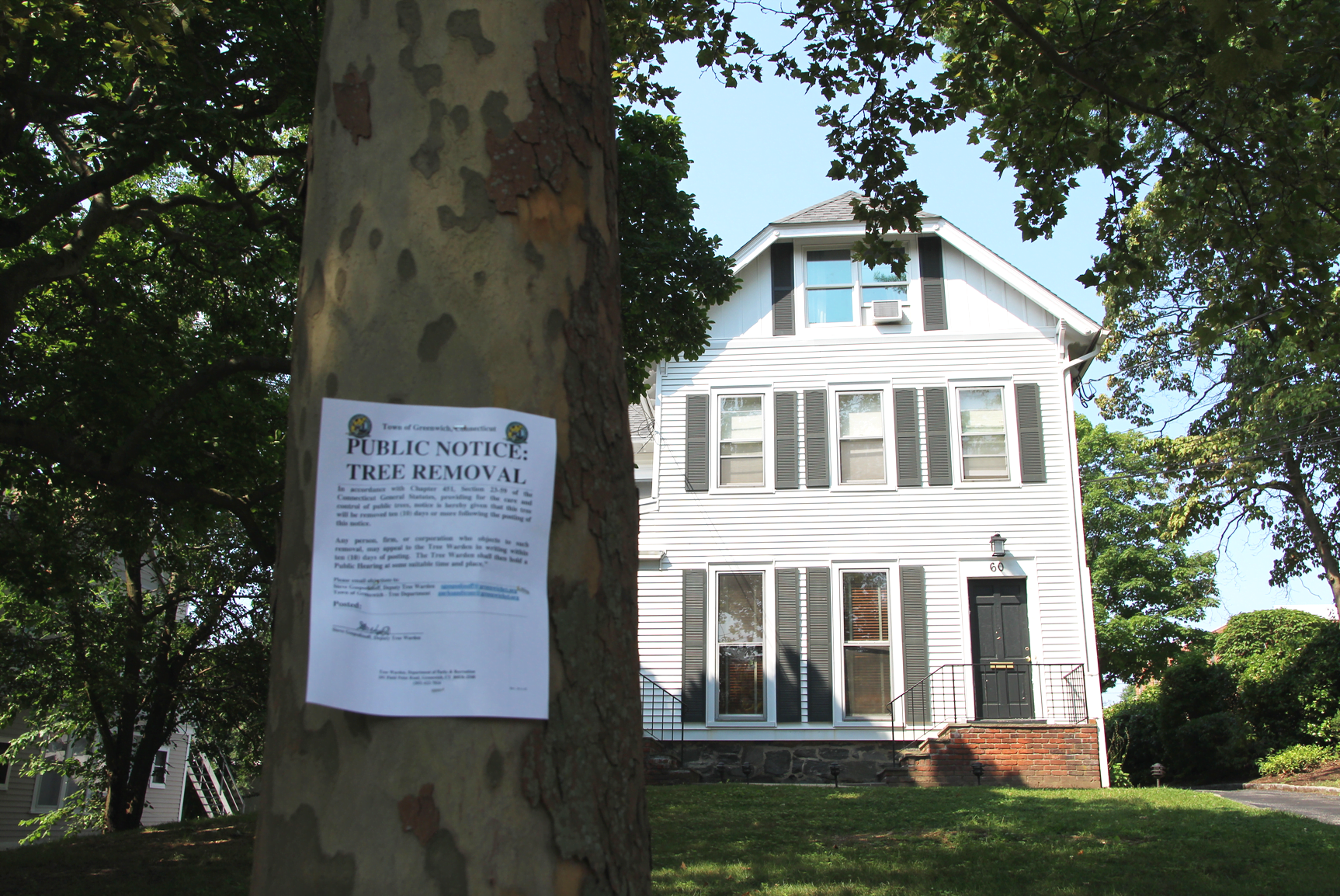 House and Town Tree out front at 62 Mason Street today.