On Thursday Interim Parking Services Director Captain Mark Kordick returned for a second appearance before the Board of Selectmen to request codifying Greenwich High School student parking on Hillside Rd, which somehow hasn’t been updated in Greenwich’s municipal code.

Since their Jan 11 meeting, the selectmen had learned that parking permits are issued to seniors twice a year.

Juniors are only allowed to park once seniors start internships in May.

In the first semester this school year, 363 students applied for permits for 288 spots available. All 363 were offered permits. After, 54 deferred their permits to spring, a total of 309 students were issued permits.

Selectman Sandy Litvack said he was sympathetic to the residents of Hillside Rd.

“This is a neighborhood. They have a right to some peace and and quiet. Parking has been intolerable to them,” he said.

“We have to be far more mindful of the homeowners and the imposition upon them,” Litvack added.

At the Jan. 11 Selectmen meeting, neighbors on Hillside said twice daily they simply cannot get in or out of their driveways, and that parents constantly pull into their driveways to pick up children.

Mr. Litvack suggested eliminating student parking spaces on Hillside, and considering whether there should be any parking allowed on the street at all.

“The school board or administration might want to consider making those spaces a privilege, not a right,” he said. “And there ought to be a method (to determine which students get a permit),” he said. “Some people will be losers in the lottery.”

Litvack suggested priority for parking permits be given to those on the honor roll.

“I agree with Mr. Litvack,” Mr. Toner said.”The neighbors have to be taken into consideration. I don’t know that codifying the parking restrictions that P&Z put into effect will do anything to ease congestion and confusion.”

Captain Kordick said student permits used to be called J Permits, and, “As best we can determine the last thing the Selectmen decided was in 1991, that designates “J Permits. We’re not trying to change the language in the code, but clean up the language.” 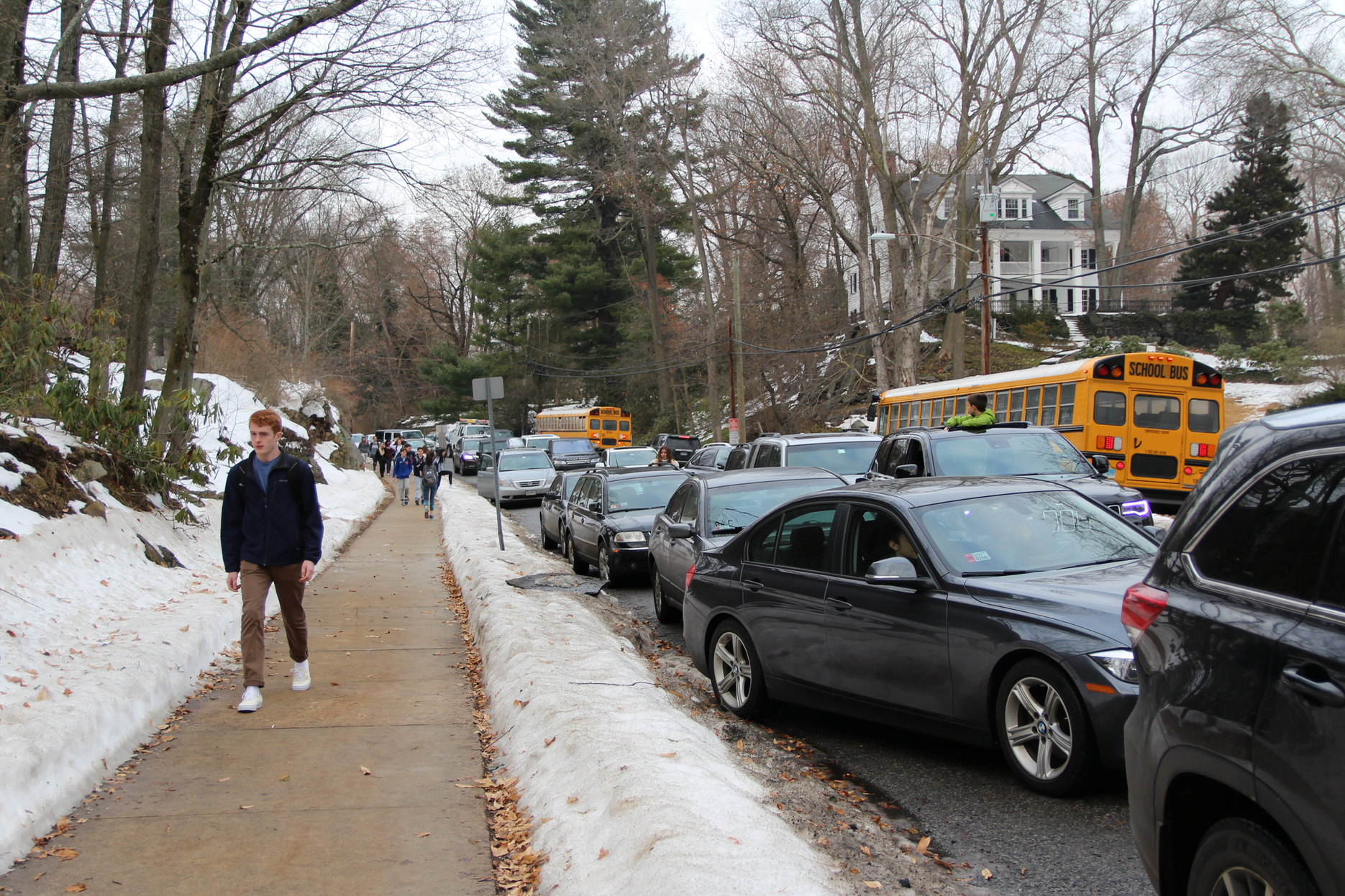 Kordick said that in Greenwich there is no general on street parking prohibition, though there are some exceptions, such as parking on curves or in front of fire hydrants. He said in general, people are allowed to park on public streets unless it is posted no parking.

“If we removed the signs altogether that say permit parking only on school days 7:00am to 3:00pm, then, in theory anyone could park there, including students,” Kordick said, adding that the existing Visitor Parking might likewise be taken up by students.

Bob Brady, who served on the Music Instructional Space & Auditorium (“MISA”) building committee, said his recollection was that P&Z recognized 663 spaces altogether for students and faculty, of which 72 are on the street. He said when MISA was built, it reduced the overall number of spaces, but that loss was offset by the addition of spaces in the south parking lot.

Captain Kordick suggested taking language for “J Permits” and changing that to “student parking,” then taking spaces marked Visitor Parking and restricting them to 2 Hour parking only.

Selectman Litvack said there were two separate issues. First, whether there should be spaces set aside for students. The second is whether to allow parking on the street at all. He suggesting consulting the town legal department, noting that in 1995 the P&Z commission added a proviso to an action they took suggesting that any changes required their approval.

“I’m not sure the basis of that was, or what was their authority to do that,” he said.

The Selectmen agreed to ask the town legal department whether or not they are bound by the conditions placed on parking on Hillside by the P&Z commission in 1995.

“We are the recognized parking authority in town, but they made a decision that essentially encumbered any action this board can make,” Tesei said.

Kordick pointed out that students are also constituents.

“Theoretically every one of them is the child of a tax payer,” he said. “It is public parking on a public street. I’ve already been contacted by people  who ask if we want 300 seniors showing up at the next Selectmen meeting to demand the right to park on public property.”

Superintendent Dr. Gildea said that students inside a two-mile radius don’t qualify for a school bus, and many need to drive to jobs after school.

“Equity access and opportunity is a huge driver,” she said. “I would not say that only honor roll students can drive. If I’m trying the hardest, and I can only pull C’s, shouldn’t I be able to park? If you want kids to be college and career ready, why would I do that to a child?”

Double Parked Parents on Hillside Road
The superintendent said the Hillside Road is wide enough for parking on one side, but that the snarl occurs when parents double park.

“We can re-educate parents about where they can safely pick up students,” Gildea said.

The superintendent said she anticipated the Selectmen would hear from students about losing their “right of passage.”

Litvack said his goal was not to punish students, but to allow the people who live on the street to have the enjoyment of their street to the maximum extent possible.

First Selectman Tesei said that consultants assisting with the Cardinal Field feasibility study have suggested adding a formal access road from Putnam Avenue (just east of Overlook) that he would support.

Ashley Cole, of Hillside Rd said she had been preparing to do a renovation to her house but can no longer justify the expense given the traffic and parking situation on her street.

“It hurts our property values and our quality of life,” Ms. Cole said.

“I beg of you please, help us save our neighborhood. If it takes removing 60 or 72 parking spaces on the street to free up traffic and create a lovely neighborhood, then so be it. It’s a small cost to save a neighborhood,” Cole said.

Burke Dempsey, a Hillside Road resident for 18 years, said he bought his house because he was assured it was part of a residential neighborhood.

“I don’t know how many other residential neighborhoods have four lanes running down it,” Dempsey said, adding that it is dangerous for people coming out of their driveways, especially with teens running across the street.

“If it’s a commercial neighborhood, let us know,” Dempsey said. “People are putting off investments in their properties. Developers are calling us. It’s quite chaotic.”

Superintendent Gildea balked at the idea of limiting parking permits to students on the honor roll.

“What if they’re working their hardest and still only getting C’s?” she asked.

“What’s underlying this is not just the school activity. There’s activity that takes place on the weekends,” Tesei said.

Dempsey said that  at night, GHS is like “an industrial complex.”

He said his property feels rural from the back, but at midnight on a Saturday, all the GHS lights are on. “It should be dark,” he said.

On his Friday morning radio show First Selectman Tesei said, “I think it would be foolish and reactionary to eliminate it (student parking on Hillside).

“I don’t want to make life more difficult for students and their families,” he said. “I don’t think we should be eliminate it. It would be very foolhardy.”

The selectmen plan to review data provided by the Schools administration and consult the legal department on their jurisdiction on the matter.