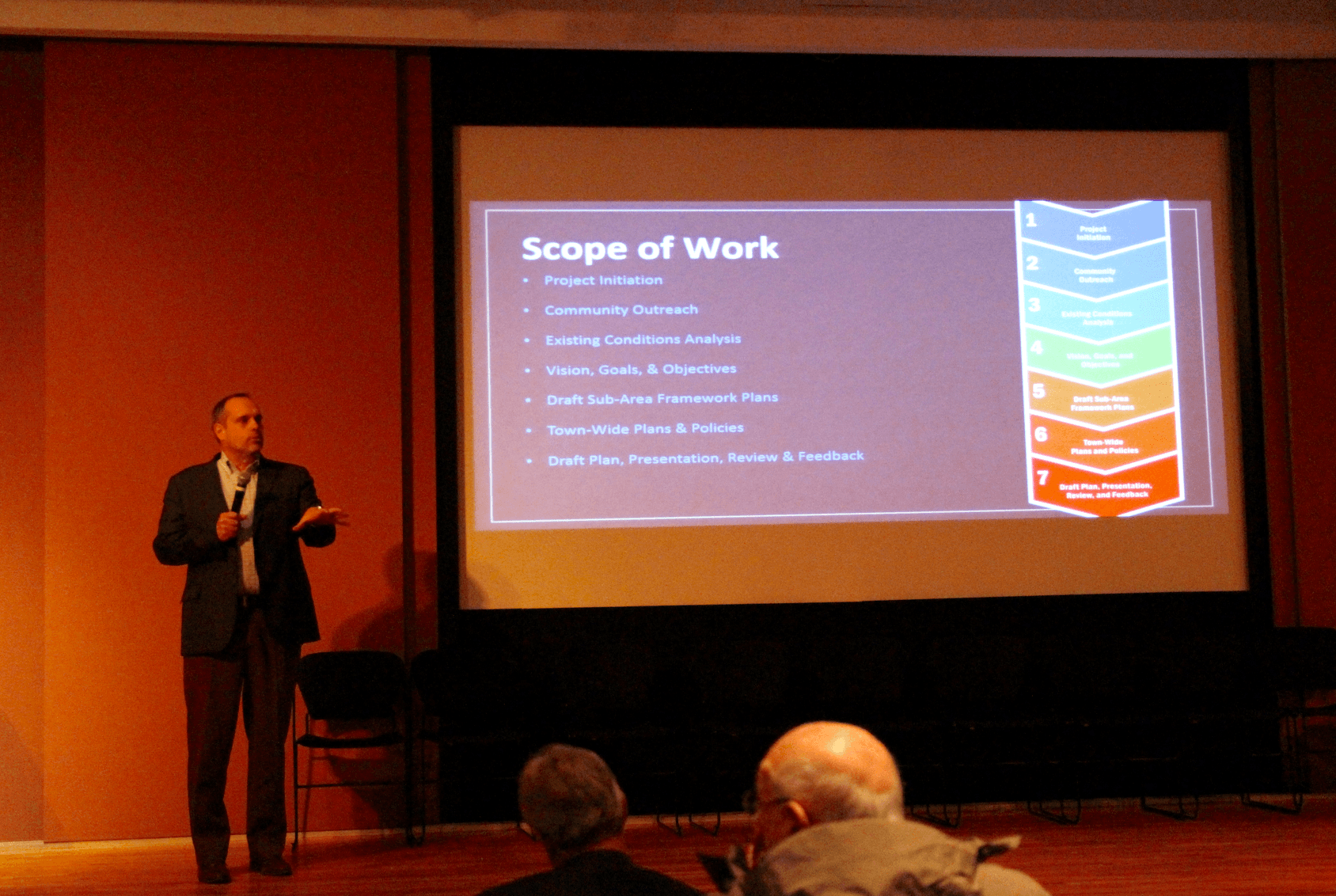 About 100 hardy residents headed to the Cole Auditorium at Greenwich Library on a cold Wednesday night for an input session on Greenwich’s Plan of Conservation and Development.

On the Town of Greenwich website, there is a link to all things POCD.

The meeting was run by consultants from Houseal Lavigne, Associates, a firm based out of Chicago. The tab for the consultant, for the year and a half process is $175,000.

John Houseal, AICP principal, founder led residents in an exercise in which all were invited to list what they think are the top five issues Greenwich faces.

When one jaded resident raised a hand and said their concern was the Town’s penchant for hiring outside consultants “in order to defer doing anything.”

Mr. Houseal said, indeed, he was familiar with “communities burnt out being asked what needs to get done and nothing gets implemented.”

Houseal called on residents one at a time, and it wasn’t long before the answers started to take on themes. Once Mr. Houseal had about 100 issues projected on the screen, he asked residents to winnow down their issues of concern to just three. At that point a show of hands revealed a shorter list of priorities:

From there, Mr. Houseal asked those in attendance to image what would be their immediate “action steps” if they were in charge of running Greenwich.

The responses drew laughter and nods of agreement. One suggestion was to evict the Board of Education from the Havemeyer Building and and re-purpose the building for performing arts.

Elaborating on that thought, another resident suggested making that building a practice facility for Greenwich High School students, and, in turn lure teens back to Greenwich Avenue.

With suggestions multiplying for ways to draw people to Greenwich Avenue, it was suggested it be made into a pedestrian only street.

Another resident suggested moving forward the “Tranfo development” on Benedict Place, a stone’s throw from Greenwich Avenue. (The reference is to a proposal by Joseph Tranfo, who owns ten residential properties on Benedict Place and Benedict Court. He seeks to demolish the buildings and develop three apartment buildings with a total of about 70 units with underground parking for residents and the public and community meeting space. He seeks to turn the 77-spot municipal parking lot at Lewis and Benedict Place into a park and give back the parking via the underground level of parking.)

Continuing on the theme of improving Greenwich Avenue, there was suggestion to find the owners of buildings on Greenwich Avenue and fine them for leaving the retail space empty drew a round of applause and laughter.

Another suggestion that drew applause was to loosen restrictions on the types of businesses permitted to operate on Greenwich Avenue. Mr. Houseal said regulations on the books can prevent residents from getting what they want.

One couple said they’d like to change the rules about AirBnb. They said many apartments and townhouses are up for rent on a nightly basis. “It brings nothing to the town and undermines affordable housing. People are buying properties just to Air BnB them.”