A Municipal Improvement, site plan and special permit for the Cardinal Stadium bleacher project at Greenwich High School were on Tuesday’s P&Z agenda, and it wasn’t long before there was disagreement.

When the item was presented in April as a non binding pre-application, discussion focused on new access ways including the one from East Putnam Ave, which is currently limited to emergency vehicles, and a potential access road connecting the stadium to the GHS rear parking lot.

The proposal is to open the access from East Putnam Ave, with a right turn only entrance/right turn only exit for food trucks and emergency vehicles, and provide access to a new handicapped accessible parking lot.

The concern among the commissioners Tuesday night was that if work goes forward on the access from East Putnam Ave during phase 1, it might have to be redone in phase 2 to proceed with the access road to the back of the school.

P&Z director Katie DeLuca read a memo from DPW deputy commissioner James Michel summarizing a meeting with the Connecticut Dept of Transportation. (The State of CT has jurisdiction over Route 1/East Putnam Ave). 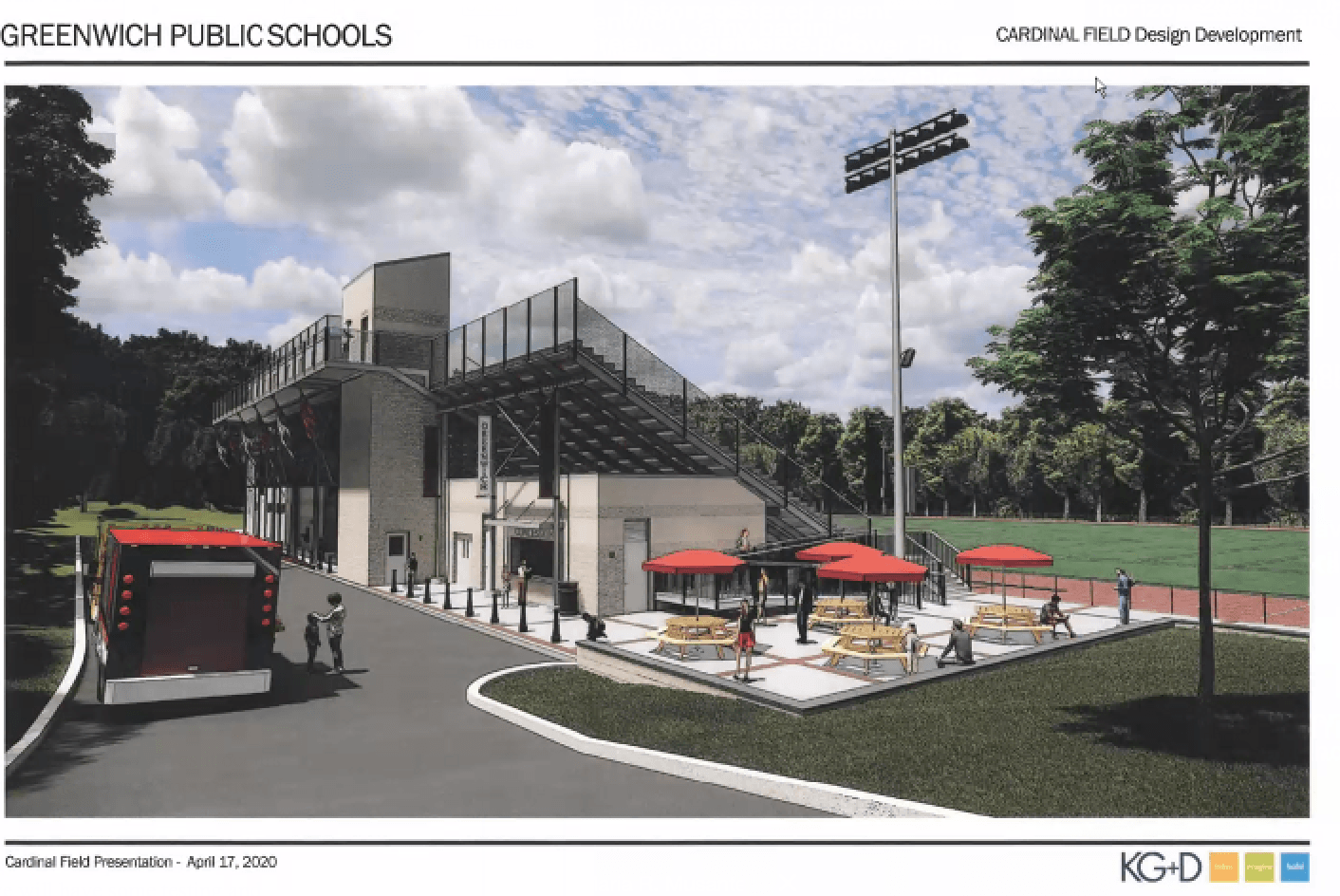 In his memo, Mr. Michel said CT DOT agreed the right turn in/right turn out is acceptable in phase 1 (also includes home bleachers and under bleacher buildings, press box/elevator, toilet facilities, new lights on existing poles and entry kiosk), but that in phase 2 it might make sense to align the access with Overlook Drive for a fully signalized intersection.

Matt Skelly, an engineer Fuss & O’Neill, who was on the call with the DOT, said they were generally on board with upgraded access for phase 1.

“As far as phase 2,” he said, “The DOT agreed it is a safe access point and that you would get a benefit to the intersection with Hillside. It would relieve some of the pressure of people who come down Hillside to take a right. That’s a phase 2 issue.”

“For our young people. Look at the year they’re having this year. They need this,” she said.

Everyone agreed the new bleachers are sorely needed. BOE member Joe Kelly described having physically carried handicapped people up and down the bleachers for many years, and called the condemned bleachers and port-o-johns an embarrassment.

BOE chair Peter Bernstein said the new bleachers were, “not a nice to have, but a necessity.”

“We have one entrance and exit, and the bleachers are condemned,” Bernstein said. “We have a sense of urgency and the project is fully vetted. He said there has been much public comment on the project and years of committee work including that of the First Selectman’s Committee for People with Disabilities. 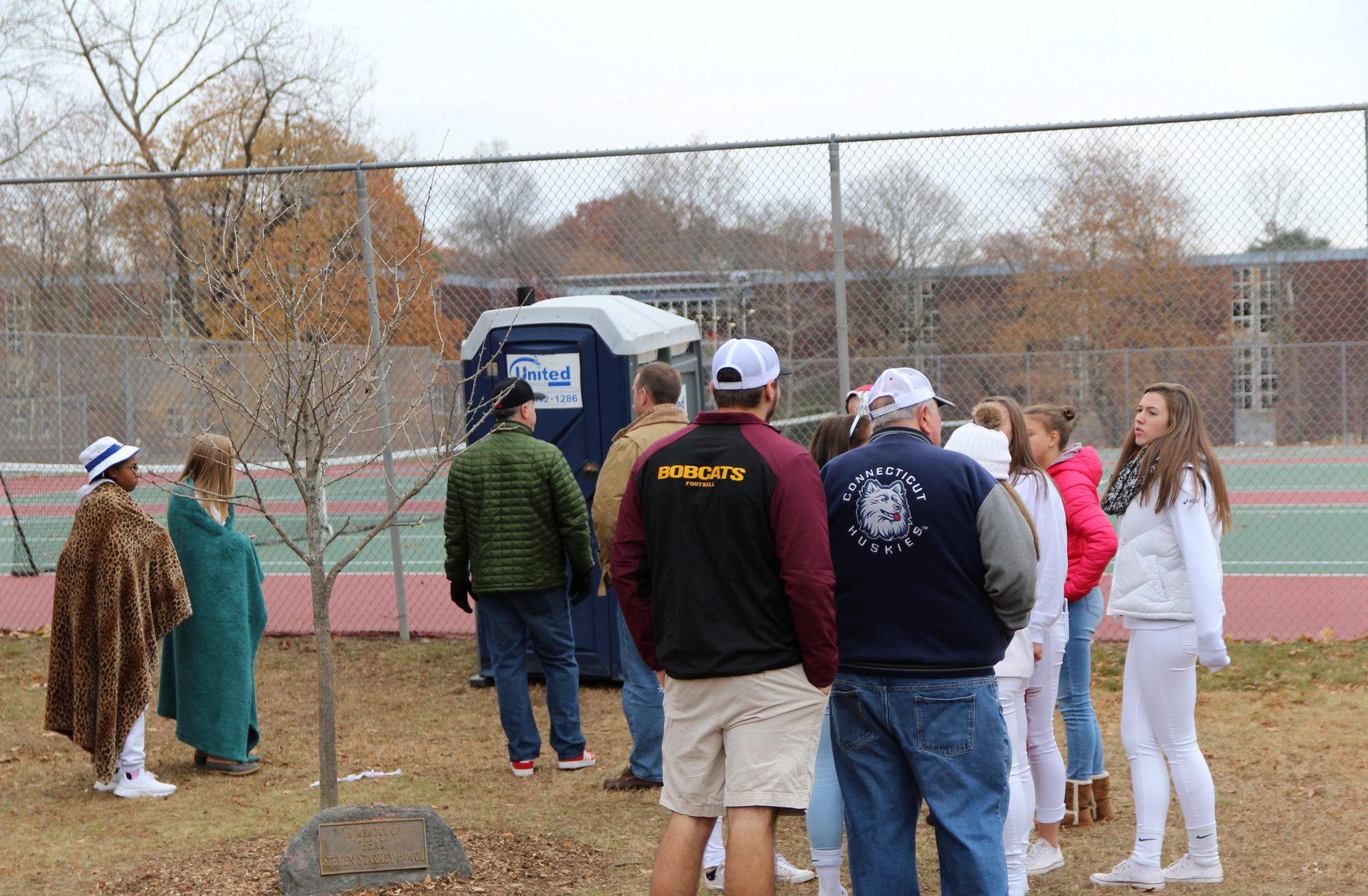 Fans from visiting team, the South Windsor Bobcats, waited in line for a port-a-pottie in November, 2017

“There is no ADA access, no bathrooms, no team facilities and the bleachers are condemned,” he said. “It certainly does not meet that standard of adequate educational facilities.”

What was different Tuesday night from the pre-application meeting in April was the district hired local land use attorney Tom Heagney, who served on P&Z himself from ’85-’91 and on the BOE from ’91-’95,

Mr. Heagney said when the high school opened in 1970 the bleachers were placed further north on campus, but, he said, “they sank.”

Indeed, the town hired a helicopter to lift the bleachers and move them to their existing location in the 1970s.

The bleachers are being held up with scaffolding that the Greenwich Athletic Foundation offered to pay for for several months, but that period ended in December.

The GAF also had offered to contribute $1million toward the project but has withdrawn that offer.

The commission did not dispute the urgency of the project. Rather they talked about approaching the project holistically, rather than breaking it into phases.

Commissioner Nick Macri said he was reluctant to break the project into phase 1A (just bleachers and a foundation) and 1B (remainder on phase 1) followed by phase 2 because some work might have to be redone, and besides, he said the bleachers are usable.

“They are not usable,” Mr. Bernstein said. “They could be removed at any time.”

Bernstein explained that the district has not been paying for the scaffolding rental since the Greenwich Athletic Foundation’s agreement to pay the rental expired, and that there is also a monthly inspection fee.

“It’s a considerable expense we’d rather not have,” he added. 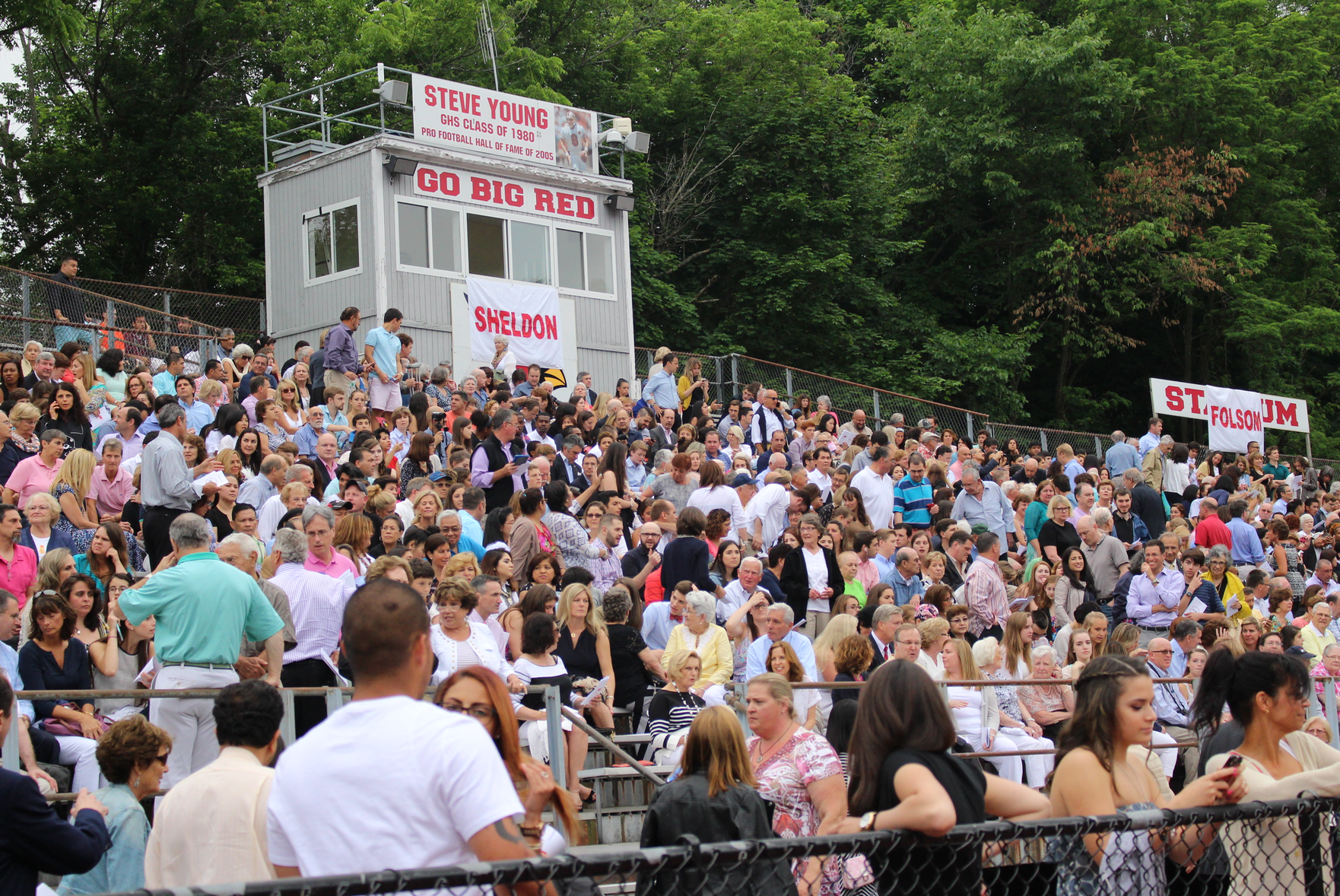 P&Z director DeLuca said, “Our point was not to do these things piecemeal.”

Commissioner Andy Fox said, “Where you stand in the approval process – even if we miraculously approved it tonight – you wouldn’t have a building permit until September at best…Does the public realize that no matter what we do, there won’t be a new stadium this fall?”

Mr. Fox said there remained “big issues” to be discussed and anticipated the application returning at least two to three times before the commission.

Attorney Heagney said the applicants would seek cooperation from town departments, and planned to go before the Zoning Board of Appeals for variances on the press box and bleachers height and for Floor Area Ratio.

“If everyone acts as though this is an important project for our town…I think this can get done quickly,” he said.

Commissioner Peter Lowe again referred to a holistic approach and said he was concerned that the different elements are not discrete enough to ensure there aren’t inefficiencies.

“For example, if we approve phase 1 as it is, will that road work have to be completely redone as part of phase 2 to accommodate the road continuing to the back of the high school lot?”

Commissioner Dave Hardman said he thought the commission had an obligation to work as hard as possible with the BOE to move the project forward.

“There are complicating factors, but we can address those. Getting this finished, completed, particularly in a troubling time like now, would be a significant achievement for the town and the school system,” Hardman said.

The BOE’s architect Russ Davidson said the bleachers could be replaced by fall. “The shop drawings are done. The bleachers have been procured. Test borings have been done.”

Rick Kral spoke on behalf of the Greenwich Athletic Foundation, saying his group was concerned to hear the bleachers had been “procured” and shop drawings done.

Per the town charter, an approved Municipal Improvement is required before a purchase order can be issued. What is allowed are “studies and surveys.”

BOE chair Bernstein said Mr. Davidson had misspoken when he said the bleachers had been procured.

Mr. Kral said there would be benefits in the bidding process of doing the entire project rather than breaking it into pieces.

“The bleachers could be and should be used through this season and into the fall with proper inspections. The shoring still exists. All the paving was done. The fences were fixed. Everything the building inspectors asked for to allow the existing, but nonconforming bleachers,” he said, going on to ask why there was a rush to get the bleachers replaced by September.

State Rep Steve Meskers said the Greenwich delegation would be willing to help expedite the process for state permissions.

“This is a beautiful time to do something like this,” Meskers said. “It would send a lifeline to the town and give the children of the town an uplifting project to look forward to.”

After the meeting Rich Fulton issued a statement on behalf of the GAF, saying that since 2017 they have had the same concerns that P&Z brought up during the meeting.

“We ask, once again, to please allow us, as volunteers, to be a part of a building committee that can help vet all these problems that the BOE is now faced with in this project.

We have experts willing to donate their time to see this project through.”

P&Z Chair Alban suggested to the BOE, “Give some serious thought as to whether September is realistic. There are no group meetings in excess of 5 people allowed, including at a restaurant table and that’s until at last June 20. I’m not clear you’ll have spectator sports in the fall anyway.”

“Do we want to take up the MI?” Mr. Fox asked. “I feel they’re a little over their skis. I don’t know if we should take it up.”

“I would not want to take up the MI now,” Alban said. “I want them to address all the issues. What do you guys think?”

Attorney Heagney said his group would meet and come up with a plan to move forward.