Reached by email, Mrs. Ramer, a retired attorney who ran Ramer & Ramer for decades in Greenwich with her husband Jeff Ramer, explained her reasons for resigning after five years on the commission.

Mrs. Ramer, who is known for her extensive meeting preparation and acute attention to detail, said she has tried to do a good job on the commission and has learned a tremendous amount about our town and its residents.

However, she said, “Somehow, working and raising children doesn’t allow much time for that.  And I have very much enjoyed and appreciated the fine minds and hard work of  a number of my fellow commissioners.”

Mrs. Ramer said the role of the Commission as a quasi judicial neutral has been an interesting one, starkly different from being an advocate in a courtroom as she was for 40 years before retiring.

“It has been enlightening to see that the advocates who appear before the Commission are very reminiscent of the breadth of the practicing bar that I experienced when I was practicing law,” she added.

Mrs. Ramer said that when she was invited to join the commission it was “serendipitous.”

“I was gradually  winding my way toward retirement and wondering what I would do when I stopped working,” she said. “Finding a volunteer job that would  allow me to explore a whole new area of the law beyond family law seemed like the perfect choice.  It has been an exceptional experience but I guess that I am still evolving in my retirement and feeling the need to change gears at this point, to volunteer in a slower paced way.”

Mrs. Ramer was elevated from alternate to full member of the commission in November of 2015 after having been passed over the previous summer by Andy Fox.

In August 2015, Andy Fox, a Planning and Zoning Commission alternate with less seniority than Mrs. Ramer was nominated to fill the space vacated by Fred Brooks who resigned earlier in the summer.

After Selectman John Toner nominated Mr. Fox and Mr. Tesei seconded it, Mr. Marzullo said he was entitled to nominate someone else. He nominated Mrs. Ramer.

Per the Town charter, the commission has five full members and the majority party can have one more member than the minority party.

“Unless there is a compelling reason, one based on verifiable facts, there is no reason not to promote the alternate member next in line,” Marzullo said. “I do think the question of precedent should take place here.”

“Nancy Ramer has commanded the respect of the commission itself, her constituents she serves, elected officials, elected leadership. Nancy has committed herself to being the best board member she could possibly be. That is evidenced by the quantitative, documented hundreds of hours, hundreds, that she has worked. This should be a routine appointment. This board should be following routine, past precedence and procedure.

I ask this board to consider the negative impact of not promoting a qualified, diligent, respected member of this commission. She is respected by all – Democrats, Republicans and Independents.”

If this board does deviate from past practice, other boards could face the possibility of a cast of shadows, could be subject to lobbying, and various chairpersons wanting a person they deem fit. I believe we should follow precedent and process. Nancy Ramer has earned this promotion and nomination.” – Drew Marzullo 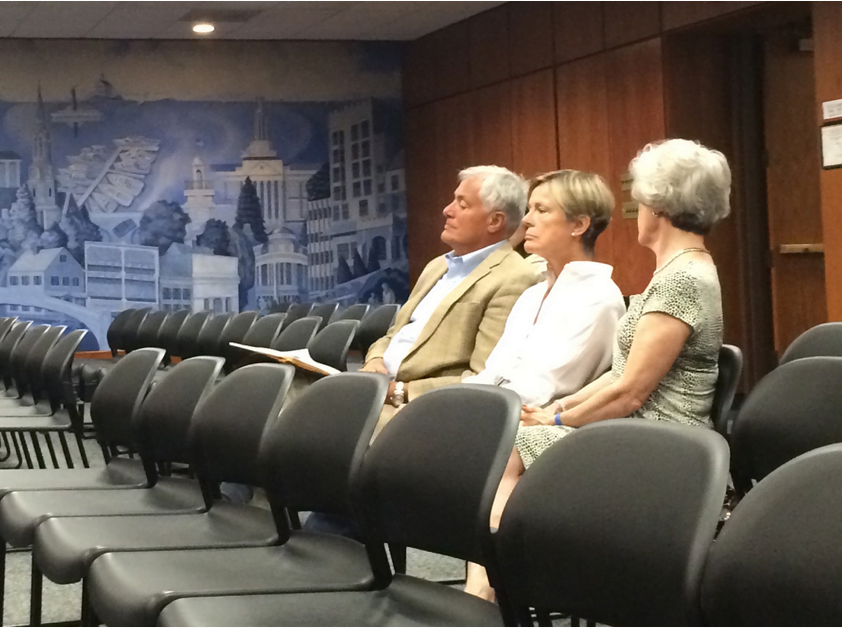 Nancy Ramer, center, who had seniority as an alternate on the Planning and Zoning commission, was passed over by a 2 to 1 vote of the Selectmen in favor of Andy Fox, another alternate. To the left of Mrs Ramer is her husband Jeff Ramer of the Board of Estimate and Taxation. Credit: Leslie Yager