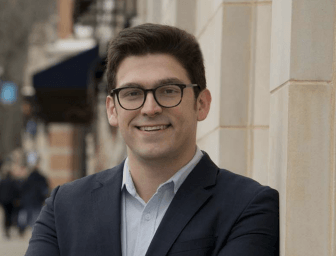 Ryan Fazio announced on Tuesday his candidacy for the state Senate for the 36th district, representing New Canaan, Stamford and Greenwich.

This is the seat held by Democrat Alex Mochary Kasser (formerly Alex Bergstein). He filed his candidacy two weeks ago.

According to a release on Tuesday, Fazio, a native of Greenwich, is running on a mission to “change Hartford, save Connecticut, and restore hope for the future of the state.”

He believes Connecticut faces two great crises: a Coronavirus outbreak and a stagnant state economy, which he said will be exacerbated by the public health emergency.

“I applaud the efforts of our local leaders and Governor this month. And still there is more to be done,” he said in the release. “We should limit non-essential public gatherings to fewer than 50 people and improve critical supply chains by easing certain regulations. For example, we should give licensing privileges to out-of-state doctors and nurses to help ease the heavy burden on local hospitals and personnel that will be overworked. And by easing trucking regulations, we will be able to restock our grocery stores and pharmacies with much-needed supplies.”

“The people of our district are caring. All my life, I have watched people here step up to help in the face of adversity, and I’m seeing it even more this week. Social service agencies and medical professionals are working overtime to assure our safety. And we are answering the call to action by social distancing, hygiene, and supporting local business in a safe manner.” – Ryan Fazio

In the aftermath of the public health crisis, Fazio said, “Connecticut and the new state legislature will face an even worse economic crisis than in years past.”

“Middle class families in our district and state have seen zero real income growth over decades. Regular people are hurting. And they are hurting because of the failures of our policies and of our state government,” Fazio said, adding, “Connecticut has the second-highest tax and debt burden in the country and newly elected officials made the problem worse last year by raising taxes by billions and imposing even more red tape on workers.”

“As your state senator, I want to pass the first state income tax cut in history for all workers and simplify our tax system. I would move to cut hundreds of millions of dollars in wasteful spending, reform state employee benefits that are bankrupting the state, and reduce or improve regulations hurting workers.” – Ryan Fazio

Fazio said he would prioritize fixing the transportation infrastructure without imposing tolls which he views as a tax, and raising educational standards for everyone across the state.

“The 36th District is my home. I grew up here. I know it well. I am fully prepared to fight for our interests,” he concluded in his release. “We live in a wonderful state. And although we face big challenges, Connecticut is worth fighting for.”

Fazio graduated from Northwestern University with a degree in Economics before returning home to work as a renewable energy professional in Stamford. He is currently a member of the Greenwich RTM, vocal public policy advocate, and volunteer at inner-city schools.