On Thursday night, a virtual Dept of Transportation public hearing resulted in numerous questions from Greenwich residents. The meeting host noted there were 80+ attendees.

Neil Patel, the project manager, said the project was limited to resurfacing, bridge rehabilitation and safety improvements on I-95 in Greenwich, from Byram to exit 6 in Stamford.

The public comment period runs through Feb 22, 2021. The project is currently at the “30% design phase” and feedback will be considered before final design phase.

The stretch of I-95 accommodates between 125,900 to 145,700 vehicles a day and feature 6 interchanges. The highway passes over and under a total 16 local roads, over the Metro North RR and over several bodies of water including the Byram River, Cos Cob Harbor and the Mianus River. It is also notable it passes over flood zones and other environmentally sensitive areas.

In addition to removing asphalt and repairing the concrete underneath, the stretch features bridges constructed in 1955 that are in need of repair.

The work includes all new highway lighting, with lights moved to the median where possible. Also roadside and ramp lighting will be replaced.

Medians, roadside barriers and guide rails will be upgraded.

When a resident asked whether the project would include sound barriers like the ones in Darien, the DOT presenters said Darien had met noise criteria that the Greenwich/Stamford did not.

The DOT hosts described the Greenwich/Stamford project primarily as “preservation project” to extend the service life of the pavement, and therefore didn’t qualify for noise barriers. They explained that in Darien, a full auxiliary lane was added between exits, whereas in Greenwich there is a proposed “deceleration extension.”

Further, they said the Greenwich project did not even meet the eligibility for noise analysis, therefore one was not conducted for this project.

Asked whether it might be possible for the DOT to accept private money for a sound barrier in the area of Old Greenwich where residents have already experienced tree loss and the noise of trucks has increased, the DOT said they do have a private funding policy.

“We wouldn’t conduct it on your behalf and you would have to wait until after the project is complete and you’d have to meet our department noise policy,” Mr. Patel said.

DOT was asked about coordinating the Greenwich/Stamford project with the work at the state line with Ne York.

They replied that the New York project had already been in under way for almost 2 years, and the Greenwich/Stamford work wouldn’t start until 2022, but that they would coordinate to minimize overlap.

Tree clearing. The DOT was asked how many trees would be cut down and whether they would replace vegetation.

The past few years have seen a number of tree clearing projects by both the DOT and Metro-North along I-95 and the railroad tracks that run parallel to the highway.

“Selective tree clearing will be necessary to allow for construction and to increase the safety of the corridor. Sight distance around curves will be increased by cutting trees back. Some trees will need to be removed in order to replace the slope pipes along the immediate vicinity of the highway. Finally, tree limbs overhanging the highway will be cut back.”

The work will begin in fall 2022, with a “conservative” estimate that construction will take of 3-4 years. It will be broken into three equal 2-mile segments, and the cost is estimated at $205Million, with 90% of funding from the federal government, and 10% from the State of CT.

Throughout construction the 55 mph speed limit will be maintained.

There will be lane closures at night, and the possibility of weekend work as well. All lanes will be fully operational during the daytime.

Locally, there will be closures on South Water Street and River Ave, though only for short durations.

A resident noted the Riverside Association receives complaints about emissions from cars and trucks, and asked if there a regulation that dealt with fumes and emissions?

“That’s not the purpose of the project,” they replied. “We’re not expanding lanes, which would require an air quality analysis.” 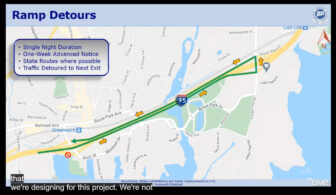 DOT will give a minimum of one week notice for detours, and state routes will be used wherever possible.

Asked whether there would be detours onto the Post Rd, the DOT said their goal was to keep traffic on I-95 as much as possible.

Several residents asked if the project included lengthening or widening the deceleration ramp at Exit 2 southbound.

Again, the presenters said the primary purpose of the project is “preservation” to extend the life of the pavement surface and upgrade safety.

Work at Exit 2 will be to rehabilitate the pavement, install a guide rail and install new illumination, signing and striping.

This is the only part of the project that goes beyond simply extending service life. There is no other widening proposed.

At Exit 3, a section of rock outcropping will be removed to accommodate the proposed widening and lengthening of the southbound deceleration lane.

DOT said the idea of a mural had been discussed with state legislators and a neighborhood association.

“We’d like our project to come through first before any type of mural,” they said. “We wouldn’t add it under this project, but I believe there is a process through the maintenance and encroachment division.”

Participants were encouraged to give feedback on Survey Monkey: www.surveymonkey.com/r/GDKRH8J