Last July the sudden and unexpected clear cutting of trees on I95 northbound between Exits 3 and 4 left a landscape of graffiti and houses not previously visible from the highway, and Greenwich residents were not happy.

Worse, the DOT said they don’t want the trees replanted in the right of way, “given the proximity to the interstate, the Metro-North infrastructure, and the Eversource power lines that service the Town.”

This week, Greenwich residents were upset about the cutting of Greenwich’s trees along I95 northbound. 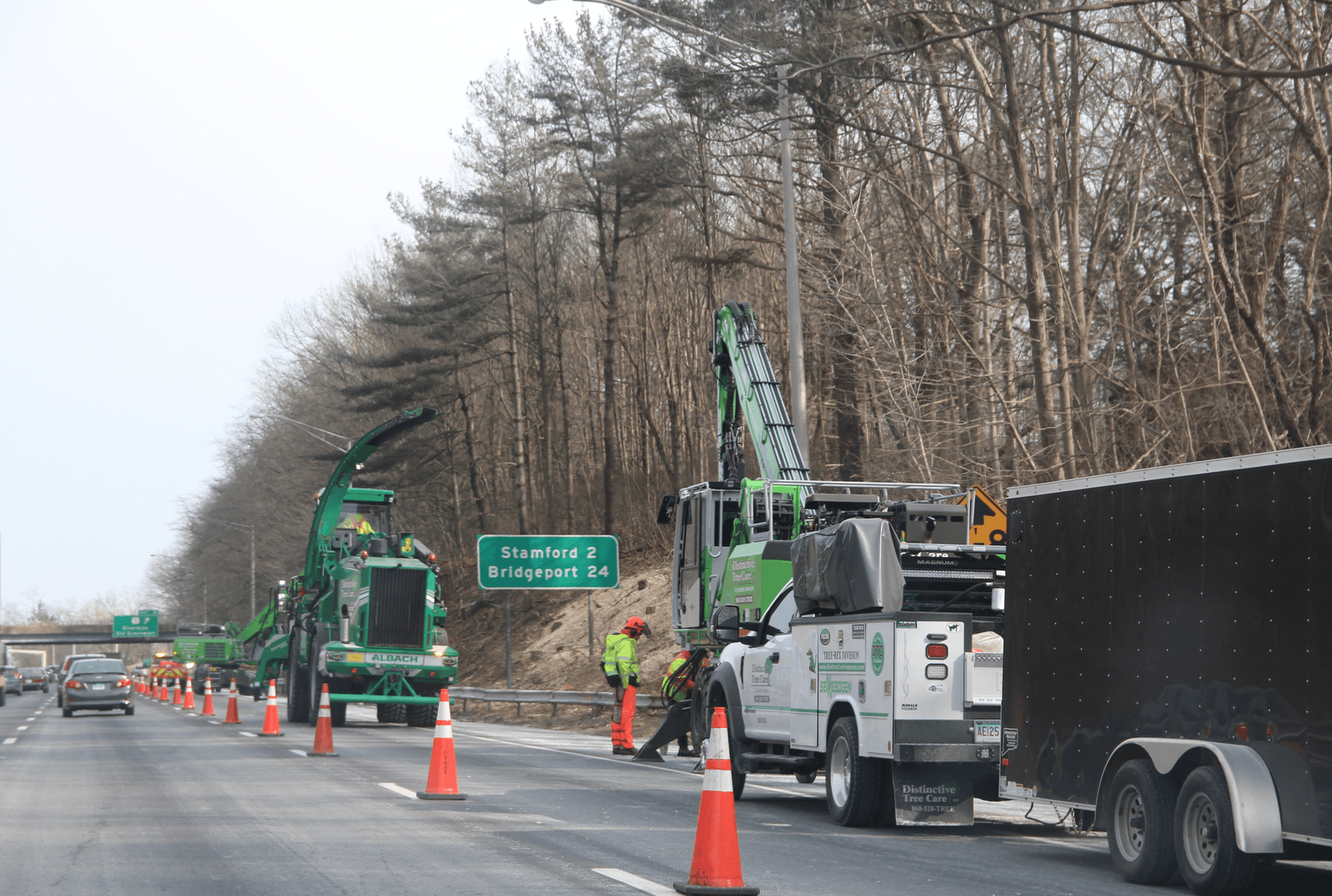 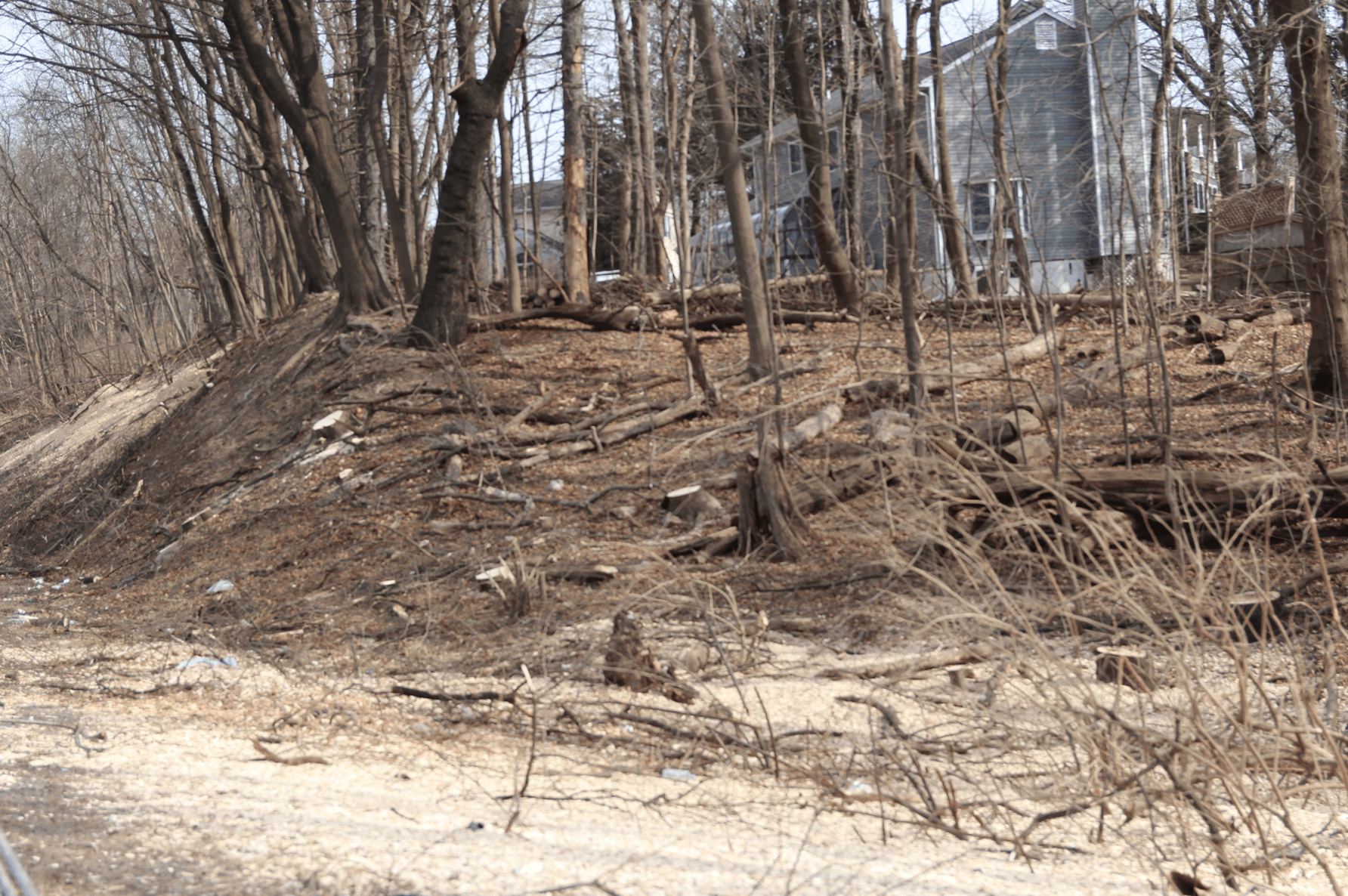 In fact, on Friday around 2:30pm, tree crews were working from the right lane of I95 near exit 5.  Traffic was backed up all the way to the NY state line.

The DOT issued a statement explaining why they are removing trees along I95 throughout Greenwich.

The department said its primary mission is to keep the infrastructure safe.

“To this end, it is the Department’s responsibility to prune, trim or remove dead, dying, decaying or otherwise compromised trees and vegetation in the state highway right-of-way, abutting the road shoulder area and center-median of highways and ramps,” the DOT said in a statement.

The DOT said between 2012 to 2014 there were over 7,800 motor vehicle incidents involving tree strikes statewide, resulting in 147 fatalities.

While most of the incidents involved motor vehicles leaving the highway, over 560 were due to trees falling onto the travel portion of the highways, which have led to many claims against the State of Connecticut.

As part of the Department’s vegetation management program, reestablishment of a ‘clear zone’ along high speed roadways is a priority.

“Trees and brush were not present when the highways were constructed. However, due to years of deferred maintenance they have become hazardous to the motoring public.” – CT DOT

The “clear zone” is an unobstructed area beyond the edge of pavement that provides an unencumbered, impact-free buffer for errant vehicles that unintentionally leave the roadway. 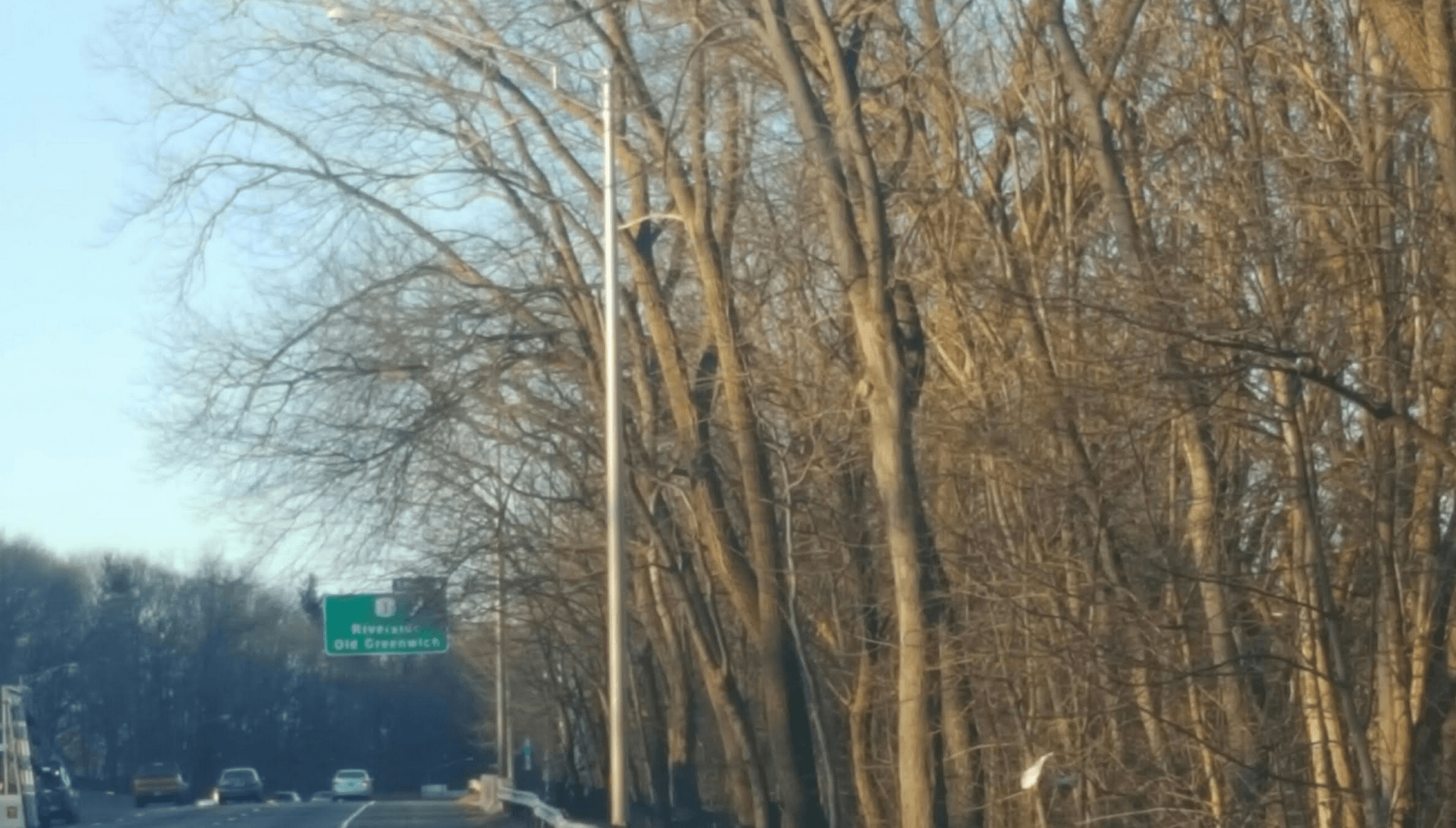 Before: Trees were overhanging I95 on the approach to exit 5.

Here is the remainder of the DOT statement:

The American Association of State Highway and Transportation Officials (AASHTO) “Guidelines for Vegetation Management” published in 2011 consider a tree with a trunk greater than 4” in diameter as a hazardous fixed object.

The AASHTO specification for a clear zone on major highways with design speeds of 60 mph for a flat, level terrain on a straight section of highway is 30 to 32 feet. CTDOT follows these established guidelines.

Tree and vegetation pruning and removal is typically a routine day-to-day activity for the Department.

However, following Tropical Storm Irene, and the October Snow Storm in 2011, a Two Storm Panel was established to assess the state’s response and how the state can better prepare for future disasters. (The after math of these storms left over 500 state roads impassable and over 750,000 homes and businesses without power). The panel recommended that a State Vegetation Management Task Force be established creating guidelines regarding roadside vegetation. The Department was an active member of that Task Force.

The Two Storm Panel report also recommended increasing the tree maintenance budget for trimming and removing dead, dying and structurally impaired trees at an accelerated rate. The District Supervisors, who travel the respective roadways weekly, refer trees of concern to the Department’s landscape designers who then evaluate the trees and determine if they pose a potential hazard to the traveling public. Scheduled tree work also includes trees and brush that obscure lines-of-sight or have the potential to fall onto the state roadways.

Currently the state of Connecticut is experiencing a “statewide tree mortality issue” because of several years of drought conditions, emerald ash borer (EAB) infestations in our ash trees and gypsy moth attacks on our oak trees. The Department is actively removing dead, decayed trees with state forces and contractor services.

In most instances, the decay in our ash and oak trees is so extensive that removal of such trees requires specialized equipment such as feller bunchers, elevator buckets and crane units, and material handler/grapple saw units.

There are many positive results of tree management, including reestablishment of the habitat for meadow birds and other species and pollinator corridors.

The Federal Highway Administration recently adopted legislation directing Transportation Departments to look at establishing pollinator corridors for bees and other pollinating insects along transportation rights-of-ways. Another positive result is the exposure of vehicles to wildlife. Over the past five
years, the number of deer strikes along the State Highway system has come down.

The Department is completely committed to the safety of the motoring public and the efficiency of the state’s transportation network and understands the aesthetic and environmental value of healthy vegetation and trees, and as such will continue to make reasonable efforts to preserve trees and aesthetic without compromising safety. 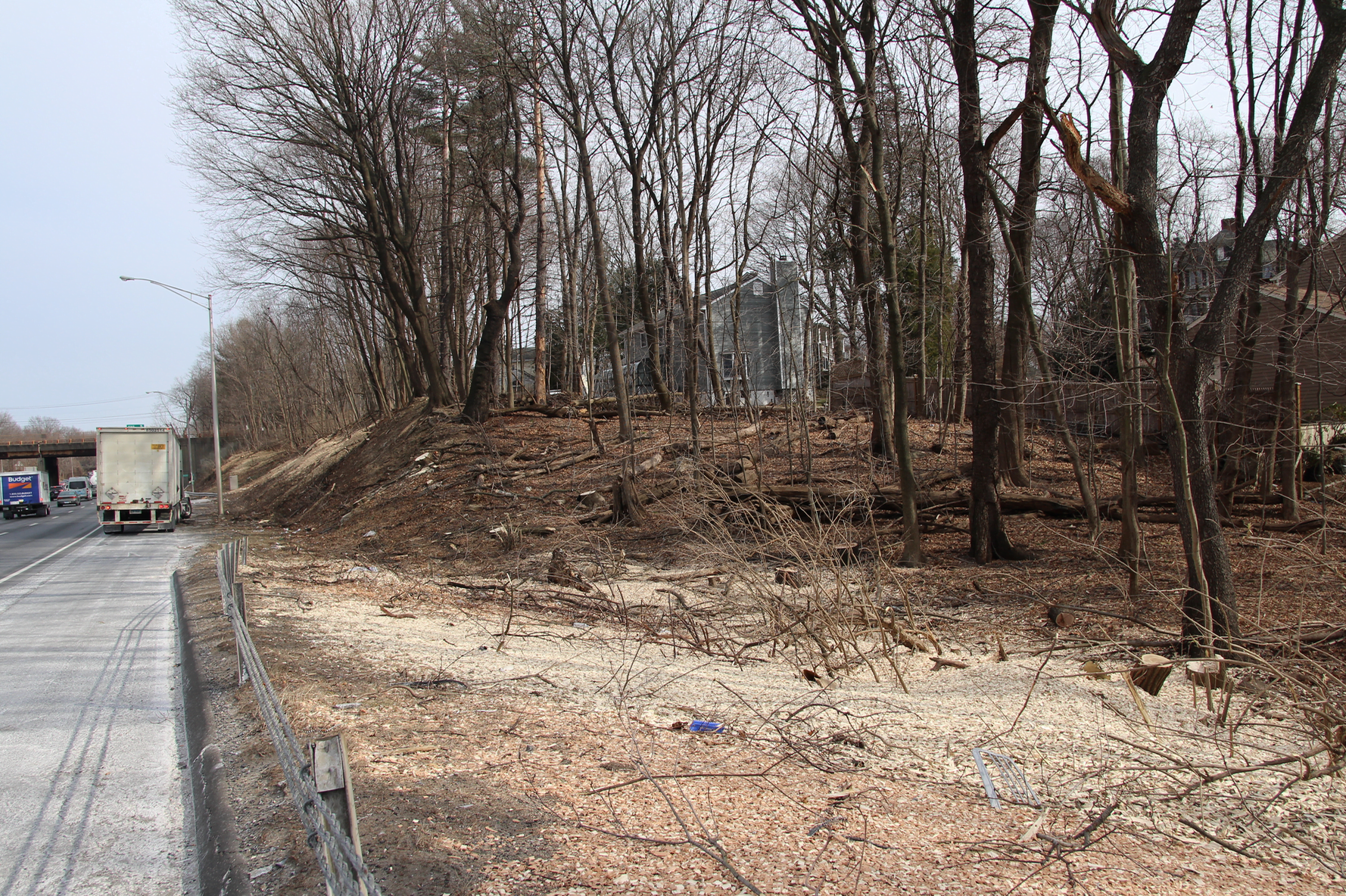 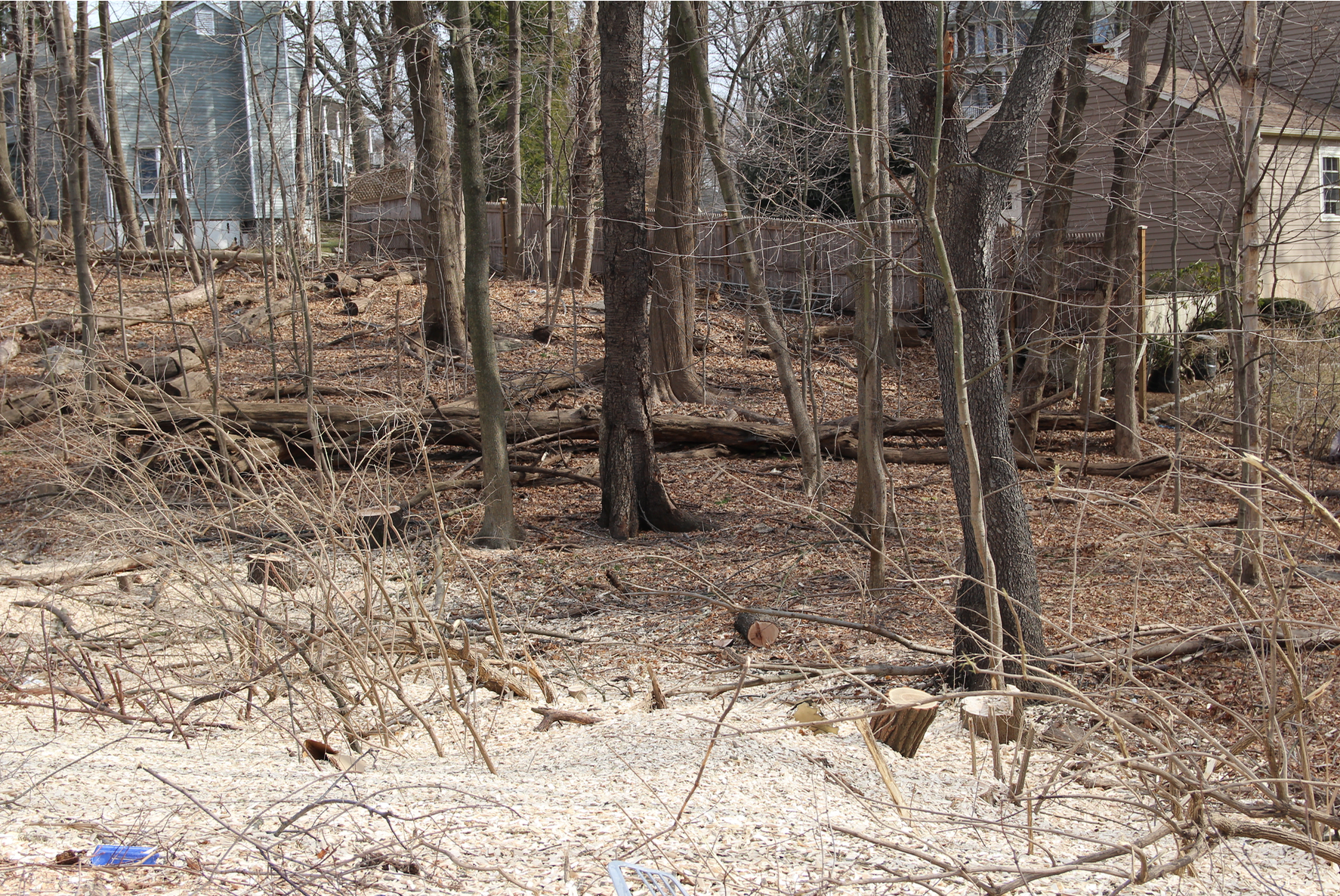 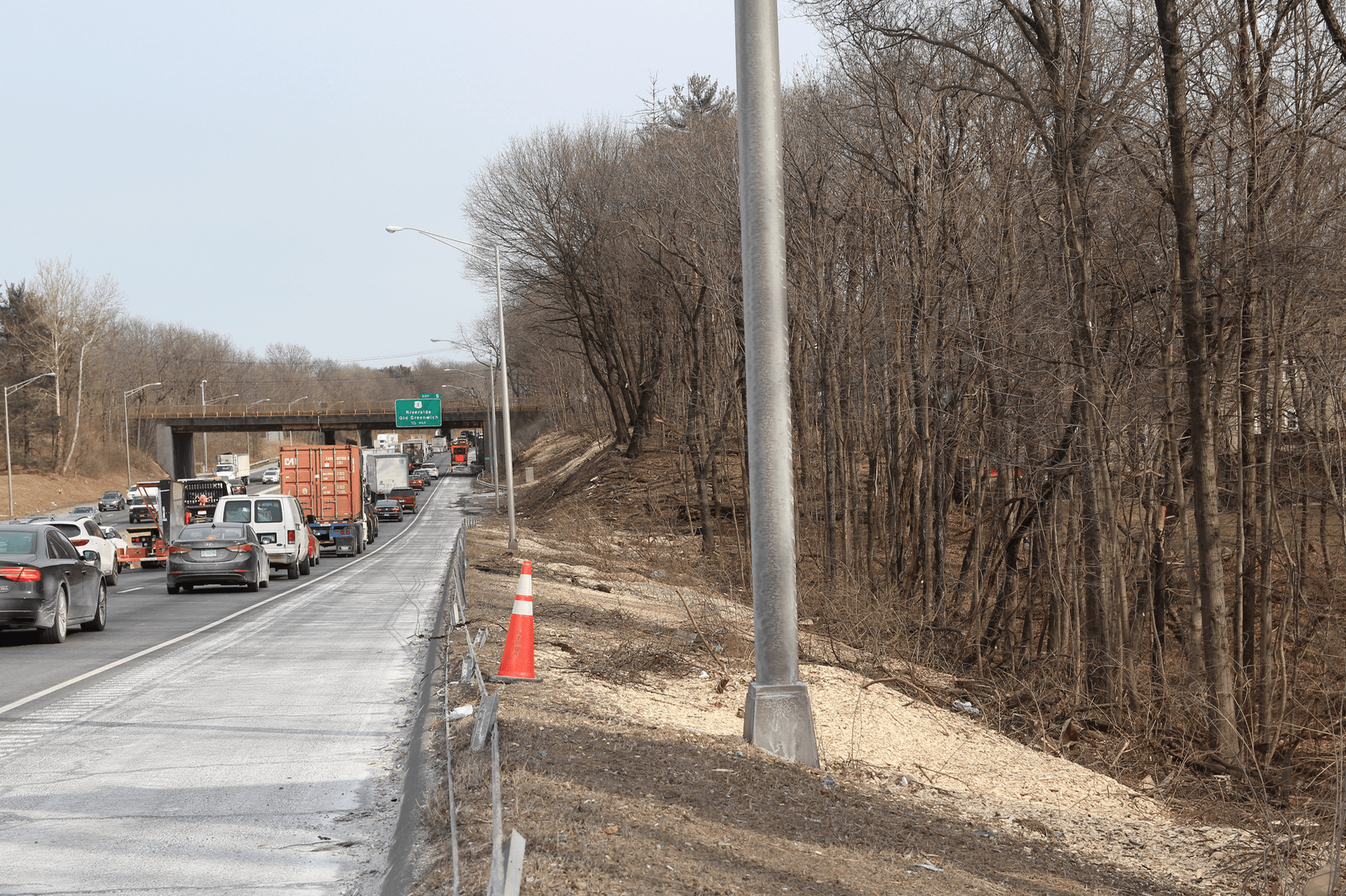 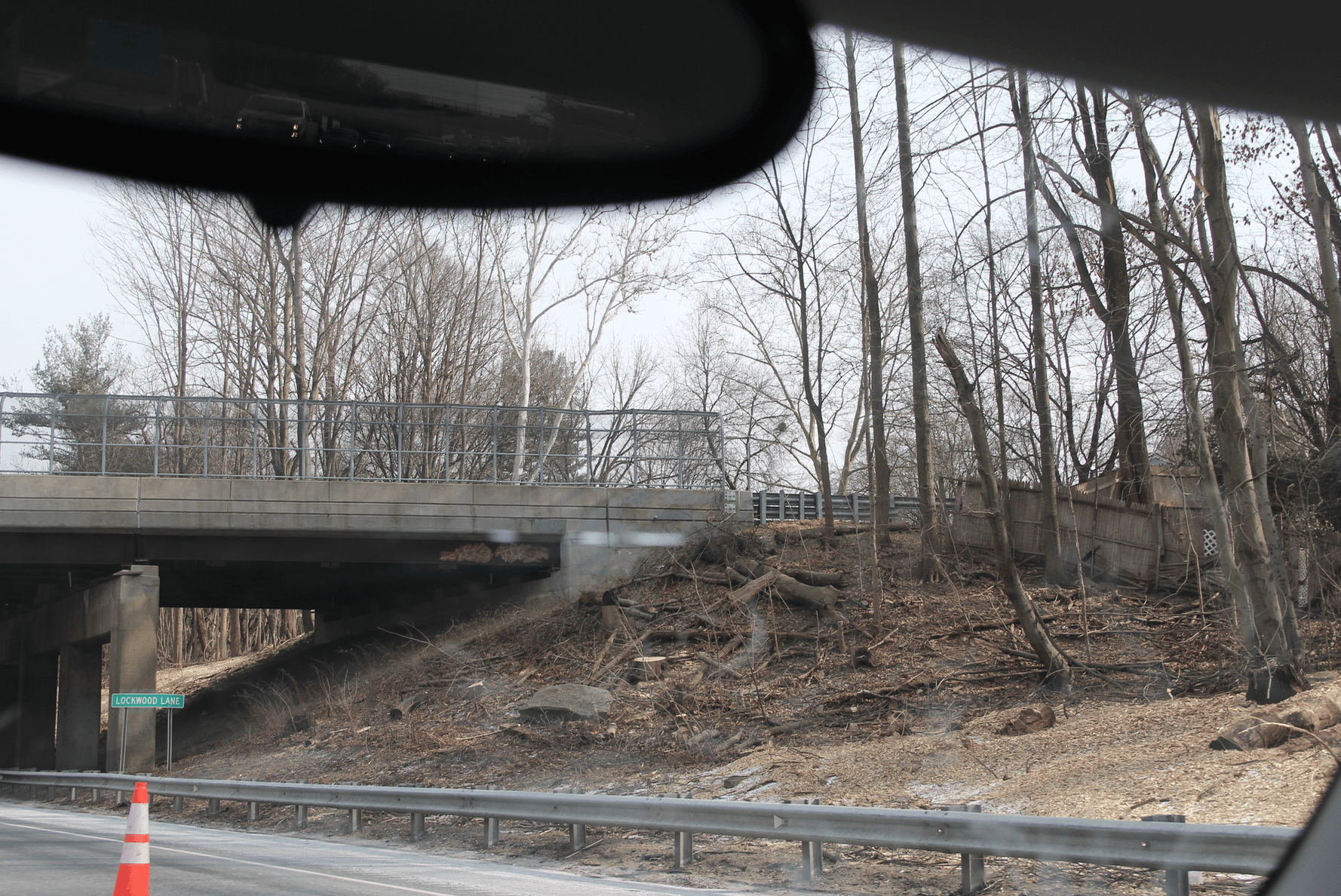 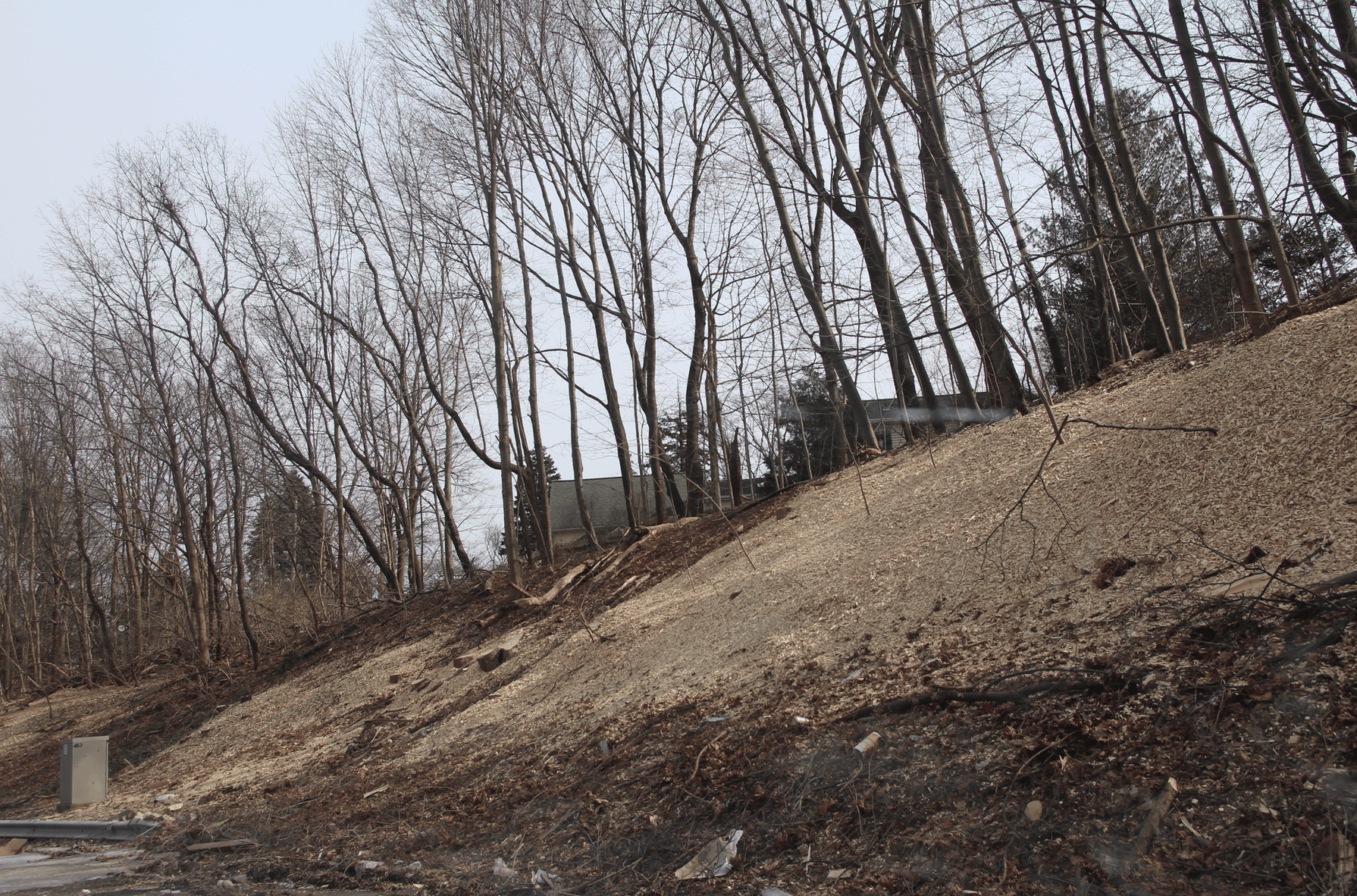