Lifelong Democrat Sanford Litvack, who goes by “Sandy,” moved to Greenwich in 2005 and in 2006 married Joanna Swomley, who recently founded Indivisible Greenwich, a non-partisan, issues-focused, grassroots organization opposed to the Trump agenda. The couple were accompanied on Wednesday at town hall by their three boys Chris, Jamie and Tyler.

Asked whether he appreciated the different skill set required to work in government versus the corporate world, Mr. Litvack said that, indeed, he understood the difference, and possesses multiple skill sets.

In 1979, Litvack, who went undergrad to UConn and graduated Georgetown Law School, was nominated by President Jimmy Carter to be the Assistant Attorney General in charge of the Antitrust Division at the Dept of Justice, where he was responsible for the development and enforcement of antitrust policy for the US.  He said in that capacity, he learned how to work with Congress.

“It’s one thing to run a company,” Litvack said. “You just tell people what to do and it gets done. That’s not how you operate in government. It’s quite different.”

Asked why he was running, he replied, “I’m running because I don’t believe anyone should run for an office as important as First Selectman unopposed. I believe competition makes us sharper, better, focused – and it makes us answerable.”

Second, he said, “Any you time you live in a job a decade or more, you become lax, complacent and same-old-same-old,” he said. “We need new thoughts and a new approach.”

“What am I going to offer that’s different?” he said. “Everything.”

Litvack said that as assistant attorney general in the Dept of Justice, he supervised hundreds of attorneys. He oversaw the dismantling of AT&T, which he said taught him how to work with Congress, lawyers and, staff.

After leaving DC, Litvack returned to private practice in New York, working at two law firms, and serving as chairman of one firm. Most relevant, perhaps, Litvack said he spent a decade at Walt Disney Company in California beginning in 1991, where he became involved in a wide range of issues.  “Whether it was where to open a theme park, whether to open a theme park, whether it was what new media to enter,” he said. “And, one of the more difficult times of my life, which was trying to reorganize Euro Disney. That turned out to be a big bust.”

Litvack said that at Disney he also oversaw with numerous partnerships. “I dealt with bringing in the Googles and the Microsofts and the AT&Ts in the world.” He oversaw Disney’s acquisition of ABC and ESPN, and other companies.

“That is relevant because I know what makes the economy work. I know how to do it,” he said. Litvack said that although Greenwich is a great town and great place to live, it was for years buoyed by being the “home and haven” of hedge funds.

“Hedge funds have started to contract,” he said. “It’s important for us to go out and attract new businesses. I know how to do that.”

“It’s time to resuscitate and reinvigorate Greenwich. I heard a rumor I might not be the favorite, but if 2016 taught us anything, it is that the favorites don’t always win.” – Sandy Litvack, Democratic candidate for Greenwich First Selectman

Litvack said he intends to go door-to-door talking to voters, but needs help.

“I don’t know people. The current First Selectman knows  everybody and has the Republican majority party behind him.”

Litvack promised to work hard and run an honest race. “I don’t do things to lose. I want to win, desperately,” he said.

Greenwich Democrats also endorsed Drew Marzullo for a fifth term as Selectman. Marzullo, who also formed an exploratory committee for a run for Lt Governor of Connecticut, is on his way to raising $75,000 required to qualify for state campaign funding.

“There was a teenager who left home destined for Northeastern University. Like many freshmen headed for college, this freshman didn’t have any sense of direction,” he said. “For the first time this teenager experienced what it was like being an openly gay male. And it wasn’t until this teenager at 21 came back to Greenwich that he began a career on an ambulance.”

“I stand before you tonight with humility and gratitude and I feel tonight like that teenager, who in 1992 put on a stethoscope and rode an ambulance for the first time,” Marzullo said. “The energy back then is the same energy I have now.”

Marzullo said that as Selectman he has dissented when necessary. “We Democrats  have a responsibility to challenge, call out and fight when necessary.” 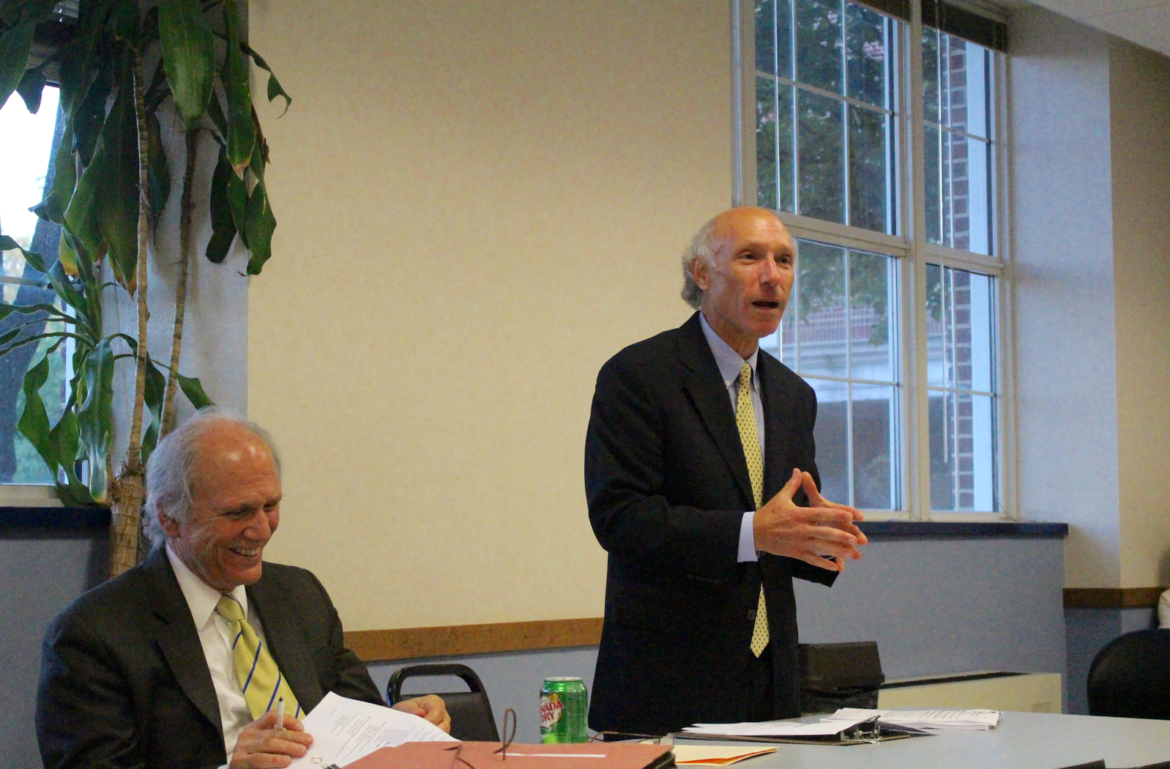 Howard Richman was endorsed as candidate for Tax Collector and will reprise his 2015 challenge against Tod Laudonia.

Richman, who ran in 2015 on a promise to eliminate the job once he was elected, said, “I really to truly believe this town needs an appointed, professional tax collector instead of an elected political patronage tax collector.”

Richman vowed to work with the BET, “a hell of a lot better than the current tax collector does – therefore hopefully earning some good will and maybe…restore some of what has been taken away, which was originally supposed to be from his salary.”

Greenwich’s elected Tax Collector, Tod Laudonia, has repeatedly bumped heads with Democrats on the Board of Estimate & Taxation, which cut the Tax Collector’s office budget by $50,000, an amount that was intended to represent a pay cut to Laudonia. Instead, two staff members out of six were laid off and replaced them with temporary and part-time workers.

“There was certainly no excuse for not getting work done because two people had to get laid off,” he said.