The event, one of a number across the country was billed as “Reject the Coverup.” It was attended by about 75 people, including State Rep Steve Meskers (D-150).

Indivisible, which was originally formed to protest President Trump’s agenda after he was elected in 2016, held the event just after the Senate’s acquittal of President Trump on charges of Abuse of Power and Obstruction of Congress.

On Article 1, Abuse of Power, Mitt Romney, the last Republican nominee for President, defected from his party, joining 45 Democratic Senators and two Independents to convict the President However, 67 votes, 2/3 of the members present, were required to remove the President from office. (48 voted guilty and 52 voted not guilty.)

On the second article, Obstruction of Congress, all 53 Republicans including Romney, voted not to convict. The vote was 47 to 53.

On the front steps of Greenwich Town Hall, Joanna Swomley, one of the founders of Indivisible Greenwich, shared remarks from US Senator Richard Blumenthal and US Congressman Himes, who she quoted saying, “I voted my conscience and voted for two articles of impeachment. The House, led by Speaker Pelosi, upheld the rule of law and defended the US Constitution. Meanwhile, the Senate, for the first time in US history held an impeachment trial without calling a single witness – even willing witnesses with credible information.'” 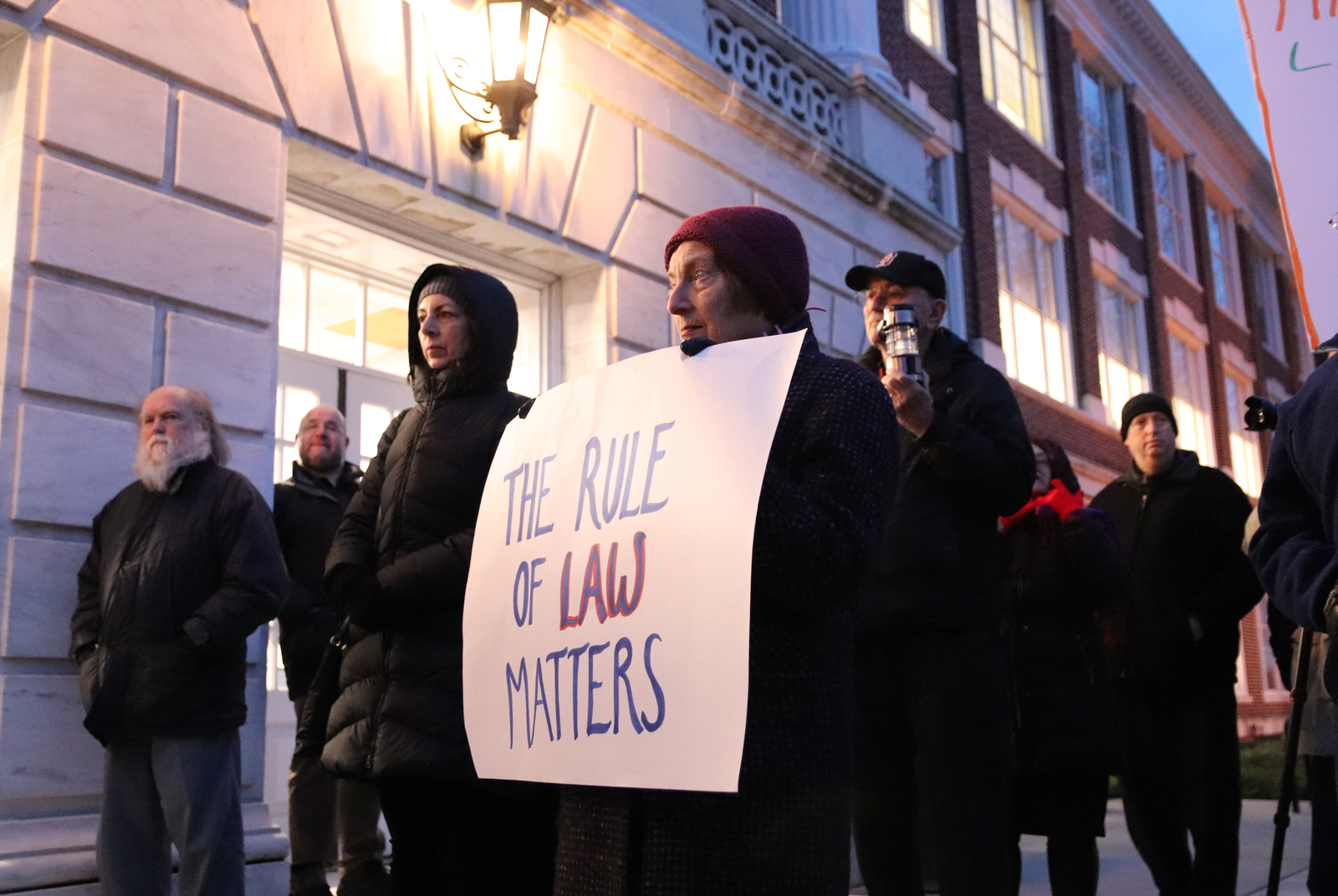 “Mitch McConnell’s Senate has created a dangerous shift of power to the Executive Branch that will haunt our nation for decades to come.” – US Congressman Jim Himes

“Disappointing does not even begin to describe this day. But the way forward is clear. We must put forward all efforts to ensure that Donald Trump is not re-elected and that we take back both the Senate and the White House this November,'” Swomley quoted Himes saying. “November 3, 2020. Write that down. Work toward it. We cannot afford four more years of a Trump Presidency.” 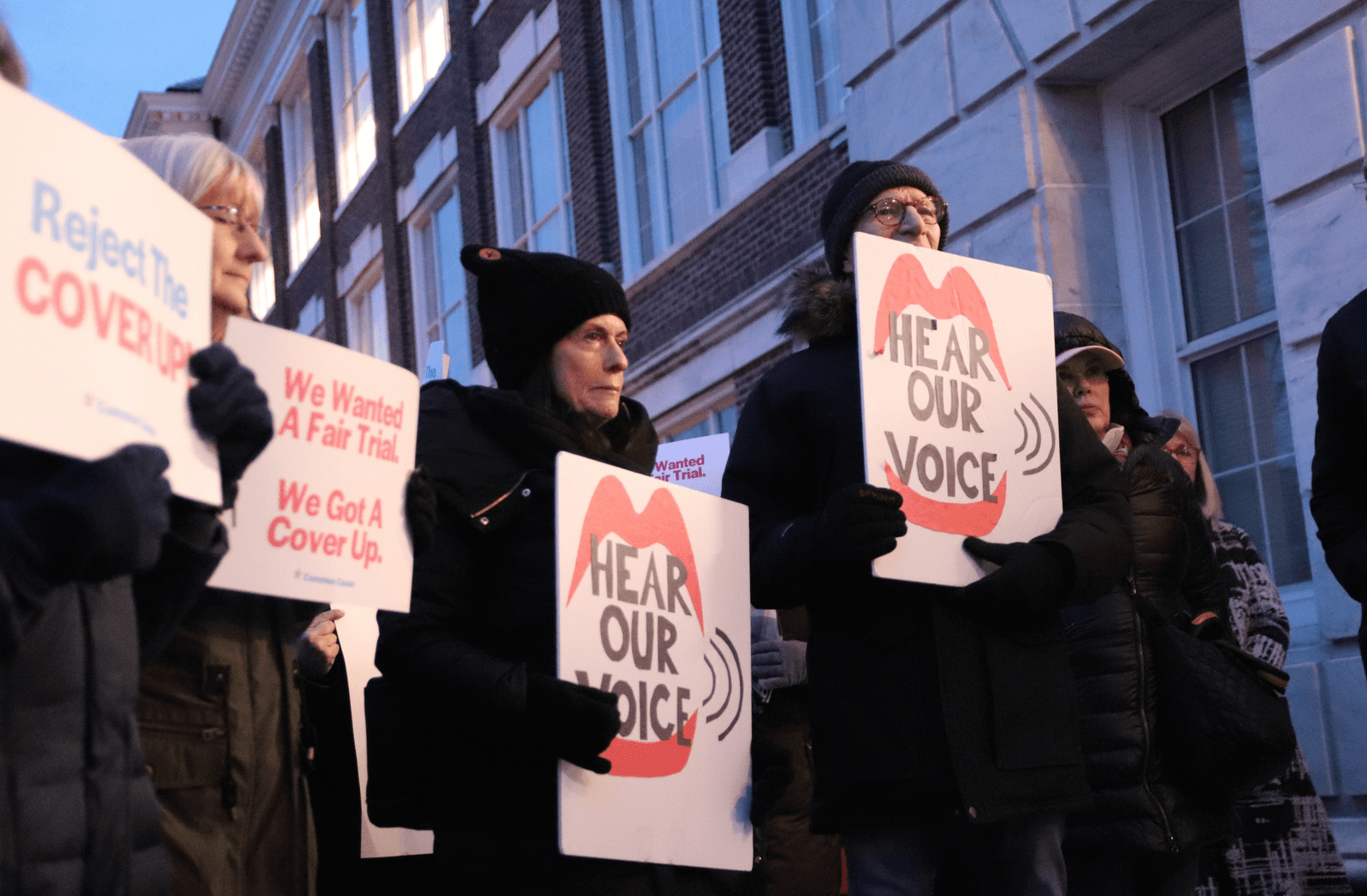 Of the third impeachment in the history of the United States, Congressman from California Adam Schiff, whose remarks were read by Susan Sabreen, noted President Trump’s was the first trial without witnesses or documents.

“How did we get here?” Sabreen quoted Schiff asking. “You’ve seen overwhelming evidence of the President’s guilt. Donald Trump withheld hundreds of millions of dollars from an ally at war – and a coveted White House meeting with their President  – to coerce or extort that nation to cheat in our election.”

Sabreen quoted Schiff saying the President fell back on “a theory of presidential power so broad and unaccountable that it would allow any occupant of 1600 Pennsylvania Ave to be as corrupt as he chooses.” 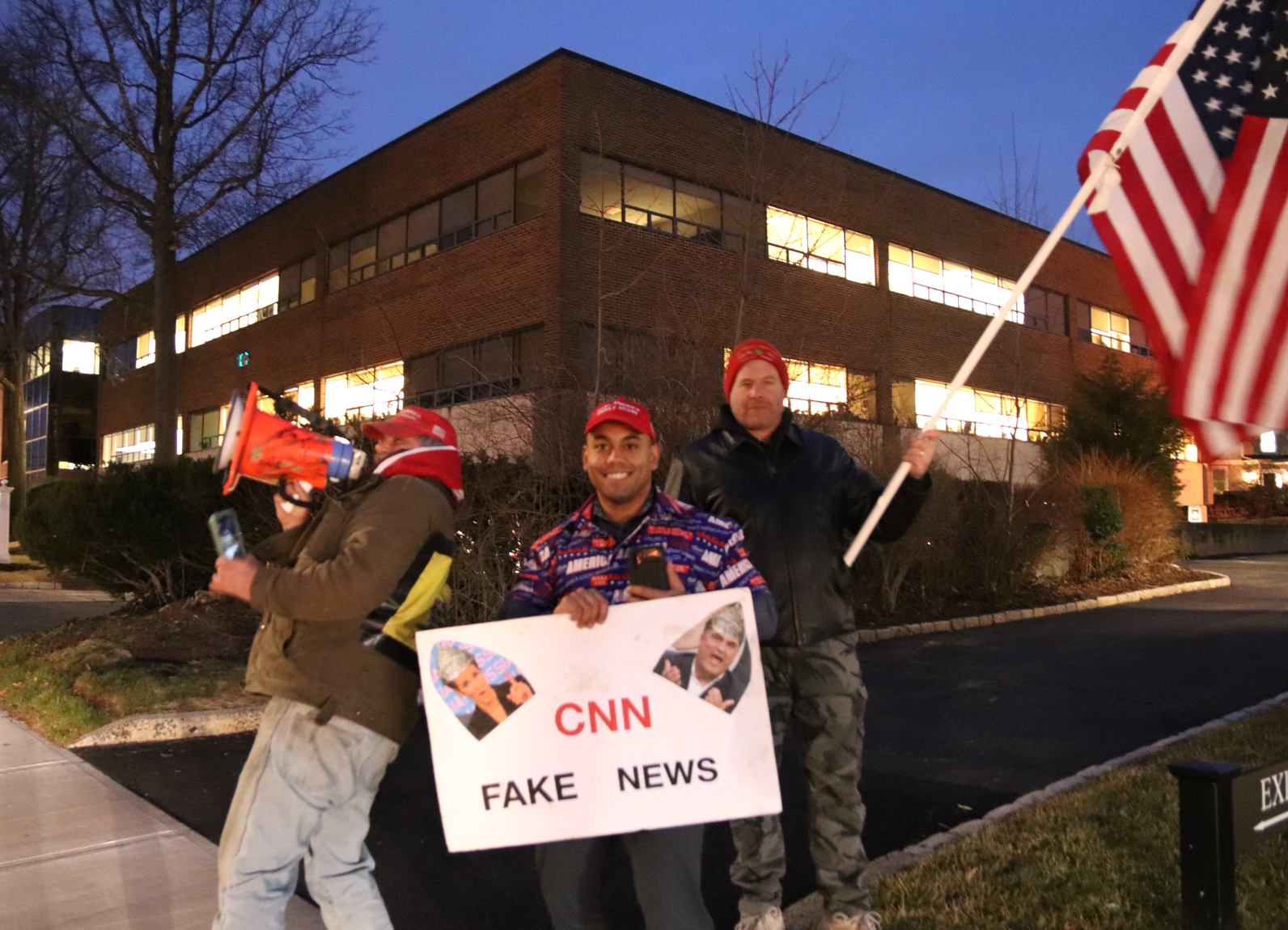 Pastor Paul Juchniewich with a safety cone over his bullhorn, Alfred Esposito and Joe O’Boy, all residents of Norwalk. Feb 5, 2020 Photo: Leslie Yager

Across from Town Hall on Field Point Rd, three men in red ‘Make America Great Again’ hats had a bullhorn and chanted, “Bill Clinton was a Rapist,” “Democrats kill babies,” and “Nancy Pelosi is a moron.”

Paul Juchniewich who identified himself as a Pastor from Norwalk, was joined by Joe O’Boy and Alfred Esposito from Norwalk.

At times it was difficult to hear the Indivisible speakers over the protesters, who received honks of support and thumbs up from some drivers on Field Point Rd.

Mr. Juchniewich and Mr. Esposito said they both had served in the military.

“How about peace with North Korea? How about let’s pull everybody people out of Afghanistan, but the Republican deep state, which are just as bad as the Democrat deep state, don’t want to leave Afghanistan, so we have to leave a little people in there,” Juchniewich said.

“Let’s stop this nonsense, Middle East war business and give peace a chance,” he added.

“We’re coming out here giving some resistance. We’re the dirty road crew,” Juchniewich said, holding up his loudspeaker which was inside an orange safety cone.

“We’re here to support Trump 2020. This is a coup,”Juchniewich said. “They’ve been trying to impeach him since he got elected. Why?” 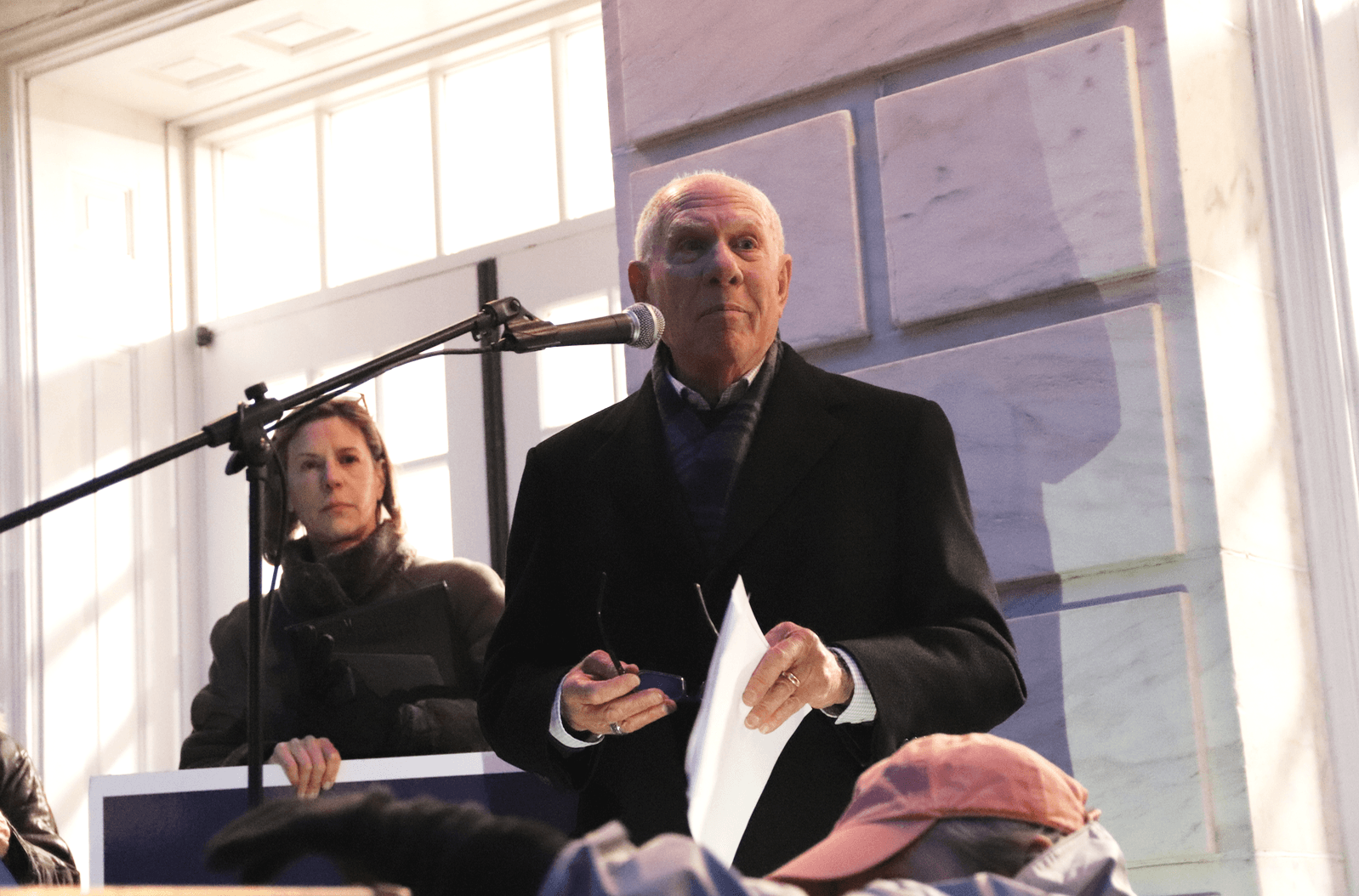 Back across the street, former Greenwich Selectman, Democrat Sandy Litvack said, “One can debate the wisdom of ever having initiated a process whose outcome was predetermined before the so-called trial ever started. Knowing the result was preordained, some would have questioned that decision. And more than one could lament the naivete in believing that Republican members would abandon Mitch McConnell and the President, even as he absurdly claimed that his actions were ‘perfect.'”

Litvack said, “No one can debate the consequences that will flow from the Senate turning a blind eye, to ignore the wrongdoing they know occurred and fail to do their jobs. You don’t have to be a lawyer to know the proceedings in the Senate were not a trial,” he said. “The plain truth is that the facts were, are and will remain undisputed. the President of the United States used his office to coerce, cajole a foreign country to investigate an American citizen. No one seriously disputes that.”

Toward the end of he event, the Indivisible group chanted, “Hey hey ho ho, Donald Trump has got to go,” and, “The People united will never be defeated.”

Lastly they chanted, “We will remember, come November!”

After the rally, Indivisible Greenwich co-founder Joanna Swomley, said, “It’s a sad day. It’s important that we continue to show up.”

Meeting schedules, and additional information about the group, can be found on the IndivisibleGreenwich.org 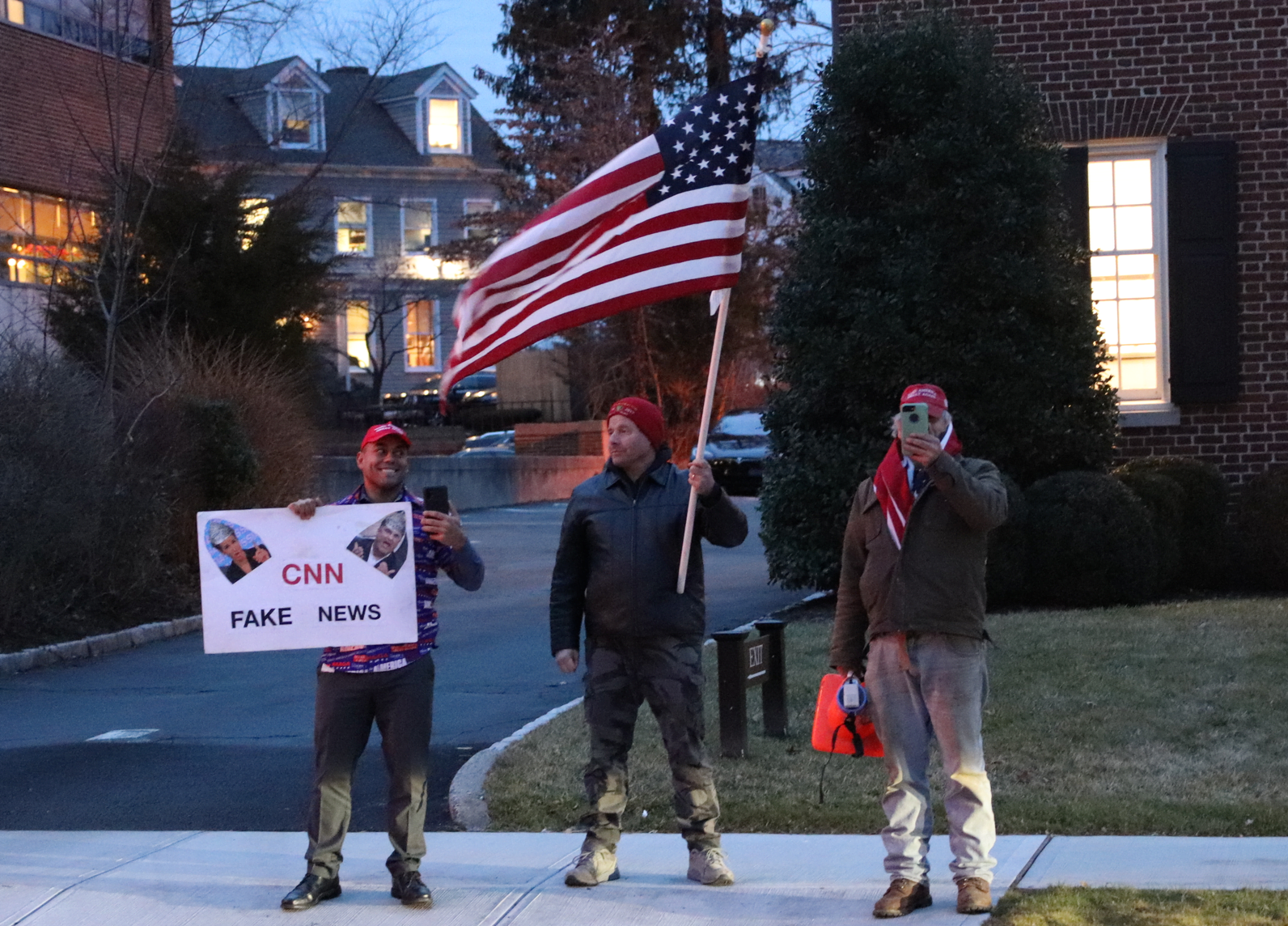 Pastor Paul Juchniewich with a safety cone over his loudspeaker, Alfred Esposito and Joe O’Boy, all residents of Norwalk. Feb 5, 2020 Photo: Leslie Yager