At Thursday morning’s Board of Selectmen meeting, Peter Tesei gave a snapshot of where the Town stands vis a vis the Greenwich Reform Synagogue’s stalled plans for a new house of worship at 92 Orchard St in Cos Cob and their federal lawsuit, putting it into context of not one, but two other lawsuits.

He said that a joint meeting, to be held in executive session, of both the Board of Selectmen and the Planning & Zoning Board of Appeals, was scheduled for Thursday night at the recommendation of the Town legal department. The meeting was held in the Cone Room at Town Hall, but was closed to the public.

“It is a meeting that the Town legal department has recommended be held for both boards to hear concurrently the implications of the most recently filed federal lawsuit as a result of the ZBA’s denial of approval for the application of the Greenwich Reform Synagogue,” Tesei said.

“It is important to know for the public record that we’re talking about three different lawsuits,” Tesei said. “Presently the town has had a lawsuit filed by residents against Inland Wetlands and Watercourses Agency for approval of the application for the Greewich Reform Synagogue.”

Tesei said the second lawsuit is one filed by residents against the Planning and Zoning department for approval of the preliminary site plan of the Greenwich Reform Synagogue. 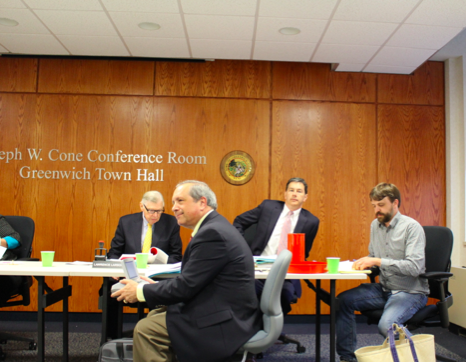 ZBA members and town staff at the June meeting that resulted in denial of the Greenwich Reform Synagogue’s proposed plan for a house of worship on Orchard St in Cos Cob. Credit: Leslie Yager

“And now, of course, we have the Synagogue filing a federal lawsuit, which has much more far reaching implications because of the way the federal law is written and what discretion it gives a federal judge,” the First Selectman said.

“As it was explained to us, when people don’t prevail at local land use agencies, they often wind up  in superior court and there is an ongoing process by which the plantiff and defendant attorneys negotiate a settlement on those matters, which often are not relevant to our board’s activities.”

On June 11 the ZBA, after over four hours of discussion, Lawrence Larson proposed a continuance of the hearing, but was voted down. Then, well after midnight, ZBA member Ken Rogozinski made a motion to deny the application. The five board members voted 2 to 2, with one abstention.

Next, ZBA chair, Patricia Kirkpatrick suggested the ZBA vote instead to approve the application. Again the vote was 2 to 2, with Lawrence Larson, who had wanted to continue the hearing, chosing to abstain. The net result was that the application, by default, was denied.

“Because it is a federal action and it doesn’t impact the Town more broadly — because of the potential for damages against the Town of Greenwich — that is why the Board of Selectmen is involved.”

At Thursday morning’s sparsely attended public meeting of the Board of Selectmen, attended mostly by reporters, Tesei said both his board and the Town’s legal department are taking the matter seriously. “It’s not something the town has ever been confronted with before,” he added.

The final agenda for the P&Z meeting on July 29th has been amended to reflect the applications from Greenwich Reform Synagogue have been postponed to Sept. 10.