UPDATE Monday pm:  Governor Lamont said  hair salons will be allowed to use blow dryers when they reopen on May 20, after pushback from salon owners. Initially blow dryers were excluded from the reopening of salons due to fears they would disperse coronavirus germs.

Original story: The first round of Connecticut business reopenings is set for May 20, and Greenwich Hospital, like restaurants and salons will look different.

Diane Kelly, COO of Greenwich Hospital, said the hospital’s plan is to slowly and cautiously open up some outpatient services that had been closed.

But things will look different.

“We’ll be changing how we do some of our waiting areas and making sure no one enters without a mask,” she said.

For example, she said, “You’ll see plexiglass in some areas where there are conversations when people check in.”

“It will be a changed environment,” she added. “I’m worried people will think that we can go back to the way it was. That is not in our future.” 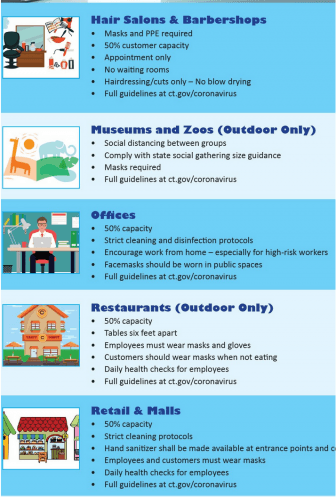 On May 20 four sectors of business will be allowed to open, including restaurants, personal services, retail, and offices.

Restaurants will be allowed to offer sit-down service, but only at outdoor tables, and patrons will have to be spaced six feet apart from one another.  Contactless payment will be encouraged with disposable paper menus or menus on a wall, with a focus on eliminating touch points.

Camillo said he’d been meeting with town departments including Health, Planning & Zoning, Police and Fire on how to ensure people will be safe.

“We’re looking at a concept that may enhance business districts on the other side, and things that can carry over,” Camillo said, adding that there will be additional announcements on Wednesday.

Camillo said the reopening of town hall, on a limited basis, has been pushed back.

“It will be a partial reopening around June 1, and a system where people can come in safely. But we’re not ready to release all the details yet,” he said.

As for parks and beaches, he said the partial reopening had gone smoothly, with one exception. 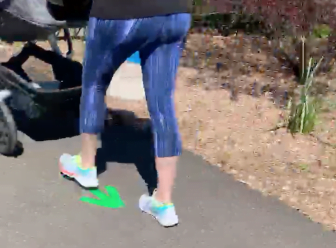 Guest at Cos Cob Park where the only entrance was marked with arrows as an exit. Contributed photo

“We were going to put arrows for the direction of walking, but that was not done,” Camillo said. “We hope to get that done this week so people are not crossing each other in different directions in close proximity.”

Camillo said there have not yet been discussions about the possibility of running the town’s ferries this summer, but that that doesn’t typically start until June anyway.

He said there were also discussions about accommodating adult children who have moved home to Greenwich during the pandemic, in order that they can have a summer beach pass.

“We’ll figure out a way to allow former residents who are now back in town where they grew up to use our facilities,” Camillo said. “They may not have a Greenwich address on their licenses. We want to make sure whatever we do has integrity and isn’t easily manipulated. It’s going to be a very fair system.”

“As of now you can use 2019 beach passes,” he said. “Residents can also get in to the beaches with a driver’s license with a Greenwich address.

Asked what the beach might look like if the town allowed some peole to sit in the sand, especially when the temperatures rise, Camillo said, “We’re looking at lots of things. In Spain they’re looking at reservations. You hate to have the whole summer go by with no one able to sit on the sand, but it’s not going to be like it was in the past.”

“If we did, it would be measured. It would be spaced out and monitored,” he said.

Greenwich Hospital’s COO Diane Kelly said that as of Monday there were 43 COVID-19 patients being treated in different units at the hospital, with 451 patients discharged, and 5,752 people tested at the hospital’s outpatient test site with 1,786 testing positive (people from Greenwich and other towns).

A total of 42 Greenwich residents have died from COVID-19, according to the town Health Dept.

Ms Kelly said that with hospitalizations way down, the staff are “taking a tiny breath.”

“Our staff are starting to feel some relief,” she said. “They’re also feeling very encouraged. More patients are being discharged, and they’re feeling some sense of accomplishment.”

“We are working around the clock trying to figure out the new world order,” she said, adding that reopening will be far more complex than shutting down.

“The added pressure is that everyone wants it now,” she said. “That could be the worse thing we do. We are excited, but know we have a lot of work ahead of us.”

“The collaboration withing the nursing division was quite remarkable,” she said. “They were willing to go whether the needs of patients were.”

the nurses deployed from Yale New Haven Health System’s hospitals in New London and Westerly, RI were deployed back to their hospitals about two weeks ago.

“We deployed nurses not only back (to Lawrence + Memorial and Westerly), but had some additional nurses we had hired as travelers, and deployed them to other places,” she said. “We sent some nurses to Bridgeport when they had high ICU numbers.”