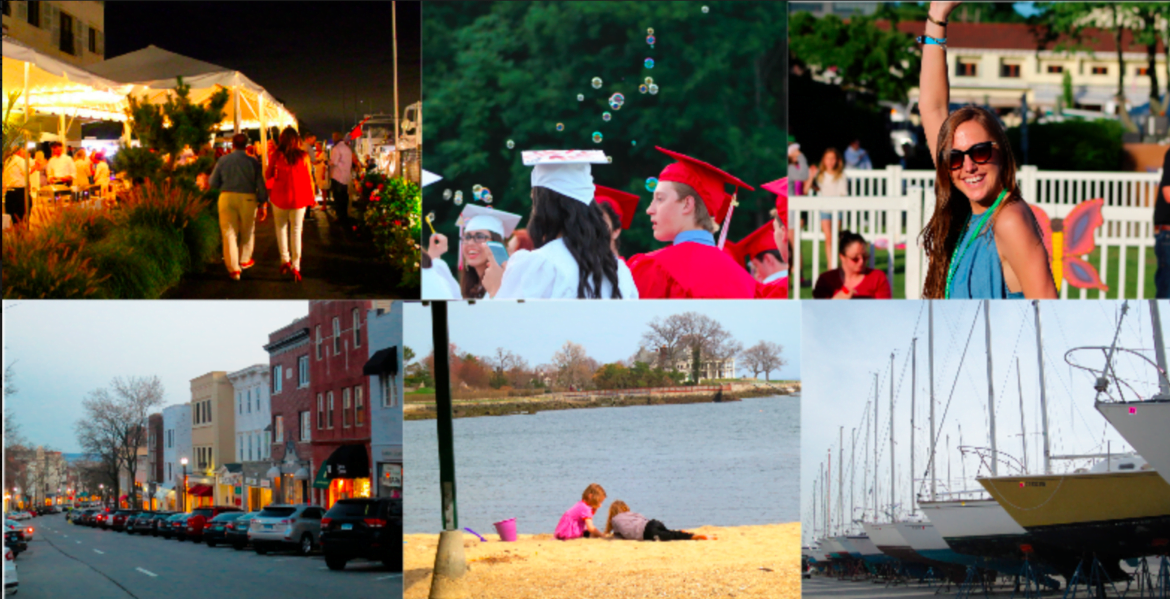 Jan 12. This article has been updated. It originally stated that the Think Greenwich Twitter had retweeted posts from Greenwich in the UK and Greenwich Village. That paragraph has been deleted.

Four months into the Greenwich public relations campaign being executed by New York City based Lou Hammond Group, many are wondering about results.

In one of the biggest Greenwich business stories of 2017, the Town pitched in $30,000 toward the $120,000 effort. Approval of the $30,000 squeaked by in May with a single vote in the RTM. The yearlong contract with the PR agency was approved and commenced on Sept 4.

The idea for the initiative sprung from the First Selectman’s Economic Advisory Committee, who saw presentations from several PR agencies before picking Lou Hammond Group, who touted their experience promoting municipalities.

During discussions at hearings on the budget, those in favor of the PR campaign referred to the declining presence of hedge funds in Greenwich, empty store fronts on Greenwich Avenue and inventory of unsold houses particularly in back country Greenwich. They also spoke of the damage done by Starwood Capital’s Barry Sternlicht’s infamous comment, “You can’t give away a house in Greenwich.”

Robin Kencel, a local realtor who is a member of the First Selectman’s Economic Advisory Committee, said the PR effort was launched in September following five months of fundraising.

Four months in, Kencel said the campaign, named “Think Greenwich,” has issued a dozen press releases with the goal of scoring a feature story about Greenwich in a top tier publication such as the Wall Street Journal.

Reached by phone on Tuesday, Kencel said the effort was going along very nicely.

“Trying to get into ‘A-List media’ takes six to nine months due to their lead times,” she said. “But every month we’re sending out press releases.”

Through Lou Hammond, there is a visit in the works from Lux Magazine at the end of January, though the guests will not be chaperoned.

“They’ll come on their own,” she said. “We’ll find out what their interest is. We’ll make a match so that so they can get a good feel. We’ll give a list of suggestions.”

Kencel said the agency is tracking results on social media and responses to press releases. They are using the previous PR campaigns for other municipalities as benchmarks, and report that results at this early point in the campaign are on par.

On Wednesday, during a regular meeting of the First Selectman’s Advisory Committee, Kencel and Sabine Schoenberg said they are in touch with the PR agency on a daily basis.

“We are all hoping for a big story in a top tier publication,” Kencel said. “We only started on September fourth.”

Kencel explained that Greenwich needs something newsworthy to earn a major feature. “You’ve got to have some news. You can’t just say look at us, we’re great,” Kencel said on Tuesday.

On Wednesday she suggested the upcoming China Conference might be newsworthy for a feature story in an A-List publication.

“We’re one of the few towns with a PR effort without an economic development office,” Kencel said. “That would really take this to the next level. We’d have someone sitting there advancing it every day.”

In addition to pitches to A-List publications, which Kencel and Schoenberg said has been expanded out to the next tier, Loud Hammond Group has established Instagram, Facebook and Twitter accounts on behalf of Greenwich, all named “Think Greenwich.”

“They’re saying the number of followers is ramping up consistently on a par with the other municipalities,” Kencel said.

The agency is also populating the social media accounts with links to events, restaurants, and businesses.

Paul Settelmeyer asked about inviting the agency to a meeting in Greenwich to present their results. Kencel and Schoenberg advised against using up billable hours to have Lou Hammond make the trip. “We are really stretching our time with them,” Schoenberg said. “They are already giving us more time than they’re allotted for. We want to focus them on interviewing people we suggest.”

Kencel said that a second year of the PR campaign would be an extension of the existing strategy. “Year two won’t be dramatically different,” she said, adding that fundraising will be necessary.

Settelmeyer reminded the group of the narrow vote in the RTM and suggested that if the First Selectman Tesei puts money into the budget for next year to extend the PR campaign that the committee should have talking points to support the effort. “I’m hearing mixed reactions,” he warned.

“Our expectations have to be managed,” said EAC member Tammi Kettler. “This is not a multi million dollar marketing campaign. New Haven has marketing, public relations, and an economic development office.”

Jim Aiello said it would be great to get the community more involved in the social media channels by contributing photos and stories. He suggested running a contest. “We don’t’ have that critical mass,” he said.

The group was in favor of a contest, and Tammi Kettler said it wouldn’t cost anything.

The meeting also featured a presentation by Planning & Zoning director Katie DeLuca who explained Greenwich’s newly launched Plan of Conservation and Development (POCD) process, which is undertaken once a decade, and won’t be completed until May 2019.

“We’re losing our geographic advantage. What makes us so special? We have parks, we have shopping, but so do others,” DeLuca said. “We have an amazing amount of public art. It’s so clearly the answer to me. If we could promote that, it could be key in our community.”

While much has been made about the exodus of hedge funds in Greenwich, DeLuca asked, “We wonder how did we get the hedge funds? Did we say, ‘We have the best business incentives?’ No, it’s because we have a great community. That’s place making.”

DeLuca said the POCD is about moving forward with place making, feeding off the assets of the community.

Indeed, Greenwich residents know what those assets are. Maybe the EAC should run a contest asking for essays from residents that are testimonials to what is great about Greenwich.