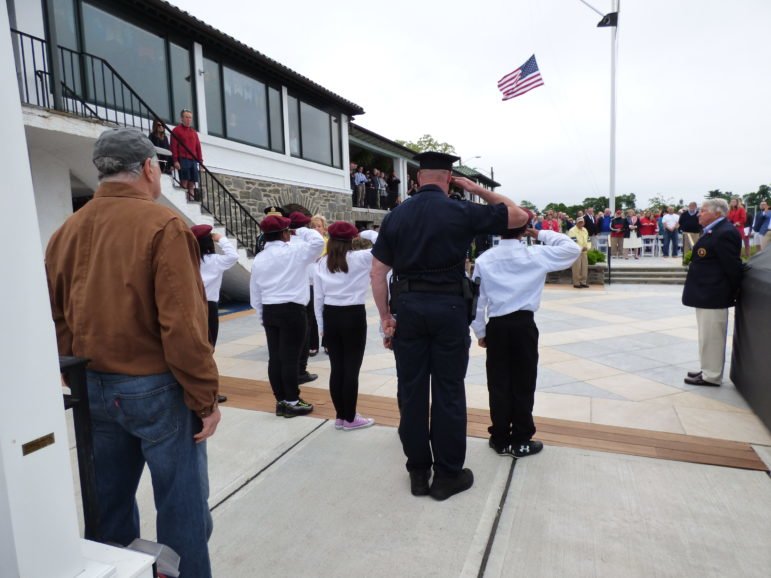 It was a gray Monday morning, but that didn’t stop a crowd from gathering at the Greenwich Indian Harbor Yacht Club for the annual Wreath Laying Ceremony.

Veterans and members of the armed services were there alongside the Greenwich Police Dept Color Guard and the Boys and Girls Club Honor Guard. Representative Jim Himes was also present.

Opening remarks were given by Peter LeBeau, Commander of American Legion Post 29. Administrator of the Small Business Administration Linda McMahon and First Selectman Peter Tesei gave short speeches in which they emphasized the sacrifice of service members in defending the US Constitution.

Senator Richard Blumenthal spoke next, saying, “This ceremony for me has always been a very special reminder of the need to continue to protect our freedoms, the need to honor with action the men and women who have sacrificed and given all so we can have these special freedoms.”

Blumenthal hailed keynote speaker Medal of Honor recipient Captain Paul Bucha for his work in the government and noted a need for “real action” in the form of better “healthcare… job opportunities, and skill-training” for living veterans.

Captain Paul Bucha, who attended West Point and was the captain of Company D, 3rd Battalion, 187th Infantry, 3rd Brigade, 101st Airborne Division in the Vietnam War starting in 1967, received the Medal of Honor following his heroic acts between the 16th and 19th of March, 1968.

According to the Medal citation, Bucha aggressively and courageously led his men in the destruction of enemy fortifications and base areas and eliminated scattered resistance impeding the advance of the company.

In one of many acts, “Captain Bucha, with complete disregard for his safety, moved to the threatened area to direct the defense and ordered reinforcements to the aid of the lead element. Seeing that his men were pinned down by heavy machine gun fire from a concealed bunker located some 40 meters to the front of the positions, Captain Bucha crawled through the hail of fire to single-handedly destroy the bunker with grenades.”

In his speech, Captain Bucha noted that he was not wearing his Medal out of respect for the 10 members of his Regiment who died in Vietnam, as he did not want to speak for them.

Noting the poor backgrounds of many of his men in Vietnam, Bucha used his platform to advocate for civil rights, with a nod to the present day silent NFL protests of racial inequality during the US national anthem.

“My men made it very clear to me that they were not lucky… and I was reminded of who my men were, and where they might stand or kneel today,” he said.

Bucha also mentioned a need to respect and help veterans beyond the mere “13 seconds” it takes to thank them for their service, before ending with with a call to action to “make our place even better than it was yesterday.” The speech was met with a standing ovation.

The members of the Boys & Girls Club, led by Lt Rick Cochran, filed onto a police boat and tossed the wreath into the water, after which shots were fired by the Byram Veterans Association.

The ceremony was followed by a Continental Breakfast at the Yacht Club.